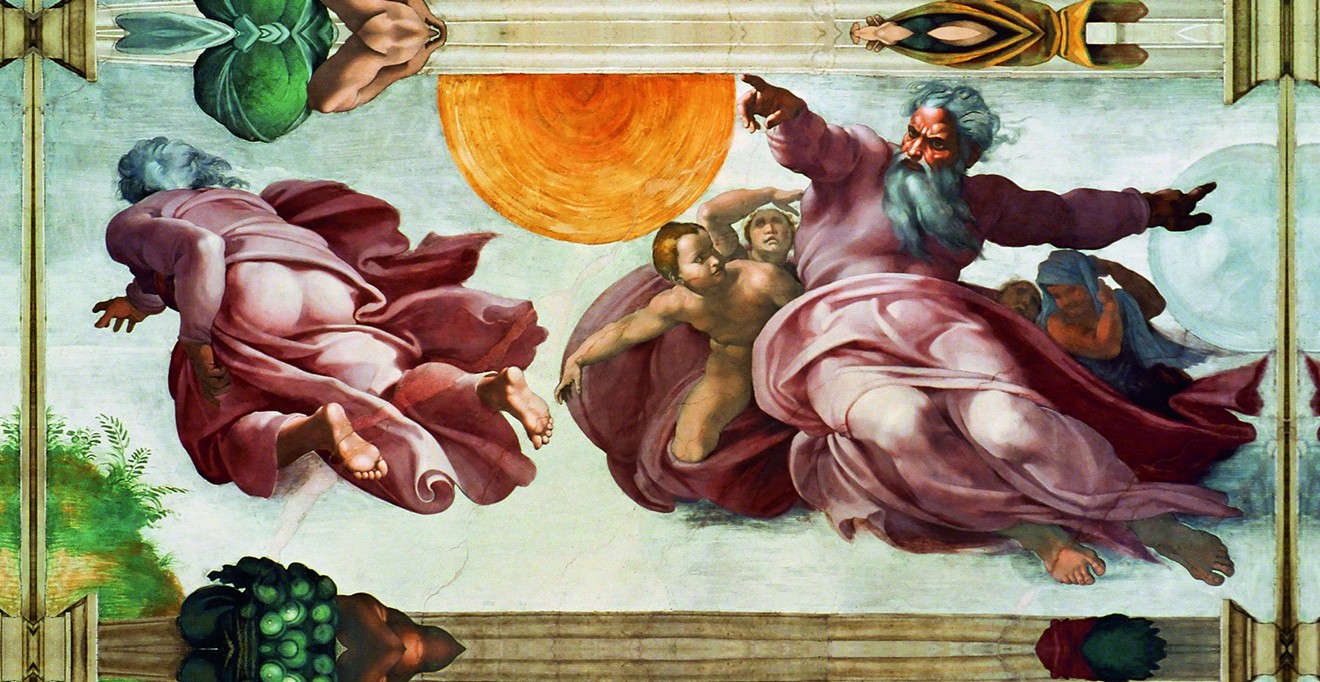 "The Creation of the Sun, Moon and Plants" could be the first case of mooning in a painting. SnowGlobe PR
The announcement that Michelangelo's Sistine Chapel: The Exhibition was coming to the Cherry Creek Shopping Center promised that it would be "unlike anything you'd see in Rome." Well, it got that right.

For starters, a visit to the real Sistine Chapel in Vatican City is a crowded affair. The exhibition of life-sized replicas of Michelangelo's frescoes in Denver, however, was practically empty on opening day, except for an older couple who'd traveled from Nebraska to see it. And it was eerily silent except for the stifled sound of the irritatingly perky narrator in the introduction video, who mispronounces the artist's name throughout. (No, it isn't pronounced like the Teenage Mutant Ninja Turtle's name.)

The road-show version of Michelangelo's Sistine Chapel, which debuted in 2021 in a former Sears store in Chicago, has taken up residence in a space that most recently hosted a tacky immersive experience based on the sitcom Friends. That was just one of many corporate-sponsored shows touting itself as immersive that's come to Denver this year, at a time when the city is already brimming with everything from experiential shows by local creators to David Byrne's Theater of the Mind to the Meow Wolf installation, Convergence Station, which opened in September 2021. Since then, Denver has been a center for all things immersive, with Immersive Denver even holding the Denver Immersive Gathering in early November for those in the art industry to see all of the city's idiosyncratic art offerings.

"Compared to other cities [the exhibit] has gone to, it seems like Denver just has a lot more. ... Like, this isn't going to compete with Meow Wolf," says a Sistine Chapel staff manager, who took on the post as a winter job and admits that he does not actually know much about Michelangelo's frescoes. 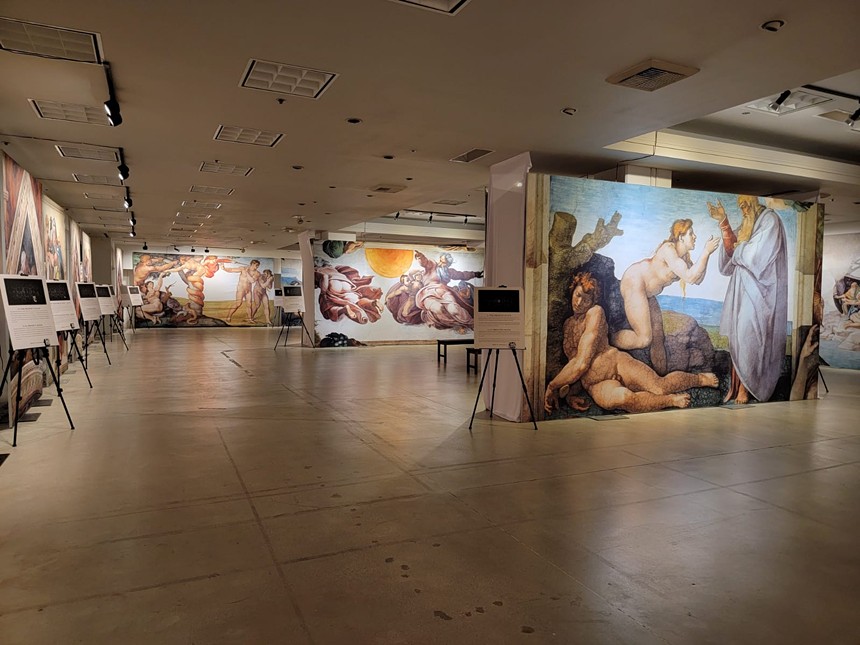 SnowGlobe PR
But then, who does? Outside of art historians, arty Catholics, and Renaissance and Michelangelo enthusiasts, the average viewer is unlikely to identify the significance of the work or even the inspiration for its subjects, such as the specific biblical imagery of the five Sibyls (Persian, Erythraean, Delphic, Cumaean and Libyan pagan women whom Catholics identify as prophets) that Michelangelo positioned between seven male prophets on the chapel's ceiling. And the audio guide and wall text don't provide much beyond surface information. But then, this show was produced by the touring exhibition company See Global Entertainment, which also mounted The Art of Banksy exhibit at the Denver Sports Castle.

Another way you know you aren't in Rome: You can view these large reproductions of Michelangelo's frescoes at eye level, seeing details that you won't catch in the tilted mirrors framing the floor of the real Sistine Chapel, positioned so that visitors don't have to crane their necks for long periods.

But seeing them up close also offers visual proof that Michelangelo really, really despised this project. A prominent sculptor, he never wanted to be a painter, and that's evident here. Writing a friend during the Sistine Chapel project, he confessed, "I am not in the right place — I am not a painter."

Particularly of women. Because of the lack of female models during the Renaissance — and perhaps because Michelangelo preferred the male form both in sculpting and in the sack — there are not many females in these paintings, and that's probably a good thing. The Sibyls and Eve look like musclebound linebackers with botched boob jobs.

While he couldn't really paint the female form, though, Michelangelo definitely understood the mentality of some women. In "The Creation of Eve," Adam is peacefully passed out naked in the grass, while Eve seems to be pleading and agonizing over something — "Why couldn't you have made it bigger?" — with God, who is giving her a stern look and making a gesture that often accompanies the phrase "You get what you get, and you don't get upset."

And although he might not have been much of a painter, it's clear that Michelangelo appreciated and enjoyed depicting a very round, voluptuous posterior, and his God has a particularly bouncy one. It's strangely on display in one of the more prominent frescoes, "The Creation of the Sun, Moon and Plants." God, wearing a fabulous clingy pink dress, confidently swoops from the right side of the painting with a determined glare and swinging arms. Then on the left side, he's seen flying off, giving everyone below a good look at his behind, which appears to have gotten a wedgie. Many historians believe that this is the first instance of mooning in a painting: specifically, God mooning Pope Julius II. He'd annoyed Michelangelo throughout the project, and, thanks to the artist's work, he'd now be conducting the sacrament of communion directly under a booty.

That piece isn't the only example of Michelangelo's sense of humor: An angel behind the Erythraean Sibyl appears to have his thumb in his mouth — not like a typical baby, but more in the fashion of an angry European sports fan gesturing to a competitor. SnowGlobe PR
Michelangelo definitely needed humor to get through this project, which he referred to as "torture" in a letter to friend (and possible lover) Giovanni da Pistoia. He worked on the ceiling with a team from 1508 to 1512, and he resented the task from the start. Italian architect Donato Bramante, who was building St. Peter's Basilica, was jealous of the genius and had persuaded Pope Julius to commission frescoes because he knew Michelangelo wasn't familiar with the medium.

Even so, Michelangelo went above and beyond: Although the pope originally requested he just paint the twelve apostles, Michelangelo ended up creating the entire genealogy of Catholicism, with more than 300 figures represented on more than 5,300 square feet. And then he returned in 1536 to paint the chapel's magnum opus, "The Last Judgment," a hypnotizing, overwhelmingly impressive array of figures either ascending to heaven or being dragged to hell during the Parousia, also known as the Second Coming of Christ.

Here is where we not only see Michelangelo's technical skill and mastery of composition, but find that the artist's impishness didn't fade with age. Papal Master of Ceremonies Biagio de Cesena complained of the nudity, and is said to have shouted that it belonged in a tavern. Michelangelo's response? He immortalized Cesena in hell, encircling him with one snake and having another bite his penis.

Michelangelo is also believed to have placed a self-portrait in "The Last Judgment," but in a rather disturbing way. Near Christ is Saint Bartholomew, who is holding his skin (he was flayed to death). The face depicted in the loose flesh is strikingly similar to Michelangelo's, but its placement ties to the artist's depression over the project. As he wrote to da Pistoia: "My haunches are grinding into my guts, my poor ass strains to work as a counterweight, every gesture I make is blind and aimless. My skin hangs loose below me, my spine's all knotted from folding over itself. I'm bent taut as a Syrian bow."

SnowGlobe PR
It's fun to spot these details in this unlikely exhibit, even if they serve to showcase Michelangelo's misery more than the majesty of his efforts. But the reason the real Sistine Chapel ceiling and "The Last Judgment" are considered among mankind's greatest artistic achievements is because of their overwhelming combined effect, which is created by seeing so many captivating individual stories that had to be painted upside down — a stunning feat by a sculptor assigned to paint a ceiling.

No, this is nothing you'd see in Rome, but at least you don't have to pay for a flight to Italy — which the couple on opening day definitely appreciated.

"We're from Alliance, Nebraska, about four hours away," said the woman. "We came down to Denver specifically for this exhibit. We're pastors, so the odds of us being able to afford to get to Italy are pretty slim. So getting close up to really view it, not something the size of a picture in a book, is nice."

Michelangelo's Sistine Chapel: The Exhibition, through January 15 at 2500 East First Avenue. Tickets are $22.50; get them here.
KEEP WESTWORD FREE... Since we started Westword, it has been defined as the free, independent voice of Denver, and we'd like to keep it that way. With local media under siege, it's more important than ever for us to rally support behind funding our local journalism. You can help by participating in our "I Support" program, allowing us to keep offering readers access to our incisive coverage of local news, food and culture with no paywalls.
Make a one-time donation today for as little as $1.
Emily Ferguson is Westword's Culture Editor, covering Denver's flourishing arts and music scene. Before landing this position, she worked as an editor at local and national political publications and held some odd jobs suited to her odd personality, including selling grilled cheese sandwiches at music festivals and performing with fire. Emily also writes on the arts for the Wall Street Journal and is an oil painter in her free time.
Contact: Emily Ferguson