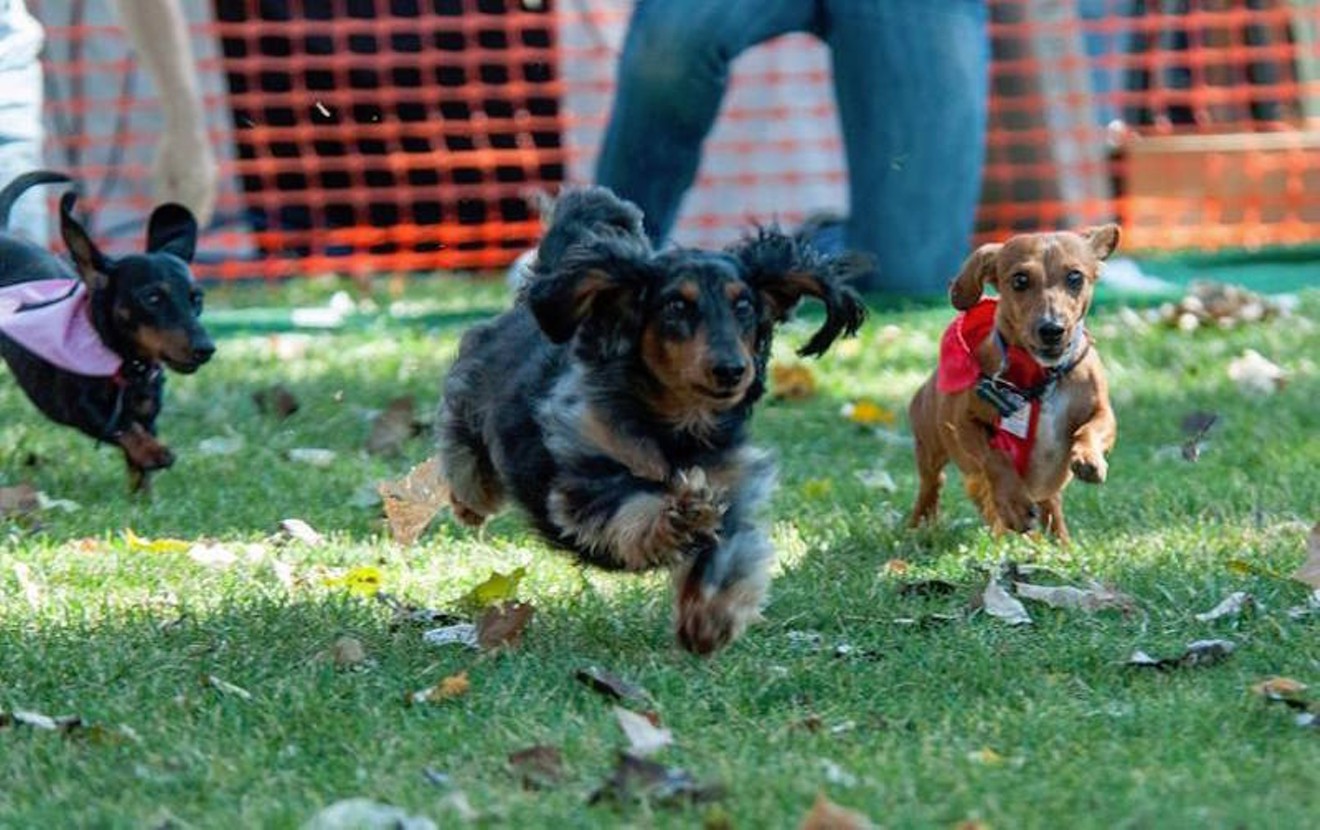 Celebrate the lovably comical dachshund at Dachotber Fest on Saturday, September 30, at Littleton's Progress Park. Dachtober Fest
We've said it before, and we'll say it again: All you need to have a good time in Denver this weekend is a crisp Hamilton and an open mind. With concerts, comedy shows, cultural fairs and arty parties abounding around town all weekend long, locals will have no one but themselves to blame if they're bored. Furthermore, while some of the top-ticket events happening over the next few days may fall outside the price range of many Denverites' pocketbooks, most of us can attend any of the ten events listed below for less than ten American dollars (fine print notwithstanding). So gather round, readers, pinball wizards and even dachshund lovers, for the following list holds many delights in store.

Black Violin
Black Violin
Thursday, September 28, 7:30 p.m.
Gates Concert Hall at the Newman Center for the Performing Arts
Starting at $7
Since joining forces over ten years ago, classically trained violinists Wilner “Wil B” Baptiste and Kevin “Kev Marcus” Sylvester of Black Violin have averaged about 200 shows a year, touring through 49 states and 36 different countries. Known for a genre-defying style, which incorporates elements of R&B, bluegrass, hip-hop, rock and classical music, the two men in Black Violin have performed for troops stationed in Iraq, and they were guests of honor at President Obama's inaugural ball. Baptiste and Sylvester are bringing their virtuosic skills to the Mile High for a special performance in Gates Concert Hall, located in the University of Denver's Newman Center for the Performing Arts. Showtime is at 7:30 p.m. While admission prices start at just $7 for students, they jump up to $25 for adults; get yours at the Newman Center's box office page.

Tattered Cover
An Evening With Charlaine Harris
Friday, September 29, 7 to 9 p.m.
Tattered Cover Colfax
Included with purchase of Sleep Like a Baby
Fans of supernatural mysteries with plucky protagonists are in luck on the eve of the year's spookiest month, as writer Charlaine Harris is popping into the Colfax outpost of the Tattered Cover bookstore to meet her fans, read from her latest book and sign a few copies. Author of the Sookie Stackhouse novels — which inspired the television series True Blood — Harris is back with a new series spotlighting heroine Aurora Teagarden, who now spearheads her own series of New York Times bestsellers. The latest installment, Sleep Like a Baby, may be her most page-turning potboiler yet, but as always, the proceedings are leavened by Harris's playful wit. While admission is free, guests must buy a copy of Sleep Like a Baby from Eventbrite to participate in the signing, which will be conducted on a first-come, first-served basis.


Dachtober Fest
Saturday, September 30, 11 a.m. to 4 p.m.
Progress Park
$6
Among the most lovably weird-looking breeds in all the canine kingdom, dachshunds provide endless comedy for their owners. For years now, owners and enthusiasts have been celebrating the German breed — frequently called "Weiner dogs" for their sausage-like shape — with Dachtober Fest. With a Royal Wedding Court, a costume contest, a foot race, a sausage-bobbing pool, your four-legged friends will have plenty of activities to stick their noses into. Their human companions can also enjoy German music, games, beer and brats along with the parade of pooches. Admission is $6 per person and per dog (other breeds are welcome if they're under thirty pounds), so whether you're looking to socialize your dog or merely take in the spectacle, attending Dachtober Fest won't break the bank. Find more details on the Dachtober Fest website.