Art Attack: Thirteen of the Best Things for Gallery Lovers to Do in Denver This Week

Linda Lopez, "Blue/Green Triple Dust Furry with Red Cutouts," 2019, porcelain. Linda Lopez, David B. Smith Gallery
There’s no rest for art lovers in this town. What more can we say? Enrich your life once again and chart your course beginning with this lucky-thirteen list of destinations.

A view or two of the Devil's Tower from Trine Bumiller's Close Encounters installation.
Trine Bumiller
Trine Bumiller, Close Encounters
Bryan Dahlberg, Developing Reality
Jon Mason, Juicy Summer Prints
Art Gym Denver, 1460 Leyden Street
August 15 through September 6
Opening Reception: Thursday, August 15, 5 to 8 p.m.
There’s no telling if aliens led painter Trine Bumiller to Wyoming’s Devil’s Tower National Monument, the carved magma monolith that figures in the climax of Steven Spielberg’s Close Encounters of the Third Kind. But if they did, she didn’t go with them. Instead, Bumiller brought back the dozens of views of the weird peak that her new show at Art Gym comprises. Share the mystery at the opening, and take in Art Gym member shows by Bryan Dahlberg and Jon Mason while you’re there.

The Richert Effect
Mary Harris Auditorium, Rocky Mountain College of Art + Design, 1600 Pierce Street, Lakewood
Reception and Panel Discussion: Thursday, August 15, 6 to 8:30 p.m.
Free, ticket required, RSVP at eventbrite.com
Part of Clark Richert’s enormous legacy as a leading pattern painter rests with former students he mentored while teaching at the Rocky Mountain College of Art + Design. It’s a truth not lost on the curators of MCA Denver, where The Nth Dimension, a companion show to Richert’s current retrospective featuring work inspired by his tutelage, runs alongside the main attraction. Some of those rising artists — Joseph Coniff, Zach Reini, Karen McClanahan, Jason Hoelscher, Matthew Larson and Kate Nickel — will talk about that legacy with moderator Zoe Larkins in a panel discussion at RMCAD, the launching ground where their careers began. 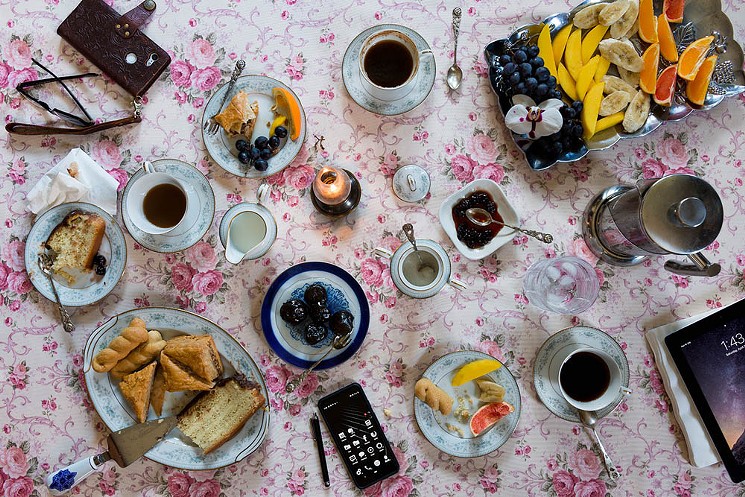 Christos Palios, "Resilience."
Christos Palios
JP Terlizzi, Christos J. Palios, and Meg Griffiths, Coming Together
Colorado Photographic Arts Center, 1070 Bannock Street
August 16 through September 28
Opening Reception: Friday, August 16, 6 to 9 p.m.
CPAC celebrates our everyday connections over meals with work by Meg Griffiths, Christos J. Palios and JP Terlizzi, a trio of photographers interested in how the daily rituals surrounding food bring people together in special ways. Griffiths and Terlizzi will be in the house to meet and greet during the reception.

You never know what Charles Livingston will bring to the halls and walls of Pirate: Contemporary Art.
Charles Livingston
Charles Livingston, Intersection
Abby Gregg, Amoebic Currents
Pirate: Contemporary Art, 7130 West 16th Avenue, Lakewood
August 16 through September 1
Opening reception, Friday, August 16, 6 to 10 p.m.
Charles Livingston focuses his camera and ear on the supernatural effect of experiences in the Philadelphia Museum of Art, where he worked for five years, for Intersection, while ceramic artist and painter Abby Gregg, who often blends those separate practices in three-dimensional plates and vessels, shows off her latest work. Artist Dani Kautz guests with a show of figurative drawings with an empowering backstory.

Brigitte Moekli, "Soundful Silence," 2018.
Brigitte Moekli
Brigitte Moeckli and Andreas Schmid, Viewpoints
Bitfactory Gallery, 851 Santa Fe Drive
August 16 through September 12
Opening reception, Friday, August 16, 6 to 9 p.m.
Bitfactory hosts a multimedia installation from Swiss artist Brigitte Moeckli and Denver drummer Andreas Schmid, who collaborated by mail over a year, sending each other random photographs that inspired a series of drum compositions by Schmid. In the end, the sound was mixed to accompany photo projections in dreamlike sequences. The show lands at Bitfactory after stops in Zurich and the south of France; the photographs will be for sale in the form of dye sublimation aluminum prints.