Richard Alden Peterson, "David Byrne" Richard Alden Peterson, Curtis Arts and Humanities Center
We’ve already given you some MoP 2017 viewing pointers in our must-see list of photography shows popping up all over the metro area, but a quick check-in at the MoP website reveals a much wider scope of what seems like an endless stream of exhibitions. Never fear: We’ve broken it down further to include another round of smaller exhibits, projects and participating spaces. Here they are, in approximate chronological order.

Nicole Campanello, "A Sudden Blow."
Courtesy of MoP 2017/The Big Picture
The Big Picture/Little Big Picture Photo Hunt
Everywhere, indefinitely
Photo Hunt deadline: May 11
A pet project and perhaps the closest to Month of Photography director Mark Sink’s heart, The Big Picture is MoP’s outlaw project, which breaks all the rules with luscious poster-sized photographs, submitted by an international slate of artists and wheat-pasted semi-randomly on urban walls around town. There are no opening or closing receptions for the highbrow subversive act that is The Big Picture, and the artwork remains behind, weathering over time, offering forever glimpses into the beauty of the photographic arts, outside of gallery walls. This year, MoP partner Reed Art & Imaging is hosting the Little Big Picture Photo Hunt, a treasure hunt to several Big Picture locations, as a way of getting people out and about to MoP shows spread throughout the metro area. At each of the sixteen exhibition stops (see yellow arrows), participants must find and collect a puzzle piece from the image “A Sudden Blow,” by Nicole Campanello (see above), then submit a composite photo of the sixteen-piece grid to [email protected] no later than May 11 to participate in a drawing and giveaway (learn more at the MoP website). Daniel Orr, Dateline Gallery
Dateline
Jóga Boyd and Daniel Alexander Orr
Through March 31
What Are the Wild Waves Saying: Zak Rose and Kyle Seis
April 7-29
Opening reception, 6 to 11 p.m. Saturday, April 8
Dateline Gallery is doubling up for Month of Photography 2017 with back-to-back shows. First up are Cincinnati Instagrammer Jóga Boyd and local artist Daniel Alexander Orr. Boyd, a black transgender male and drug-and-alcohol counselor, documents the people and situations of his everyday world, while Orr examines life through a more distant lens. Beginning April 7, Dateline takes a new direction, with Zak Rose and Kyle Seis playing with the photographic medium through such processes as digital manipulation and object abstractions.

Ken Hamel, "Zach Reini."
Courtesy of denverarts.org
DenverArts.org: Decade, Photographs by Ken Hamel
Vertigo Art Space, 960 Santa Fe Drive
Through April
First Friday reception: 6 to 9 p.m. Friday, April 7
Ken Hamel’s devotion to Denver artists is well known among members of that tight-knit community, but it’s non-artists who really need to get to know better this tireless cheerleader who curates DenverArts.org, an online resource for gallery openings and other arts happenings. It would be enough that Hamel manages that database, which changes weekly, but he also takes a camera to the shows and to artist studios to document the local art scene like no other. Decade celebrates the DenverArts.org site’s tenth anniversary with a look back at hundreds of images chosen by Hamel and Westword photographer Anthony Camera from a portfolio of thousands. If you want a memorable photo tour through the who’s-who of Denver’s art scene over the past decade, checkmark this show now.

Joseph Coniff, "Four Flowers."
Courtesy of Rule Galley
Joseph Coniff, Basic Pictures
Rule Gallery
Through April 15
Joseph Coniff revisits the history of camera-free exposures (Man Ray’s photograms) using the simplest of modern technologies (a scanner and digital manipulation) for Basic Pictures, a series of images that start out as Sharpie drawings and end up as paintings. The show is a little lesson in getting from A to B in the 21st century.

Framed shots by Miu Vermillion.
Courtesy of Sally Centigrade
Vignettes: Miu Vermillion
momentary lapse: Andrew Novick
Sally Centrigrade, 1423 Larimer Street #80
March 9 through April 9
Opening reception: 5 to 9:30 p.m. Thursday, March 9
Lowbrow art temple Sally Centigrade joins the MoP fray this year with a duo of shows from jet-setting photographer Miu Vermillion and Denver everything enthusiast Andrew Novick. Miu Vermillion’s contribution, the resultant melding of fashion photography and staged mixed-media fantasies, places photo snippets in elaborate frames, each tied to a secret backstory, while Novick, known around town for everything from pop-up ramen stands to his obsessive collecting, plays with film for ten pieces created by hand-winding 35mm slide film with an open shutter. Try something different — and shop the gallery’s usual stock of artist prints while you’re there. Novick will be present at the March 9 reception.

Penelope Umbrico, "Adams with Grunge IntensePeach Pop SplitScreen and Lightleak," digital c-print, 2014.
David B. Smith Gallery
Penelope Umbrico, Moving Mountains and Range: Of Masters of Photography
David B. Smith Gallery
March 10 through April 15
Opening reception: 6 to 8 p.m. Friday, March 10
Brooklyn photographer Penelope Umbrico begins with found imagery by masters of landscape from online and print archives for the works being exhibited at David B. Smith: Once she’s got them, Umbrico re-photographs and manipulates them using myriad filters available on iPhone apps, changing forever the visual stability of mountains in their natural form. 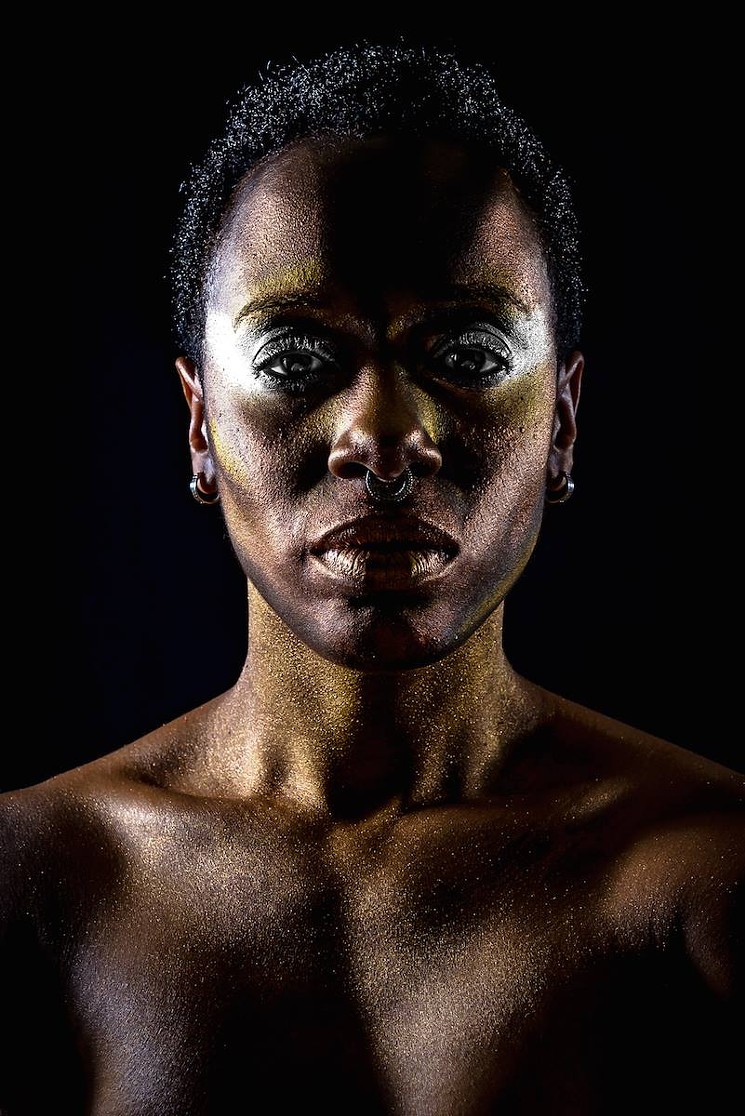 Photo by Tya Alisa Anthony
Tya Anthony: Skins
Leon Gallery
March 11 through April 8
Opening reception, 7 to 11 p.m. Saturday, March 11
Tya Anthony’s powerful portraiture follows themes of race, identity and culture in themed installations like They Still Live, which combined genetic testing findings and artifacts from the Paul Hamilton African Art Collection to create unique images of Denver-area people of color, and The Art of Being Natural, another portrait project in collaboration with the black lifestyle promoter Colorado Urban Naturals. Skins carries on that tradition with a series dedicated to portraying the whole person, free of societal trappings and moving through time.

Michael Garlington, "Willem in Paper Armor."
Michael Garlington
Michael Garlington, Horror & Wonder
Processus
March 11 through June 10
Opening Reception: 7 to 11 p.m. March 11
Multi-disciplinary artist Michael Garlington applies a DIY mentality and a freewheeling Northern Californian eye to create everything from monumental Burning Man totems to counterculture portraits he calls “photo-sculptures.” Few artists have traveled the U.S. and Europe in a photo-covered van or built temporary temples to photographic imagery, but Garlington has, and he'll now create an installation for The Art of Burning Man, opening in June at the Hermitage Museum in Norfolk, Virginia. See his crossover works at Processus, which will also celebrate MoP with workshops and two artist slideshows on March 15 and April 19. Visit Processus online for details. 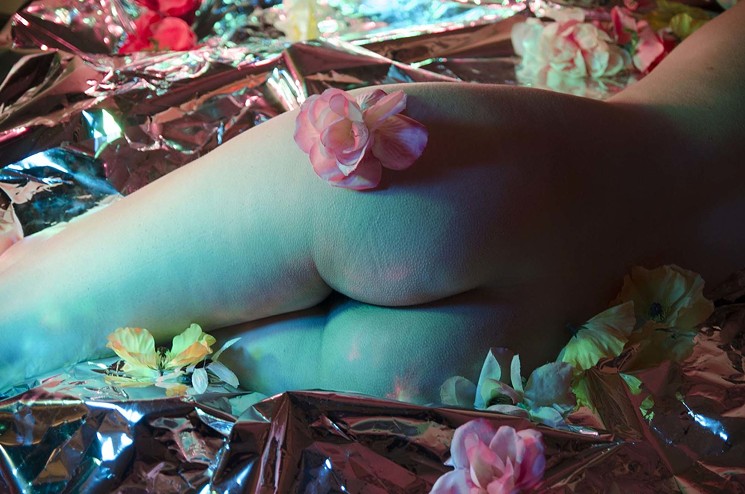 Jamie Knowlton, Yes Ma'am Projects
Jamie Knowlton, Will You Be Coal, or Will You Be Waves
Yes Ma’am Projects
March 18 through April 15, by appointment only
Opening reception, 6:30 to 9:30 p.m. Saturday, March 18
Yes Ma’am Projects debuts a new home gallery space with a MoP show from former Denverite Jamie Knowlton, who now lives in Portland. A zine-maker, videographer and experimental-film artist in addition to being a photographer, Knowlton will show large-scale nudes, some covered with patches of Mylar or plant parts, commenting on humanness and our place in the natural — and unnatural — world. Yes Ma’am is open only by appointment and for the opening reception; either way, e-mail for the gallery address and to arrange a visit or RSVP. 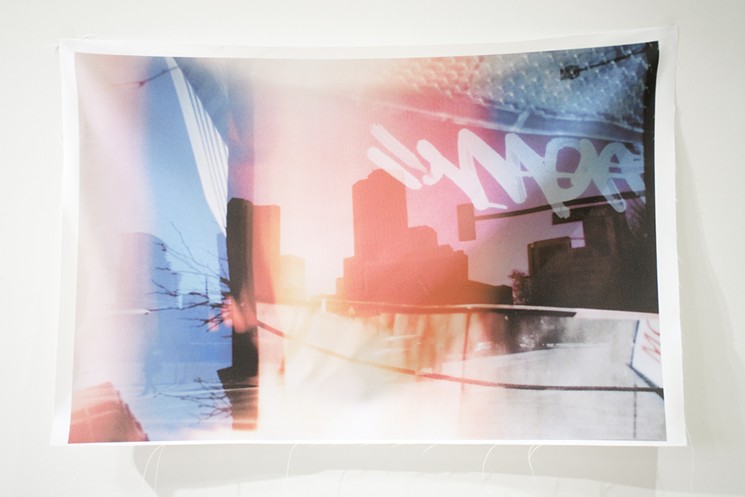 A photographic banner at PlatteForum.
George P. Perez
George P. Perez and ArtLab
Pictorial Vexillography, Concerns in Different Regularities
Platteforum
March 18 through April 1
Opening reception, noon to 2 p.m. Saturday, March 18
George Perez works in the outer limits of the realm of photography, but with an installationist’s broad eye, all of which he brought to PlatteForum as a resident artist/mentor with ArtLab, a student program for teens. The result is Pictorial Vexillography, a series of flags imprinted with student photography making statements about both the public and the personal. As always, PlatteForum gives power to young voices, while Perez, as the mentor, follows through with the physical evidence. Bravo!

Charlotte Thurman, "At Every Time, " installation view.
Charlotte Thurman, Leisure Gallery
Charlotte Thurman, At Every Time
Leisure Gallery, 555 Santa Fe Drive
Exhibition and performance, March 31
Artist-run Leisure opens its doors for a one-night pop-up exhibit and performance by New Mexico multimedia artist Charlotte Thurman, a giant in the new-media installation biz. Photography is just one tool in the kit Thurman uses to create immersive environments (among other things, she is a staff member at the Meow Wolf interactive art complex in Santa Fe, as well as co-producer of the feminist zine Life Raft), but her command of visual media places her firmly within the forward-looking 2017 MoP theme of “Between the Medium.”

Richard Alden Peterson, "The Ramones."
Richard Alden Peterson
Richard Alden Peterson
Curtis Arts and Humanities Center
April 3 through April 28, 2017
Opening reception, 6 to 8 p.m. April 8
Richard Alden Peterson has a pedigree harking back to San Francisco’s mid-’70s punk scene, where he shot pictures for the seminal zine Search and Destroy, collaborated with Bruce Conner and caught incendiary pop stars like Deborah Harry, Joey Ramone, David Byrne and Iggy Pop in the act of being themselves. In the present, he’s still snapping portraits of artists for MCA Denver and serving as a mover and shaker in the artist community. Peterson will share decades of personal adventures in photography in this solo at Curtis Arts. Chuck Forsman, "Drought."
Chuck Forsman
Chuck Forsman, Hard Seasons
Mr. Pool Gallery, 2347 South Street in Boulder
April 15 through May
Opening reception, 5 to 9 p.m. Saturday, April 15
Veteran Colorado artist Chuck Forsman is an aficionado of personal Western landscapes, both as a painter and as a photographer, but he’s often focused as well on the misuse of that landscape from human encroachment. Hard Seasons elicits the slow evidence of climate change in terms of three themes: fire, flood and drought.

For a complete rundown of Month of Photography 2017 exhibitions and events, visit MoP online.