The Peacocks Have Flown the Coop at the Denver Zoo 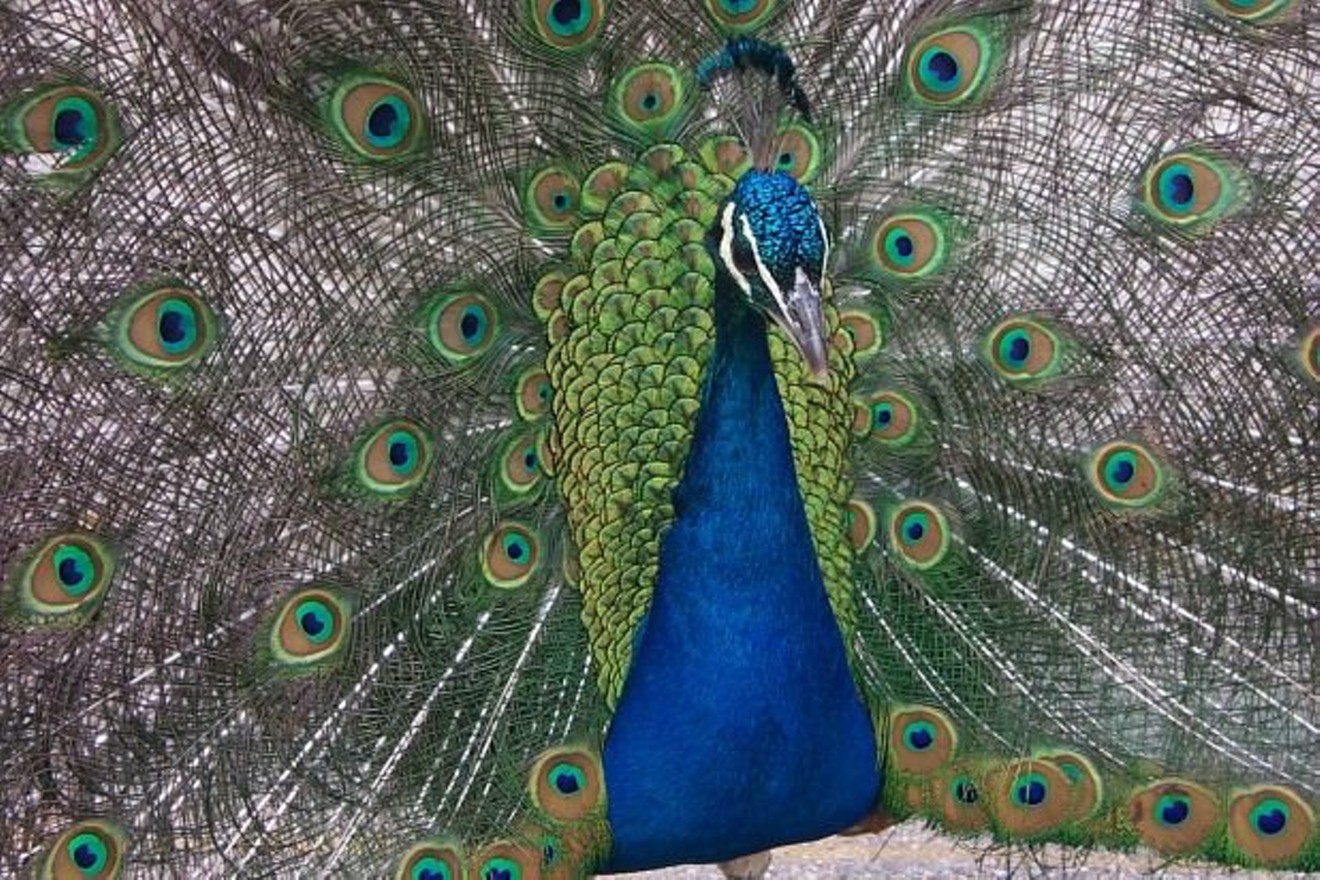 Denver Zoo
When the Denver Zoo reopened on June 10 after three months of COVID-19 lockdown, it was a different place. While the birds and the beasts may not have noticed the changes, the human guests certainly did.

For starters, the only way to get in was with a timed reservation — and those sold out quickly. While there were no paper maps, no drinking fountains and no carousel rides, there was a new requirement that visitors walk in only one direction, following arrows on the ground and heeding the directives of zoo employees sitting on top of strategically placed lifeguard-like towers. In addition, a slew of new baby animals had arrived, including Joona, an adorable Indian one-horned rhinoceros.

With all of those distractions, most people probably didn’t notice another significant change: The peacocks were gone. 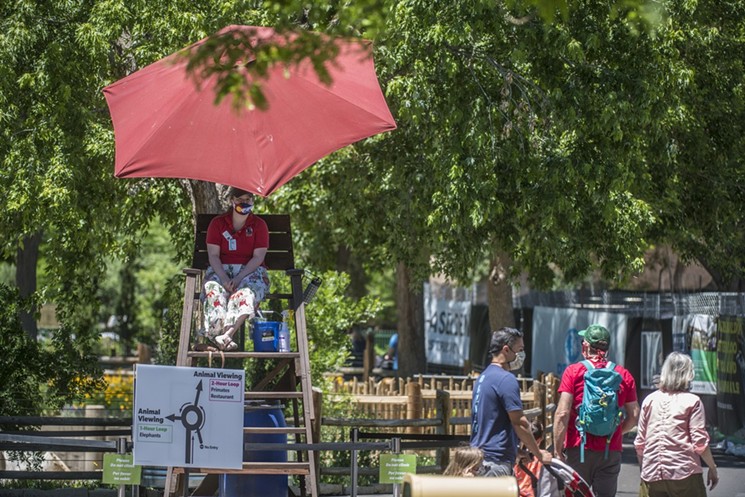 With so many changes at the zoo, including lifeguard stands, guests may not have noticed the missing peacocks.
Evan Semón Photography
Brilliantly colored and free-roaming, the zoo’s ostentation of blue Indian peacocks — or, more accurately, peafowl, since the cocks are just the boys — had been a reliable thrill for visitors, mostly young ones, for decades. These natives of the Indian subcontinent had been a familiar sight at the zoo since the 1970s, and an on-and-off presence in City Park since at least 1911. Their loud, mournful calls could often be heard by residents of Park Hill, just across Colorado Boulevard. But it was the iridescent plumage of the males in breeding season that took people’s breath away.

That beauty was also their bane.

In recent years, kids would sometimes corner the birds to take pictures or, worse, “sneak up behind them and pull out their tail feathers," says Brian Aucone, the zoo’s senior vice president for animal services. Instantly recognizable because of their size and dramatic eye spot, those feathers had been routinely sold in the zoo’s gift shop once the birds dropped them in late summer, but some people weren’t willing to wait.

Then there were the food fights. “They are very docile animals and their preference is to run, but they can get accustomed to humans because of food,” Aucone says. The result was a series of “negative interactions."

The key event took place in June 2010, when a peacock got into a scrap with a three-year-old boy who was eating lunch with his preschool class. The bird may have been targeting some cheese the boy was eating, witnesses told his father. The boy needed ten stitches for cuts on his nose and forehead, according to news reports. 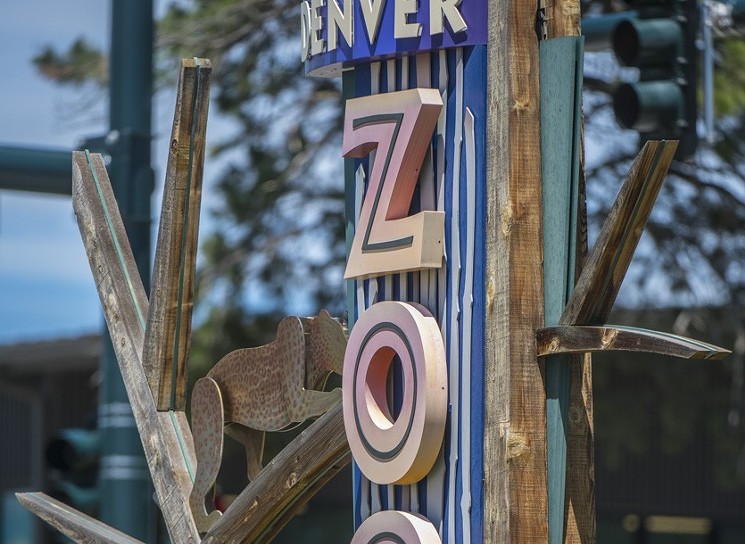 The Denver Zoo reopened on June 10.
Evan Semón
The story made headlines, and also marked the beginning of the end. While the zoo continued to take care of the peafowl, feeding them and providing trees for them to roost in, staffers also started documenting the birds — something that had never been done before, because they weren’t part of an exhibit — and discussing whether it was time for them to move on.

Because so many people called in their support of the peacocks after the 2010 incident, the Denver Zoo initially decided to keep the birds. To limit the negative interactions with guests, it began paying more attention to where these birds of a feather flocked together — and started feeding them in specific locations, near the giraffes and back by the apes in order to limit their contact with humans. The zoo also kept the hens away from the cocks in the spring to keep down the population, which had ranged from twenty to more than forty birds over the years.

Other zoos were giving up on free-roaming peafowl. In the early 2010s, a number of them, including facilities in Portland, Cincinnati and Washington, D.C.,  began offloading the birds to private facilities, according to a 2015 story in the Washington Post. The explanation at the Louisville Zoo in Kentucky was that owls were eating the peafowl. At others, such as the St. Louis Zoo in Missouri, it was the threat of avian flu. But the most common reason for jettisoning the birds was human interaction, Aucone believes.

Still, other zoos, like the Cheyenne Mountain Zoo in Colorado Springs, report no problems. “We have about a dozen peafowl,” says Cheyenne Mountain spokeswoman Rachel Wright. “Our guests and staff love our free-roaming feathered friends. We haven't had any reason to remove them, so we have no reason to consider it.

“Our peafowl can fly and have plenty of spaces and opportunities to get away from guests if they want to,” she adds. “But we see that they usually prefer to wander around spaces they share with guests, which is great for making those special connections between humans and animals.” Sam the peacock no longer has a home in the giraffe exhibit.
Jonathan Shikes
But those connections were no longer special at the Denver Zoo. “Most of our guests are great with them,” Aucone admits. “And we know they are popular. Ultimately, though, we decided it was in the best interest of both our guests and the peafowl” to get rid of the birds.

In 2016, the zoo began finding homes at private ranches or facilities for the peafowl. That included Sam, a peacock that had been “adopted” and named by the keepers in the giraffe exhibit, where he liked to hang out, preening near a giant cooling fan.

While one peacock remains in the zoo's aviary — he has a limp and is not free-roaming, according to Aucone — the rest finally flew the coop while the zoo was closed this spring.

“Certainly we know that the public likes to see them; they're beautiful birds. And we knew there would be some people who were disappointed,” Aucone says. “We've had a few inquiries — mostly zoo members. But everyone is pretty understanding. We have to think of the animals’ interest first and foremost.”

Even if the zoo is less colorful for it.

Denver Zoo
KEEP WESTWORD FREE... Since we started Westword, it has been defined as the free, independent voice of Denver, and we'd like to keep it that way. With local media under siege, it's more important than ever for us to rally support behind funding our local journalism. You can help by participating in our "I Support" program, allowing us to keep offering readers access to our incisive coverage of local news, food and culture with no paywalls.
Make a one-time donation today for as little as $1.