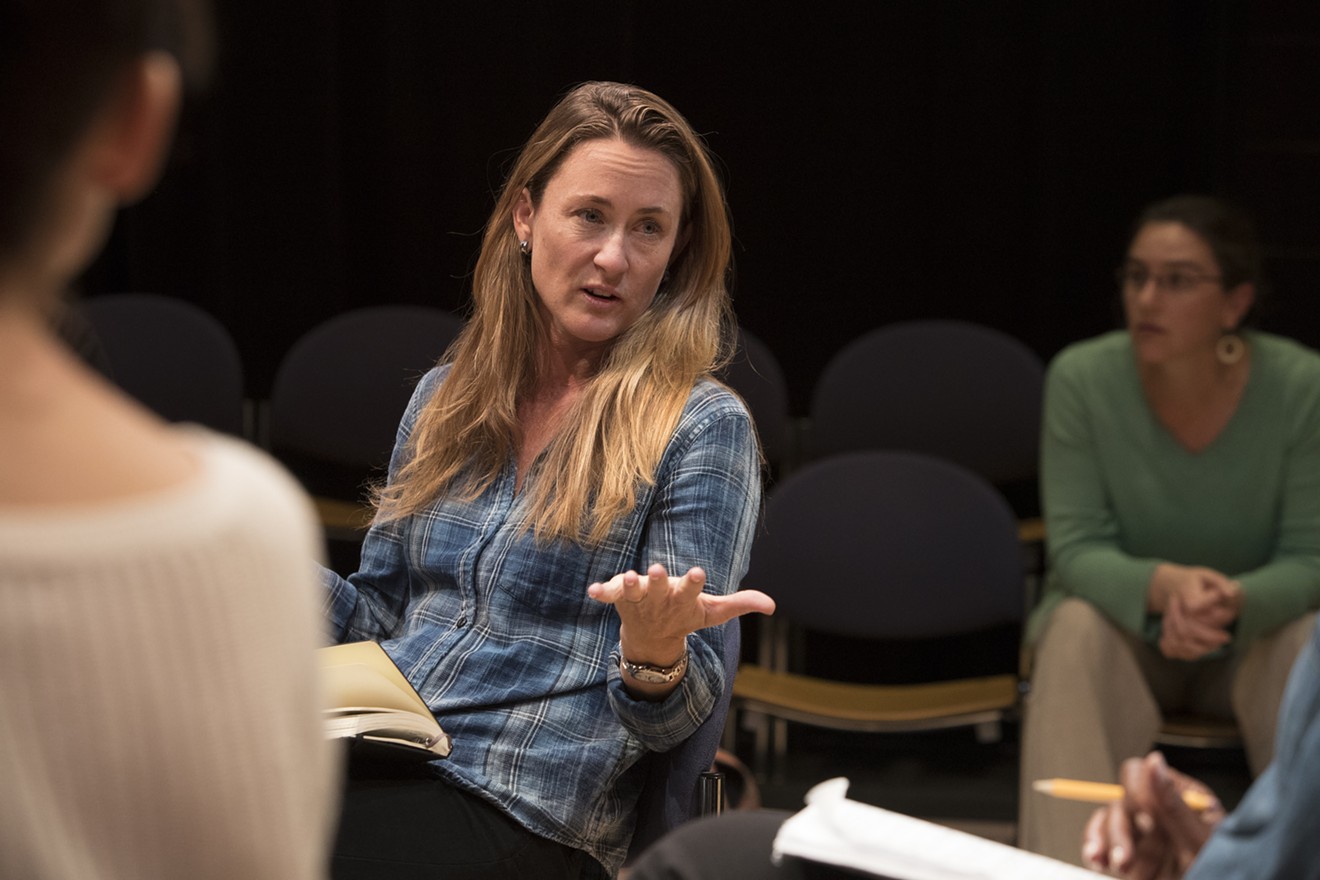 Pesha Rudnick behind the scenes for Local Theater Company's production of The Rape of the Sabine Women by Grace B. Mattias, by Michael Yates Crowley. Photo courtesy of George Lange
#35: Pesha Rudnick

Pesha Rudnick believes in quality theater without constraints and prefers working with the shock of the new rather than the tried-and-true popular canon. She created the nonprofit, women-run Local Theater Company in Boulder specifically to look forward, not backward, in support of untried and untested scripts that show promise. Rudnick not only has more than thirty new plays across the nation under her director’s belt, but she also considers the company’s annual Local Lab new play festival — a quick series of staged readings that reveal new plays in their earliest stages — the grassroots feather in her cap. What’s it like to continually follow and produce plays that are still on the verge of becoming? Follow Rudnick’s trek across the frontier as she answers the 100CC questionnaire. Pesha Rudnick of Boulder's Local Theater Company.
Photo courtesy of George Lange
Westword: What (or who) is your creative muse?

Pesha Rudnick: In Greek and Roman mythology, the muses are women, Zeus’s nine daughters, so how about if I start there? Today my nine are: my mom, my children, Anne Bogart, Eve Ensler and the women of Local Theater Company (Mare Trevathan, Rachel Fowler, Megan Mathews and Alison Palmer). Any artist who pushes boundaries within their craft and expresses themselves boldly stirs me. I saw jazz singer Cyrille Aimee perform last week and spent three days falling down the rabbit hole of her work! She’s brilliant.

My next party will be a Fourth of July party, and I’d like to invite Angela Merkel, Michelle Obama and Chipeta, the wife of Chief Ouray, to my house for a BBQ. We’ll have a frank conversation about broken promises to Native Americans, the stain of slavery and the hypocrisy of nationalism today. Hopefully someone from Fox News will show up to moderate, or deejay the party, and we’ll directly address the threats to democracy in our country. I’ll insist that halfway through the discussion we dance. It’ll freak people out, but we’ll get nowhere without music and joy binding us together. 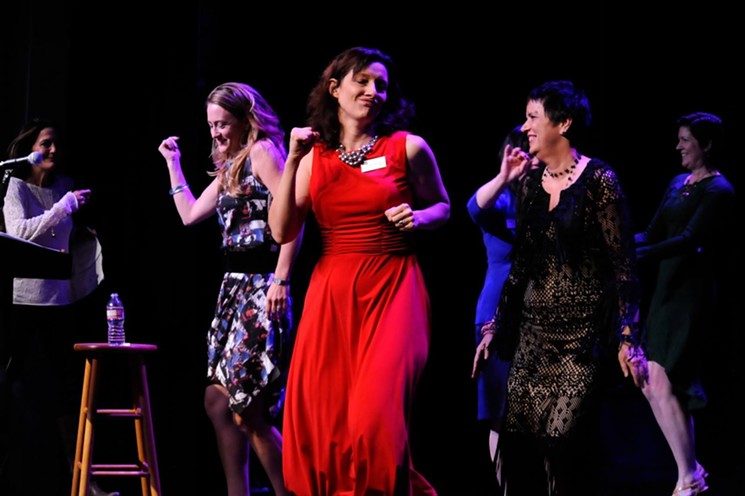 Pesha Rudnick, Mare Trevathan and Eve Ensler celebrate Body of Work, an eclectic evening of words, dance and music revering the body.
Photo courtesy of Michael Ensminger
What’s the best thing about the local creative community in your field — and the worst?

The theater community in Colorado is tenacious, nimble and inclusive. We cross-pollinate and play very well together. I hadn’t thought of it until now, but my closest friends from the past ten years are the actors, designers and writers that I work with regularly. It’s tricky to make new friends as an adult; our community makes it easy to build meaningful relationships. I feel incredibly grateful.

Colorado audiences are passionate and opinionated, in the best way. At Local Theater Company, we’ve learned to listen and respond to their interests when developing new work. Our mission is to discover, develop and produce new American plays, and our audience is essential in this process.

The worst thing about our community is the occasional criticism we endure when we bring outside artists to Colorado to develop new plays. We’re named “Local” because American theater is itinerant by nature. If you make art in this country there’s a strong likelihood you don’t live where you grew up and you travel a lot; I certainly do. When you elect to enter a rehearsal room or go in front of an audience for a brief period of time, we’re all locals.

There are too few resources for working artists and companies that make our living in the arts. A healthy democracy provides access to art and self-expression; it’s troubling to me that our country is so far behind Europe, for example, in supporting artistic expression. I am concerned for the future of the NEA, which provides support to so many arts-education programs. I understand that government-sanctioned art and adjudication can be problematic, but there is a way to support art and stay hands-off the product. We should be investing in creativity as much, if not more, than anything else in the world right now. 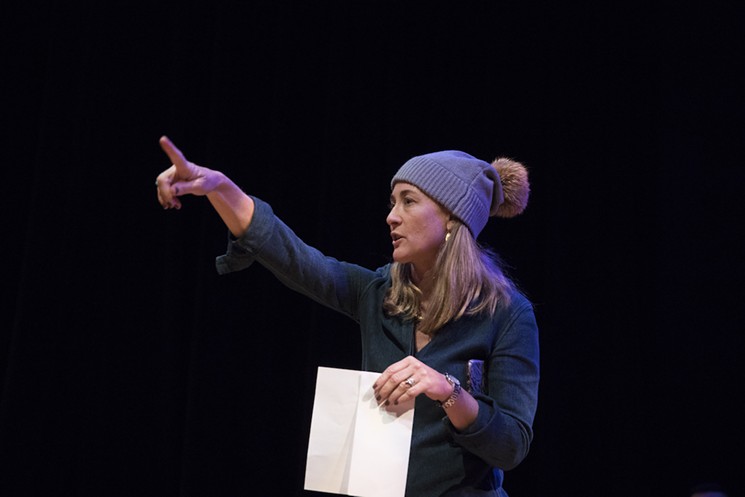 Rudnick calls the shots while preparing for the world premiere of The Firestorm, by Meridith Friedman.
Photo courtesy of George Lange
What drew you into the theater world in the first place?

My mother sparked my love for live theater. She literally dragged me to every play in Los Angeles, no matter how appropriate, in the ’80s and ’90s. When I was about ten years old, she spent a fortune for me to see Peter Brook’s The Mahabharata, a nine-hour play in a tent, and I remember sleeping through most of it on wooden benches. However, during my few waking hours, I was transfixed by the music and the staging of the epic tale.  From a very young age, I knew I wanted to be part of the theater world and tell stories from the stage. In a town consumed by film and television, this was a departure from L.A. popular culture.

What’s your best or favorite accomplishment as an artist?

Local Theater Company is my best accomplishment. Our ensemble is inspiring, and while I love Shakespeare and some of the classics, a few years ago I decided that Local would be dedicated to living playwrights and adding to the canon of new American plays. The risk is huge, and we have few laurels to rest on when we produce a new play, but the thrill of trying something new with an ensemble is worth everything. 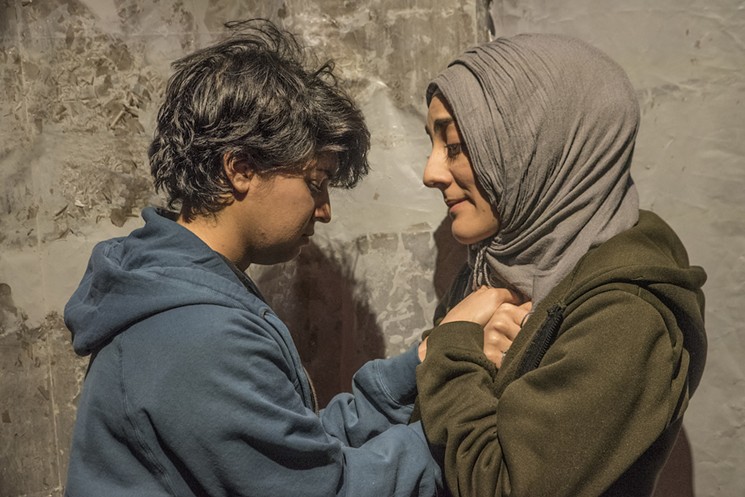 I love Colorado. Snow in May still freaks me out, but I feel I’ve hit a creative jackpot here. There’s a pioneering spirit that radiates throughout the state. We’re not an oversaturated market, and if you’re willing to try something, people will show up!

Comedian Janae Burris is smart, funny and brave. She’s one to watch. 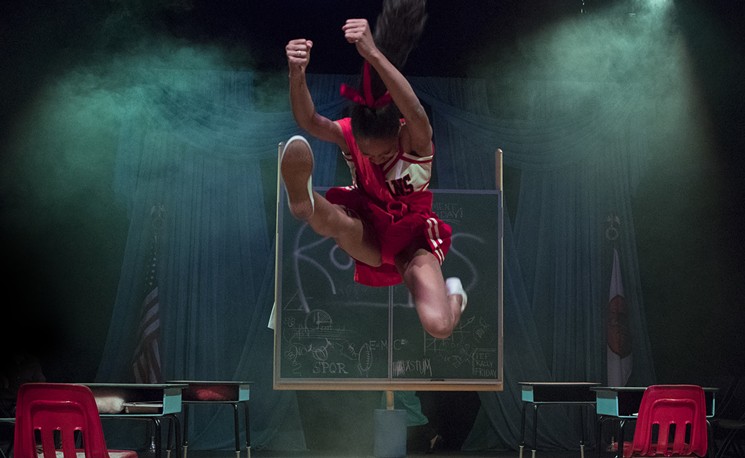 Local Theater Company's The Rape of the Sabine Women by Grace B. Mattias, by Michael Yates Crowely. Directed by Christy Montour-Larson.
Photo courtesy of George Lange
What's on your agenda in the coming year?

Local is commissioning an immersive adaptation of Alice in Wonderland, developing a new musical inspired by Colorado ghost stories and producing a new American play in Boulder. I will also be making dinner (almost) every night for two small humans and one large one, which makes me very happy.

Who do you think will (or should) get noticed in the local theater community in the coming year?

The folks at Motus Theater Company. Their commitment to Colorado voices is inspiring.

Local Theater Company presents the Local Lab 2018 new play-reading festival, beginning on Friday, April 20, at 7 p.m., with a mainstage reading of Emily Zemba’s Clockwork. Ladybits by Rehana Lew Mirza follows on Saturday at 6 p.m., and the fest wraps up with Andrew Rosendorf’s Paper Cut on Sunday at 1 p.m.; all readings are in the Gordon Gamm Theatre at the Dairy Arts Center, 2590 Walnut Street in Boulder. An all-access pass, $89, also gets you entry into a couple of parties and a playwrights’ panel; otherwise, tickets are $20 per show. Get them at the Dairy Arts Center home page; for more information, visit Local Theater Company online.