The women of Queen City Sketch are doing it for themselves. From left to right: Breanna Ahlgren, Alicia Millerson, Kimberly Greenwell, Rebecca Gholson, and Ashley Renee Scott. Queen City Sketch
"I have a memory from growing up and someone telling me, 'If your body keeps going the way it's going, the only roles you will play are Tracy Turnblad and the maid,'" says Denver comic Alicia Millerson.

For a while it seemed that jab was true, but soon after moving to Denver in January 2020, Millerson was taking online improv classes at Visionbox and crossed paths with Rebecca Gholson and Ashley Renee Scott. The three formed the comedy group Queen City Sketch, heralding Denver as the "Queen City of the West." Coincidentally, they came up with the troupe name on International Women's Day.

Aside from an announcement video mocking the coincidence of its name and origin date, Queen City has focused on gender-non-specific comedy. An all-femme troupe was not a conscious goal. Gholson felt local theater brought out her good performances but left something to be desired in the way of recording those performances. Then performing collided with the COVID-19 pandemic and she found herself with an even larger hole in the market for reel footage, but also an opportunity and need to create content.

"I just wanted to put my friends and me to work," Gholson says. "Very, very soon, like two months in, we realized we had all these amazing women. I was like, 'Okay, this can be a female-led group.' And that's kind of my jam anyway." 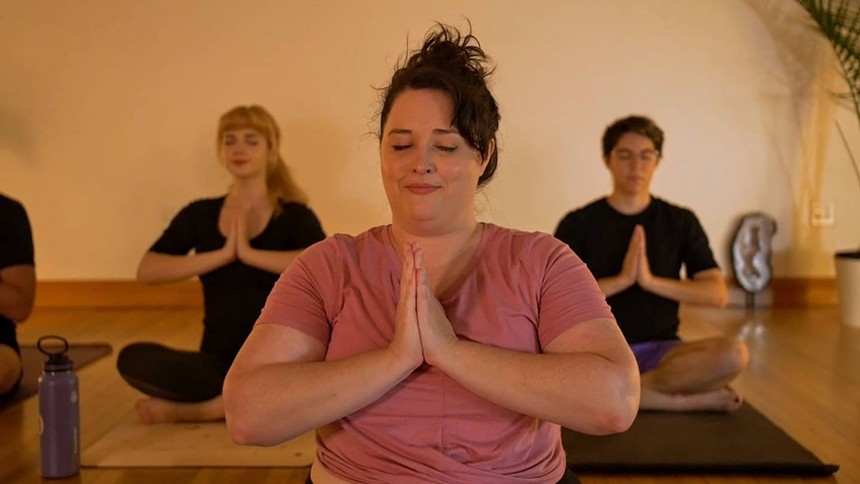 Rebecca Gholson in "4 a.m. Yoga."
Queen City Sketch
Kimberly Greenwell, with a background in corporate video, was brought in to take the reins of the filmmaking side of things. The undertaking has been self-funded, though the group now has a Patreon for fan donations. And as with any true independent-artist endeavor, some cobbling together was required.

For the debut episode, "At Home Learning," two apartments were used as five locations. Each actor was filmed individually, then edited together into a Zoom call. The finished product, already on YouTube, captures a few chaotic minutes in the virtual classroom of elementary teacher Miss Frazzle (played by Millerson). During her students' family tree presentations, students have mental breakdowns, a snarky parent passes off her own work as her child's, and a feud with the alcoholic principal comes to a head.

Upcoming episodes include a ’90s-inspired R&B music video "Hot Dentist," which will be released on April 19, and two incompetent detectives deciphering a murderess's obvious lie in "Investigators," which drops April 5.

Queen City's most recent episode, released this week, follows an overachieving woman's attempt to tackle "4 a.m. Yoga." The Evans School doubled as the studio space for what was originally conceived as a silent short. It wasn't until post-production that the troupe found the episode lacking, leading to the addition of narration. Similarly, for "Investigators," B-roll was shot months after filming to heighten elements of the episode.

"That was a cool learning process. We trusted our intuition of, 'This needs something else,'" says Greenwell.

"#Learning" became a mantra, she says. The trio shared newfound directing and editing duties alongside acting. Greenwell stayed behind the camera, but found it challenging to let go of expectations learned from her years in advertising, she says.

The troupe, while capable of creating videos on their own, has not remained insulated. Five of the seven cast members of "At Home Learning" are non-Queen City actors. Andrew Felser is credited as a contributing writer for season one. Breanna Ahlgren of the band Waiting Room composed the music for "Hot Dentist," effectively transforming Gholson's a cappella rap into a raunchy R&B track.

Collaborations will only grow as the troupe does. Prioritizing individual needs sits top of the list for all, while maintaining a non-toxic film set, where everyone feels valued by respecting personal space, breaks and time off, is the only way to create quality, enjoyable content. It makes sense for a project that began to satisfy a craving for better material to have this approach.

"If the type of work you want to do is not happening where you live, why not just do it yourself?" Greenwell asks. "DIY and no-budget is a lot harder, but it's made me really happy." Kimberly Greenwell (right) frames a shot for "Hot Dentist."
Queen City Sketch
Now that season one is being presented to the public on a bi-weekly basis, the future has opened up. Episodes are being submitted to film festivals, writing has begun for a second season, and logistical lessons learned are ready to be implemented when filming starts. Even for Scott, who is currently living in New Jersey, there's no intention to leave the group. A plane ticket to Denver will happen sooner than a goodbye, because she's found a way to bypass the struggles of being an auditioning actor.

"You're not waiting around for someone to believe in you enough to give you that opportunity," Scott says.

The women of Queen City have played murderers, yoga instructors, teachers, dental hygienists and more — characters where gender roles dictate audience expectations every second. But the femme-centric and nonbinary nature of these productions is their strength.

"It means a lot to have autonomy over our stories and how we choose to tell them," says Millerson.

For more information about Queen City Sketch, visit its website.
KEEP WESTWORD FREE... Since we started Westword, it has been defined as the free, independent voice of Denver, and we'd like to keep it that way. With local media under siege, it's more important than ever for us to rally support behind funding our local journalism. You can help by participating in our "I Support" program, allowing us to keep offering readers access to our incisive coverage of local news, food and culture with no paywalls.
Make a one-time donation today for as little as $1.