7Twenty Boardshop staff with owner Melissa Salsbury in the center. Melissa Salsbury
For the past 25 years, the corner spot at 135 South Broadway has been a safe haven for those who roll with the skateboard community, starting with Thrifty Stick and evolving into 7Twenty Boardshop. And just as Californians invented the skateboard in the ’50s for when the waves weren't cutting it, Coloradans swap out their skateboards for snowboards to ride the mountains when the snow hits. From 10 a.m. to 8 p.m. on Saturday, October 15, 7Twenty is hosting its annual Snow Block Party, showcasing its wares with great deals and snowboard giveaways as well as vendors, music, food trucks and more.

We caught up with 7Twenty owner Melissa Salsbury to learn more about the community that's grown out of this small business, and how important it is to shop among experts in the sport to get the best gear.

Westword: How did you decide to own a skate shop?

Melissa Salsbury: I opened a shop because of the passion side of it. Both skateboarding and snowboarding are sports where the person who is participating in it achieves a flow state, where the whole world disappears. Your body is absorbed in the motion, and it is a place of healing and growth. I lost the ability to skate in 2016 due to pretty severe injuries, and it was important to me to maintain that connection with that community, which had provided me such a safe space. I needed to be involved in some level. The shop was for sale, and I really liked the location and the staff; much of the original staff is still with us. I have been a small-business owner since 2003, working in advertising, legal cannabis owner and operator, and I decided I was tired of the intensity...only in time for COVID to do it’s thing. I became the owner in 2018. 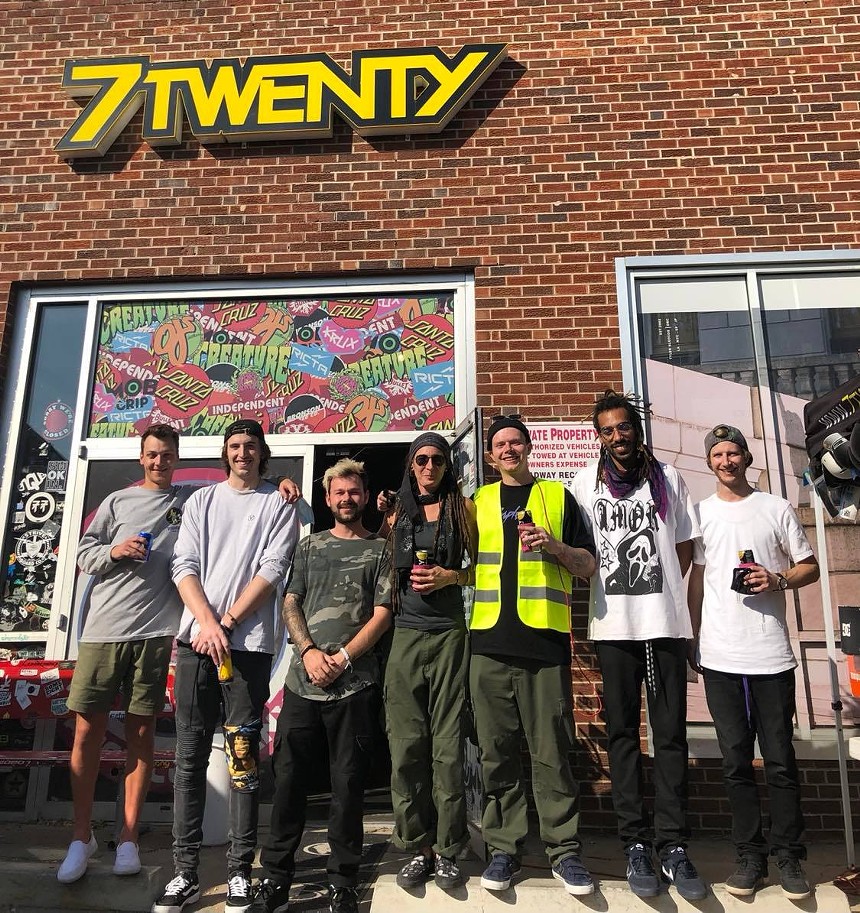 There’s an inclusivity in our shop, a community we have built that is intentional. The product knowledge of my staff is amazing. I came in and one of my staff was giving a discourse on the difference in rotation in skateboard wheels. The managers are so passionate about the sport and the culture around it. It’s its own microcosm, where we seek shelter from the world. I am very invested in producing the next generation of skaters, as well. We sponsor a skate team in the area, which is a springboard for skaters to be recognized by companies. Some skate shops have a sponsored team, where they provide equipment and financial support, trips. And their video footage builds an athletic résumé to share with larger companies in hopes of becoming sponsored athletes within the sport.

I have a team of four individuals who, during our shutdown, had lots of time to skate, so they put together a promotional video of themselves. We invited vendors and hosted an event at Black Box so we can share their talent with vendors, [who can tell their bosses at companies that provide sponsorships]. The sneaker wall at 7Twenty Boardshop.
Erika Righter
Can you talk about the folks who also snowboard in your community?

Snowboarding has transitioned a lot. Ten years ago, there was a huge parallel between skateboarding and snowboarding. Because of the expense in snowboarding, it became elitist, and people had to deal with the resorts. But Colorado offers a lot of backcountry opportunities. [There are] still a lot of skateboarders who snowboard, but they’ll be the ones you'll see at Loveland with a thumb up [for a ride], because it's a tough thing to afford to do.

Describe the core values of the business.

What are some of the challenges of having a small business that most folks don’t know about?

Rising costs. People don’t understand how much the rents have gone up, the supply-chain issues that continue to affect us. We've had people breaking windows and shoplifting as the state of the economy shifts. Many people are talking about challenges with staffing, but our staff — I just can’t sing their praises enough. They could have walked away, and they were the first ones back when we reopened.

How do you want people to feel in your business?

I want people to feel laid-back, no pressure, feel comfortable to ask questions, to walk around, to sit down on a little shoe try-on and watch a video. We want them to know we're more than a shop. We're a community space, and if you have no one to talk to, come hang out! We have neighbors who don’t skate who come in just to hang out.

What is a small business achievement you’re really proud of?

Surviving a pandemic! I liken it to the Chuck E. Cheese Whac-A-Mole game; every time we get back up, we get clobbered with something new. We have pivoted a lot, and we found the silver lining in things. I decided when we shut down that [it was] the best time for me to do a quick makeover, make it look nice again. The skate team did their videos, because they didn’t have much else to do than skate, but they made really good content with it. One of our guys is really into thrifting, and he started his own small business. We taught him some basics, helped him get an EIN, and now he’s rocking it! He has a shop within the shop called The Diggin Pit. We survived. Small business truly is the building blocks of America. Look at our corporate counterparts. The median income average of workers'-to-CEO's salary are off the charts; some will be like 200 times the median salary of their median employee. With small business, you are investing in the individual and also enriching the community, because small businesses all live and work in that area and all spend money right back into our same community.

What is your favorite service you provide?

We still do snowboard tunes the old-school way. We hand-wax and hand-tune all of our boards. It’s a better-quality service; some of the bigger companies will slap it down and ruin the integrity of the board. We use the naked eye and adjust as needed, which does as [little] damage as possible. I grew up using sawhorses and an old clothes iron, and tuned in my basement. I prefer it this way. A customer getting new wheels at 7Twenty Boardshop.
Erika Righter
What are some of your favorite small businesses to support in Denver?

I love Blush & Blu, huge Mutiny fan, Herbs N Arts, FashioNation, Clocktower Cabaret — and the mission of Curbside Skatepark and how they execute is phenomenal.

Tell us about your block party.

October 15 is our annual snow block party, and it goes from 10 a.m. to 5 p.m. It is the snow season kickoff,  where we invite vendors, and people can ask questions about their products. We'll have a food truck, music and ridiculous sales on previous season’s equipment.


7Twenty Skateshop
135 South Broadway
www.7twentyboardshop.com
KEEP WESTWORD FREE... Since we started Westword, it has been defined as the free, independent voice of Denver, and we'd like to keep it that way. With local media under siege, it's more important than ever for us to rally support behind funding our local journalism. You can help by participating in our "I Support" program, allowing us to keep offering readers access to our incisive coverage of local news, food and culture with no paywalls.
Make a one-time donation today for as little as $1.