Ginny Williams was a major player in Denver's art world. Courtesy of Elle Williams
For decades, Denver art patron, donor and collector Ginny Williams, who died last fall at the age of 92, had fantasized about turning her long-closed-to-the-public gallery in Cherry Creek North at 299 Fillmore Street into a museum. And even though she never got around to actually opening it, distracted by becoming more deeply involved in the national art scene, she did assemble a collection for it.

With no plans for a museum in the offing when she died, the decision was made by her heirs to sell some of her art holdings. So over the next several months, Sotheby’s will be handling 450 pieces from that collection. The first of these, the crème de la crème of her treasures, are featured in a dedicated auction titled "The Ginny Williams Collection Evening Sale." The grouping comprises just eighteen lots, which will be sold beginning at 6:30 p.m. EST on Monday, June 29, in the auction house’s flagship salesrooms in New York.

Paintings and sculptures are included in this first round of the Williams sell-off, and these particular works prove that she was a pioneer in acquiring post-war modernist works by women. By getting there early, when a lot of choice picks were still available, she was able to score some genuine masterpieces in the category.

Helen Frankenthaler, Royal Fireworks, 1975.
Courtesy of Sotheby’s
On that topic is Helen Frankenthaler’s “Royal Fireworks” a majestic and monumental color-field abstraction done in 1975. Measuring five feet tall and thirteen feet across, it’s the size of a small billboard. The composition was created using Frankenthaler's signature staining method, in which thinned-out pigments are allowed to bleed into raw canvas. “Royal Fireworks” is composed of a richly stained gold ground with a swatch of pink and a little lavender at the top, but the anchor shade, the color that sets the whole thing off, is a bold smear of blazing turquoise that runs along the bottom. The Frankenthaler has an estimated value of $2 million to $3 million. Joan Mitchell, "Liens Colorés," 1956.
Courtesy of Sotheby’s
Also choice is the trio of abstract-expressionist interpretations of nature by Joan Mitchell, all of them exemplifying Mitchell's classic action-painting approach. “Straw,” from 1976, is ten feet high and more than six feet across. It’s covered in long, slashing strokes of various colors, with yellows and oranges at the bottom transitioning into blues and greens at the top, all of them set against an off-white ground. This painting is appraised at between $5 million and $7 million. Mitchell’s 1956 “Liens Colorés," though just slightly over four feet by six feet, is so fabulous that it has the same estimate as the much larger one. “Liens Colorés” is a riot of rapidly laid down brushstrokes and layer upon layer of paint splashes, runs and drips, conveying the idea that Michell created it while she was in a frenzy of mark-making. The last of the three, “Garden Party,” from 1961-’62, is also prime. At just over five feet by four feet, it's the smallest of the Mitchells and the least expensive, with an estimated cost of $4 million to $6 million. It's also more lyrical in its countenance than the other two, with cheery tones of greens and corals scribbled across the panel.

Lee Krasner, "Re-Echo," 1957.
Courtesy of Sotheby’s
There are two Lee Krasner paintings, both done during the artist's greatest period — the late 1950s, after her husband, Jackson Pollock, had died. Of the two, “Re-Echo,” from 1957, is the better one. The composition has a Picassoid quality, appearing to be a stack of overlapping abstractions of figures in pinks and browns, with a little green. The abstract forms are outlined, which is another tip of the hat to Picasso. Measuring a little less than five feet by five feet, it’s projected to sell for between $4 million and $6 million. The other, “Earth Green,” also from 1957, is larger, at approximately eight feet by six feet, and though similar in conception, it’s much less resolved, which explains why its estimate of $2.5 million to $3.5 million is so much lower. 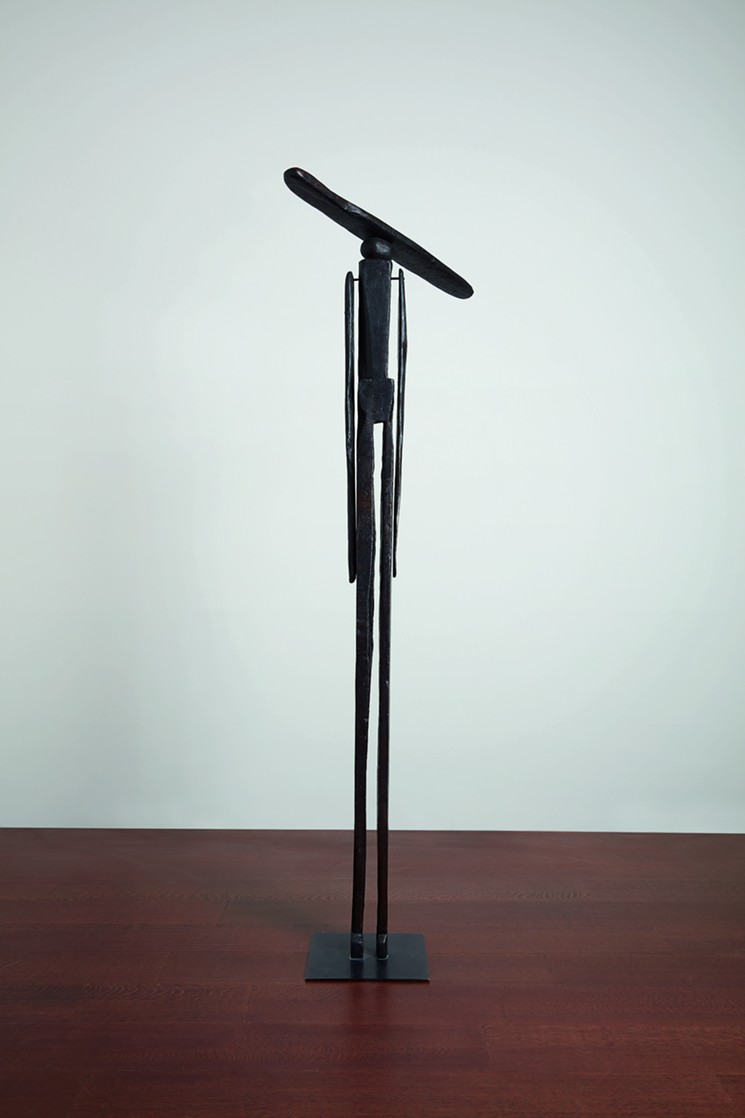 Louise Bourgeois, "Observer," 1947-1949.
Courtesy of Sotheby’s
Among the other gems are three sculptures by Louise Bourgeois, a favorite artist for Williams and one whom she knew personally. The most notable of the group is “Observer," a six-foot-tall 1980s cast of a piece from 1947-49. The style refers to African tribal art, Bourgeois's early source of inspiration, giving the simple figure with movable arms a totemic quality. The stack of shapes representing a tall and attenuated humanoid also pays homage to Giacometti. The pre-auction estimate is between $1.5 million and $2 million.

Reinforcing the idea that women artists were Williams's principal focus are paintings by Georgia O’Keeffe, Agnes Martin, Alice Neel and Yayoi Kusama. Williams didn’t limit her interest solely to pieces by women artists, however; her estate has also consigned works by men such as Donald Judd, Richard Tuttle, Ellsworth Kelly and Robert Rauschenberg.

Several of these works — including the Frankenthaler, two of the Mitchells and the major Bourgeois, among others — were displayed at Robischon Gallery back in 2016 in an exhibit dedicated to women artists called Declaration. Although the works weren’t for sale at the time, I suggested in my review of the show that the Denver Art Museum should figure out some way to get them, because the modern and contemporary collection could really use them. Oh, well...that ship has sailed.

Williams initially began her art collecting with a focus on photography, ultimately gathering up thousands of examples. Some years before she died, she gave the DAM a collection of photos that she had put together specifically for the museum. This special collection included both the works of internationally famous photographers and examples by important Colorado artists.

Interestingly enough, there aren’t any photos in this first sale, but there’s a subsequent dedicated sale, “Photographs From the Ginny Williams Collection” that’s set for July 14 in which some of her important photos will be offered.

It’s a real cultural loss to Denver that her fantasy Ginny Williams Museum, or whatever she intended to call it, never came together. But it is interesting to think that although the institution existed only in her mind, there was an objective reality to it, because she had already gathered what was going to be on view, as seen in this sale and those scheduled for the future.
KEEP WESTWORD FREE... Since we started Westword, it has been defined as the free, independent voice of Denver, and we'd like to keep it that way. With local media under siege, it's more important than ever for us to rally support behind funding our local journalism. You can help by participating in our "I Support" program, allowing us to keep offering readers access to our incisive coverage of local news, food and culture with no paywalls.
Make a one-time donation today for as little as $1.