Cameron Guse's "Endorian Flora" at 2017's Art Wars. Kenneth Hamblin III
This is the day you've been waiting for: May the Fourth. Outside of Comic Con, it's the year's best chance to fly your geek flag and let everyone know whether you see yourself as the imposing Vader, the self-reliant Rey, or the just plain emo Kylo Ren. Here are nine events to celebrate Star Wars Day. May the Fourth be with you.


May the 4th Party
10 a.m. to midnight
Boondocks
18706 Cottonwood Drive, Parker
11425 Community Center Drive, Northglenn
Neither the Empire nor the First Order are known for their playfulness, but you can embrace your inner Yoda, giggles and all, at this party. Come dressed as your favorite character for $15.95 admission (normally $31.95); you'll get three hours of unlimited bowling, go-karts, laser tag, miniature golf and more, plus free all-day play on Star Wars arcade games. Bonus: The deafening sound effects will truly make you feel like you're in the thick of battle. Visit boondocks.com for details about both locations.

May the 4th Be With You Customer Appreciation
Noon to 9 p.m.
Sol Tribe Tattoo & Body Piercing
How will anyone know your allegiance to the Dark Side if you don't have ink documenting it? Now's the perfect time to remedy that oversight (or add to your collection), as Sol Tribe is offering flash designs for $80 to $120 all day, plus discounts on piercings and jewelry (surely everyone can use Darth Vader on their daith piercing). Show up early, as customers will be seen first come, first served, though Star Wars movies and the 501st Stormtrooper Legion will be on hand to entertain you while you wait. The shop's Facebook page has the details for aspiring Darksiders. 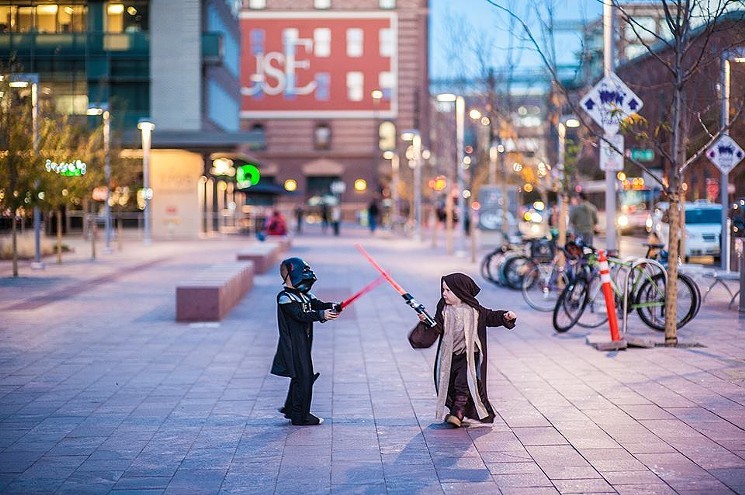 Courtesy Union Station Facebook page
Build a Star Wars Gadget
4:15 to 7 p.m.
The Gizmo Dojo
Every padawan knows you must eventually make your own lightsaber if you truly want to master the Force. Drop your apprentice off at a Jedi temple for the afternoon to create their own lightsaber using a kyber crystal (ahem...flashlight) and a nightlight — to keep the Dark Side at bay, naturally. Find out more about the workshop — your kid will be working with tools and LED circuits, so make sure he doesn't lose a hand — and sign up for $38 at Eventbrite.

Star Wars After Dark brings out the bad guys.
Brandon Marshall
Star Wars After Dark
6 to 10 p.m.
Wings Over the Rockies Air and Space Museum
Luke Skywalker may be a legend, but he's also a whiner (there, we said it). The heart and soul of the franchise are the cocky flyboys who bring swagger and wisecracks to the screen: Everyone loves Han and Poe. Honor the real heroes of the Resistance at this adults-only party in an actual hangar. Sadly, the Millennium Falcon won't be in attendance, but advance ticket purchase of $25 at wingsmuseum.org will give you a chance to sit behind the controls of Skywalker's (far inferior) X-Wing Starfighter. The rest of the night will be filled with live music, Star Wars trivia, a bounty-hunter training camp, droid races and themed bars.


Star Wars Team Trivia
7 to 9 p.m.
Govnr's Park Restaurant & Tavern
We'll give you a freebie: The answer is, "Han shot first." Make an appearance at the most wretched hive of scum and villainy in town for Star Wars-themed trivia. It's a team event, so show up with up to nine of your fellow Rebel scum to trounce the competition. Prizes include cash and tickets to Comic Con, so if you want to guarantee your spot, register in advance at triviaofcolorado.com; otherwise, you'll have to take your chances at the door. Find out more at the Govnr's Park Facebook page, and while you'd be forgiven for drawing a blank on episodes one through three (we've blocked them out, too), you might want to brush up on the backstory if you plan on galactic domination.


Turkish Star Wars
7 to 9:45 p.m.
Bug Theatre
Known to Western audiences as Turkish Star Wars, this movie is actually titled The Man Who Saved the World and bears no relation to the plot or characters of George Lucas's 1977 film — other than the blatantly plagiarized Star Wars footage used throughout the movie. The filmmakers are equal-opportunity pilferers: They also co-opted footage from U.S. and Soviet newsreel footage, as well as music from Raiders of the Lost Ark and Moonraker. This results in the surreal story of wizards, sexual tension in the form of smoldering glances (oh, hello, The Last Jedi), a golden brain and the Millennium Falcon. Snag advance tickets, $10, for the rare screening at brownpapertickets.com, or take your chances at the door for $12.

The Music of Star Wars
7:30 to 9:30 p.m.
Macky Auditorium
Travel to a galaxy far, far away (that would be Boulder) to hear what are arguably John Williams's most recognizable works: the scores to the Star Wars movies. The Boulder Chamber Orchestra and Boulder Chorale will be performing the most famous songs in the galaxy; stalk to your seat to the sounds of "The Imperial March" and sip your drink as "Cantina Band" plays in the background. For those who don't want to don a dark helmet or golden bikini to celebrate the cultural touchstone, this is the best — and most civilized — way to immerse yourself in the universe. Tickets start at just $15 at the University of Colorado website.

May the 4th Be With You
9 p.m. to 2 a.m.
Charlie's Denver
Padmé Amidala has nothing on the drag queens that will be at Charlie's on Friday night; their hairstyles are even more impressive, considering there's no entourage of royal hairdressers to create those gravity-defying ’dos. See the club's Facebook page for details on what's sure to be the most fabulous celebration of big, furry creatures and stiff lightsabers in town.