Wayne Winsett and the Time Warp mascot at FAN EXPO Denver 2022 Time Warp Comics & Games
Team-ups are a common trope in comic books. Two heroes come together to fight a single enemy, often one they might not be able to beat so easily on their own. And on Tuesday, August 9, the real-life heroes are Wayne Winsett’s Time Warp Comics up in Boulder and Denver artist Joe Rollman, who are coming together to support fellow comic-book lover Matt Henry in his efforts with the Walk to End Alzheimer’s.

Henry’s journey is a personal one. He began his group, Maggie’s Warriors, in honor of his mother after she passed in 2013. Maggie Henry was an elementary teacher, Girl Scout leader and devoted mother; in her late fifties, Alzheimer’s stole her opportunity to keep working, volunteering and knowing her three grandchildren or recognizing her own kids. Maggie's story is not uncommon, which is why the Alzheimer’s Association — and Henry — walks.

“After Mom passed, we did some serious grief-driven fundraising,” Henry recalls. “I’ve worn tutus, shaved my head, had purple hair, sported a mohawk and a reverse mohawk. We hosted two really successful ping-pong tournaments.” He says that the 2021 effort was a “sad one” because of COVID restrictions, which is why this year’s support from Time Warp's 55th Stream Sale in Support of the Walk to End Alzheimer's is so welcome. 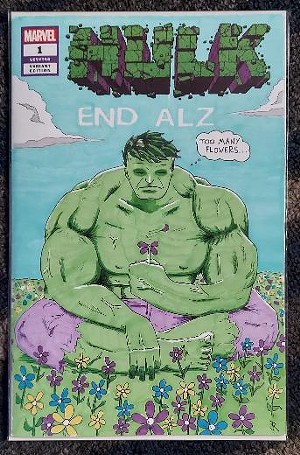 One of three covers to be auctioned at Time Warp's Stream Sale on August 9.
Joe Rollman
Rollman remembers how his collaboration with Time Warp first got started. “I met Matt through Wayne’s Facebook sale,” he says. “He contacted me and said he’d seen my artwork on social media, both for custom comic covers and my portrait work, and he wondered if I’d ever considered doing some work for charity. He told me about losing his mother, and how that left him with an overwhelming need to help.” The two hatched a plan for Rollman to create three custom covers to sell at the Time Warp stream sale, and donate the proceeds to the cause.

“I’ve had art in my blood for as long as I can remember,” Rollman says. “Although I hold a degree in art, I’m mostly self-trained. I think comic art can be a great way to highlight groups and individuals in need, as well as to help generate the donations these groups desperately require to move forward. I remember seeing comic books published in conjunction with UNICEF; this early introduction to the concept of charity is essential to gaining ground on any of these issues, whether it’s Alzheimer’s, homelessness or world hunger.”

So Rollman contacted Time Warp’s Winsett to ask about auctioning those three covers. “He was not only okay with it,” Rollman recalls, “he wanted to know how he could help.”

“The Stream Sales are an interesting way to engage with the comics community,” Winsett says. “I pick out about sixty items every other week from recent collection buys, our back room and my personal collection — interesting collectibles I know are rare, desirable or will appreciate in value over time because of its historical nature. I set the prices so they’re almost always a deal compared to how you’d find them elsewhere.”

Winsett says Time Warp will donate 20 percent of the Stream Sale proceeds to the Walk in addition to the funds raised by the three custom covers.

Winsett says this effort is nothing new for comics. “Comic book stores are always looking to contribute to worthy causes with food drives and other imaginative ways to make a difference in our communities,” says Winsett. “Every little bit helps. And wouldn’t it be great to conquer Alzheimer’s in our lifetime?”

Time Warp’s 55th Stream Sale in Support of the Walk to End Alzheimer’s, Time Warp Facebook Live, 4-6 p.m. Tuesday, August 9. For more information on Maggie's Warriors and the Walk to End Alzheimer's, see their donation page.
KEEP WESTWORD FREE... Since we started Westword, it has been defined as the free, independent voice of Denver, and we'd like to keep it that way. With local media under siege, it's more important than ever for us to rally support behind funding our local journalism. You can help by participating in our "I Support" program, allowing us to keep offering readers access to our incisive coverage of local news, food and culture with no paywalls.
Make a one-time donation today for as little as $1.