TRVE Brewing Is Releasing a Special Tarot Deck on Thursday 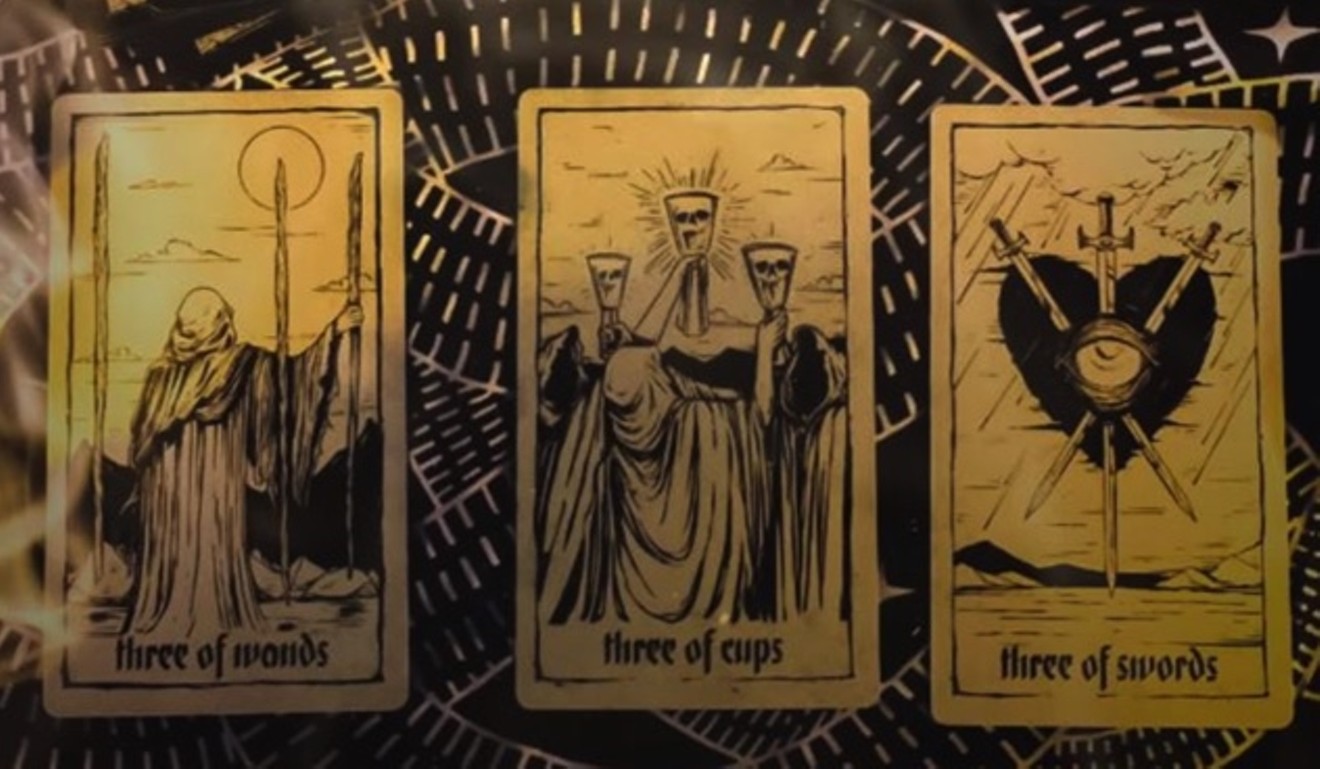 A preview of the tarot deck from TRVE Brewing designer Max Sherman. TRVE Brewing
A death-metal brewery, tarot cards and spiritual readings? It's a match made in oracle heaven, and on Thursday, January 19, TRVE Brewing will debut a special-release tarot deck while offering spiritual guidance and readings from 6 to 9 p.m.

The development of the deck has been extensive; it took TRVE artist Max Sherman about a year to design and draw all of the cards. “It was a ton of work putting it all together, but definitely felt like quite the achievement,” says Sherman.

The artist drew inspiration from the classic Rider-Waite deck, one of the most popular tarot decks in the world since 1909. Of course, he wanted to give it a TRVE-inspired twist. “I wanted the setting to feel medieval like the classic set, but with a sense of magic/fantasy,” says Sherman. “I liked the idea of some of these characters being 'otherworldly,' so it was really fun coming up with the different appearances for the entities in that TRVE tarot universe.”

Sakile Melchishua and Lainey, the Fated Healer of the East Colfax shop SpiritWays will provide readings for customers who purchase a deck. Melchishua describes herself as an intuitive oracle, and offers a variety of readings as well as soul song sessions. Lainey has been reading tarot for four years, and is a certified Usui Reiki Master. 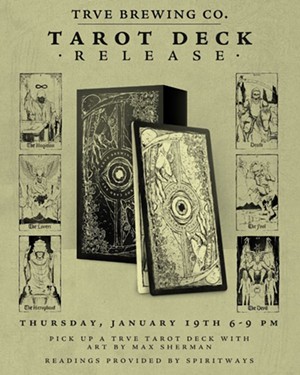 The card poster for the tarot deck event.
TRVE Brewing Instagram
TRVE founder Nick Nunns says that the idea for the tarot deck came from the company's COO. “We had printed a normal playing card deck, and we realized the maker also prints tarot, so we thought it would be something our customers would definitely be into,” he says. The announcement generated quite a lot of buzz both on social media and in person, meaning it might be a good idea to arrive at TRVE a little early on Thursday. “A bouncer at [a local bar] asked me when the deck is coming out. He said he came in last Thursday and got the date wrong,” says Nunns.

TRVE will be profit-sharing with Sherman on the tarot deck, Nunns adds: “With the amount of time and effort he put into it, we wanted to give him the bulk of the profit." Sherman does a majority of the design and labels for TRVE, a brewery with a distinct and much-lauded style, and is currently in the process of becoming the brewery's creative director.

Nunns says the event signals more big things to come from TRVE in the new year. “We have a lot of irons in the fire right now, and we feel like this year is finally getting back to the things we wanted to do before the pandemic,” he says. The event schedule for TRVE has been stacked, with a followup to December's Goth Night set for mid-February. Nunns promises some bigger announcements later this year, as well.

TRVE celebrated ten years this past June with a blowout metal anniversary show at the Gothic Theatre that included the likes of Khemmis, Dreadnought, Panopticon, Hulder and Vastum. It was the first big show for the brewery, which traditionally hosts anniversary concerts, since the pandemic. The business also welcomed Music City Hot Chicken into its taproom in August 2021, in what has been a fruitful partnership for both parties. The Fort Collins-based chicken shop has attracted some people who might not have come to TRVE otherwise, Nunns notes: “It opened up a whole new demographic for us. We’re seeing more families come in during the daytime. It’s fun to be able to offer something [for non-drinkers].”

But does that mean the bar that blasts heavy metal has lost its edge? "That," Nunns promises, "has not changed."

TRVE Brewing is located at 227 Broadway; for more information, visit trvebrewing.com.
KEEP WESTWORD FREE... Since we started Westword, it has been defined as the free, independent voice of Denver, and we'd like to keep it that way. With local media under siege, it's more important than ever for us to rally support behind funding our local journalism. You can help by participating in our "I Support" program, allowing us to keep offering readers access to our incisive coverage of local news, food and culture with no paywalls.
Make a one-time donation today for as little as $1.