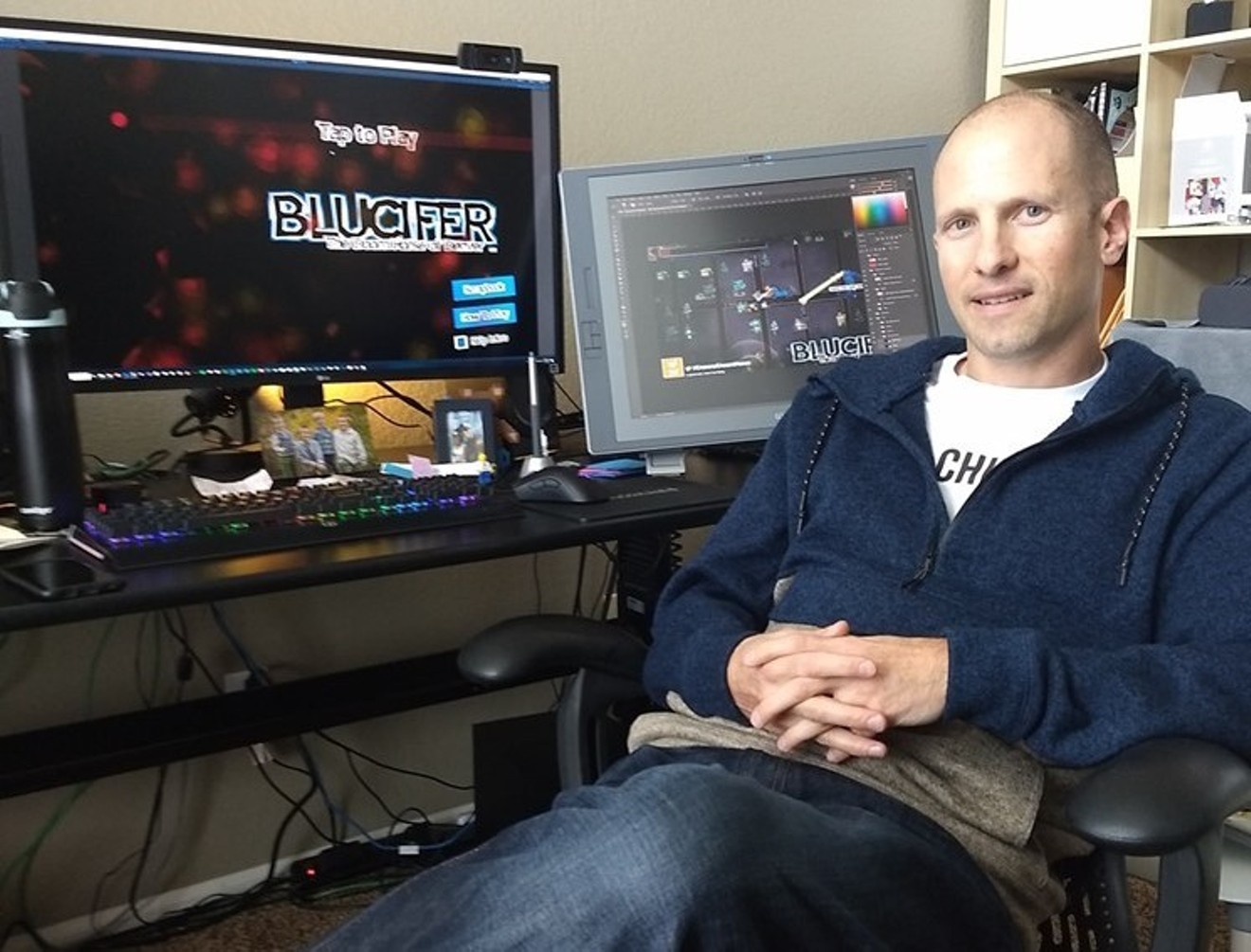 Ryan Seabury shows off his work on the soon-to-be-released Blucifer: The Doom Horse of Denver. Kera Morris
A mobile video game coming out this month includes one of Denver’s most hotly debated pieces of art, "Mustang," better known around town as Blucifer. The demonic blue horse with the hot, glowing red eyes at Denver International Airport has an unsettling history and legions of fans and foes.

Video-game designer Ryan Seabury recently spoke with Westword about why he decided to make the iconic horse the star of his new game, Blucifer: The Doom Horse of Denver.

Westword: Tell us about making Blucifer: The Doom Horse of Denver.

Ryan Seabury: I started it about five years ago and worked on it off and on, as often as real life allowed me to. It hasn’t been a continuous five-year effort. I actually had made another game, Rush ’Hower; that idea came from one of my kids asking me about the runaway truck ramps on I-70, when we went up to go skiing. And then I thought it would be cool to make other games about Colorado, that are specific to where we live and with little things you’d only know if you’ve lived or visited here.

Blucifer was an obvious choice, just because he’s become such an icon of Denver, whether you love him or hate him. I remember seeing that thing for the first time — I was just like, “What the eff is that?” — right out of the airport, and all this great conspiracy-theory stuff spun up around him. The story came out about the accident where it fell on the sculptor, and that just fueled the fire for people, for all the crazy conspiracy stuff. I guess that idea just kind of came next as this cool unique Colorado thing. Pop culture for Colorado. An instant obvious thing to me was, “What if he actually came to life and ran around Denver and destroyed it?”

That leads me to my next question: What did Denver ever do to you?

I love Denver! I’ve lived here almost 25 years now, and I describe this game as a sort of twisted love letter to Denver. Because as part of the development, I get to really get into the nitty-gritty. I actually hand-drew the streets based on map data and learning about the landmarks, and I’m really kind of spending a lot of time with Denver as a whole while making this game, which is pretty fun. And the destruction aspect is just kind of my inner child, my inner boy that’s like, “I love blowing stuff up!” So it’s building things and blowing things up. Creatively, that’s where it’s at — so I don’t hate Denver. I love it! This is sort of a way to obsess over it.
Is there a sequel potentially coming out for Blucifer?

One thought was that if people like it, if it gets traction with people around Colorado and Denver, it could be fun to take Blucifer to other big cities: Chicago, Los Angeles, New York. Just tossing those around as ideas, or maybe Boulder and Colorado Springs. Just do some other local trips for him. I can see that being a fun series of mobile games to make, and it would be fun for me, because I would get to explore other places I haven’t spent a lot of time in.

The real "Mustang," at Denver International Airport.
flydenver.com
What did you put into and get out of making this game?

I showed an early prototype of this a few years ago at Comic Con, and literally almost every single person asked me if they could destroy Casa Bonita. So I realized I had to put Casa Bonita in the game, and I had to extend the map way out there.

The game development engine I use is called Unity, and there’s a whole marketplace of developer-to-developer assets and things where other indie developers or small companies build little tools and things. So there’s an open-source map and data thing you can get, so I used that as the backdrop and then hand-drew over it all for game-play purposes. The actual streets, some are bigger, some are smaller, and I wanted sort of a Pac-Man-ish feel to the layout of the streets. So I took a few liberties here and there.

What happens when you run the game is, Blucifer will randomly spawn somewhere on the Denver map, and then you start the game from there. So the idea is...the first time you play, it’ll walk you through the basic backstory of who Blucifer is and why he’s an icon. Then it dips into the conspiracy theory of if there’s a demon or some evil thing trapped inside that horse. Then the idea is that a storm happens, and he gets struck by lightning, and he comes to life and starts destroying everything.

I tried to sprinkle in a variety of art pieces, skyscrapers, [and] commercial places everyone recognizes, like stadiums, Elitch's, some historical spots and public buildings.

If you follow the Blucifer Twitter account — while the game is playing, as the people run around, they’ll say random little things like “Thanks, Obama!” and “I knew I shouldn’t have had a second edible." I was thinking it would be fun to have people tweet what they would want to say in the game. So if people tweet at @DenverDoomHorse with the hashtag #BluciferRun with whatever their line would be, I will go through those tweets and look for any good ones and include them in the game.

What are your favorite games to play?

These days, as far as favorite games go, I play a lot of stuff with my boys. I have four boys; they’re ages eight to thirteen. And so they’re at a great age where there’s lots of stuff we can play together. There’s not one particular game that we play — I mean, obviously they love the ones all the other kids are playing, like Minecraft and Fortnite. I try to guide them into more quirky, fun, indie stuff that’s a little different from all the mainstream console games. We have just started playing a game called Heroes of the Storm, which is a fun team-based competitive thing with heroes. We play Robocraft, Stardew Valley — that’s a great little indie title. You’re a farmer, and I don’t know how to describe it. You actually farm, and it’s fun. But mostly I look for things that are quirky and different and weird. Creatively, that’s what’s interesting to me now. All the mass-market stuff is sort of derivative.

What got you into designing video games?

I always loved games as a kid, and probably the current generation of kids would find it shocking that it wasn’t necessarily always cool to play video games when we were growing up. I was definitely a super video-game nerd back in the day in my middle-school years with a Nintendo Power subscription, which was an old magazine for Nintendo. I had my rings; they sent you rings, if you were like a hardcore member. But I guess my thought as a kid was that I wanted to do one of two things, which was either to be an astronaut and go explore other worlds, or make my own worlds. I had bad vision, and I have a problem with authority, so I thought probably I’m not going to get into NASA, which really reduces my chances of getting into space. So I did computer science in college and sort of stumbled into video game connections with my first internship, with a software company.

One thing I try to stress with all my games with my company, good luck, have fun, my little indie company — it’s just me — is trying to do something charitable with it each time. With Blucifer, I’ll take a portion of sales and donate it to DonorsChoose.org, and specifically target Denver classrooms. Money that comes in through that organization is given directly to teachers and classrooms for projects they want to fund. They’ve done tons of great work all around the country, but my thought with this, since it’s very Denver-focused, is to direct that toward Denver metro schools. Just as a way to give back. So if you buy the game, for less than a cup of coffee you can significantly help kids around Denver and help invest in our education system. We’ll never vote for taxes to increase to do that, so here’s another way to do it.

Find out more about Seabury's company and his previous games at the good luck, have fun website.
KEEP WESTWORD FREE... Since we started Westword, it has been defined as the free, independent voice of Denver, and we'd like to keep it that way. With local media under siege, it's more important than ever for us to rally support behind funding our local journalism. You can help by participating in our "I Support" program, allowing us to keep offering readers access to our incisive coverage of local news, food and culture with no paywalls.
Make a one-time donation today for as little as $1. 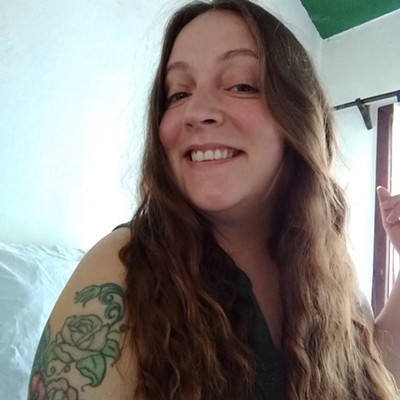