Past to Present: The Vintage Market Is Booming in Denver 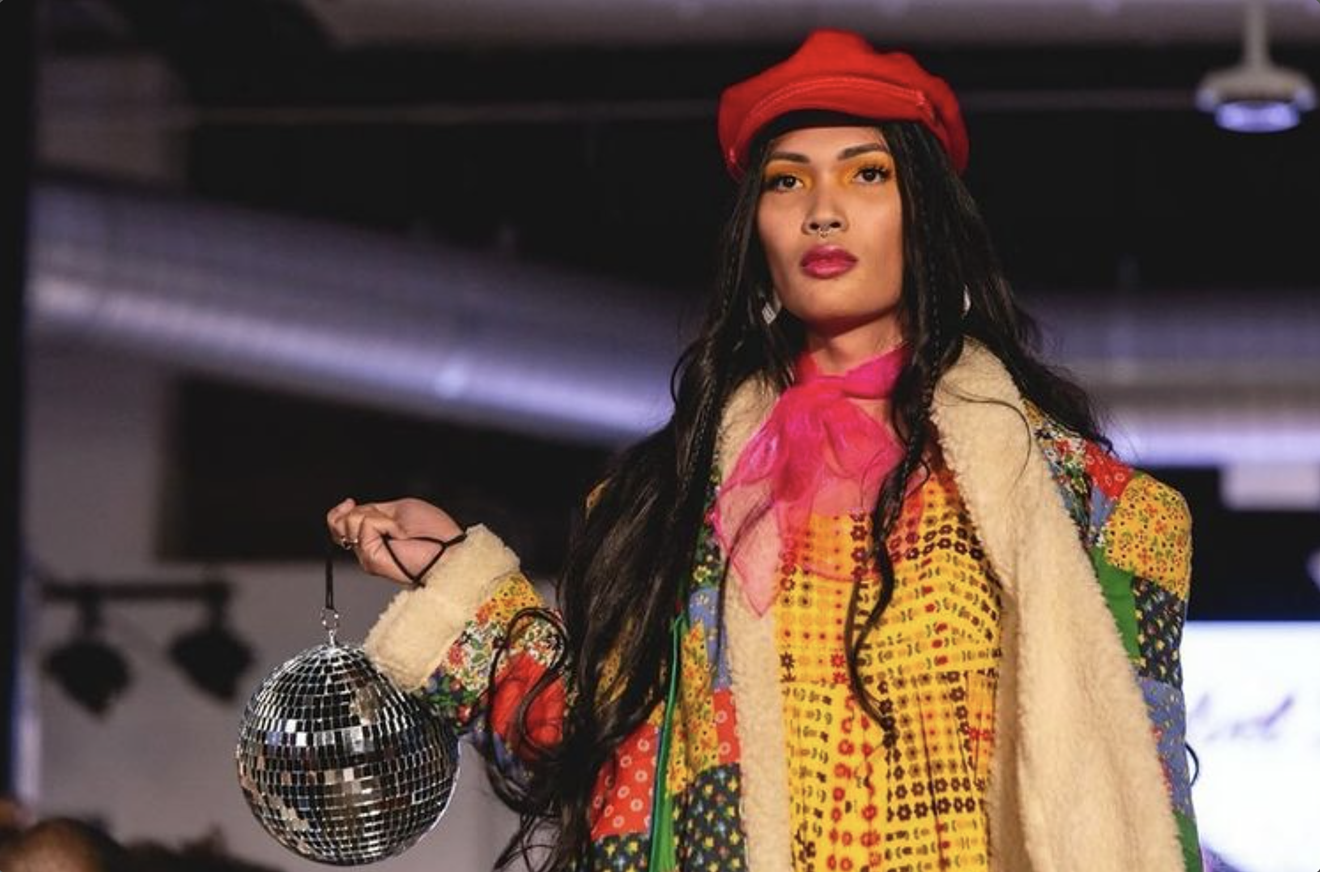 Cecily Cheesman's set at Denver Fashion Week used vintage clothes to reflect femme fashion through the decades. Jared Kennedy
Miah Richards has been in the vintage resell business for fifteen years. As he tells it, “If there's a place that you've ever thought about buying clothes,” he’s sourced from it. And “if there's a place you've never thought about buying clothes,” he’s bought from there, too. He’s even purchased a number of shirts off the backs of people walking down the street.

Finding thrifted goods is a passion for Richards, and last year he turned his online business, Fourth Place, into a physical shop at 144 West 12th Avenue. His ability to do so stemmed as much from his personal enthusiasm as it did from a quickly growing market for sustainable secondhand or vintage fashion in Denver.

Vintage is traditionally considered any item that is at least thirty years old. But the line between vintage fashion and quality secondhand clothing often blurs, as both styles prioritize the potential for long-lasting personal expression over the transient nature of fast fashion. The trend is becoming so popular that vintage and secondhand clothing have been seen on fashion runways, and some brand-name suppliers are even buying and reselling their own vintage clothes.

Fourth Place is a “house of style,” Richards explains. While many of the clothes are vintage, he wants to be known for the quality and cool style of his clothing first, and the breadth of his collection second. “That coolness and quality is the sustainability aspect,” he explains. “If it’s a piece of quality clothing, it’s going to last. If it’s cool, people are gonna think it’s cool in the next generation, too."

Richards grew up thrifting with his family in Cheyenne, Wyoming, and Sioux Falls, South Dakota, sometimes hitting garage sales in the morning and thrift stores in the afternoon. “If my family had a motto," he says, "it would be 'Guess how much I got this for?'” 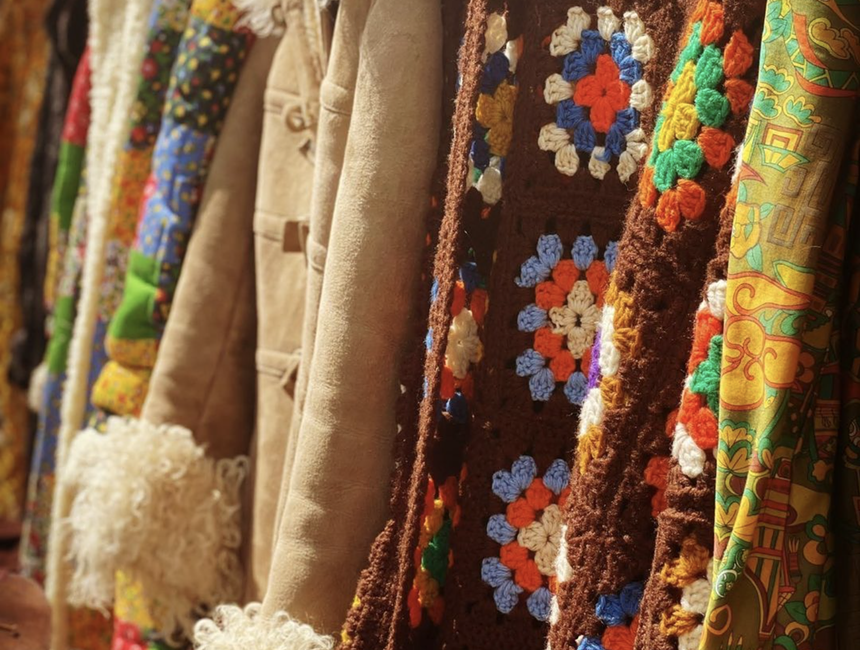 The vintage scene is growing in Denver as Instagram and more brick-and-mortars help popularize the style.
Cecily Cheesman
Shoes sparked Richards's foray into collecting. He wears a size fourteen, which is often hard to find. As a teenager, he spent hours on internet forums such as NikeTalk buying and exchanging shoes until he could find the right fit. “As organically as I could, I started from being just a kid with a bunch of shoes to a guy with a store,” he says.

Richards’s growth as a reseller parallels the growth of the vintage market in Denver. When he moved here in 2014, there weren’t many vintage stores, he says. But there was a large community of “pickers,” or people who would find vintage pieces and resell to places like Buffalo Exchange and Regal Vintage.

The market has gained traction during the past five years, partly from the popularity of items on Instagram and the establishment of more vintage stores in Denver. Goldmine Vintage, which was an established vintage store in Boulder, opened a location in Denver in 2017. The Ten Penny Store also set up shop in 2017, and La Lovely a year later. And in 2018, Mario “Mars” Conte, Ken Meade and David Bywater of Station (2014-2019) started ThriftCon, a large-scale vintage clothing and collectibles convention geared toward supporting individual vendors.

The first ThriftCon, hosted at Industry RiNo Station, had approximately 1,500 attendees and 60 vendors. By 2019, attendance had grown enough that the event was hosted at the National Western Complex. Conte and Meade now take the event on the road, hosting conventions in cities such as Houston, Philadelphia, Las Vegas, Atlanta and Los Angeles. There are typically 100 to 160 vendors and 5,000 to 10,000 attendees.

“We started ThriftCon in Denver to fill a void,” Conte says, “to bring things to the city that we saw happening in other places like L.A. and New York. There was a giant community trading and selling, and we got a space for everyone to get together and do that. 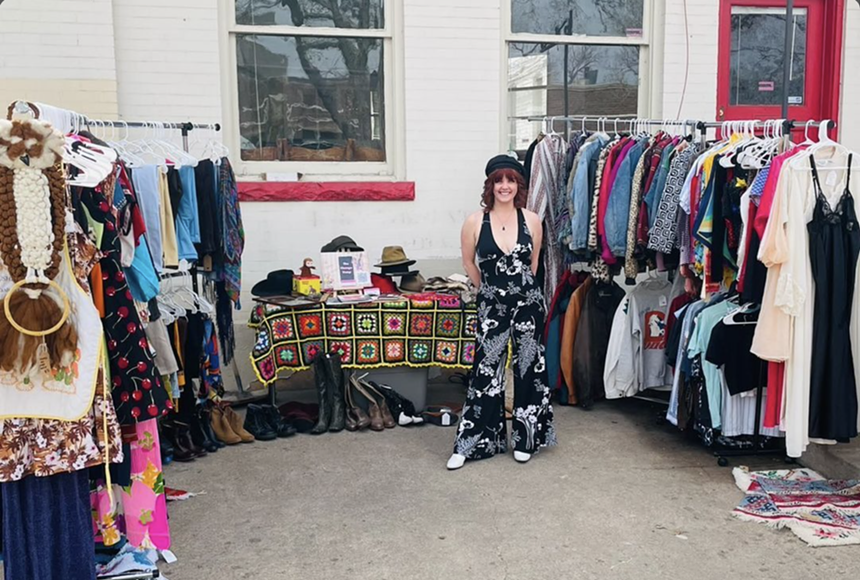 Cecily Cheesman has attended over thirty pop-ups this past spring, selling her wares as Vintage Vamp.
Claire Duncombe
“The whole community is really tight-knit, like any subculture,” he continues. “As you dig more into [vintage], there are so many stories to uncover. You’re learning about pop culture, you’re learning about history. There’s so much more to it than the garments themselves.”

Cecily Cheesman, who sells vintage clothing as Vintage Vamp, loves learning the nuances of fashion history. She moved to Denver from Houston in 2017 with the goal of working with clothes and styling, and got a job at Buffalo Exchange, where she learned about brands, construction and value.

The way clothing is fabricated often reflects the time in which it was made, she explains. For example, a single-stitch hem on a T-shirt often indicates that it was created before 1970, while an ILGWU zipper reflects that the piece was made by the former International Ladies’ Garment Workers’ Union, which formed in 1900 and merged with another union in 1995.

Cheesman particularly enjoys clothing details such as tags that inform the wearer not only where it was made, but where it could be cleaned — though that information is often many years out of date.

When Denver’s Buffalo Exchange shut down in July 2020, Cheesman was one of 37 employees suddenly out of work. But the moment became an opportunity to start her own Instagram storefront.

“Once Buffalo Exchange fell down, everyone spilled out and found other places to work,” she says. “Everyone has a very unique sense of fashion, and people were really able to embrace what they love doing.”

With Vintage Vamp, Cheesman focuses on feminine and romantic clothing. She’s often drawn toward velvets and silks, psychedelic patterns, Western collections and anything from the ’60s and ’70s. 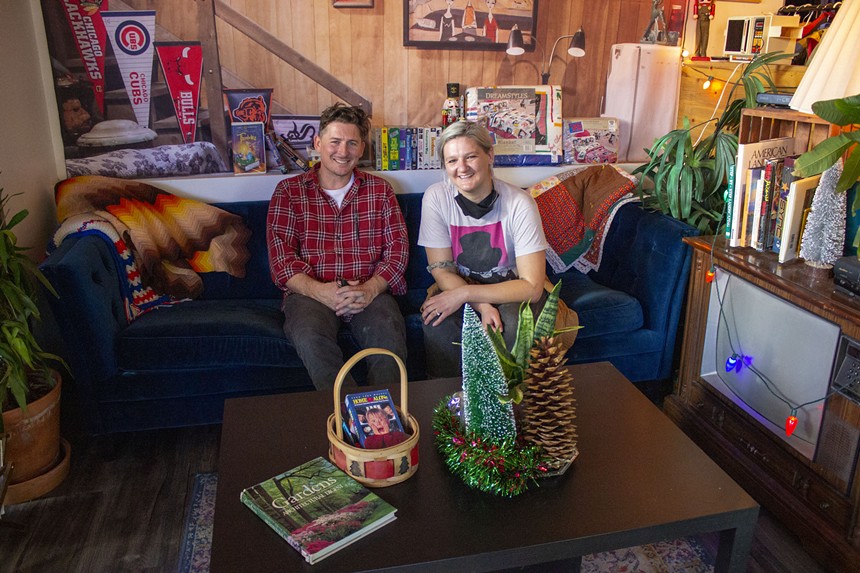 Owner Josh Sampson and vendor manager Lexi Wilson founded Garage Sale during the fall of 2020 with a key mission: to allow customers to have fun.
Claire Duncombe
Aside from her online store, Cheesman has attended at least thirty pop-ups this past year and has started selling at Garage Sale, a vintage clothing and vinyl shop and bar that opened in 2020.

Garage Sale hosts more than 45 vendors, who each curate their own rack. There's a lot of power in creating a shop through collaborative visions, explains merchandiser Lexi Wilson. “People gravitate toward different clothes. [Garage Sale] just kind of celebrates all that vintage can be in that sense, all the different styles and different decades all kind of melding together. It’s also just the fun of it.”

Over at Fourth Place, nostalgia creates a similarly welcoming atmosphere. “We’re a middleman between the open market and the nostalgic buyer,” Richards says. Although the majority of his customers are younger than forty, he loves it when older shoppers come in and see items they remember from their childhood.

“I think that people get into vintage because they really like vintage,” Wilson adds. “But then there’s the average shopper, whose values are shifting.”

Many customers are becoming increasingly aware of how the fast-fashion industry is damaging the environment. The Environmental Protection Agency estimates that more than nine million tons of clothing and shoes went to landfills in 2018. 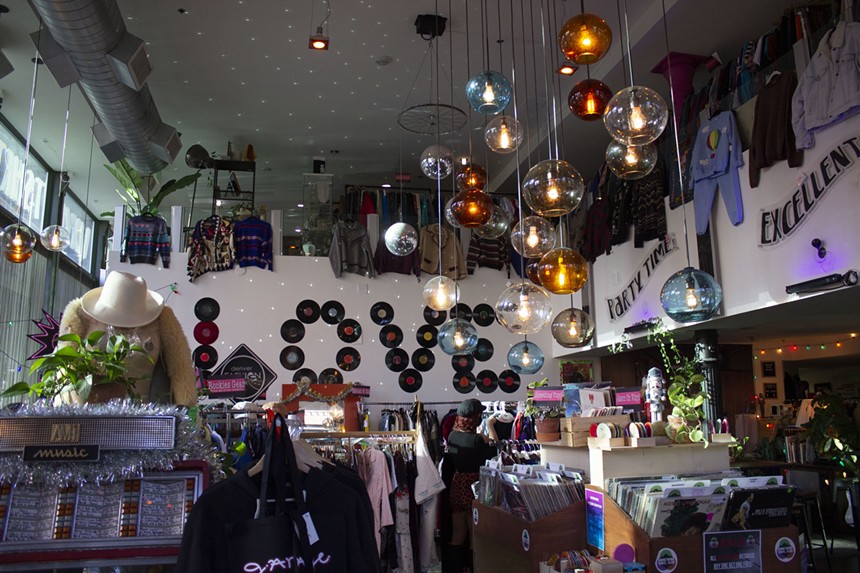 Garage Sale hosts more than 45 vendors, each bringing their unique sense of fashion.
Claire Duncombe
In November, a number of news outlets reported that at least 39,000 tons of clothes were dumped in heaps in Chile’s Atacama Desert. The U.N. Environment Programme writes, “The industry is the second-biggest consumer of water, generating around 20 percent of the world’s wastewater and releasing half a million tons of synthetic microfibers into the ocean annually.”

“The conversations surrounding sustainability and climate change and these giant existential questions that we have never faced before as a human race are really pushing people to look for small changes that they can make in their own personal lives,” Conte explains.

Sampson compares the consumer shift to buying vintage and secondhand clothing to the organic or local foods movement because they’re both centered on education: “Just like the food movement, if you learn about the way things are done on a big scale, you may or may not want to support that anymore. It’s voting with your dollars, and I can't emphasize how important that is.”

Garage Sale hosted a vintage showcase at Denver Fashion Week in November, and Cheesman was one of the eight vendors who curated a runway segment. She worked with Velvet Papillon for a set titled “Femme Fashion Through the Decades,” where models wore vintage outfits that reflected styles ranging from the eras of Cleopatra and Joan of Arc to some decades in the twentieth century.

"Having vintage and secondhand on the runway is recognition of the mindset shift that has occurred in regard to 'used' fashion — recognizing that something does not have to be new to have worth or be considered trendy or cutting-edge," Wilson says. "Showcasing looks at a fashion week event felt like real recognition of that progress, and an opportunity to show a whole new group of people what vintage and sustainable fashion can be."
click to enlarge 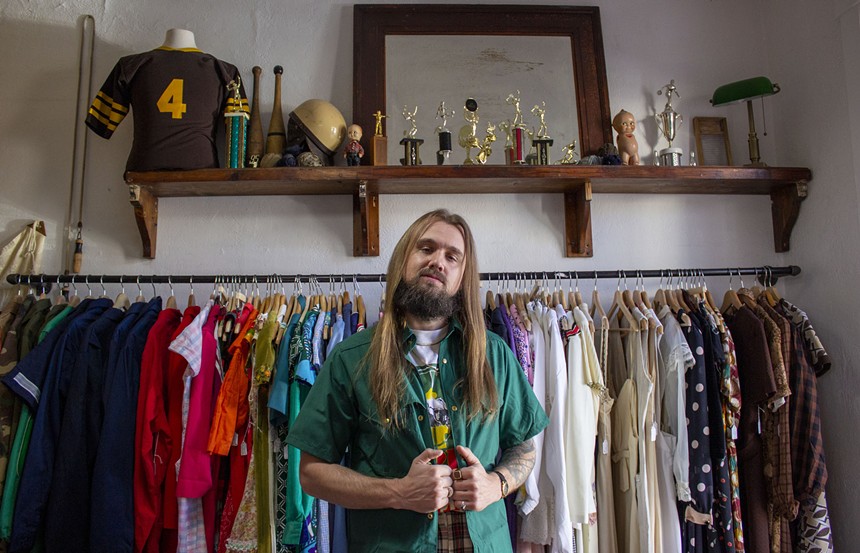 Miah Richards hopes his vast array of merchandise will allow customers to find a piece of clothing that speaks directly to them.
Claire Duncombe
"It’s a big deal to focus on fashion that is ethical, diverse [and] outside the traditional designer houses," Sampson adds. "And way more fun."

Designer companies are also picking up on the trend: Brands such as Levi's and Patagonia are buying and reselling their own vintage items. Some brands are even creating fast-fashion remakes of vintage items. For example, Target is selling mid-’90s Smashing Pumpkins band tees, and Free People is selling Nirvana shirts from the same decade.

But even though the look might be in style, it can be difficult to come across: Cheesman says that finding the right vintage piece feels more like something “the universe hand-picked for me.”

And shoppers like choosing their own style. “No one wants to pull up to the party and see someone wearing the same thing you’re wearing,” Conte points out.

“This kind of merging of style, like creating your own style from everything that's available from decades past — I don't think that's going to go anywhere,” Wilson says. “I think it's a really big cultural shift.”

ThriftCon will host its next Denver event in April; learn more at its Instagram or website.
KEEP WESTWORD FREE... Since we started Westword, it has been defined as the free, independent voice of Denver, and we'd like to keep it that way. With local media under siege, it's more important than ever for us to rally support behind funding our local journalism. You can help by participating in our "I Support" program, allowing us to keep offering readers access to our incisive coverage of local news, food and culture with no paywalls.
Make a one-time donation today for as little as $1.
Claire Duncombe is a Denver-based freelance writer who covers the environment, agriculture, food, music, the arts and other subjects.
Contact: Claire Duncombe