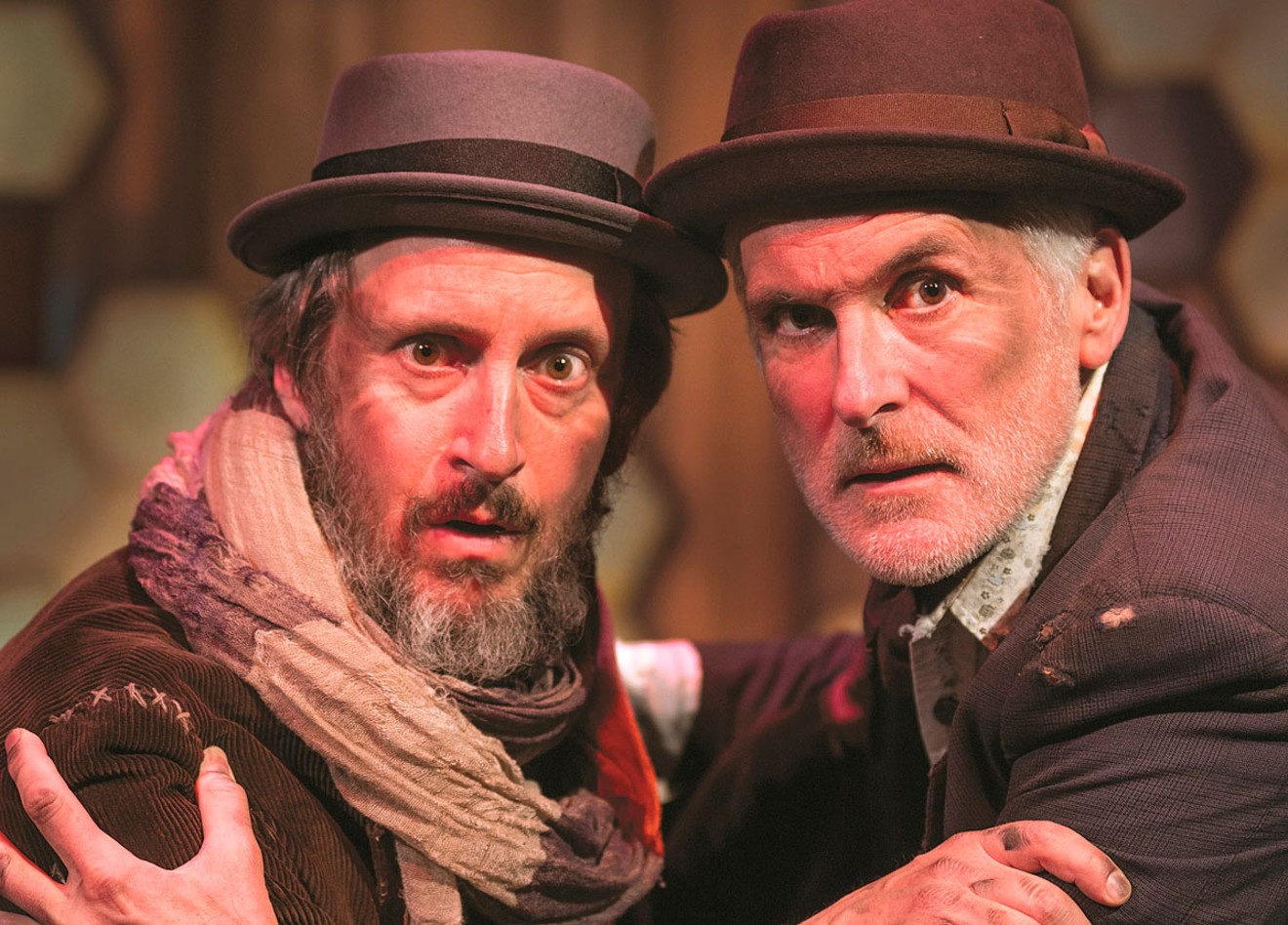 Timothy McCracken and Sam Gregory in Waiting for Godot. M. Gale Photography 2017
Eminent Samuel Beckett scholar — and fellow Irishman — Vivian Mercier famously described Waiting for Godot, currently showing at the Arvada Center, as a play in which “nothing happens, twice.”

It’s not quite true that nothing happens, though it is true that Godot is a sad evocation of the emptiness and futility of human life. And there’s a kind of extended vanishing to Beckett’s pared-down, elliptical language, too, as if he were continually trying to figure out what would be left if everything we knew and understood were stripped away. But paradoxically, Godot is also full of life and feeling. It introduces us to two men, Vladimir and Estragon, waiting on a country road for a man named Godot. They are bored to the point of desperation. They need each other and also drive each other crazy. Still, they can’t move on no matter how miserable their situation because they’re forced to wait for Godot, though they have no reason why. Who is he? They don’t know, nor does anyone else. Academics have suggested everything from God to an elderly bicyclist named Godeau who was always the last to finish the Tour de France. Every evening, a messenger arrives from this mysterious figure with the same message: Godot isn’t coming today, but he’ll come tomorrow.

Vladimir and Estragon pass the time as best they can. They play word games, talk both sense and nonsense, bicker. Estragon threatens to leave but never does. They contemplate hanging themselves from the sole tree in the area, but they have no rope — and Estragon’s belt is too short. Each of the two acts is punctuated by a dramatic visitation from Pozzo, who does have a rope. It’s around the neck of his slave, Lucky. In the first act, Pozzo is energetic and cheerful. By the second, there’s been a change, a physical disintegration, and a shift in the relationship between master and slave.

Beckett wrote Godot in French between 1948 and ’49; it premiered in 1953, and his translation opened in London two years later. The shadow of World War II darkens the action: The playwright himself lived in occupied France and worked with the Resistance, losing Jewish friends and fellow members of his cell to the concentration camps. He subtitled Godot a tragicomedy (“Nothing is funnier than unhappiness,” says a character in Endgame, another one of his plays) and incorporated clowning and vaudeville.

Most directors honor both the work’s humor and its sadness. But very few share Geoffrey Kent’s mixture of intellectual curiosity and cheerful iconoclasm, his delight in fiddling with minute details while also introducing big bold moves (Kent is known as a fight director) or his ability to sense the rhythm and poetry of a piece. The result is one of the best Godots I’ve seen: funny, lively, sad and moving, seeming simultaneously to take forever and to move rapidly along. Most important, it’s well cast. Sam Gregory is a light-footed Vladimir, the more philosophical and thoughtful of the two men. He’s constantly trying to keep up Estragon’s spirits — that is, when he’s not coping with his own painful prostate. His inexplicable cheerfulness at the beginning of the second act becomes doubly touching when that cheerfulness evaporates, revealing the soul-destroying misery beneath. Timothy McCracken’s mournful Estragon, in a continual fight with his own ill-fitting boots, provides a strong counterpoint.
Sam Gilstrap’s Pozzo is unlike any Pozzo I’ve encountered, and the same can be said for Josh Robinson’s Lucky. In his dark glasses, this Pozzo is the very image of a vicious, power-deranged South American dictator, yet he’s also oddly and fascinatingly jovial. From standing puppet-like and still early on, his mouth in an agonized O, Robinson takes Lucky in unexpected directions, too. (I’m not sure what it says about human nature that our shock and horror at his plight diminish steadily the longer he stands before us.)

Why does Vladimir play the kalimba, or thumb piano, an instrument with ancient African roots that’s sometimes said to symbolize the voice of the ancestors? Perhaps he found the thing in the trash somewhere and is experimenting. And perhaps when he hands it to Lucky — now silenced, I suspect, forever — he’s passing on something profoundly and essentially human. Whatever the reason, it’s this kind of inventive and evocative detail that dazzles.