The Muralists Painting at the Westword Music Showcase 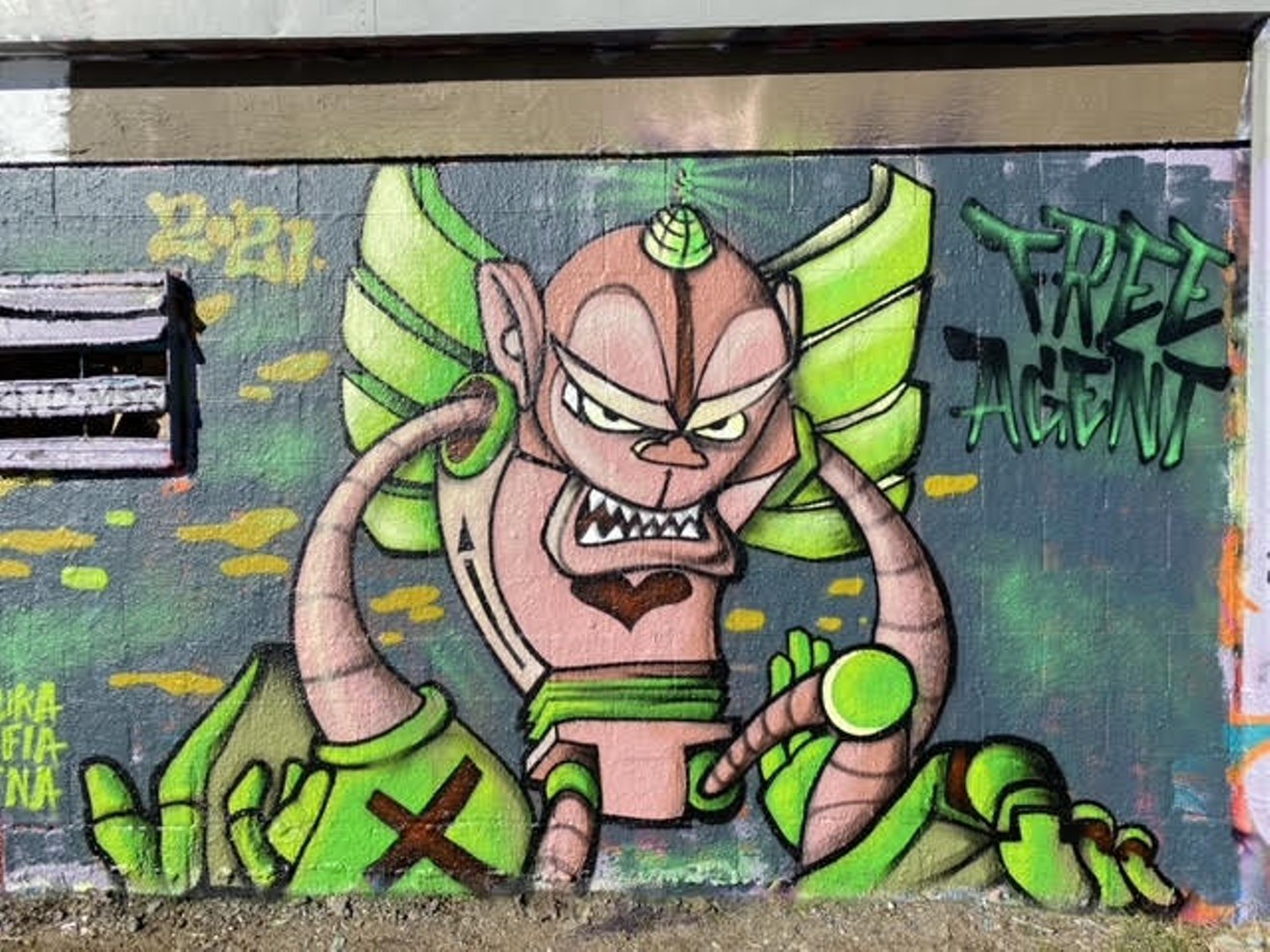 On Friday night, four top street artists will be painting at businesses throughout the neighborhood. These artists, selected by the RiNo Art District, will add to the area's growing collection of murals. Here they are, and where they're working: 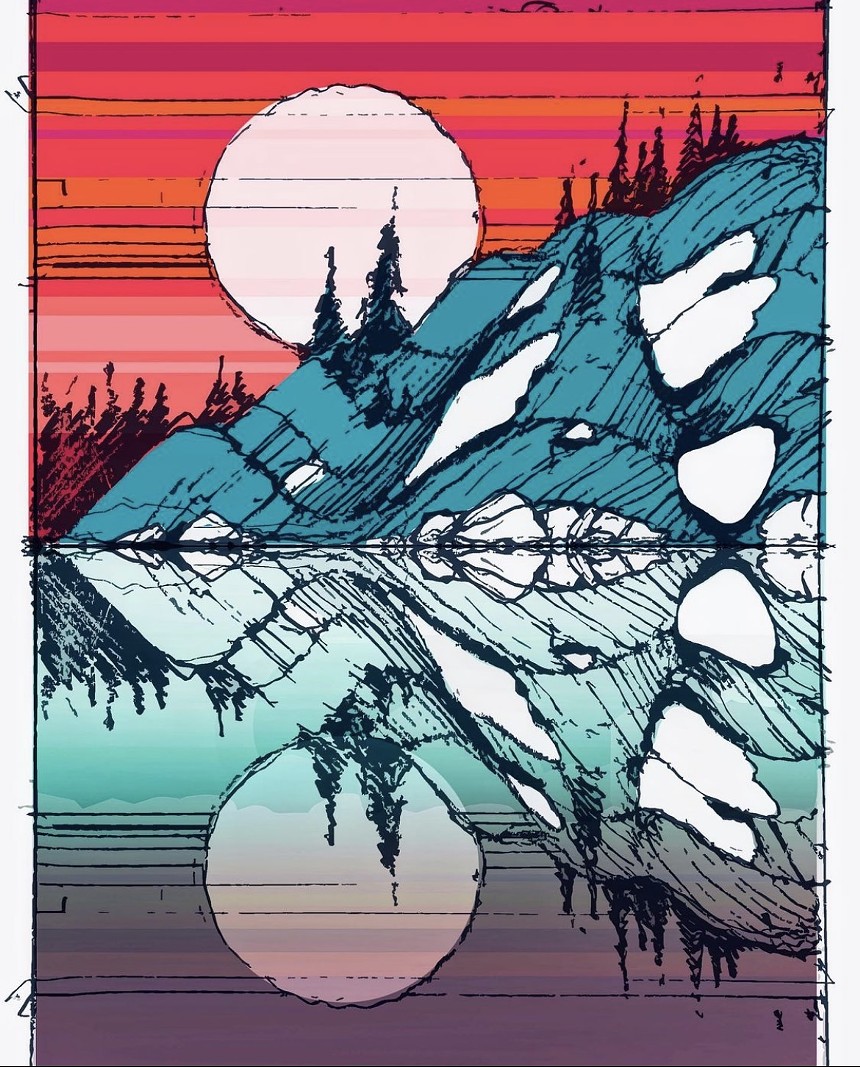 A Drew Button mural at Ironton Distillery.
Drew Button / Instagram / Courtesy of the RiNo Art District
Drew Button
Ironton Distillery & Crafthouse
3636 Chestnut Place
Lifelong Coloradan Drew Button, of DB Ink, set out in 2020 to become a full-time artist. He likes to consider how humans project personalities onto animals and nature, and his colorful murals depict dinosaurs and wild, otherworldly creatures of the sea, along with butterflies, ladybugs and landscapes. He has painted murals at Ironton Distillery & Crafthouse, Empourium Brewing, Bruz Beers and Mockery Brewing. During the Westword Music Showcase, he'll be returning to Ironton to do another piece.

Abstract painter Romelle is obsessed with the healing power of color.
Romelle / Instagram / Courtesy of RiNo Art District
Romelle
Number 38
3560 Chestnut Place
Detroit-raised, Denver-based abstract painter Romelle creates gesture-rich murals that explore the healing potential of color and the cities in which she paints. She's had residencies at the Forge and TAXI Denver, where she began using spray paint on canvas. When she's not painting, she works as the creative director of Babe Walls, a women and nonbinary mural festival, and obsesses over how art can aid both individuals and entire communities.

Chelsea Lewinski / Instagram / Courtesy of RiNo Art District
Chelsea Lewinski
ReelWorks Denver alley behind Tracks
1399 35th Street
In recent years, Denver muralist Chelsea Lewinski found fast fame in the city's street-art scene, with massive, stunning portraits of everyone from Georgia O'Keeffe to Bob Marley; she's painted at major mural festivals and businesses around town. But during the last Crush Walls, she broke her wrist in a scooter accident and wasn't able to resume painting until winter. Now she's back at it, and we can't wait to see what she'll be putting up on the wall behind Tracks during Showcase.

A work by artist Jorge Cuartas.
Jorge Cuartas
Jorge Cuartas
Bierstadt Lagerhaus
2875 Blake Street
Jorge Cuartas, who was born in Jamaica, Queens, and is based in Miami, is a Renaissance man. He prides himself on his skills as an athlete, editor, designer, illustrator and world-famous graffiti artist. "As a freelancer, I have worked in everything from Skateboarding, to Mountain Biking, Triathlons, BMX, Road Racing, and Motocross as a competitor, team manager, event producer, writer, designer, illustrator, and editor," he writes on his website. He's been painting graffiti since 1985, and by 1994 had work up in nearly every major city in the country. A master of wild-style lettering, Cuartas will bring old-school graffiti to Bierstadt's walls.

In addition to live painting, of course, there will be live music at the Westword Music Showcase. Dozens of locals will be playing independent venues, while headliners including Young the Giant, Thundercat, Matoma and Hippo Campus will be on the main outdoor stages, and Kaytranada and Duke Dumont will be inside the Mission Ballroom at a special-ticket event.

For the full lineup and more information, go to the festival website.
KEEP WESTWORD FREE... Since we started Westword, it has been defined as the free, independent voice of Denver, and we'd like to keep it that way. With local media under siege, it's more important than ever for us to rally support behind funding our local journalism. You can help by participating in our "I Support" program, allowing us to keep offering readers access to our incisive coverage of local news, food and culture with no paywalls.
Make a one-time donation today for as little as $1.