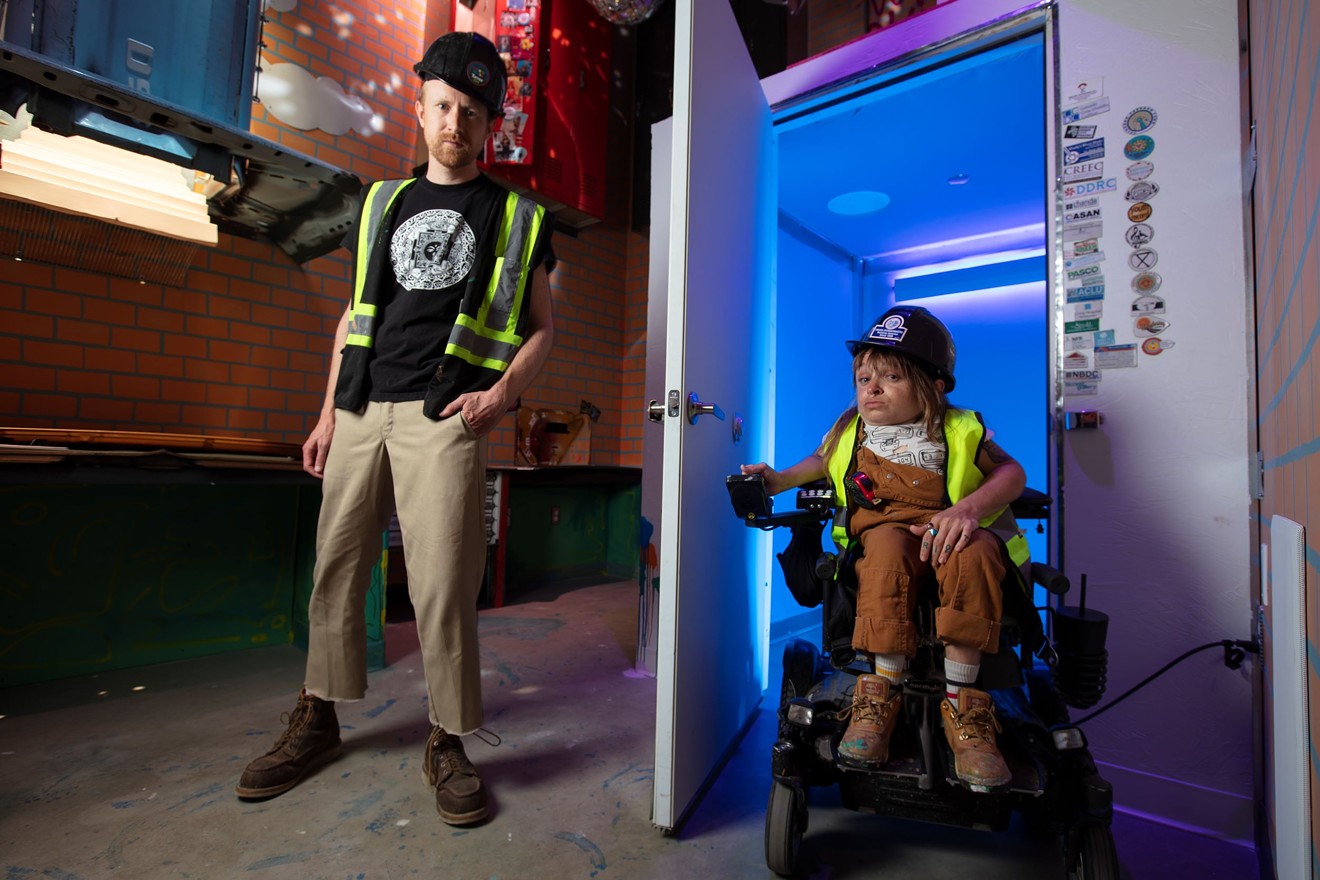 The head of experimental hip-hop band Wheelchair Sports Camp is headed out of Convergence Station, the massive immersive-arts installation at the junction of Interstate 25 and the Colfax Avenue viaduct, where she'd just put the finishing touches on what she calls the "Wheelchair Space Kitchen Time Portal.” It's one of seventy-some artist-built rooms that will be unveiled on September 17, when the 90,000-square-foot Meow Wolf Denver complex finally opens its doors.

Heffernan cooked up the idea of a sci-fi kitchen that pays homage to the storied history of Denver’s disability-rights movement four years ago. Outfitted in a hard hat and construction vest, she's spent the past year working with a slew of collaborators — including her union ironworker father, Jerry Heffernan — as well as bandmates and friends to build out the concept and ensure that it’s up to code.

Her space is intentionally designed to offer an exclusive experience to people with disabilities. Some narrative elements are only readable if you know Braille; parts of the room are designed for people who use wheelchairs— like Heffernan, who was born with the genetic condition osteogenesis imperfecta. As a result, those without disabilities will get a taste of what it’s like to live in an utterly inaccessible world.

Heffernan beams through her exhaustion: “It’s been wild. Wild.”

As she leaves the Meow Wolf building, she’s carving out time to chat before meeting up with 26 actors and crew members to rehearse her role of the Cheshire Cat in Phamaly Theatre Company’s production of Alice in Wonderland, a musical that Heffernan scored with her band. The mind-blowing soundtrack is as rebellious as anything Wheelchair Sports Camp has produced before, a daring work filled with rage and possibility. 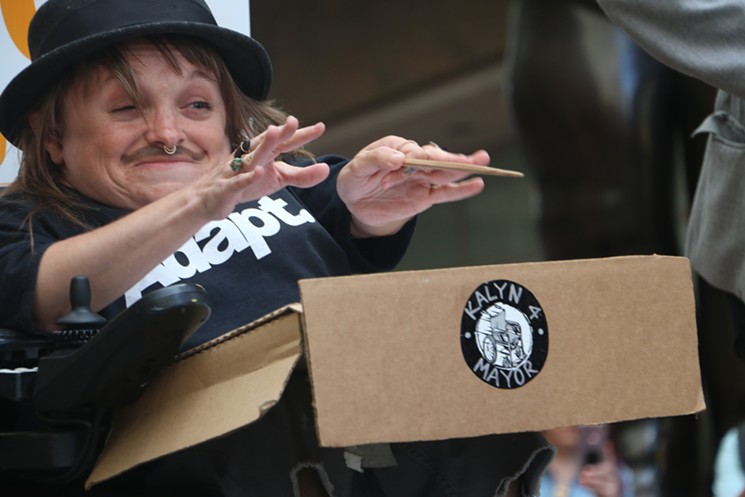 Rapper Kalyn Heffernan conducts a group of musicians protesting at the Denver Performing Arts Complex in 2019.
Kyle Harris
The show has been in the works for the past couple of years. The celebrated “disability affirmative” theater company had planned to debut the musical in 2020 at the Denver Performing Arts Complex — where Heffernan had conducted dozens of the city's best musicians in a jam session and protest against the Denver Center for the Performing Arts in 2019. The moneyed nonprofit had donated to the campaign fighting a ballot initiative to overturn Denver’s urban camping ban, a policy that Heffernan has long railed against, arguing that it criminalizes homelessness.

The thought of returning to the complex to perform had caused Heffernan some distress, but then COVID-19 scuttled those plans and the production was postponed indefinitely. Phamaly will finally unveil Alice in Wonderland on August 14 at Su Teatro Cultural & Performing Arts Center, the home of the historic Chicano theater company — a space switch that Heffernan finds downright thrilling, particularly because the venue has been transformed with greater accessibility in mind.

After years of rapping and collaborating mostly with people without disabilities, the chance to work with a cast in which everybody has a disability is exciting.

But how much excitement can one person handle?

“It’s fuckin’ back-to-back,’ Heffernan says of her schedule. “It’s a sprint to the marathon.”

Over the past few years, Heffernan has done more than many people do in their lifetimes. Before live performances were blocked by COVID, she toured the country with her avant-garde, jazz and noise-fueled hip-hop group. In 2017, she was arrested with members of ADAPT during a "shit-in," protesting then-Senator Cory Gardner’s attempt to repeal the Affordable Care Act in her first messy yet moving action with Denver’s longstanding disability-rights movement.

Then in 2019, she “rolled for mayor,” as she describes it, turning what started as an April Fools' Day prank into an actual attempt to unseat Mayor Michael Hancock. Wearing a fake mustache, a bowler hat and a T-shirt, she treated her candidacy as much as performance art as activism, defining the debate of that year’s election with pointed rhetoric about disability rights, homelessness and the city’s evictions of DIY arts spaces.

Through it all, she has taught beatmaking at music education nonprofit Youth on Record, led workshops and performed in prisons with her band, and protested killer cops as officers shot her and fellow protesters with rubber bullets during last summer's racial-justice protests. She fired back with art, blasting the police in her 2020 song "187bpm_demo,” which she followed with a brutal self-examination of emotional discombobulation in “YESS, I’m a MESS” and a stunning music video that accompanied the song (the first in a series of singles that she has in the works). Kalyn Heffernan of Wheelchair Sports Camp in "YESS i'm a MESS."
Chris Bagley
And now her Alice in Wonderland run with Phamaly will just have ended when Convergence Station opens.

“I was part of the first group that kind of gathered around Meow Wolf thinking about coming to Denver,” she recalls. “I wanted to know more about the accessibility and hiring of artists with disabilities.”

The first big Meow Wolf installation, House of Eternal Return, which opened in March 2016 in a former bowling alley in Santa Fe, had quickly drawn raves from across the country. Members of the ragtag Meow Wolf collective that created the immersive installation had ties to Denver's creative community, and Wheelchair Sports Camp was invited to play on the stage. “We already had a pretty close relationship,” she says. "They were really good to us.”

But then she learned that people with disabilities had largely been left out of design considerations. Much of the building was as inaccessible as it was fanciful, filled with rooms impossible for her to navigate.

“I was sadly disappointed,” she recalls. “So I had offered to kind of play with them and figure out some ways to make it better...at least on the first floor. But they told me in the future, they're gonna be a lot more accessible for future locations. And shortly after, there was another discussion between the Meow Wolf team, a big chunk of the creative team, and the CEO at the time.” 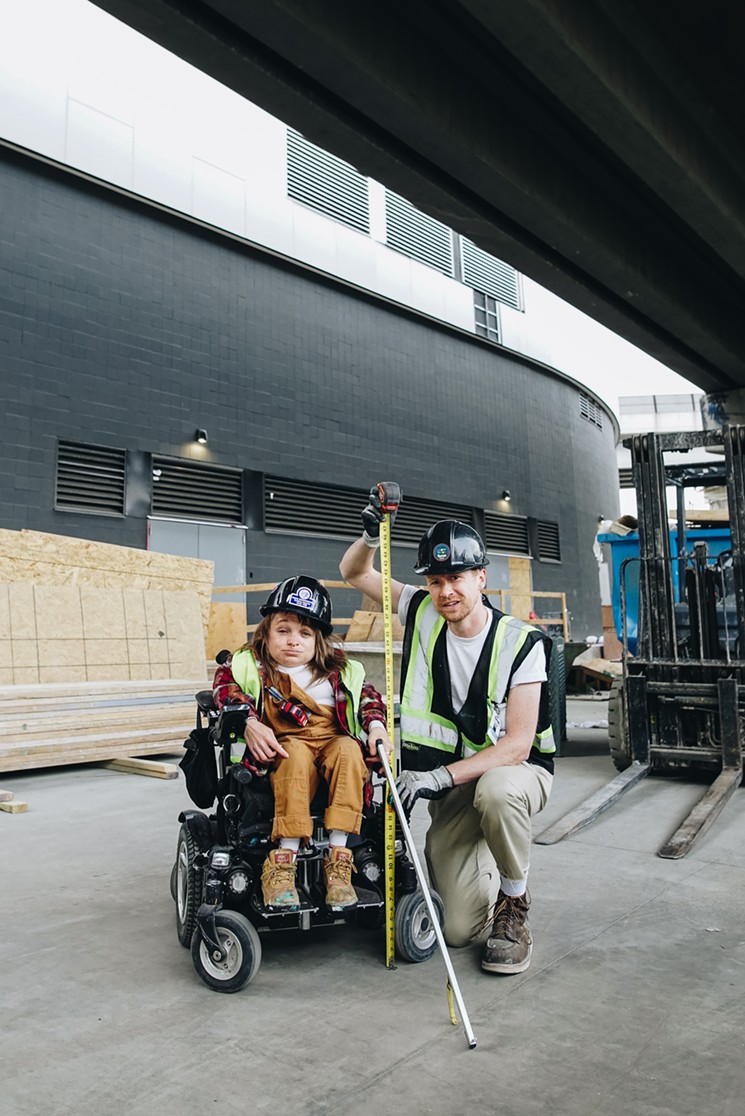 Kalyn Heffernan and Gregg Ziemba of Wheelchair Sports Camp at Meow Wolf.
Armando Geneyro
The conversations went well, and when Meow Wolf announced in early 2018 that it would be creating a Denver installation, the collective-turned-massive-entertainment corporation committed to work with artists with disabilities on spaces that would challenge visitors, and also to make the space more accessible. The architects added multiple elevators to accommodate wheelchairs and ensured that the vast majority of rooms could be easy for all to navigate.

But access was not Heffernan's only concern. After Meow Wolf picked its site, she warned that the giant project might contribute to the gentrification of the Sun Valley neighborhood and suck energy from the local DIY arts community.

She even took on then-Denver City Councilman Albus Brooks when he was hobnobbing at a Meow Wolf party. Heffernan had seen Denver's rabid development pushing longtime residents, including fellow artists, out of Five Points and other neighborhoods he represented. As Brooks and his friends were leaving, she chased them down.

"I cussed at them and told them my feelings in a very peaceful way," Heffernan said at the time, and they cussed back, assimilating to her rapper style. "I’m glad we could talk like real fucking people for a second."

With Meow Wolf about to open, Heffernan still worries about potential economic consequences of the installation.

“Yeah, I think all of my original concerns about such a massive project moving to Sun Valley from out of town was going to be messy and have serious impact forever...and that's still true,” she says. “Once we started getting deeper into it and seeing the progress in the interior and kind of liked it overall and looked at what is to come, it made me realize that so many visitors are gonna show up and not think twice about all the things I think a lot about.”

Unless they hear about those things from Heffernan. Even though she’s grateful for the chance to work on such a massive, permanent project, she's not about to keep quiet now.

“I’ve had a relationship with people at Meow Wolf that I’m still having conversations with about my fears and hopes to see this socially responsible corporation hold their values," she says. "Which is tricky. I am no corporate person.”

Learn more about Convergence Station, which opens on September 17, at meowwolf.com.
Phamaly’s Alice in Wonderland runs August 14 to September 5 at Su Teatro, 721 Santa Fe Drive. Get tickets and details at phamaly.org.
KEEP WESTWORD FREE... Since we started Westword, it has been defined as the free, independent voice of Denver, and we'd like to keep it that way. With local media under siege, it's more important than ever for us to rally support behind funding our local journalism. You can help by participating in our "I Support" program, allowing us to keep offering readers access to our incisive coverage of local news, food and culture with no paywalls.
Make a one-time donation today for as little as $1.