Podcast Profiles: Zeke Herrera of Who Wants to Be President?

Denver comic Zeke Herrera hosts the riff-driven Who Wants to Be President?, which drops new episodes nearly every Monday. Emily Coates
Podcasts are in tune with the democratized spirit of Internet media; anyone with a microphone and a computer can offer listeners unlimited hours of recordings, usually for free. Limited only by their imaginations, podcasters have a freedom of expression unrestricted by commerce, censorship or geography. Several great podcasts have blossomed in Denver's flourishing arts community; here to celebrate them is Podcast Profiles, a series documenting the efforts of local podcasters and spotlighting the peculiar personalities behind them. Though long dormant, the column has surged back to glorious semi-regular life, ending its hiatus with a profile of Zeke Herrera's Who Wants to Be President? podcast, which drops new episodes most Mondays.

Zeke Herrera, a comedian from California's verdant Humboldt county, first moved to Denver after falling in with a group of Mile High standups at the Savage Henry Comedy Festival, produced by the humor magazine of the same name. Though he still contributes the occasional article to Savage Henry remotely, Herrera is firmly entrenched in the local comedy community and has hosted a number of showcases around town, including the Sunnyside Brewhaha, at 8 p.m. on Friday, September 15.

Westword: This is still a pretty new podcast. Where in the election process did you start recording episodes?

Zeke Herrera: I think this latest episode is the fifteenth one. I've missed a couple weeks, so, yeah, it's only about seventeen weeks old. I started it a little bit after Trump got elected. It just seemed like something everyone was talking about, so I thought it would be interesting to see what people think. Everyone was talking about all the ways he was fucking up, and I thought it would be interesting to hear what they would do instead. Not really as a challenge. It's like I'm saying, "Oh, you guys couldn't do any better." I don't necessarily understand politics all that well, so it's become a medium for me to learn things and see other people's perspectives.

Before this election, would you say you'd never followed politics that closely?

I would say that I probably still don't follow them that closely, honestly. I watch the news occasionally, but usually just clips on Youtube or wherever. I probably only really started to even think about politics during Obama's first run. Before that I would just kinda listen to whatever everyone else had to say. I remember when I was in school, someone asked me, "If you could vote, who would you vote for?" and it was George Bush versus Al Gore in that election, so I said, "I don't know, probably Al Gore." And he said, "Al Gore is going to take away all the guns," and that was all it took for me to be like, "Nope, fuck that. I'd vote for Bush." And for a while I went around really thinking that George Bush was better.

So you were pretty easy to convince.

So easy to convince. I still am, I think.

That was the first election I really followed. I was sixteen, so I couldn't vote, but I was all ready to give a shit. And the results made me very cynical about politics right away.

Who was the second person George Bush ran against?

Kerry. He's the first presidential candidate I ever voted for.

That election was where I started getting cynical. I was older by then, and it was like, "This fucking guy again?"

Yeah. We all knew for sure that he sucked by that point. Okay, so what are two or three standout episodes that you'd recommend to a new listener?

Honestly, I just recently started getting good audio. I've been working on it; I didn't quite understand how it all worked at first. So I'd say that the first four episodes are pretty bad, audio-wise. Alan Bromwell versus Jason Keyes is an example of a good episode with terrible audio. The one I did last week, Lila Bear versus Jozalyn Sharp, is one of the better episodes we've done. Georgia Rae versus Miriam Moreno is another good one from when I was still figuring things out with the audio and the format. But these past couple weeks have been really good. Like for the first seven episodes, I didn't quite have the formula down like I do now. I used to do a thing where I would write down ten news articles, and I would try to have people guess the nouns, like a reverse Mad Lib. Like "blank destroys blank" is this thing – a midget or a pelican – and I would have them guess key nouns from every news article.

And that segment didn't stick around?

It didn't stick around because it didn't give the guests enough opportunity for riffing. It's basically a yes or no question with funnier answers. So I ditched that. It was funny, but it took the focus away from the guests, which I didn't want. I'd rather just keep the conversation going. 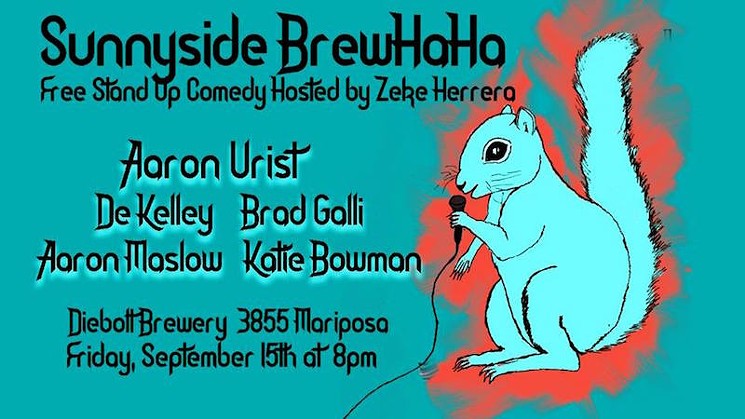 Allison Rose
Were the fake commercials part of the format from the beginning?

Yeah, I started a podcast.... I've been doing comedy for four years now, so it must have been three and a half years ago, and I did the fake ads from the very first episode. The first one was for Snapplebee's, which was just Applebee's-flavored Snapple, like, "Try the chicken fajita Snapple." So it's been a segment on every other podcast I've done. Alex Creasy and I used to have a podcast about movies, but it didn't really take off, because we couldn't get into the studio as often as we needed to.

The one at the Sexpot offices?

Yeah, it was at Sexpot. The first one never even aired. So this one is working better. I bought my own website, and I bought my own equipment, so I don't really need to go through anyone else now.

Did you have the idea of people voting for their favorite candidates from the beginning?

Yeah, I've always had people voting on Twitter be a part of it. I used to have a seven-day voting window, but it got annoying to have to keep retweeting it, and I don't want to bug my followers. So I just started opening up the voting on Thursday now, and it seems to be working better. More people are listening now. The first episode probably got like six votes total, but when I had Nathan Lund and Aaron Urist on, we got forty.

Do you have any plans to adapt the podcast for the stage or submit it to festivals?

Well, I submitted it to High Plains, but it was probably too late in the process. Also, I can only have two guests, and people don't really want that for comedy-festival programming.

Sure, they want to get as many comics on every show as possible.

I've also thought about submitting to podcast festivals, but I don't know if they have guests like me. I guess Syntax does a live podcast recording every once in a while, but I've heard it's the sort of thing where they ask you. But I'd love to do something like that. My rooftop show just got canceled, but I thought about doing it there.

Have any of the voting results ever surprised you? Do you ever disagree with the listeners?

Oh, yeah, all the time. With only one exception, when it's a man versus a woman, the woman wins no matter what. Same thing when it's a black dude versus a white dude. I think it's people just taking out their Hillary rage on the votes, you know?

Do you think people vote without listening to the episode?

Maybe. The reason I don't think they are is because more people vote when I get more listeners, so I think that the numbers would be different if people were just taking that poll for no reason. The numbers track mostly, so other than maybe one or two people, I don't think we're getting that many people voting without listening.

Have you been surprised by anyone's political beliefs when you were interviewing them?

I didn't expect Patrick Scott to say some of the stuff he said on the episode we just did. So that surprised me.

When I first started the podcast, I just wanted to get people to argue face-to-face, so I had Emily Zeek and Nic Dean on the first one, and they didn't really argue. They just acted like they were on a podcast and tried to make jokes. And I slowly kind of found out that it's a better podcast when people just get along. The more you like someone, the more comfortable you feel arguing with them and not worrying that you're coming off like a dick. Poeple on podcasts want to make jokes, and they're not ready to switch into a fight.

It seems like the format works just as well as a springboard for riffs as it does for a legitimate discussion.

Yeah, I kind of like a mix between the two. I'm always surprised by how much people know. People say stuff that I don't understand all the time, but some people just bury you. It's like when you're learning a new language and someone's talking to you. "Well I got one word, but I don't know what to do with all these other ones."

Check out new episodes of Who Wants to Be President? most Mondays.