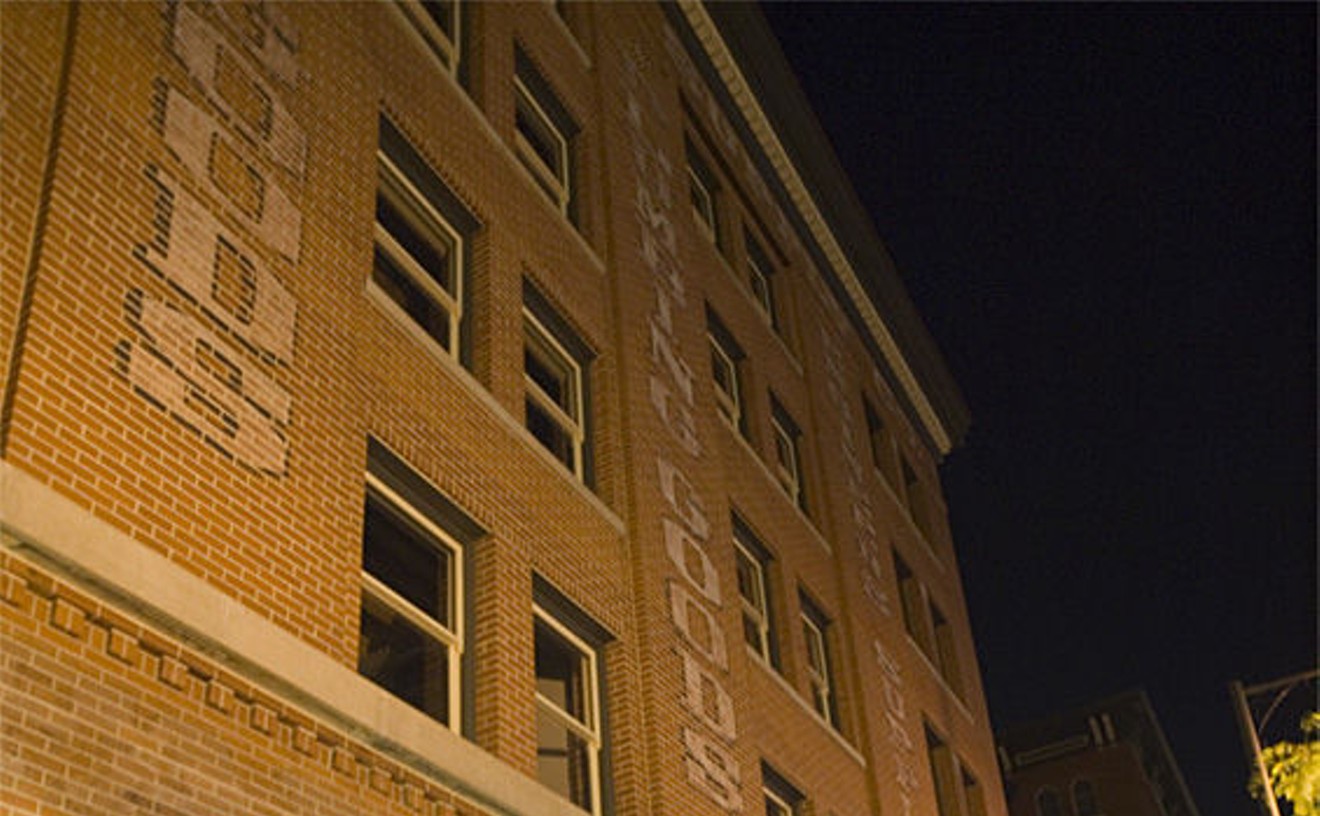 The Squeaky Bean may very well be Denver's most wickedly irreverent restaurant, which is just one of the reasons it's such an alluring escape when you need a mood-lifter that's legal. Owner and head bean-counter Johnny Ballen has a wonderfully warped mind that's resulted in the erection of a Farrah Fawcett shrine, a bingo billboard and the flight of helium-filled balloons through the room, ensuring that no one walks out in a cloud of bitterness. But while all of those things add to the Bean's magnetism, it's executive chef Max MacKissock's sensational cooking that really seals the deal. A healthy dose of playfulness — and provocation — prevails in everything he touches, from his modernized TV dinners and duo of grilled quail squatting on a Coors Light can to his Italian wedding soup, prepared so brilliantly that you want to weep. And then there's the profoundly innovative — and completely refashioned — "green chile" lofted with foie gras and downplayed with Fritos. MacKissock isn't afraid to drop culinary bombshells, and his risk-taking tendencies thus far have resulted in enthusiastic reviews from foodniks near and far. Few chefs understand exactly what it takes to make a palate soar like MacKissock does, and for everything he does, and everything he will do, we give thanks. 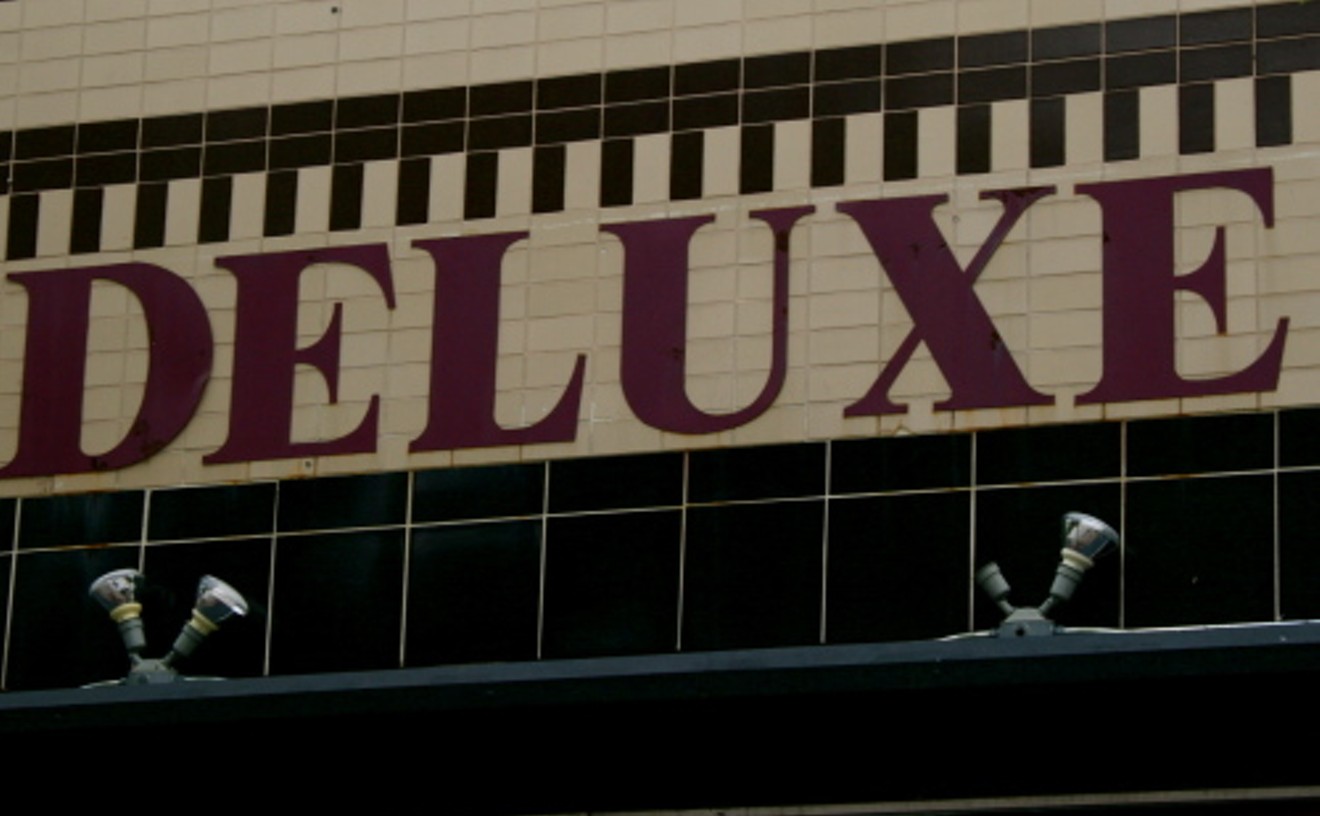 We like to live dangerously by hopping on a stool and taking in the controlled anarchy of an exhibition kitchen, specifically one that's as up-close and personal as the copper-topped chef's counter — the only thing separating the cooks from the customers — at Deluxe. It's pockmarked, scratched and a tight squeeze, with only a half-dozen seats, but it's also the best seat in the house for bantering with the crew, headlined by executive chef Dylan Moore, whose appreciation for peepers is apparent. A sign above the chef's counter reads "EAT" — and if you sit in Moore's domain, you'll eat beautifully, with the added benefit of observing a classy cast having as much fun as you are. 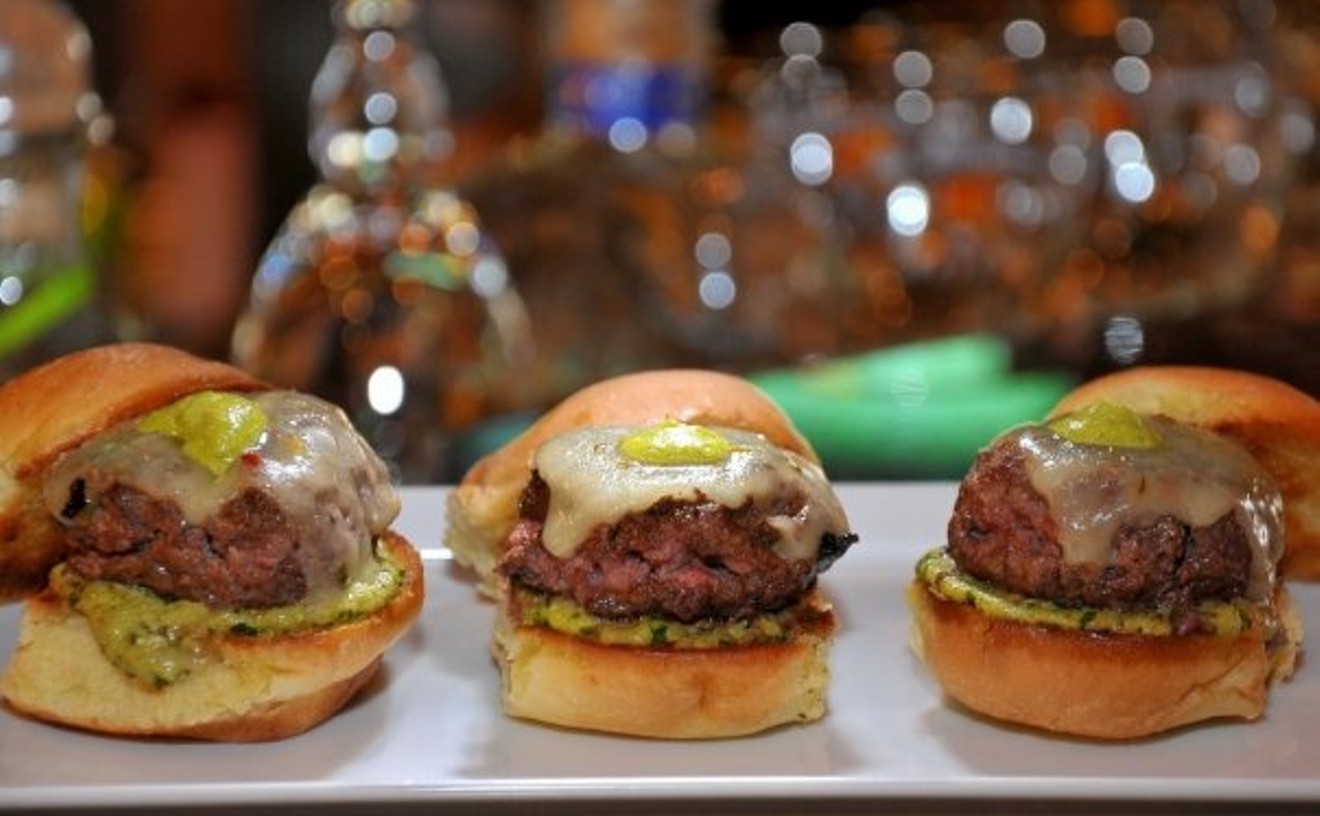 Considering the absurdly high number of chili cookoffs that take place in Denver, it doesn't make sense that it's next to impossible to find a butt-kicking bowl of the stuff at a restaurant. What's even more wacky is that the one chili that does bowl us over comes from the kitchen of Elway's Cherry Creek, a white-tablecloth steer palace that slings a $48 porterhouse, Japanese sea bass for $39, and a half-dozen oysters for just under twenty bucks. And yet for less than a tenner, you can swell your belly with chef Tyler Wiard's sensational chili, a cast-iron crock brimming with a brick-red stew thumped with oregano, garlic and cumin and shocked with the heat of numerous chile powders, whose blaze slowly sneaks up on you like a silent thief. It comes with all the requisite sidekicks — ribbons of cheddar, red onions and sour cream — but this is a chili that stands righteous without any embellishment. 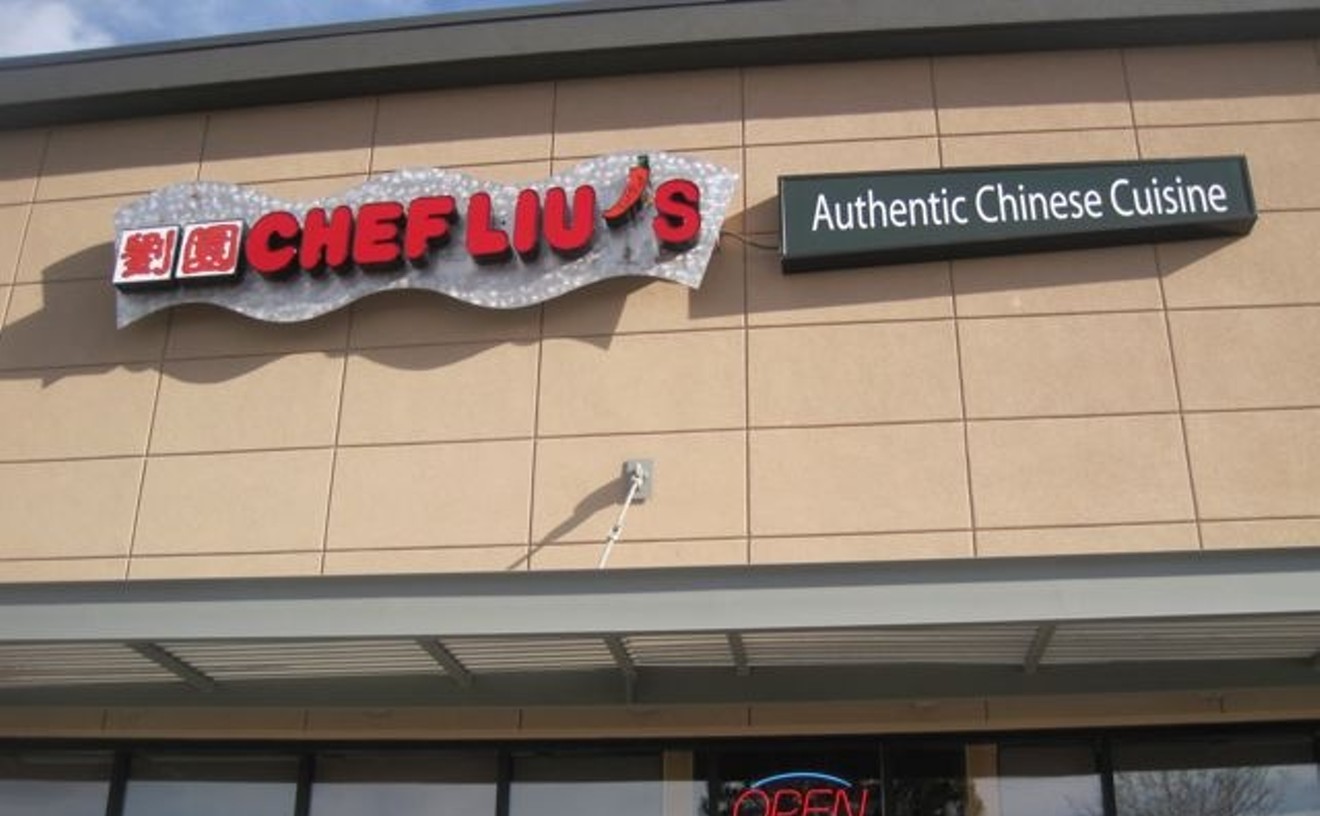 "Really? You want that?" The server's eyes grow wide and sparkle with mischief, and after patiently reciting the English translations from the "secret" Chinese menu, she cheerfully nods and scampers toward the kitchen, pausing just once to glance back for affirmation. Chef Liu's Authentic Chinese Cuisine is a shrine to familiarity and weirdness, where tofu skin and fried pork livers intersect with cumin-dusted lamb skewers, chicken blistered with chiles the color of the devil's burning ears, and Beijing-style pork bumped up with bean paste. The Americanized Chinese and Northeast Chinese dishes on both menus represent amazing breadth and depth, and even if you're one of those lucky people who pads your belly with Chinese food on a daily basis, it's safe to assume that when you stop by Chef Liu's, you'll discover an imperial lust for something entirely new. 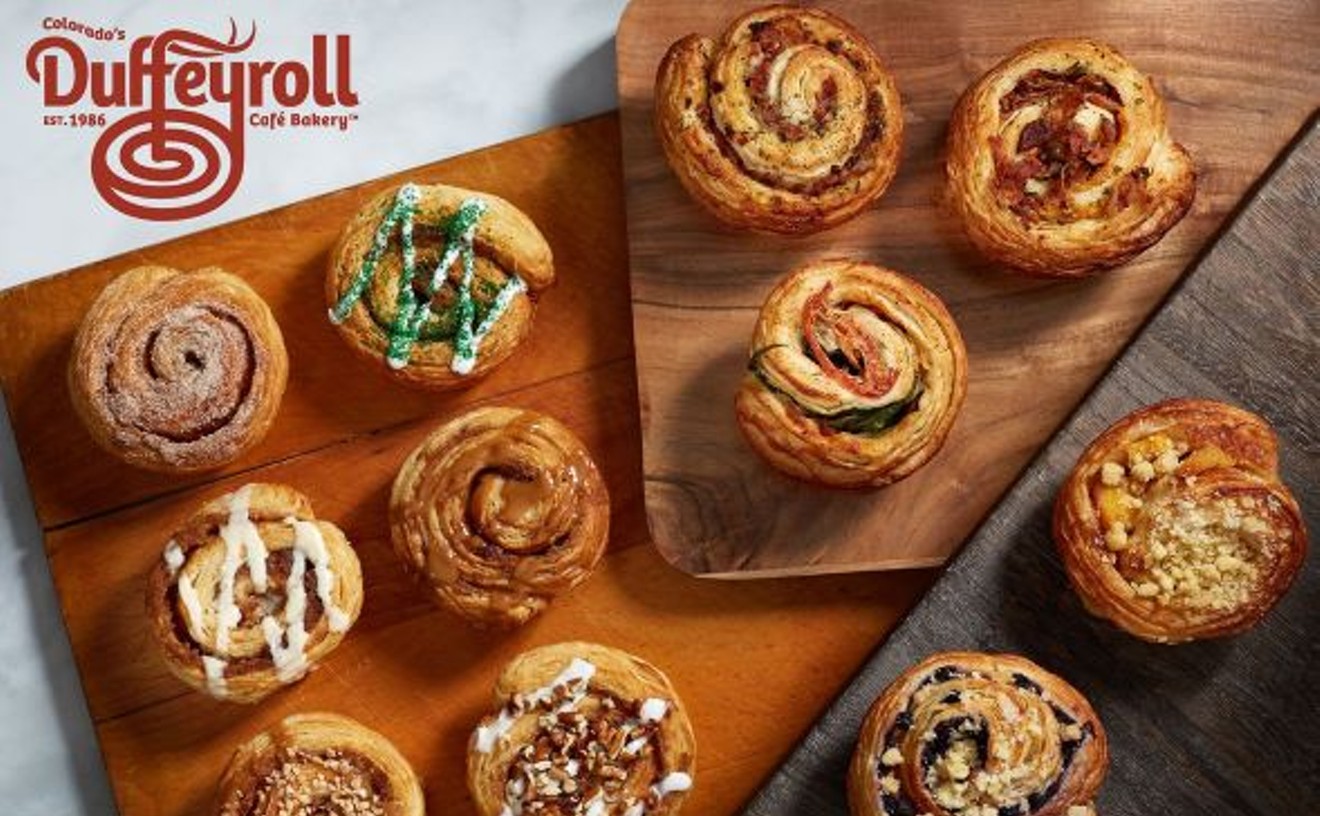 Nothing sates a cinnamon-roll craving quite like downing a fresh bun, still steaming from the oven, at Duffeyroll Cafe, a Wash Park breakfast shop with suburban offshoots. Hand-rolled with the ideal amount of cinnamon filling between each layer of fluffy, bready pastry, each bun is lightly crisped around the edges and just gooey enough with glaze — your choice of six different toppings. While we like the zesty orange, the rich Irish cream and crunchy, pecan-vanilla version, we're particularly partial to the original topping: a light and sugary coating that bolsters the taste of the pastry beneath.

Bittersweet is the blood, sweat and tears of chef/owner Olav Peterson, who opened his own restaurant after spending the past several years as the exec chef of Bistro One. His seasonal board is short but powerful, a direct, focused and ambitious stab at some of our favorite foods, including clam chowder. There are dozens of renditions around town, most of them a flat vat of cream and canned clams — but Peterson's is a stunning bowl of transcendence. He uses cream, to be sure, but the liquid, permeated with smoke, gets its unduplicated flavor from the liquor left by pounds and pounds of smoked mussels, as well as specks of bacon and other seasonings. Peterson then sinks a potato croquette into the chowder and crowns that with a razor clam and a full slice of crispy bacon that shatters into the superlative soup.

The eclectic array of rooms that make up Stella's Coffeehaus reflect the evolution of this spot since it first opened on South Pearl in the early 1990s, and every nook and cranny has its own rich personality that changes with the crowd. During the day, Stella's is ideal for work and study, when a pensive silence hangs over each table, most shared by strangers. At night, live music, board games and conversation dominate, as people catch up over a snack or stretch the night with one last, non-alcoholic drink. The sprawling porch in front is so lovely that the space is always packed in the summer and almost as frequently full in the winter, when heaters make it bearable to sit outside. For its always-warm ambience, Stella's is just our cup of tea. Aviano is the only Colorado cafe to source beans from Intelligentsia, a Chicago-based roaster with a cultish following that has just six shops in the country — three in the Windy City and now three in L.A. The beans alone get Aviano a lot of the way to a great cup of coffee, but owner Doug Naiman also trained with the obsessive staff of Intelligentsia, who will throw out any latte or cappuccino that doesn't have art. Because art, it turns out, is a reflection of how well the foam is made. At his own coffee shop, which moved to Cherry Creek last year, Naiman's obsession is manifested in his brew-to-order pourover bar, his refusal to make blended drinks and his insistence that all shots of espresso be enjoyed immediately...and in porcelain. He's a stickler for the rules, but they result in a perfect cup of coffee, every time.

Best Coffeehouse for Finding a Date 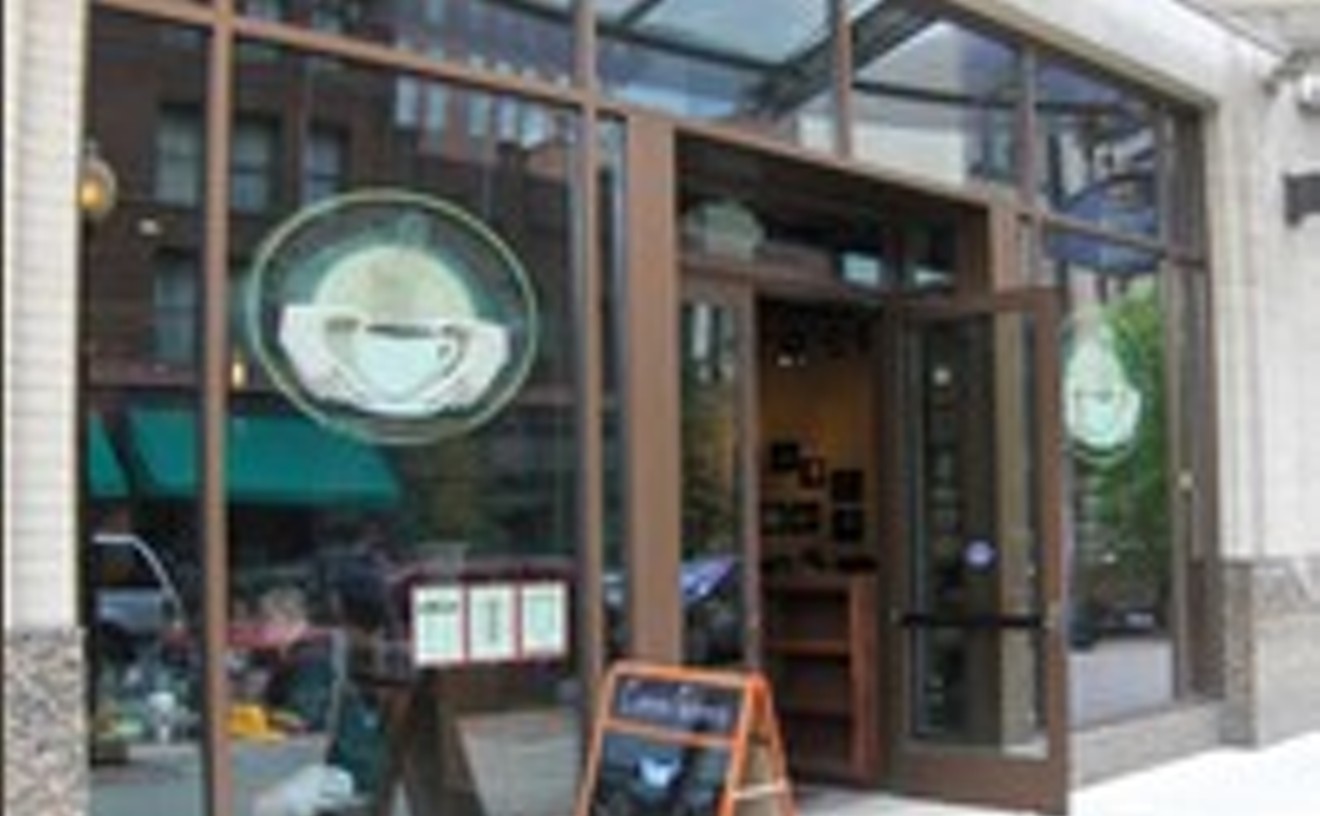 A regular gathering spot in a busy stretch of Highland, home to some of the town's most eligible bachelors and bachelorettes, Common Grounds is teeming with people from all over the neighborhood at just about every time of day. Young singletons walk their dogs over for a cappuccino, students and solitary workers hack away on laptops in the corners, and groups of friends gather over weekend pastries. And because socializing is so easy in this crowded shop, first conversations are often struck up when two strangers are forced to share a table and romantic excursions sometimes planned at the cream and sugar station. Get ready to spoon.

Lola has always embraced the power of the ocean, turning out coastal Mexican food in a city — as people will annoyingly remind you — framed by waves of mountains. But co-owner/executive chef Jamey Fader knows his way around a fish, and he's cast his net far and wide to hook seaworthy creatures that are the prize of his new cold bar, a few yards of counter space tucked into a tight corner on the edge of the dining room overlooking the patio. The four stools facing the cold bar could be the hottest seats in town, the perfect spot to order a flight of ceviches, tart with citrus; beautifully fresh ahi tuna carpaccio; briny oysters on the half-shell or snowy white ono festooned with pineapple kimchi, avocado and microgreens.