Best Board for Locavores

Denver-based manufacturer Never Summer Industries marked its twentieth anniversary in the snowboard business with the addition of the Proto CT, a springy new all-mountain freestyle board that ruled this season's demo days and earned top reviews. Like all boards in the line this year, the Proto CT is made in Colorado and features Never Summer's patented Rocker Camber Technology, a profile shape that floats on powder, rules on the rails, and helps even beginner riders avoid catching an edge and face-planting under the chairlift. It's also loaded with slope-tech like "Carbonium Laminate Technology," "STS Pretensioned Fiberglass," Never Summer's "Superlight" wood core, and a "graphite-impregnated Sintered 5501 base." Translation? The Proto CT has both pop and pep, offering a lively ride in the best and worst conditions.

Rookie defensive sensation Von Miller forced a fumble on his very first NFL play, was named AP Defensive Rookie of the Year, recorded 11.5 sacks, played a couple of games in a cast and was named to the 2011 Pro Bowl. Not bad. Off the field, the bespectacled Miller was the picture of poise. And while Tim Tebow was certainly the spark that the Broncos used to fire themselves up for a mid-season turnaround, Miller was the fuel. The Broncos will be Peyton Manning's team come September, but its orange-and-blue heart beats behind jersey number 58.

The world — well, the International Olympic Committee, anyway — was watching when Boulder-based USA Climbing hosted the International Federation of Sport Climbing Lead Climbing World Cup in October at Movement Climbing + Fitness. It was the first time the competition has been held in the U.S. since 1988: Sport climbing is on the shortlist to become an Olympic medal sport, and the IOC had to have liked what it saw at Movement. The three-year-old Boulder gym has become an indoor mecca for Colorado's climbing community, thanks to the work of climbing-wall designer Cort Gariepy and the Rockwerx Climbing crew. It also features TechnoGym equipment, a room full of Saris CycleOps machines, and a first-rate staff of personal trainers. Wondering how the World Cup climbers get into some of those positions on their way up the wall? Check out Movement's full complement of yoga classes, including Acro Yoga sessions that incorporate elements of Thai massage, active inversions and partner-supported acrobatic positions. We tend to forget about University of Denver hockey coach George Gwozdecky because he is so consistently excellent. But his team was ranked in the top ten nationally and made the playoffs. Again. Although they exited after the first round, DU has won two national titles with Gwozdecky at the helm, and this year he juggled three capable goalies, each of whom started at least ten games. Gwozdecky also coaxed solid play out of a young roster: Juho Olkinuora, the goalie who logged the most minutes in net, is a freshman, and the team's second, third and fourth leading scorers are all underclassmen.

Let's not go nuts here because John Fox led the Donkeys to a .500 record in a crappy division, but he gets credit for not doing what so many coaches in his position would have done: be a stubborn, old, crotchety coach. Rather than try to shove a square peg into a round hole by making Tim Tebow run a traditional NFL offense, Fox played to Tebow's strengths and integrated a read-option that allowed football Jesus to throw less and run more. Now Fox has the exact opposite situation to work with in Peyton Manning. We think he'll be fine.

Best Combination of Alcohol and Exercise

Hosted annually by the Denver Run Club, the Beer Mile requires participants to chug a beer and run a 400-meter lap — then repeat three times. Beer Miles are held all over the country, and Denver's most recent version was held on St. Patrick's Day, naturally. It's BYOB — and make sure you come with the strong stuff (at least 5 percent alcohol by volume), or don't come at all. All beers must be twelve ounces, as well. Oh, and if you throw up, you have to do a penalty lap.

Rather than donning Tim Tebow jerseys, the sports name Coloradans should have plastered all over their clothing in 2011 was that of Jennifer Barringer Simpson. In an unexpected victory, the 25-year-old University of Colorado at Boulder graduate (and 2008 Olympic athlete) took the gold medal for the 1,500-meter track event at the World Championships in Athletics in South Korea last year. Simpson sped past the rest of the racers in the final few moments to become the victor, making it the first time since 1983 that an American woman took home the title. 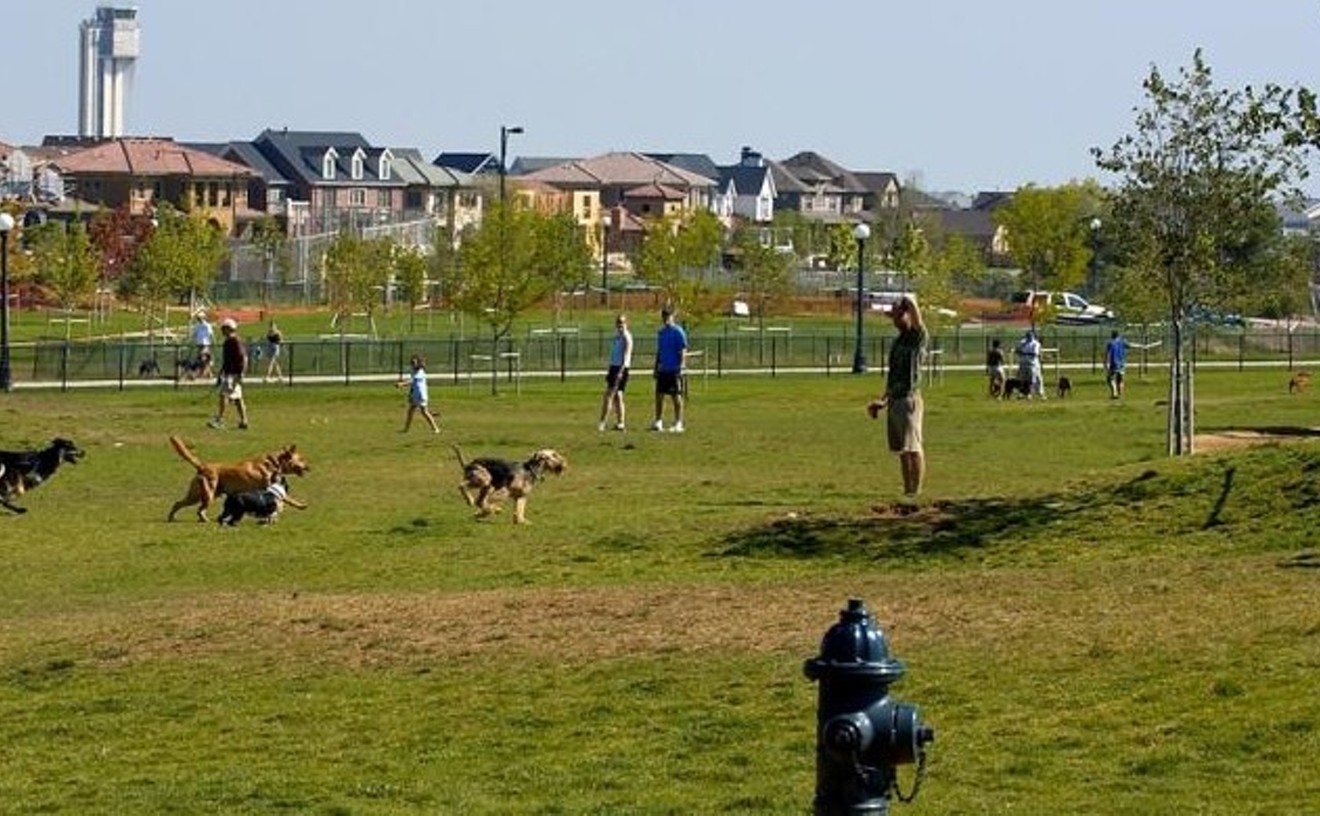 Here's the thing about dog parks: They're for dogs, and mostly medium-to-large dogs that need some exercise. So while you, the human, might like a spot with a lot of grass, shade, benches, pedicures and an espresso bar, your dog wants a huge expanse of land to burn off its energy. Stapleton fits that description better than any park in the city. It's massive and it's all sand. Rocky may have made running in sand look easy and super-awesome, but it will have your dog's tongue hanging in no time.

Community Yoga at the Mercury Cafe 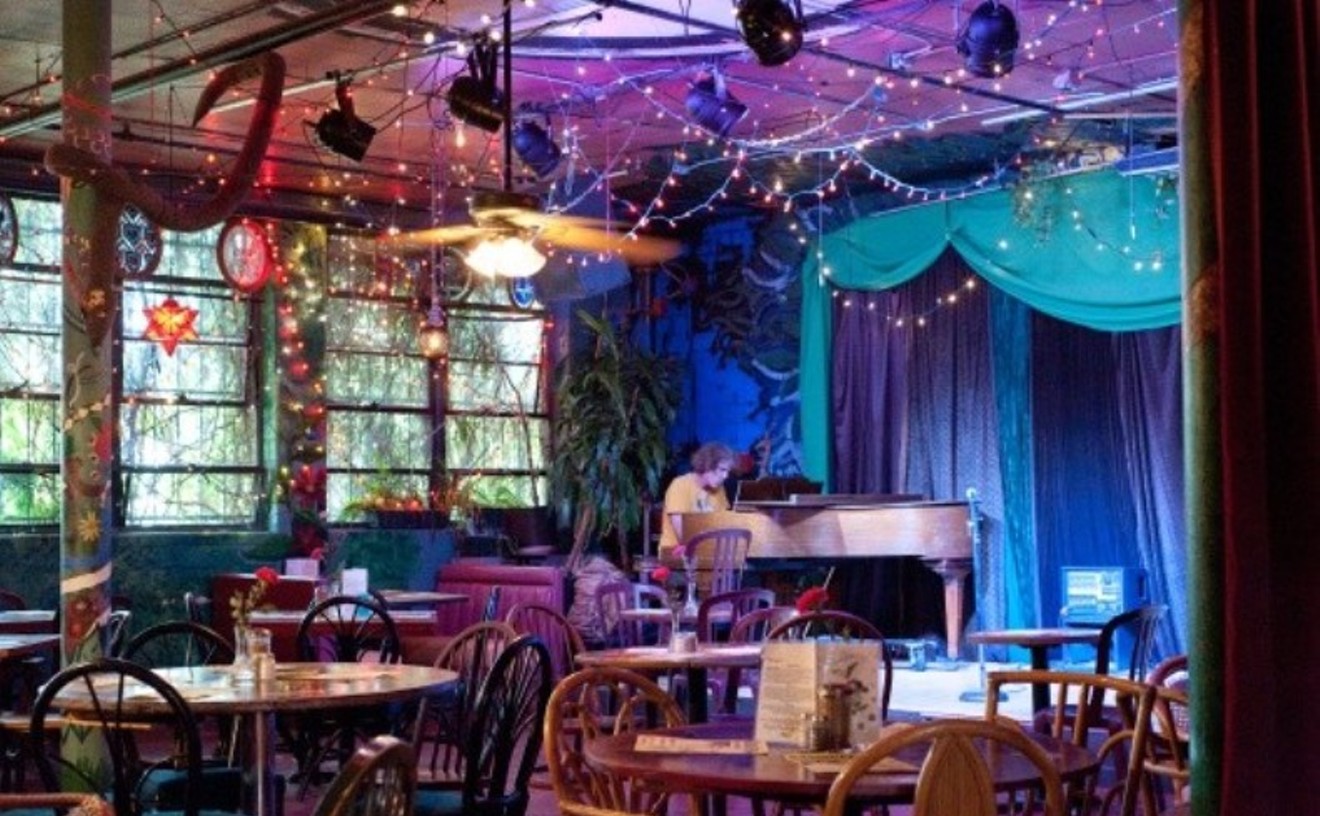 Every Saturday at 10:30 a.m. at the Mercury Cafe, Kendall Perry and Piper Rose teach Community Yoga, a class open to all ages and skill levels. The best part? It's free — for everyone. Whether you're a yogi with decades of experience, a first-timer, a senior citizen or a toddler, the instructors make sure the class is tailor-made to fit. The Merc's big wood floor and availability of natural light make for a comfortable, no-pressure environment, with plenty of room for stretching and bending. Every so often, Community Yoga transforms into "show-ga," with local musicians and performers joining in to create a live soundtrack. After class, students can continue their healthy trip downstairs for a nourishing brunch from the Merc's all-organic menu.

Stop the presses! Our crack team of researchers pegged the answer to this question at three, but that was before the Peyton Manning signing. Then we revised downward, briefly, to zero, before finally settling on four, thanks to Tim Tebow's trade to the New York Jets. Bright lights. Big City. Meet your new biggest star.