Donnie Darko Returns But Remains Out of Time

Courtesy of Arrow Films
Having now reached the age of its wayward protagonist, Donnie Darko is once again being tasked with forestalling the end of the world. Richard Kelly's sleeper first opened almost two years after screening at Sundance, and a month after 9/11, becoming an early example of a trend that scarcely exists these days: the movie that finds its audience on DVD. Now, courtesy of a 4K restoration and re-release, its unstuck-in-time quality has taken on a new, deeper significance.

For the uninitiated and/or forgetful, a reminder: Donnie Darko, a teen whose troubles are numbed but not nullified by an aggressive therapy-and-medication regimen, sleepwalks his way into a vision of an evil-looking rabbit telling him the world will end in exactly 28 days, six hours, 42 minutes and 12 seconds. And it does, in a way: Donnie Darko concludes with a death that, depending on one's philosophy of time travel, is either entirely preventable or utterly inevitable. (Or is it both?)

At the exact moment that Donnie receives this apocalyptic premonition, a jet engine falls out of the sky and crashes into his bedroom. Had he been asleep in bed rather than somnambulating, the 16-year-old would surely have been crushed to death — and nobody can seem to locate the plane. This inexplicable happening is at first played for ominous laughs but, like much of the film, comes to be more tragic than comic once Donnie has completed his time loop.

The allusive plot that grows out of that moment touches on not only time travel but also Graham Greene, self-help gurus and the 1988 election; “I'm voting for Dukakis,” the film's opening line, establishes the joyfully hopeless tone. None of these subjects is explored in much depth save the atemporal element, but taken together they create an elegant universe that's aged — and expanded — surprisingly well. That Donnie Darko occasionally plays like a crash course on its own to-be-continued lore is borne out by the director's cut, which is 20 minutes longer, more detailed and less ambiguous; it also substitutes one of the original’s best musical cues for an inferior selection. See it out of curiosity if you're so inclined, but know that the theatrical version is a case study in addition by subtraction (albeit an unintentional one). 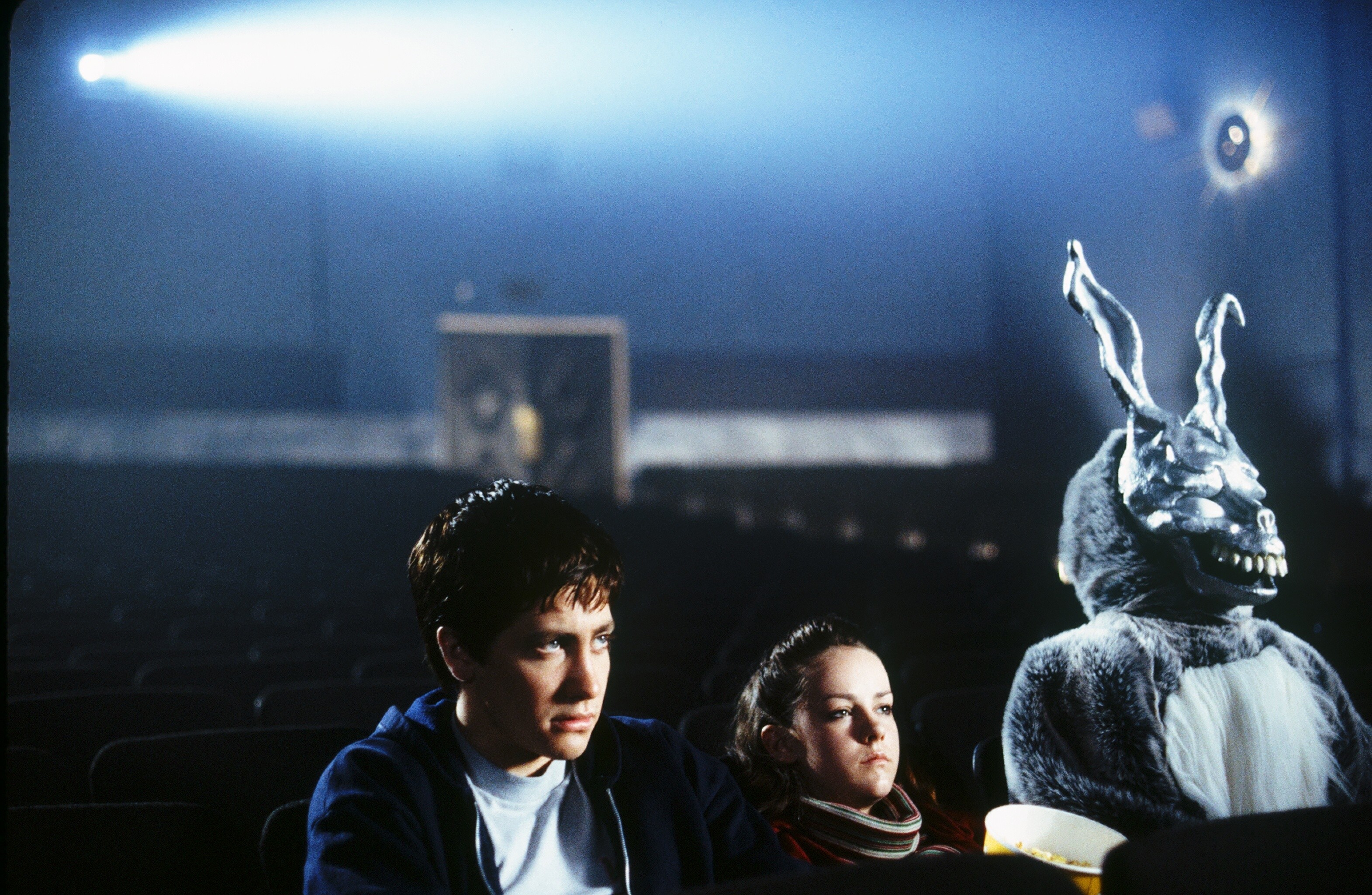 Courtesy of Arrow Films
A baby-faced Jake Gyllenhaal stars in the title role, of course, and like the film as a whole, his Donnie is both philosophically minded and ever so slightly out of his depth. Still, even if Donnie Darko doesn't feel as revelatory as it did at the time, its musings still resonate. That many of these are forever emblazoned in countless teenagers' notebooks — "destruction is a form of creation," "every living creature on Earth dies alone," "why are you wearing that stupid man suit?" — is nothing if not apropos of the material and our adolescent antihero. If you're a moviegoer of a certain age, Donnie Darko may very well have introduced you to the concept of a cult movie; catching up with it now is a little like attending your high-school reunion, only enjoyable.

In hypnotherapy sessions conducted by an aloof shrink, the film lays bare the troubled mind that births the alluringly strange visions that have become Donnie Darko's hallmark. Chief among them is Frank the Rabbit himself, the most arresting leporine character this side of Watership Down and Inland Empire; the creature from beyond remains as evocative as ever. It's evident from the outset that what Donnie's seeing and experiencing might not be real in the strictest sense of the word, but Kelly’s great success lies in how he encourages us to reconcile Donnie’s reality with ours — we want to see this strange journey carried through to its end, which happens to be its beginning.

Kelly's sense of suburban anomie feels as indebted to early Tim Burton as it does to American Beauty, but the writer/director manages to carve a space for himself among his influences. He's since gone on to direct two more features, neither nearly as well received as his debut; surprisingly, his post–Donnie Darko corpus has not entailed any music videos. That's a shame, as his debut contains three knockout montages that make evocative use of Echo and the Bunnymen's "The Killing Moon," Tears for Fears' "Head Over Heels" and Gary Jules' cover of "Mad World." Fifteen years later, it's these sequences that make the most convincing argument for Donnie Darko's status as not just a cult classic but a classic, period — even if some of Kelly's ambitious plotting falters under scrutiny, his gifts as an image-maker are undeniable.

In the end, Donnie Darko leaves us with the same dispiriting notion as Twin Peaks: Fire Walk With Me: That all the mystery and mythology in the world can go only so far in distracting from a central, irrevocable tragedy. If it's true that whoever saves a life saves the world entire, then the opposite holds as well.