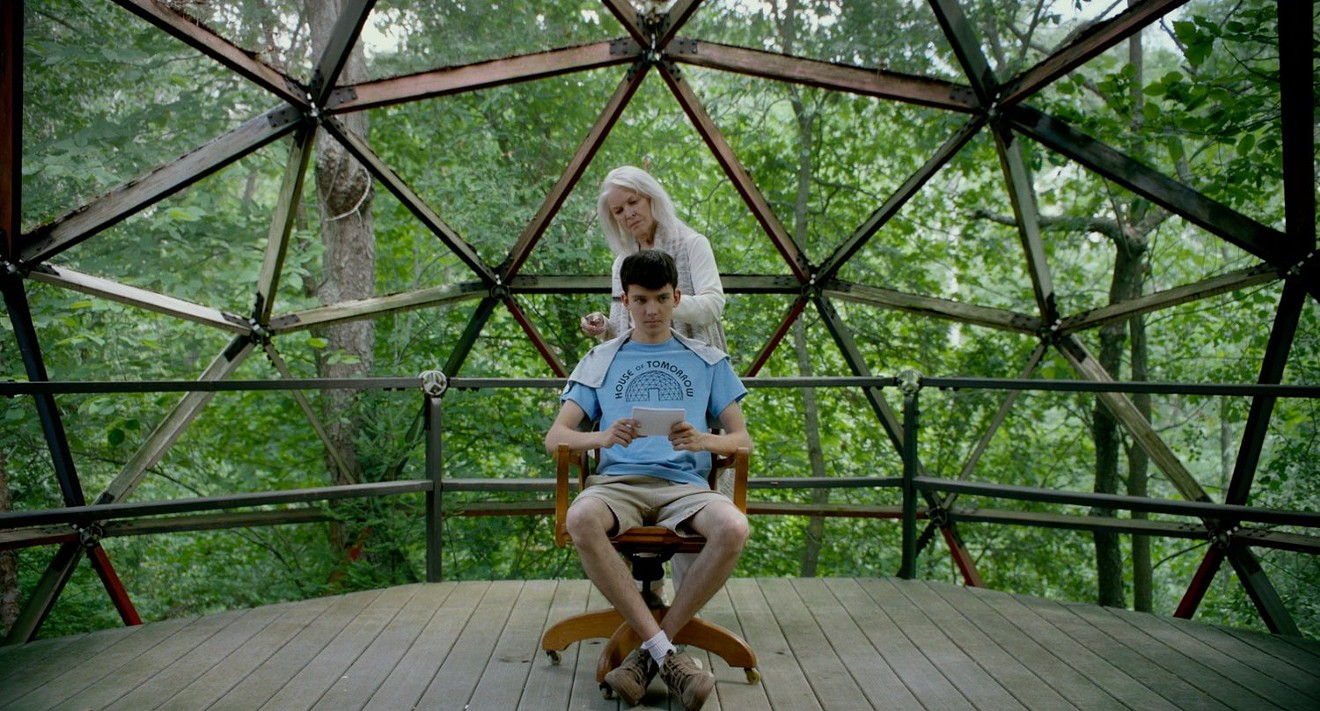 Asa Butterfield plays Sebastian Prendergast, a sheltered, home-schooled, health-conscious teenager who was orphaned as a child and lives with his grandmother (Ellen Burstyn) in The House of Tomorrow. Courtesy of Shout! Factory
In The House of Tomorrow, a teenager who lives a sheltered, home-schooled, health-conscious life with his grandmother inside a geodesic dome discovers the outside world — other teens, girls, punk rock and grilled cheese sandwiches. Yes, on the surface at least, this is that kind of movie: “quirky,” sensitive and cute, complete with pat life lessons and predictable challenges. Sebastian Prendergast (Asa Butterfield, compellingly wide-eyed and tense) is brilliant, but odd: He was orphaned as a child, and his grandmother caretaker (Ellen Burstyn) is a disciple of the legendary American inventor and architect Buckminster Fuller, whose precepts she instills in him. Sebastian’s only interactions with other kids, it seems, come via tours he gives of the dome in which he and Grandma live, educating school and church groups about Fuller’s legacy.

The unexpected arrives when Sebastian’s grandmother suffers a stroke, forcing him out into the unknown, or at least the home of a local church leader (Nick Offerman) and his kids — mouthy, green-haired rebel Jared (Alex Wolff) and his aloof older sister, Meredith (Maude Apatow). Sebastian and Jared bond in the way that standoffish teen boys tend to, by first pretending they don’t really like each other, then quickly becoming partners in crime. Jared can’t stand the pronouncements of his sanctimonious father and instead finds solace in punk rock. He’s also had a heart transplant and has learned to use his medical condition to manipulate his loved ones; they’re still waiting to see if his body will accept or reject his new ticker. Sebastian, for his part, plays it cool, but he’s clearly entranced by all this, and Butterfield excels at conveying the boy’s longing for newness and change with just the subtlest of glances. The prospect of rebellion clearly thrills Sebastian, so he goes along with Jared’s lightly rebellious punk-rock plans and pranks.

The introvert brought out of his shell; the ill best friend; the ill best friend’s standoffish sister, who becomes something of a love interest — The House of Tomorrow sticks to a time-tested coming-of-age template that’s as common in the indie world as the superhero origin story is in the studio world. But there’s good news, too: When it’s not busy hitting the usual notes, Peter Livolsi’s film manages to be a touching exploration of what “tomorrow” actually means. Buckminster Fuller’s ideas, designs and inventions were attempts not just to influence the shape of things to come, but to create the world in which he wished to live. And yet as the film presents it, his vision now feels like an outdated bit of mid-century optimism, as quaint and isolated as the geodesic dome in which Sebastian and his grandmother reside. (A nice touch: archival footage of Burstyn in her youth hanging out with the real “Bucky” Fuller, who was an actual friend of the actress.) Meanwhile, Jared exists with the knowledge that each day could be his last. During a particularly quarrelsome moment at home, he reminds both Meredith and his dad that he’s going to die first, effectively dropping the mic on their argument.

Fuller spent his time imagining the future; Jared doesn’t have that luxury. But these kids do find a kind of optimism and belonging in punk. And the music even prompts some forward-looking resourcefulness on their parts — be it their plan to cause a distraction at church in order to steal a guitar or their elaborate organization of an illegal concert at the dome, complete with a variety of ruses to keep the adults from finding out. They use their ingenuity not to squint toward a distant reality, but to get through the next day and the next. Inspiration and invention, it seems, come not from clean, cold, scientific calculation, but from deep emotional need.