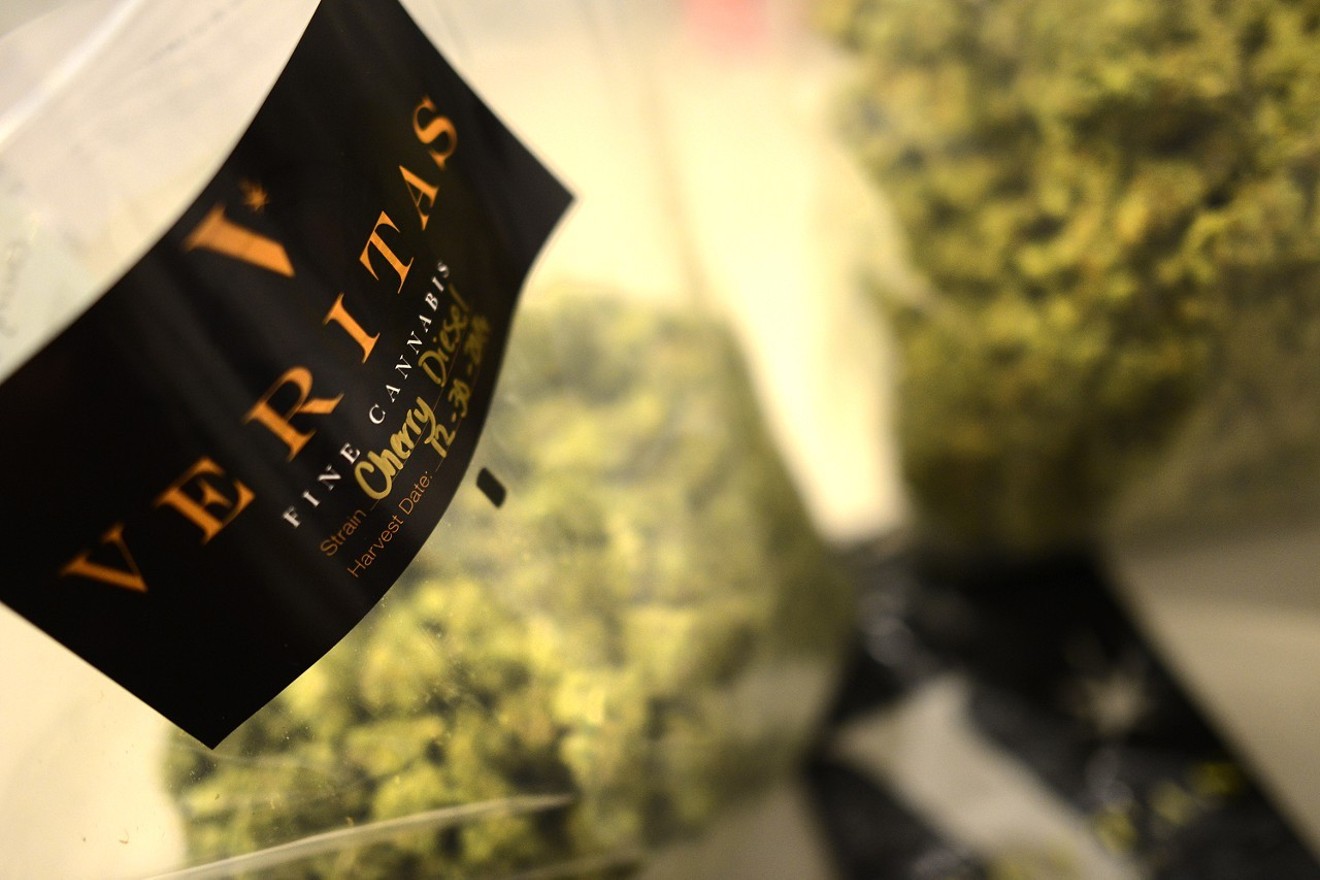 A recall for Veritas Fine Cannabis was issued over mold and yeast concerns on Friday, January 8. Scott Lentz

The Colorado Marijuana Enforcement Division has issued a recall in regard to marijuana growing brand Veritas Fine Cannabis, citing mold and yeast concerns.

The recall, issued January 8 in conjunction with the state Department of Public Health and Environment, applies to two harvest batches and includes concentrated products extracted from the strains, according to the MED. The recalled strains, Grape Oz and Biker Oz, should bear one of the following tracking numbers on their packaging: 3H345-GRZ or 4H346-BKZ.

The MED urges anyone who's purchased the recalled marijuana to dispose of it, but since most of the affected products were sold in November, it's likely that many of them have already been consumed.

"They're getting it out of a store safe room [to test]," says Veritas co-owner Mike Leibowitz. "There's very little, if any, of this left on the shelf."
Although marijuana batches undergo microbial testing after harvest, the retail products they're used to make can be subject to testing weeks or months later — and random retail pot tests by the MED and the City of Denver have shown that mold and yeast can grow on marijuana while it's sitting on the shelf if no precautionary measures are taken.

Leibowitz says that this was a singular "shelf-storage issue," with the microbial growth occurring on the flower after harvest and inside the dispensary packaging. Both of the recalled strains are known for producing large, dense buds, he notes, which are more susceptible to moisture and ensuing mold after sitting on the shelf.

According to Leibowitz, Veritas voluntarily destroyed the Biker Oz products, and the company is looking into new forms of packaging to ensure that microbial growth doesn't occur again. The Veritas grow "has been deemed clean" by the CDPHE, he adds.

Veritas is currently responsible for growing Cookies brand cannabis, as well. The MED recall only lists Veritas, however, and Leibowitz says that Cookies products remain unaffected.
KEEP WESTWORD FREE... Since we started Westword, it has been defined as the free, independent voice of Denver, and we'd like to keep it that way. With local media under siege, it's more important than ever for us to rally support behind funding our local journalism. You can help by participating in our "I Support" program, allowing us to keep offering readers access to our incisive coverage of local news, food and culture with no paywalls.
Make a one-time donation today for as little as $1.