Jacqueline Collins
Just under 15 percent of commercial marijuana flower, trim and shake batches tested for microbials failed last year, according to an annual report from the Colorado Marijuana Enforcement Division.

A growing problem for legal weed over the past several years, marijuana containing mold and yeast has supplanted banned pesticides — which were found on under 2 percent of tested marijuana in 2019 — as a dispensary shopper's main cause for concern. After a microbial failure rate of about 10 percent in 2017, that figure jumped to about 15 percent for Colorado cannabis in 2018, and decreased just slightly last year.

If a marijuana sample fails contaminant testing, the entire batch is put under quarantine, after which it is either retested (which can lead to more failures, the MED notes), remediated for extraction or destroyed. However, preliminary results of an assessment of inventories at Denver dispensaries by the Department of Public Health and Environment show that mold and yeast can still appear on marijuana plant matter after a successful test.

Marijuana concentrates tested at a much safer rate, with over 98 percent of samples passing microbial testing and almost 95 percent passing residual solvent testing in 2019. 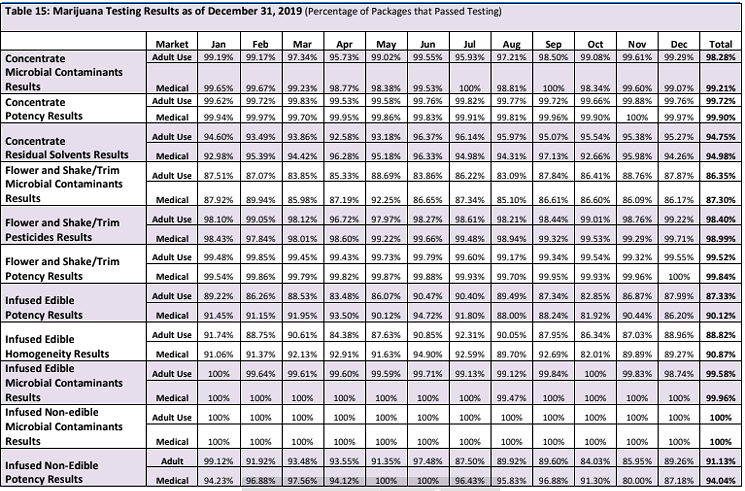 Colorado Marijuana Enforcement Division
The microbial results were part of a larger report released May 1 spanning most major aspects of commercial marijuana in Colorado, including statewide licensee, cultivation, sales and testing statistics. Moldy weed wasn't the only interesting factoid in there, either.

For example, there were over 1,000 active marijuana growing licenses in Colorado in 2019. Those enterprises harvested over 3.1 million plants during the year, which eventually turned into nearly 1.4 million pounds of usable weed, according to the MED. Denver was responsible for the bulk share, pumping out around half of the state's pot last year.

Update: This post was update to reflect contextual information about the MED's retesting process for microbials, which can result in multiple tests on the same batch of marijuana.
KEEP WESTWORD FREE... Since we started Westword, it has been defined as the free, independent voice of Denver, and we'd like to keep it that way. With local media under siege, it's more important than ever for us to rally support behind funding our local journalism. You can help by participating in our "I Support" program, allowing us to keep offering readers access to our incisive coverage of local news, food and culture with no paywalls.
Make a one-time donation today for as little as $1.