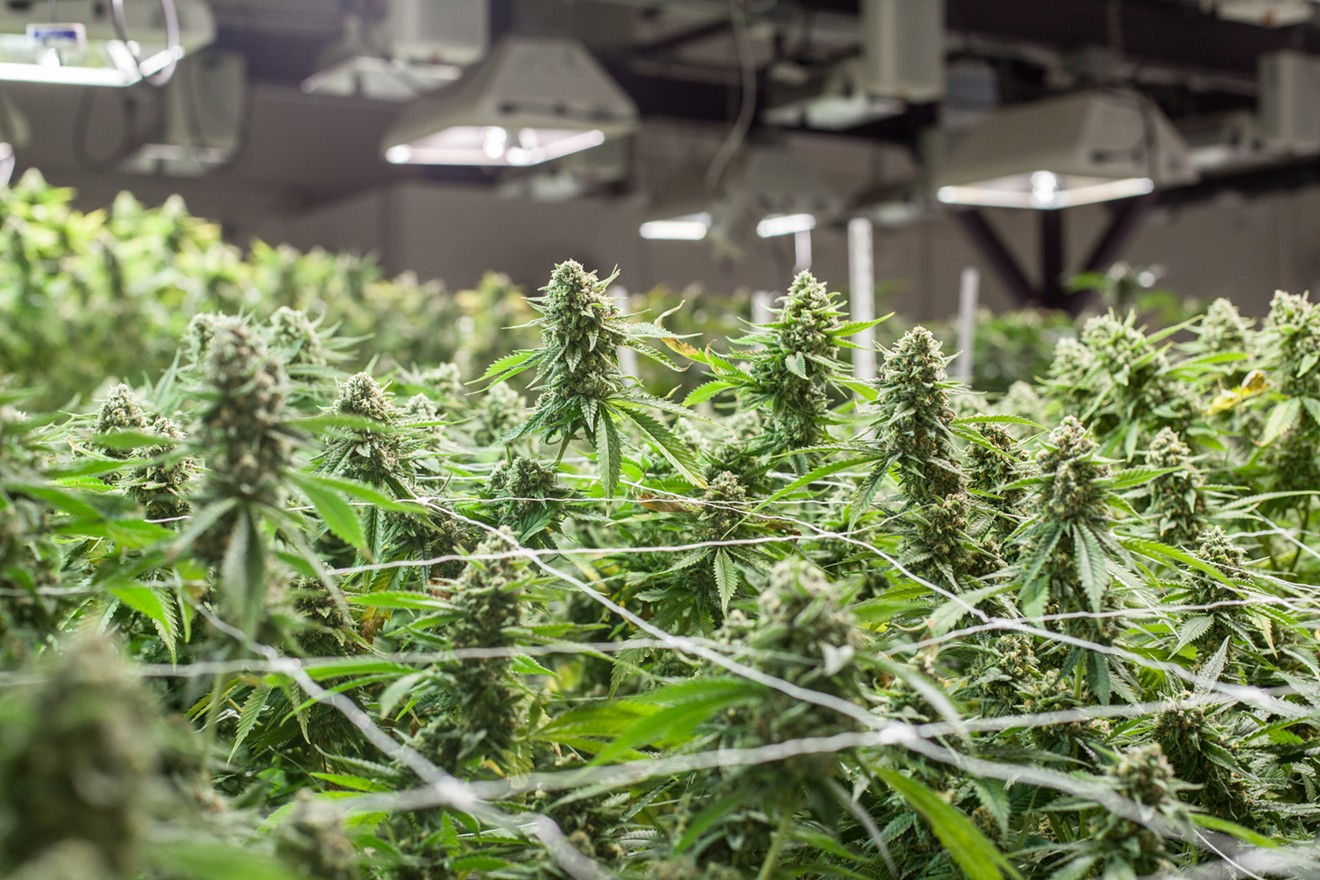 Medical marijuana sales have experienced their lowest recorded monthly totals five times so far in 2022, and the price per pound of all commercial marijuana reached a record low last month, according to the Colorado Department of Revenue. The drop in prices has led to a steady decline in recreational sales for over a year, DOR data shows, with inflation and reduced marijuana tourism both cited as contributing factors by marijuana business owners.

However, the biggest contributor to tanking weed prices is an oversupply of product, according to a coalition of thirty Colorado marijuana growers and dispensary ownership groups.

"For the first time since legalization was implemented, marijuana sales and the revenue generated from marijuana taxes will be substantially lower than the previous calendar year," reads a September 15 memo to the state from the coalition. "The problem is further exacerbated by the country’s broader economic situation, with record-high inflation driving down sales of consumer goods. Despite a decrease in demand, the supply of marijuana continues to increase, with new licenses being issued and additional cultivation capacity being authorized to current licensees."

There are 798 active recreational marijuana growing licenses in Colorado, according to the MED, up from 716 at the beginning of 2021. During that same span, the average price per pound of marijuana flower has fallen nearly 62 percent, while annual dispensary sales are currently on pace to come up about 20 percent short of the $2.2 billion sold in 2021. As prices and sales continue falling, dispensaries and growers have had to lay off staff; some have shut down altogether.

Colorado's marijuana regulations enable a tier system for growers, with cultivations allowed to grow a certain number of plants based on the amount of marijuana they sell the previous year. According to Stan Zislis, co-owner of dispensary chain Silver Stem Fine Cannabis, this tier system set up the wholesale market for an inevitable retraction.

Silver Stem and 29 other marijuana producers, extractors and retailers sent a request to the MED proposing a moratorium on marijuana cultivation licenses for two years, according to a MED memo. The moratorium would make an exception for social equity licensees and allow licensed medical growing operations to apply for recreational growing permits. If current growing operations want to grow more plants than their production tiers allow, the coalition would like growers to provide "proof" such as vendor contracts, promise of sale notes or projected inventory data,

"Local jurisdictions such as Denver have already enacted a moratorium on new licenses for non-social equity applicants. A moratorium at the state level would complement those efforts. By stabilizing the supply chain, the state would be able to further pathways of success for small- and medium-sized marijuana companies," the coalition's memo reads.

In a separate memo sent September 13, the coalition also asked the MED to implement a holiday on the state's 15 percent excise tax currently placed on wholesale marijuana.

"As the marijuana market and the country’s overall economic outlook fluctuate, Colorado licensees cannot be expected to continue paying a tax that is widely viewed as fundamentally unfair. We are, therefore, proposing a tax holiday from the retail marijuana excise tax for all retail marijuana cultivation businesses until the issues outlined above are resolved," the memo to the MED reads. "Suspension of the retail excise tax will allow state and industry stakeholders to collaborate on next steps without continuing to levy an unfair and impractical tax against struggling businesses."

During the September 30 MED hearing, executive director Dominique Mendiola was skeptical that the MED had the authority to implement a licensing moratorium or tax holiday on marijuana, and suggested that marijuana business owners pursue those efforts through the Colorado Legislature.

Marijuana attorney Brian Vicente co-wrote Colorado's recreational marijuana legalization legislation in 2012 before expanding his law firm, Vicente Sederberg, into one of the largest marijuana-specific law firms in the country. Nearly ten years after recreational pot laws were implemented in Colorado, Vicente says he believes it's time that marijuana business owners and state regulators have a "robust discussion" about a licensing moratorium or cap on marijuana growing operations, but adds that there are "certainly two sides" to the discussion.

"There's definitely an SOS out on growers in Colorado," he says. "Many of them have been doing this for a decade and are used to a certain level of wholesale prices, so this is affecting everyone's bottom lime. I'm not sure if a moratorium is the most embraced option, but we've heard an SOS for all growers, and we need to consider all options."

Vicente argues against an excise tax holiday, however, given the revenue the tax collects for the state. Through the first eight months of 2022, Colorado marijuana excise tax brought in nearly $6.6 million a month on average, according to tax data from the DOR.

"I'd hate to see that line of revenue go away, so I think any sort of tax holiday or abatement would have to be talked about at length. The question is: Is it worth the tradeoff?" Vicente notes. "Are we willing to give up providing this legitimizing tax revenue to the state for business owners and consumers to save a couple bucks?"

Vicente expects both topics to continue playing out during industry discussions, and will likely be on the radar of state lawmakers in 2023. In the meantime, however, he believes that Colorado's state government should do more to empower marijuana growers during their first sustained down period.

"Governor Polis could do more to lobby on this issue, and he could do more to support Colorado [marijuana] farmers by really codifying the issue of whether federal legalization shifts, farmers can export this crop to other states," he says. "I think it's inevitable that we're going to have federal legalization. We've shown, in a very powerful way, that cannabis is an excellent crop for Colorado. In some ways, we're growing too much of it. If we can export Colorado cannabis to other states, it seems like a great move."
KEEP WESTWORD FREE... Since we started Westword, it has been defined as the free, independent voice of Denver, and we'd like to keep it that way. With local media under siege, it's more important than ever for us to rally support behind funding our local journalism. You can help by participating in our "I Support" program, allowing us to keep offering readers access to our incisive coverage of local news, food and culture with no paywalls.
Make a one-time donation today for as little as $1.