The recall came after a Denver Department of Environmental Health investigation found residual levels of myclobutanil, a chemical banned for marijuana growing by the Colorado Department of Agriculture, in Buddies product samples. As a result, the DEH requested that any medical marijuana concentrate from the medical-only dispensary with the Optional Premises Cultivation (OPC) code 403-00364 purchased prior to July 21 be disposed of or returned to the store.

"There have been no reports of illness," the DEH recall notice reads. "The possible health impact of consuming marijuana products with unapproved pesticide residues is unknown. Short- and long-term health impacts may exist depending on the specific product, duration, frequency, level of exposure and route of exposure. Consumers with concerns about their personal health should contact their physician with related questions." 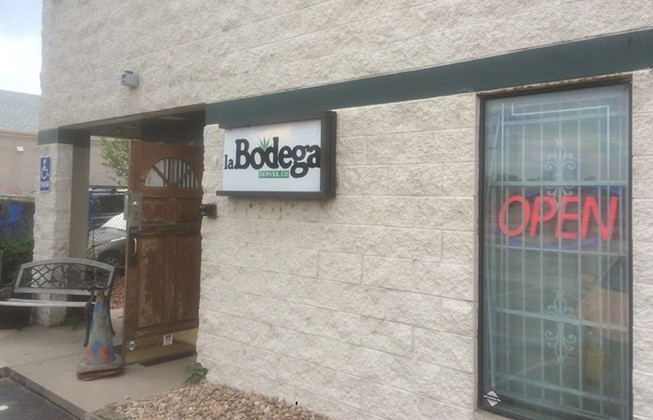 La Bodega dispensary is located in the Valverde neighborhood.
Thomas Mitchell
Myclobutanil is used to fight powdery mildew in marijuana and is commonly found in Eagle 20, a fungicide applied to grapes and other agricultural products. The Food and Drug Administration tests its chemical residue at parts per million, however, while Denver marijuana concentrates are tested at parts per billion, creating a much stricter threshold.

Buddies Wellness owner Gabriel Sandoval says the recall stemmed from residue left over from a pesticide application that happened years ago. "It was a minor trace. We were kind of confused, because we didn't know where it came from. It had been years since it was last used," he says. "It really caught us off guard."

The cultivation area that tested positive has been power-washed and removed of dust particles, and the DEH was pleased with those actions, he says, adding that the grow's flower was deemed safe to smoke after a second test.

But DEH documents and cannabis lab reports released by the city after a CORA request show that this was more than just an isolated incident, though Sandoval disputes some of the assertions made in those documents. Cannabis trim from Buddies Wellness was sent to concentrate maker Focused Labs, which had it tested by an independent lab for contaminants after it was made into concentrate, DEH documents say; Focused Labs sent the concentrates back to Buddies because they tested positive for banned chemicals myclobutanil and spiromesifen. But then Buddies ordered that the concentrates be turned into distillate, in hopes of ridding them of chemicals, according to the DEH:


Sandoval says his products were never tested for pesticides by Focused Labs, and that the first time he was aware of products from his grow testing positive for pesticides was after his cultivation area and the plants and flower inside of it were tested. He made a mistake referencing the distillate to DEH investigators, he explains, and says none of the sold distillate had pesticides in it.

Luminescence Labs Inc. rejected the shake/trim and sent it back to Buddies Wellness LLC per manifest 01300773 on 03/28/2017. Buddies Wellness LLC then proceeded to send the rejected shake/trim to Cold Baked LLC per manifest 01306029 on 03/30/2017 for processing into concentrates (also verbally confirmed by operators). Operators think it is possible that the shake/trim was rejected by Luminescence Labs due to pesticide screening.

Despite DEH documents that report Sandoval verbally confirmed Luminescence rejecting the trim because of pesticide issues, he also disputes these claims, saying that his company could never come to an agreement with Luminescence Labs on pricing, and ultimately decided to not go through with extracting the trim.

Despite all the confusion and conflicting claims, the DEH says that Buddies was cooperative throughout the investigation. For his part, Sandoval says no one at the grow had realized that dust particles could hang around that long.

"At the end of the day," he says, "it was a learning experience for us that caught us by surprise. But we're glad it happened."