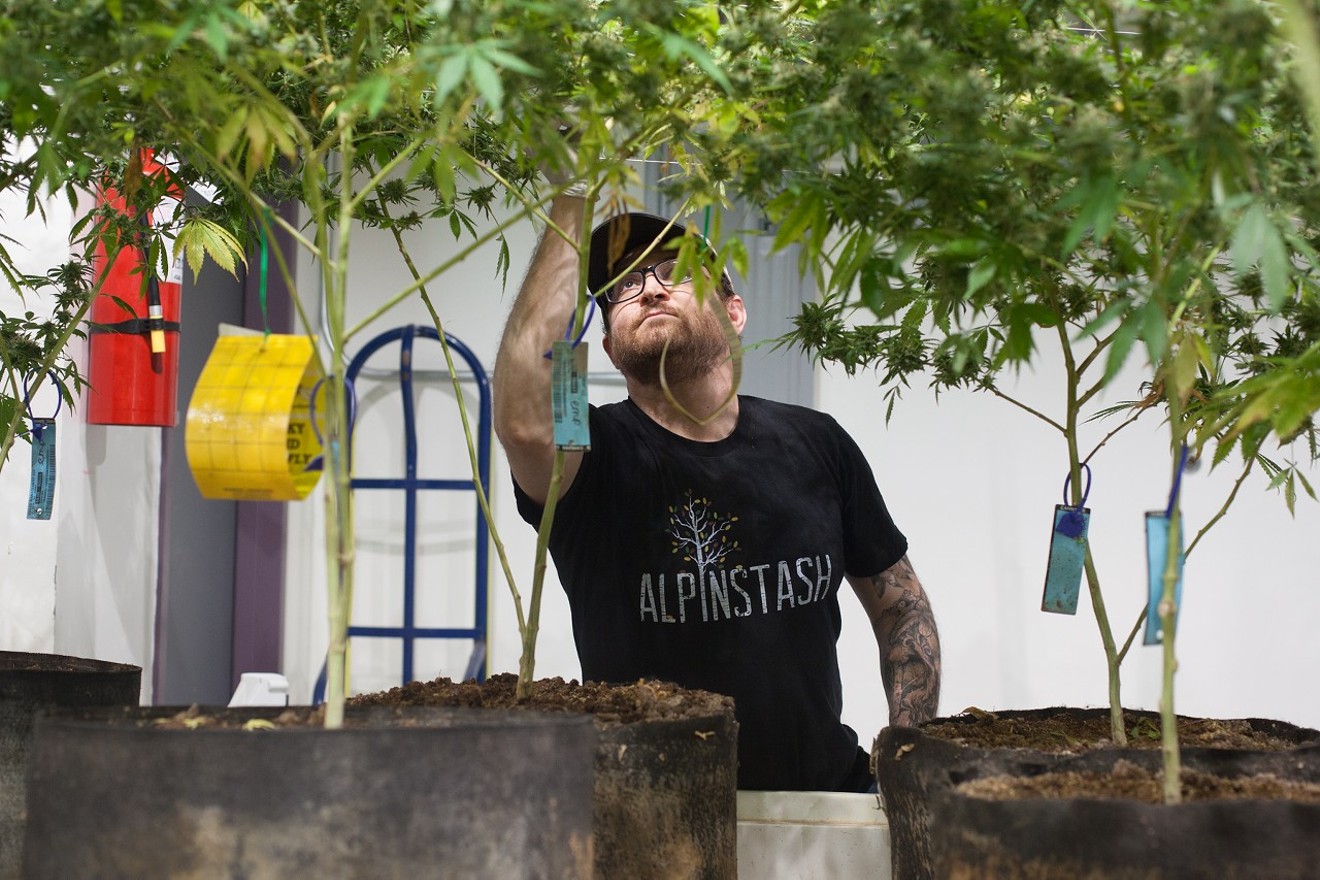 AlpinStash cannabis cultivator Danny Murr-Sloat tends to his plants. Jacqueline Collins
A new working group whose membership comprises marijuana industry and community stakeholders will have the City of Denver's ear on pot licensing issues such as weed delivery and hospitality businesses.

In an April 27 memo sent to marijuana business owners in Denver, the Denver Department of Excise and Licenses described the Marijuana Licensing Work Group, a 24-person advisory board that will "review, discuss and make recommendations on policy direction and possible marijuana licensing laws, rules and regulation," according to the announcement.

The MLWG will review licensing opportunities granted by two new laws allowing pot delivery and social consumption businesses in Colorado. Both laws require local approval before such services are allowed within a municipality's borders, and the working group has been a planned step in Denver's exploration of the new opportunities.

A Denver ordinance legalized social-use businesses at the local level in 2017, but the city's social-use regulations — with only one business currently open under their purview — are more restrictive than the state's rules, which have more relaxed location requirements and include provisions allowing micro-sales at consumption areas and indoor smoking; neither of those are allowed under the city's current rules.

According to Excise and Licenses, the MLWG was created to address social equity in Denver, a city with only a handful of new cultivation and dispensary location opportunities. However, delivery and hospitality could present a chance to diversify the pot industry in a state where 88 percent of marijuana business owners were white in 2018, according to the Colorado Marijuana Enforcement Division.

While there is an agreement between regulators, industry and activists that social-equity efforts should help people from communities impacted by the War on Drugs, the process of defining that for a government program has proved more difficult. An informal working group was created to advise the city on social-equity efforts in the marijuana industry in 2019, but it was dragged down by internal arguments over the definition of a social-equity applicant, and whether race played a part in that definition. The disagreements between city officials and several marijuana industry members got so ugly that an independent mediator was brought in to defuse the situation, and  the informal working group was soon disbanded.

The MLWG is now charged with making formal recommendations to Mayor Michael Hancock's administration and to Excise and Licenses' Office of Marijuana Policy, as Denver officials consider whether/ how to implement delivery and social use and explore other marijuana licensing issues. The group includes several Denver City Council members and city administrators, along with pot-industry representatives, lobbyists and members of health, education and children's safety coalitions.

Virtual meetings are currently scheduled to take place May 14, May 28, June 11 and June 25 on Zoom to avoid human interaction during the COVID-19 pandemic; those online meetings are open to the public.

In the meantime, here are the members of the MLWG: