Silver Stem Fine Cannabis, a Colorado-based company with seven stores in the state, is attempting to open a new spot at 2331 East Ohio Avenue, right around the corner from the ice cream shop at 799 South University Boulevard. According to the Denver Department of Excise and Licenses, Silver Stem is attempting to transfer an existing medical marijuana license from 2243 Federal Boulevard, which isn't attached to a store currently, to Bonnie Brae and also get a new license for recreational sales.

The store would neighbor the historic ice cream parlor, which has inspired local opposition over fears of exposing children to marijuana while they're going for ice cream.

Despite neighborhood concerns and a last-minute push to block the dispensary, Silver Stem has received support from nearby residents and business owners, including next-door Brindle and Oak Wedding and Events, and Bonnie Brae Liquor, which is around the corner, and Bonnie Brae Ice Cream itself.

A hearing officer hired by the city recommended on July 7 that Silver Stem be approved to operate at the East Ohio address, but Excise and Licenses communications director Eric Escudero notes that the department is still in a ten-day window for accepting objections to the hearing officer's recommendation. According to Escudero, the opposition has been active as Excise and Licenses director Molly Duplechian mulls over her decision. 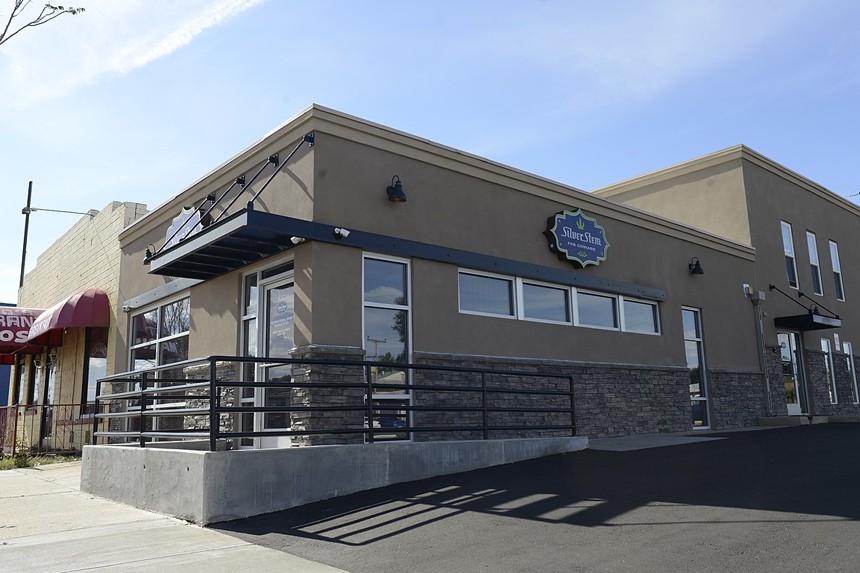 Silver Stem Fine Cannabis currently has seven stores across Colorado, with most of them located in the Denver area.
Scott Lentz
"We have already received a large volume of objections," he notes. "After receiving all the objections, Duplechian will review the recommended decision, evidence and testimony from the hearing, as well as objections to the recommended decision, then issue a final licensing decision."

Silver Stem co-owner and founding partner Stan Zislis didn't respond to a request for comment, but in his testimony to the city hearing officer he said that Silver Stem had a petition with 350 local signatures in support of the new store. According to Zislis, his staff reached out to registered neighborhood organizations, posted public notices on the premises, contacted the district's Denver City Council representative, Paul Kashmann, and hired a canvassing company to knock on 2,000 doors with invitations to a virtual town hall where the dispensary was discussed.

"Four people attended the virtual town hall," Zislis told the hearing officer. He also pointed out that the dispensary's location "is actually two doors away from the ice cream shop" and that there is "no common wall between the businesses."

If approved by the city, Zislis has said he hopes to open the store by November of this year.

In 2018, a different dispensary group attempted to open a pot shop at 747 South University Boulevard, about 400 feet down the street from Bonnie Brae Ice Cream. A city hearing officer also recommended the approval of that license, but the application was withdrawn before Excise and Licenses made a decision.
KEEP WESTWORD FREE... Since we started Westword, it has been defined as the free, independent voice of Denver, and we'd like to keep it that way. With local media under siege, it's more important than ever for us to rally support behind funding our local journalism. You can help by participating in our "I Support" program, allowing us to keep offering readers access to our incisive coverage of local news, food and culture with no paywalls.
Make a one-time donation today for as little as $1.