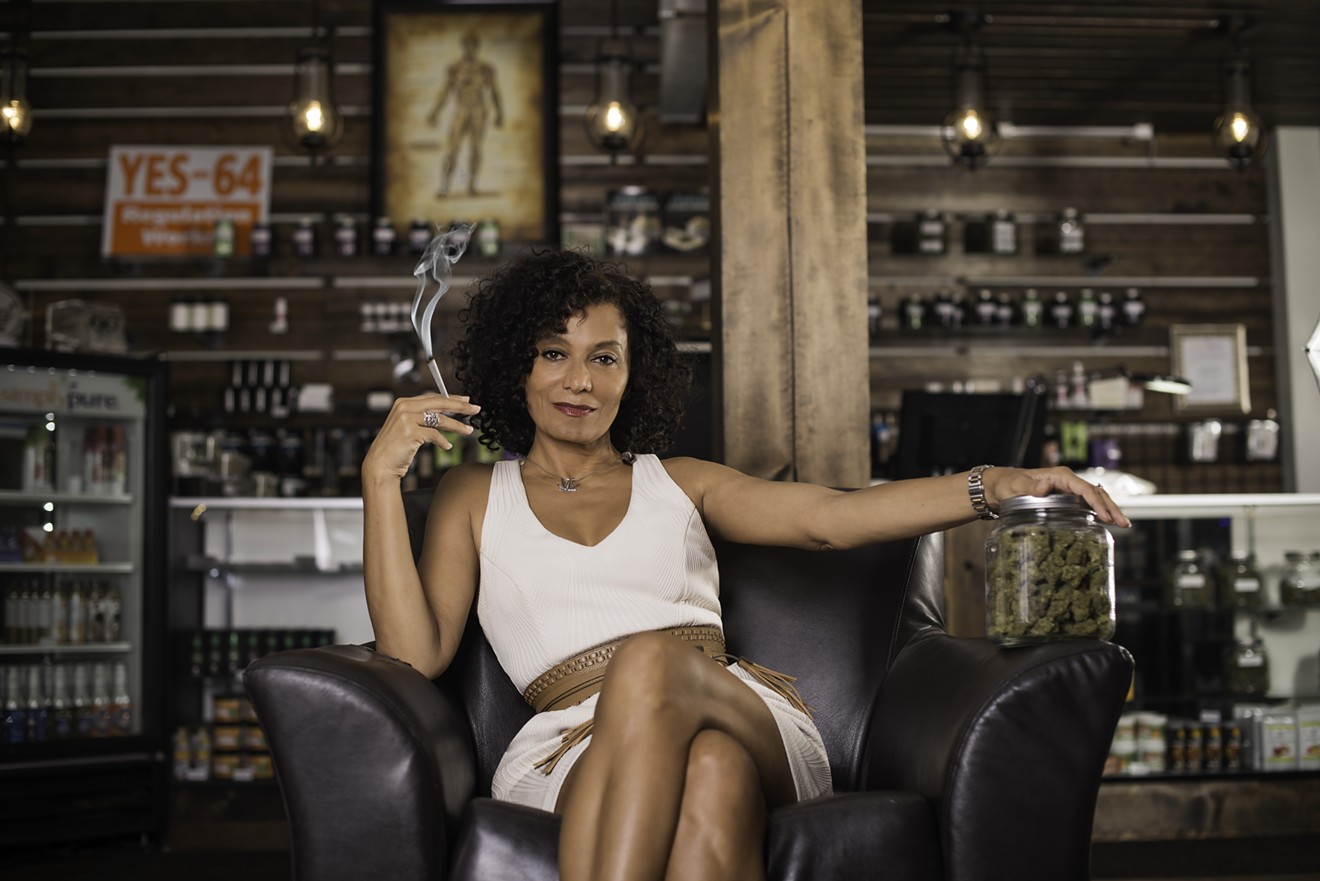 Wanda James has owned several cannabis businesses over the past decade. Courtesy of Wanda James
For legal cannabis to spread across the country, people need to speak up in more ways than with Facebook comments and on Gallup polls. Lucky for cannabis users, Wanda James can be loud enough for all of us. The pot entrepreneur and activist was the first black woman to open a dispensary in Colorado, and was honored with a lifetime achievement award at the 2017 Cannabis Business Awards for her role in the commercial rise of the plant.

But even with all her success in pushing cannabis forward, James still has an ax to grind with state regulators and corporate interests. She's frequently at government hearings speaking up for consumers' rights, social consumption and fair pot policy, and is a regular presence at public demonstrations criticizing law enforcement or elected officials for anti-cannabis actions. Westword recently caught up with James to see what she's been up to.
Westword: You've been a vocal opponent of past city measures that concentrated cannabis businesses in traditionally lower-income neighborhoods like Elyria Swansea and Globeville. What can we do to reverse that trend?

Wanda James: First and foremost, we must lay the issue at the feet of the City of Denver, which zoned dispensaries and grows to be in low-income neighborhoods in 2009 through 2012. Since then, many neighborhoods, including my own (lower Highland), have accepted dispensaries. Now we're seeing grows in numerous Denver areas because zoning has allowed for it. Sadly, the city is creating the same issue all over again by only allowing social consumption applications in lower-income neighborhoods. Frankly, it's becoming tiresome having the city create issues and then blame the cannabis industry for issues City Council created.

These issues could be easily fixed if Denver City Council and the Mayor’s Office (and the Governor’s Office) began to act as positively about the cannabis industry as they do about craft beer and alcohol. It is time accept the fact that Denver and Colorado will forever be known for cannabis, and the first state to do more than $1 billion in legal sales while creating more than 40,000 jobs. We are now and forever the Napa Valley of cannabis. We could avoid so many issues if the elected officials did what the people voted for in the landmark election. Amendment 64 was clear: “Regulate Cannabis like Alcohol.” Really simple.

How would you grade Colorado's cannabis landscape in terms of social equity?

The fact that for over five years we (Simply Pure) were the only black licensees and that the state refuses to release the ethnic background of the ownership of cannabis businesses says something about the failure of the state to address social equity. Colorado ruled that you could not have a drug felony and be a licensee. This prevented “cannabis visionaries” from participating in the first round of medical marijuana dispensary licenses. In Denver, before legalization, over 33 percent of arrests for simple possession were [of] black[s]. This fact alone prevented cannabis visionaries who happen to be black from being licensed owners. Once again, clearly targeting people of color. Since then, the cost of licenses, regulatory and compliance rules, and price-gouging of leases for cannabis businesses have made ownership for anyone not a multi-millionaire nearly impossible.

Colorado has tied the hands of every owner who is not wealthy to expand, and has become known as the most difficult state to bring in new investment dollars. The laws are restrictive for anyone who is not a Colorado resident to invest in cannabis businesses — which, once again, limits those who could benefit from investors in other states. You can imagine the difficulty of a black-owned company trying to find investment dollars in a state that has only five million people, and only 3 percent are black. Our prospects for growth are severely limited. I don’t understand why an American can’t invest in an American business.

To add insult to injury, Governor Hickenlooper recently vetoed a bill that would allow Colorado cannabis businesses the ability to partner with international public firms...once again making it difficult for POC and women-owned companies. His disdain for the industry has now allowed operators in other states to grow faster than those that fought to legalize first. It makes me shake my head and look forward to the day Jared Polis becomes governor. He said he would have signed the bill, which would have created more jobs and more interest in the Colorado cannabis industry.

Add in the moratorium on dispensaries in Denver, and that seals the deal in limiting new POC dispensary owners. Buying an already-established cannabis business will most likely start at no less than $1 million. Once again, you can thank the city for limiting the opportunity for POC to participate. So in terms of social equity, Colorado has done everything possible to ensure limited POC participation and ensure the industry is handmade for rich, white males. Is that by design or by mistake? In my opinion, the system is never broken — you just have to ask who it was designed to serve. How does Colorado rank in comparison with other states' social equity in cannabis?

As of today, Colorado does not have a social equity program. Colorado cannot or will not tell you how many black- or Latino- or women-owned cannabis businesses are licensed in the state. They can tell you how many construction companies are owned by blacks, Latinos and women, but not cannabis companies. In comparison, Massachusetts, California and many of the states legalizing in the upcoming elections have included language that allows for social equity, no penalty for having a drug felony, and even the possibility of a business loan program.

Clearly, racism is at the forefront of this issue. It was perfectly fine to target black and brown people to go to jail over cannabis and work in privatized prisons making money for corporations, but we were systematically left out of the process to be owners. That is why the state or local municipalities will not release the demographics of the owners. If you ask me, Colorado should be ashamed of that move.

Larger, more traditional corporations and investment firms are entering the cannabis arena at an increasing rate. How can states legalizing cannabis ensure fair competition and equal opportunity as they set up licensing, regulations, etcetera? It begins with a fair and equitable way to choose the new licensees. Demanding that applicants show $500,000 to $4 million dollars in accounts before they can apply will lead to mostly white male applicants. Making the process overly difficult will also limit the number of minority applicants. The current application process is so burdensome that you must hire professionals to write your application. That could cost up to $75,000.

The state should give priority to teams that have a strong local management and ownership team, give priority to teams that have 51 percent minority ownership and allow for different tiers of licensing. Allowing for a percentage of all licenses to go to minority-owned business is a good start. If we could be targeted to go jail for possession, we should be targeted for ownership.

Should we be happy with our rights as cannabis consumers in Colorado?

No! Why can you go the Argonaut Wine & Liquor and buy any amount of alcohol you desire, yet you are limited on how much cannabis you can purchase? Discussing the harm and death caused by alcohol and the zero overdoses of cannabis is futile when speaking to legislators. In 2017, 608 people died on our highways due to drunk driving, yet you can buy as much alcohol as you can afford if you are over 21. One day soon, I look forward to the cannabis industry being able to purchase (I mean inform...wink) as many lawmakers as the beer and alcohol industry.

I would also have to wonder why you can have alcohol in a bar, yet you can only consume cannabis, including edibles and vaping, in your home or at a private event? And why does the Denver Botanic Gardens allow any form of liquor, but not allow vaping at an outdoor concert? The reefer madness needs to stop.

How can someone reading this get involved in cannabis advocacy?

Call your elected officials. Vote for those who support ending cannabis prohibition. Get involved in local politics and lobbying efforts. I get so tired of hearing elected officials tell me that they get more calls concerned about the growth of cannabis than they do in support of cannabis. We have had over 200,000 patients in this state, and at least one person that loves them. I implore you all to call the mayor, every councilman, every House rep, your Congress member and U.S. senator. Tell them you support this industry. Tell them you enjoy your local dispensary. Tell them to regulate cannabis like alcohol. Tell them that is what you voted for.

Volunteer for Jared Polis, who is running for governor. He fully supports legalization and is the first and only candidate to have a cannabis coordinator on staff.
KEEP WESTWORD FREE... Since we started Westword, it has been defined as the free, independent voice of Denver, and we'd like to keep it that way. With local media under siege, it's more important than ever for us to rally support behind funding our local journalism. You can help by participating in our "I Support" program, allowing us to keep offering readers access to our incisive coverage of local news, food and culture with no paywalls.
Make a one-time donation today for as little as $1.