Filmmaker Windy Borman Talks Puffragettes and The Women of Weed 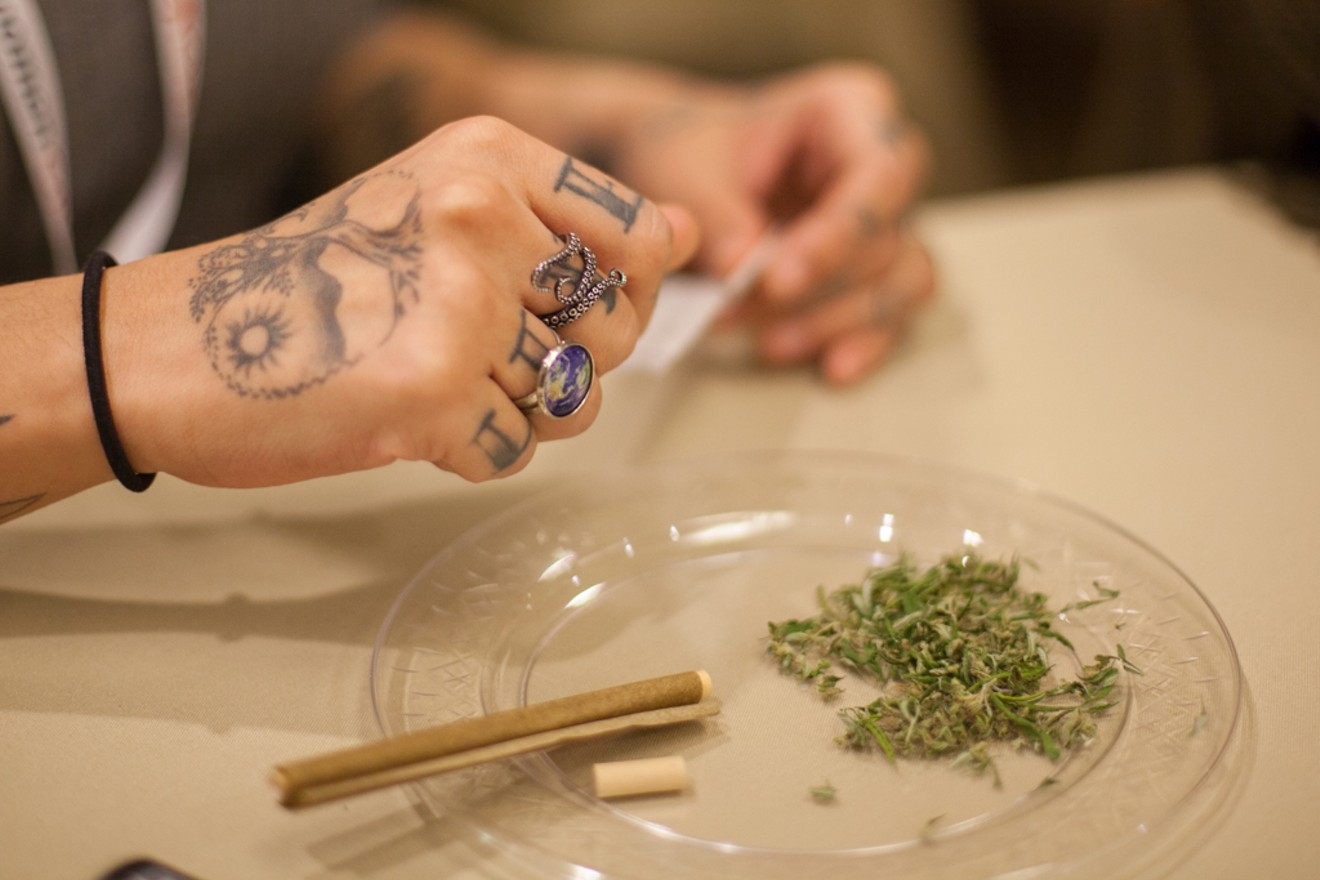 Don't forget: It's female cannabis plants that grow the sweet and sticky stuff. Jacqueline Collins
Windy Borman grew up during the height of the DARE era in the ’80s and ’90s. She never smoked cannabis, which she knew as a gateway drug, because addiction ran in her family.

But Borman, 37, moved to Colorado for a job in 2014, the same year recreational pot was legalized. She had produced and directed films on topics such as elephants that stepped on landmines and learning disabilities, but she found a new subject in her new home: women in the cannabis industry.

Borman’s film, Mary Janes: The Women of Weed, will hold its Mile High premiere on Saturday, March 3, at the Alamo Drafthouse Cinema in Littleton. While making the movie, Borman found that the industry served as a starting point for more social-justice issues than just gender parity. It also cultivated conversations around the prison industrial complex, environmental sustainability and big pharma, she says.

After completing a fall film-festival circuit, Borman will travel to four more festivals this spring. She's also doing a grassroots tour in seven cities across the country, including Denver, to stir up conversations around cannabis in local communities. In an interview with Westword, Borman talks about “puffragettes,” today’s social challenges surrounding cannabis and the first reactions to her film.

Westword: For someone who doesn’t know a lot about the film but wants to know more, how would you describe it?

Windy Borman: My really nerdy film-theory answer is we’ve made a film about female empowerment that’s not about oppression — it’s about opportunity. Someone might see it and say it didn’t talk about women, but it is about women. There are 36 of them in the movie. We’re just not talking about how hard it is to be a woman in the industry.

What the film does is explore my relationship to the plant. I’m actually an on-camera narrator, and I go on a journey to meet these female leaders, and they tell me how cannabis can solve some of the biggest social issues of our time. It’s a very broad, far-reaching topic, yet it’s pretty wonderful and amazing to see so many powerful, educated, inspiring women in one film. It’s so amazing to see this many women in a film, because normally they’re the sidekick or the girlfriend or the mom. To have it be told from their perspective has been very powerful.

The film features dozens of women deemed "puffragettes." What is a puffragette?

“Puffragette” is a combination of pot and suffragette, and we define it as a woman or man who is working for gender parity, social justice and environmental sustainability in the cannabis industry.

Do you consider yourself a puffragette?

Yeah, I definitely feel like I became puffragette over the course of the film.

What drew you to cannabis?

Really, it was the statistic that I heard that in 2015, that 36 percent of senior leadership in the cannabis industry were women. When I heard the statistic that more female leaders were coming to cannabis, that was intriguing to me. As I started to dig into this, I realized you couldn’t separate the industry from social-justice issues like environmental sustainability, the prison industrial complex and gender parity. Right away I knew that this topic was pulling on my core values.

How did you realize that weed was so closely connected to social-justice issues?

When I started my research process, I started by doing phone interviews with over 100 different people across the U.S. It was men and women inside and outside the cannabis industry, and everyone was very generous. They helped lay the groundwork for the larger vision.

[I heard about] the statistic from the American Civil Liberties Union that people of color are at least 3.7 times more likely to be arrested for cannabis use than whites, but we know that cannabis use is pretty consistent across the board. The drug war is just an excuse to keep people of color in jail; it’s just this horrible cycle.

Cannabis is an opportunity to create a profitable industry, and at the same time, the people I’m talking to in the film are working to make sure that it’s an equitable industry. 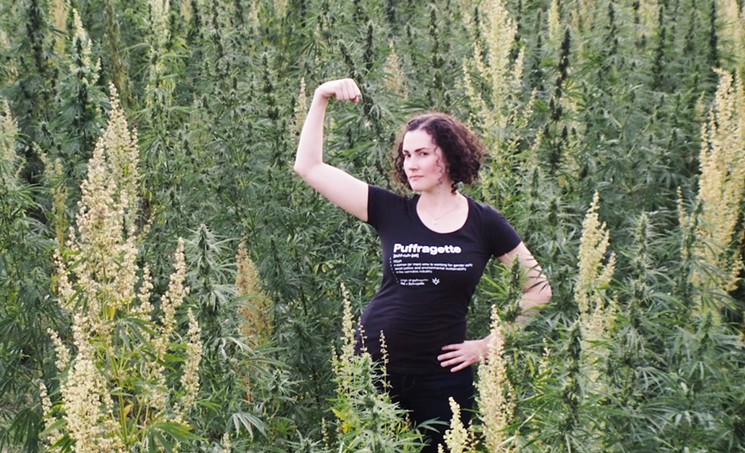 Windy Borman will be at the documentary's premiere to chat with the audience and answer questions.
Courtesy of Windy Borman
Why is the cannabis industry different for women?

Women are coming to the industry because they get to create the corporate culture that they want. Maybe it’s more flexible working hours so they can be with their kids, or maybe it’s becoming CEO. We also know that when women and people of color are in leadership positions, they hire more diverse employees, they work with more diverse colleagues — and that leads to more successful companies, because you have multiple perspectives.

I think the other thing that women are bringing to the industry is the focus on health and wellness. They don’t want the sort of product that will make them couch-locked, nor do they want the largest possible bong. At a conference on cannabis I heard a man say, “Women are gonna be what saves this industry.” Prior to that, there was a big doubt as to whether the stoner image was gonna be enough to sustain the business.

What challenges do women still face?

The statistic was that 36 percent of senior leadership was women when I started the project, and by the time the film came out last fall, it fell to 27 percent. I think part of that challenge is we have a new wave of funding in the cannabis industry. And old rich white men like to give money to old rich white men. There are a lot of outsiders who are coming into the industry, and they’ve got millions of dollars in the bank, and they’re pushing out the smaller business. So there’s a distinct challenge right now just based on that.

Also, just because there are more female leaders in the industry, it doesn’t necessarily mean that people are not facing sex harassment, abuse, coercion and those sorts of things. There’s another model for doing business that’s seeping into this industry, sadly, and some would say it’s been there before.

There’s hiring expectations, too: What gender’s allowed to do, and what type of job. There are a lot of stereotypes and bias around that in the industry, still. That said, the film is focused on the opportunity that women and people of color can find in the industry.

Do you see any work being done to increase racial diversity in the industry?

We were filming in 2016, when California and Massachusetts were working on legalizing, and it was really great to see how they were writing the laws. They wrote the laws to make sure that people of color were given as much access to the industry as whites. Part of that was expunging criminal records, which is what California included. Massachusetts said that even if you had a prior drug conviction, you may not be excluded from the industry. This is a way that we could solve some of the social-justice issues.

What do you hope people take away from watching the film?

Well, I hope that they leave empowered and informed. Empowered to make a new decision in their life, and that doesn’t necessarily have to include cannabis. And I hope that they’re more informed about cannabis. Maybe it’s an opportunity to have a conversation with someone in their family who wants to get off pain medications or change how many pharmaceuticals they’re on. [I hope] they have a bit more information and they feel safe to go asking questions.

What kind of reaction have you gotten so far?

We had sold-out screenings on the film-festival tour. That was a pretty clear indication that we were on to something, and that people wanted to show up and have that conversation.

[At the first grassroots tour stop] in Vermont, there was a woman who said the film left her feeling so inspired to be a woman. Whether you see someone who’s having a similar experience to you in that film, you can walk out feeling like, “Damn, it’s so good to be a woman. I’m gonna go out and change the world.”

If women are empowered, watch out, because that’s when things really change.