Robhots Plus gummies include strain-specific terpene information on the packaging. Courtesy of Robhots
Rosin gummies are here to stay. What started as a niche market sector has sprouted into a major edibles category in just two years, with popular local extractors and national brands alike making fruit chews infused with the solventless cannabis extract.

Unlike distillate, a refined form of THC commonly used by edibles manufacturers, rosin needs good starting material because the extraction is essentially all about squeezing the good stuff out of cannabis or bubble hash. The process results in a more natural mix of terpenes and cannabinoids, and a very effective high.

Here are ten Colorado edibles makers with rosin-infused gummies on the market:

Dialed In
The OG of rosin edibles, Dialed In Gummies launched in 2020 and quickly ascended after shoppers experienced the flavor profiles and fuller effects. Dialed In's sous-vide technique — a method that applies pressure to vacuum-sealed bags placed in hot water — allows the gummies to retain more terpenes, flavonoids and cannabinoids, according to the company. Each container of Dialed In Gummies includes names of the strains used in production, which are sourced from a long list of popular Colorado growers and rosin extractors.

710 Labs
If there's anything 710 Labs is known for, it's quality, which is why the grower, extractor and now edibles maker took its time in releasing a line of rosin gummies in Colorado. The floodgates are open now, though, and you can find 710's vegan, natural gummies across the state. No flavors are added to the fruit chews, which are infused with the same famous 710 rosin that customers dab. That leads to one heavy-hitting — and -tasting — solventless edible.

Olio
Less than a year old, Olio's new rosin gummies weren't released without plenty of research and development, according to the company. Olio partnered with Day Three Labs, a Denver-based cannabis science firm with a licensed research facility in Israel, to come up with an infusion process that allegedly enables a stronger, more clear-headed edibles high. Each container of the Olio's rosin gummies includes a QR code that consumers can scan to learn more about the technology behind the gummies, as well as leave feedback about their respective experiences. 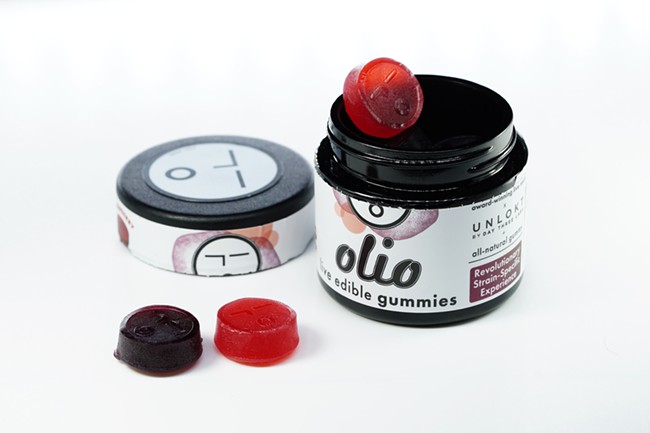 Olio's first foray into edibles includes four flavors of rosin-infused gummies: blueberry, strawberry, green apple and watermelon.
Courtesy of Olio
Robhots
The "bho" in Robhots originally stood for butane hash oil, but the Southern Colorado gummy maker has evolved far beyond that. The brand's new line of Robhots Plus rosin gummies is just over a year old, but has already worked with some of the state's top solventless extractors, including AllGreens, Apothecary Extracts, Leiffa and Terpman & Rosin. Each batch of gummies is made with strain-specific rosin, with terpene information included on the label.

Tastebudz
Tastebudz has quietly released a line of rosin gummies available in four flavors — blue raspberry, kiwi-strawberry, tropical punch and watermelon — and a variety pack. Unlike most edibles makers, Tastebudz squeezes its rosin in-house, and the Colorado-based gummy brand promises that each batch is strain-specific.

Summit Select
This Colorado-grown company grows flower and produces extractions, so a rosin edible was an easy step. Summit's gummies are strain-specific, with all three flavors matching well with their cannabis strain infusions. The strawberry-banana gummies were made with rosin derived from Staw-Nana, the sour watermelon chews come packed with Watermelon Sorbet rosin, and the citrus melody gummies were made with rosin from 24 Karat, a strain known for its lemon, lime and grapefruit flavors. 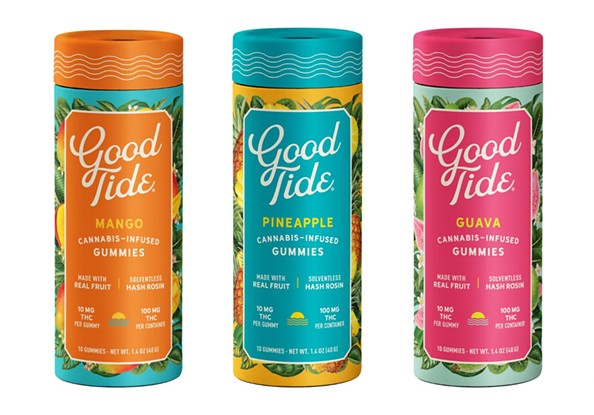 Wyld's first step into rosin edibles comes under the Good Tide label.
Courtesy of Wyld
Good Tide by Wyld
Once Wyld, one of the largest cannabis gummy makers west of the Mississippi, entered the rosin game, we knew this wasn't just a fad anymore. Now available in Colorado under Wyld's new Good Tide line, the three tropical flavors of rosin gummies — guava, mango and pineapple — are each dosed with 10 milligrams of solventless THC extract.

Rebel Rozzies
We haven't tried Rebel Edibles' new rosin fruit chews yet, but the company's THC caramels are incredible, so we have high hopes for Rebel Rozzies. Sticking a few candy pebbles (aka generic Nerds) on top of the gummies is great first start. Rozzies come in fruit punch, mango-peach, mixed berry and sour watermelon flavors, with a small group of strains (all listed on Rebel's website) responsible for the solventless infusion. 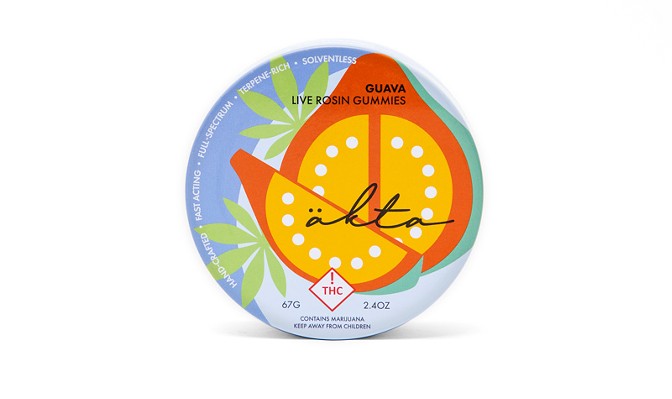 Äkta's rosin gummies currently come in seven different flavors.
Courtesy of Äkta
Äkta
Äkta makes rosin badder, live heads, vape cartridges and gummies infused with live rosin, sourcing flower from sister company and greenhouse cultivation Hava Gardens. The in-house production cuts out the cost of teaming up with a growing partner, and that's reflected at the cash register without a drop in quality. Äkta currently has seven flavors of live rosin gummies; our favorite is the papaya, which also happens to be the name of one helluva rosin-producing strain.

Cheeba Chews and Green Hornet
Cheeba Chews may have been the first national edibles brand to jump on the rosin wave in Colorado. The company's foray into rosin edibles started with a collaboration with Soiku Bano, one of the state's most popular new solventless extractors, with more partnerships following. Select Cheeba Chew taffies and Green Hornet gummies are infused with strain-specific live rosin. There will be new flavor and strain pairings each quarter going forward, according to Cheeba Chews, so don't wait around to grab a combination you like.
KEEP WESTWORD FREE... Since we started Westword, it has been defined as the free, independent voice of Denver, and we'd like to keep it that way. With local media under siege, it's more important than ever for us to rally support behind funding our local journalism. You can help by participating in our "I Support" program, allowing us to keep offering readers access to our incisive coverage of local news, food and culture with no paywalls.
Make a one-time donation today for as little as $1.