Andrew Freedman addresses a marijuana symposium. Kate McKee Simmons
In November, Massachusetts voters approved recreational marijuana; that state was supposed to start legal sales in January 2018 — but now that date has been pushed back at least six months.

Personal possession, use and cultivation of cannabis became legal in Massachusetts on December 15, but last week state lawmakers voted to push back the licensing of any recreational stores until July 1, 2018.

This means that while possession in Massachusetts is legal, the sale of marijuana won't be for at least eighteen months.

"This short delay will allow the necessary time for the legislature to work with stakeholders on improving the new law," Massachusetts Senate President Stan Rosenberg said in a statement. "Luckily, we are in a position where we can learn from the experiences of other states to implement the most responsible recreational marijuana law in the country." 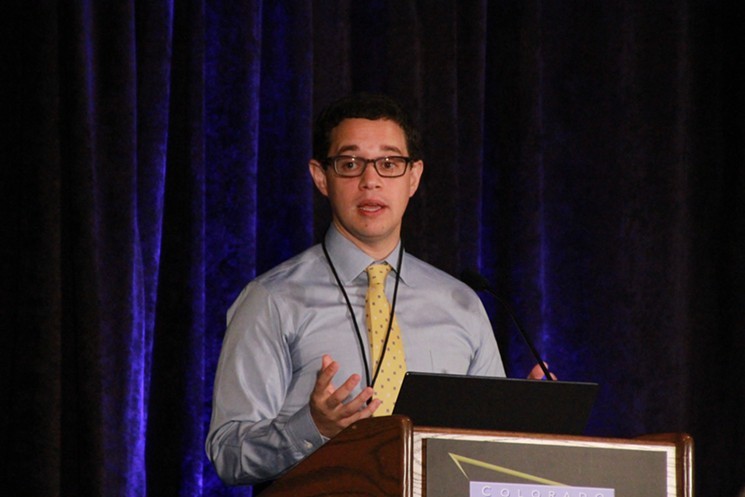 Andrew Freedman addresses a marijuana symposium.
Kate McKee Simmons
And Colorado is definitely one of those states. After the passage of Amendment 64 in November 2012, Colorado was able to get a system for recreational marijuana sales up and running by January 1, 2014. And other states have definitely taken notice of how smooth implementation has been in Colorado.

The Boston Globe  reports that Andrew Freedman, Colorado's director of marijuana coordination, is a contender to be one of three regulators who will over see the recreational marijuana industry in Massachusetts.  Freedman says he has not been offered a job by the State of Massachusetts, but working for another state as an employee or a consultant could be an option moving forward — particularly because Colorado's Office of Marijuana Coordination could disappear.

"In the November 1 budget request," Freedman points out, "we asked to discontinue this office with an eye on good government and a recognition that a central coordinating role should be short-term."