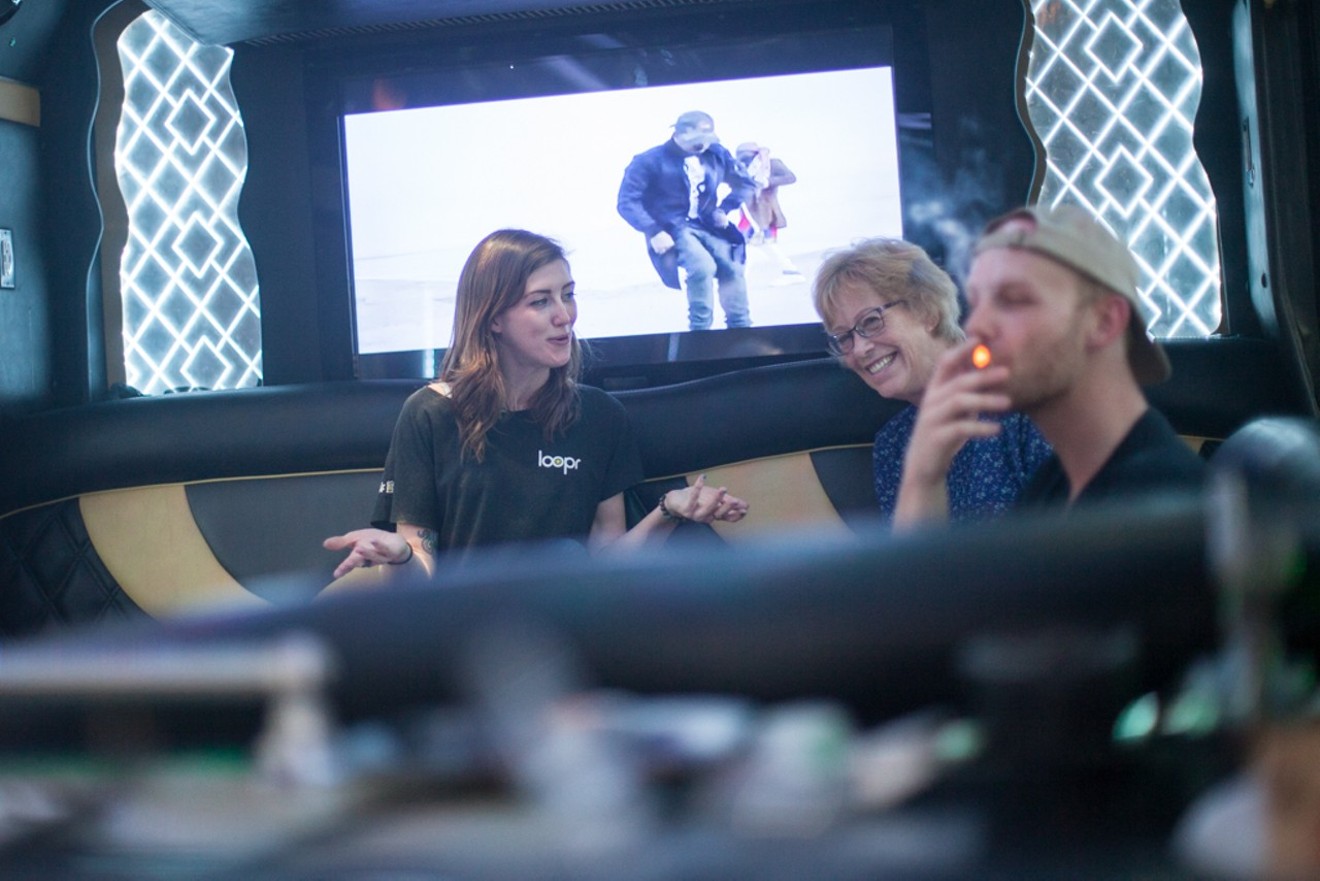 The Loopr will show the movie on 56-inch TV screens. Jacqueline Collins
Denver is large enough to have regular movie screenings and conversations with successful filmmakers, but not many cities can host those events in a pot lounge on wheels.

And that's exactly what the people behind Once Upon a Superhero and the Loopr mobile cannabis lounge want to create.

On Thursday, February 28, the two sides are teaming up for a Denver premiere of Once Upon a Superhero, a science-fiction movie about a man who claims to be from the sun and have special powers. The Loopr bus will be showing the movie, and Once Upon a Superhero writer and director John Kline and producer Scott Weil will be riding along for the Loopr screening.

Kline and Weil have been screening the movie around the country since winning awards at several independent film festivals. According to the filmmakers, Once Upon a Superhero was made with "no permits, no rules and no budget" out of an apartment over six years. Find the description from the movie's website and a trailer below:

A homeless wanderer, named Solar Flare, proclaims to be a real superhero from the Sun who's been exiled to live on Earth without his superpowers for 189 days. From the personal discovery of why he was sent here (to save this planet from an apocalyptic solar flare), to the array of bizarre characters that misguide him, we follow the lost 'superhero' on what quickly becomes a downward spiral journey into the underbelly of Hollywood...a place he comes to realize is not worth saving.

The fun at begins at 8 p.m. February 28. Loopr riders (21+) must register beforehand and be ready at a pick-up spot shared upon registration; Loopr tickets are $35. You must bring your own cannabis to consume on the bus, which is outfitted with 56-inch televisions to show the movie.

Believe it or not, this isn't even the first time Denver has hosted such an event. In 2015, Alamo Drafthouse teamed up with acclaimed screenwriter Paul Thomas Anderson, taking 25 contest winners on a 4/20-friendly bus ride around town before screening Anderson's latest flick at the time, Inherent Vice.
KEEP WESTWORD FREE... Since we started Westword, it has been defined as the free, independent voice of Denver, and we'd like to keep it that way. With local media under siege, it's more important than ever for us to rally support behind funding our local journalism. You can help by participating in our "I Support" program, allowing us to keep offering readers access to our incisive coverage of local news, food and culture with no paywalls.
Make a one-time donation today for as little as $1.