Mother-Daughter Duo Are Innovative Yet Old-School With Cannabis Edibles The mother-daughter duo behind Sweet Mary Jane, Lucienne Bercow (left), and Karin Lazarus. Courtesy of Sweet Mary Jane
What would you do after winning a cash prize from a prestigious baking contest? For Karin Lazarus, the answer was clear: create a cannabis-infused edibles company.

As medical marijuana commercialization took hold in Colorado over fourteen years ago, Lazarus was fascinated with cannabis but hadn't been much of a consumer since her college days.

"I just always loved the idea of it, and after I won that cooking contest, I had some money, and I knew that cannabis was legal here," she recalls. "I knew that I had a better chance of doing something in the cannabis industry than taking this money and using it for a regular bakery."

In 2010, Lazarus won the grand prize in the Chocolate Adventure Contest, using her $10,000 in prize money to launch Sweet Mary Jane Bakery, a food-first edibles company for medical marijuana patients. The Boulder operation started out with Lazarus experimenting with infusing cannabis into her favorite personal recipes. A few years later, her work drew the attention of cannabis enthusiasts and the cannabis-curious alike.

"Random House won the bid," she says, "and they wanted this cookbook done, fast." She enlisted the help of her daughter, Lucienne Bercow, to craft 75 infused recipes for the book. Bercow had just graduated from college and was willing to test her mom's new form of cooking.

"I didn't even know much about it," Bercow says of her previous experience with cannabis. "I guess when the business got started, it seemed really cool, but I didn't have any idea of what the market would turn into."

Lazarus's book, Sweet Mary Jane: 75 Delicious Cannabis-Infused High-End Desserts, was published in 2015. After her cookbook was published, Lazarus had no interest in writing another while she and her daughter focused on the bakery, but the edibles sector has evolved quickly in seven years.

"Just recently, we have been talking about doing it again. A lot of people have asked, and everything has changed so much from when we were doing that cookbook," she explains.

Lazarus cooked with infused sugar and cannabutter for her 2015 cookbook, but today Sweet Mary Jane and the majority of edibles manufacturers use distillate, a refined form of THC extract; she's also recently started making products with rosin, a naturally extracted concentrate that retains a fuller spectrum of cannabis compounds. 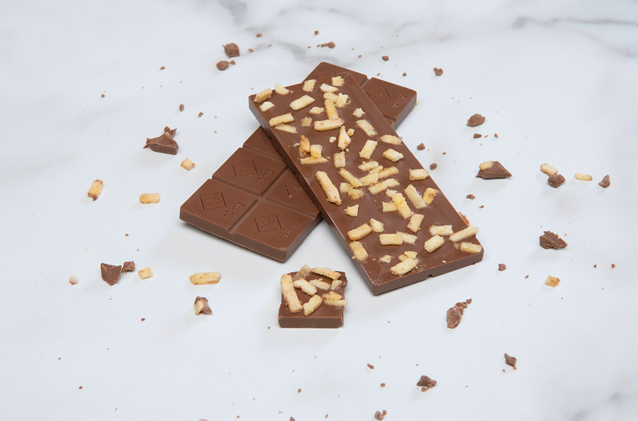 Using her background with baking, Lazarus riffs on classic flavor combinations to come up with unique edibles, like a milkshake and fries chocolate bar or horchata cookies. In their pursuit of what they call "munchies that give you the munchies," Lazarus and Bercow have also created savory edibles, like infused popcorn. Most of Sweet Mary Jane's recreational products contain 100 milligrams of THC overall, but each box of Sweet Mary Jane popcorn — sold in buttered, caramel and cheddar flavors — is infused with just 10 milligrams of THC and 100 milligrams of CBD.

"We thought about that a ton with the popcorn, in terms of potential for a cannabis-curious person or a brand-new user," Lazarus notes. "Now we've turned it into what we call a mood food — this kind of low-dose avenue where you can eat food that makes you feel really good, and you're not going to get super high."

Sweet Mary Jane still bakes the classics, like pot brownies and cookies, too, but Lazarus has adjusted heavily to meet the demands of more regulations since her start thirteen years ago.

Recipes and experiments like hazelnut cookies can no longer be whipped up on a whim, she laments, because the necessary research, development and laboratory testing can take months. "I think [product] testing is very important," she notes, "but because testing is so expensive, you can't make a batch of 200 cookies. You have to make a larger batch."

Sweet Mary Jane's infused popcorn was named Westword's Best Non-Candy Edible of 2022.
Courtesy of Sweet Mary Jane
Packaging rules that make it virtually impossible for customers to see her products and "THC" warning stamps on edibles servings is frustrating for Lazarus and the pride she takes in her work, but she understands that compromises are necessary for child safety. Her bigger beef with the cannabis industry is the lack of women in the workplace.

During their tenure in the cannabis industry, the mother-daughter pair has noticed a drop in the amount of women in cannabis, which has only recently started to reverse.

Bercow, who entered the industry several years after her mother, says female cannabis entrepreneurs were widely celebrated for their contributions until about 2018: "I came in a little later, and it was being highlighted quite a bit at the time," she says. "I just remember after the Women of Weed documentary came out, it was on a downturn from 2010 through 2018."

"There were women to talk to who owned dispensaries and grows, and that just started to wane over the years," Lazarus remembers. "These bigger companies came in, and I think it's much easier for men to get funding, and I think that's how a lot of these places grew. A lot of these women just lost their footing, and they weren't able to hang on."

Lazarus and Bercow have seen more women in cannabis within the last couple of years as the importance of leadership diversity and inclusion has become more recognized within the industry. To help that momentum continue, the woman-owned bakery continues crafting new products for Colorado dispensaries, including new chocolate bar flavors and miniature cheese-flavored crackers.

"They're absolutely adorable. We've been working on them for quite a while, and we've finally got them to where they look like little Cheez-Its, and they're crispy," Lazarus says of the crackers. "I don't know what the next one will be, but we'll get this one launched and take it from there."
KEEP WESTWORD FREE... Since we started Westword, it has been defined as the free, independent voice of Denver, and we'd like to keep it that way. With local media under siege, it's more important than ever for us to rally support behind funding our local journalism. You can help by participating in our "I Support" program, allowing us to keep offering readers access to our incisive coverage of local news, food and culture with no paywalls.
Make a one-time donation today for as little as $1.