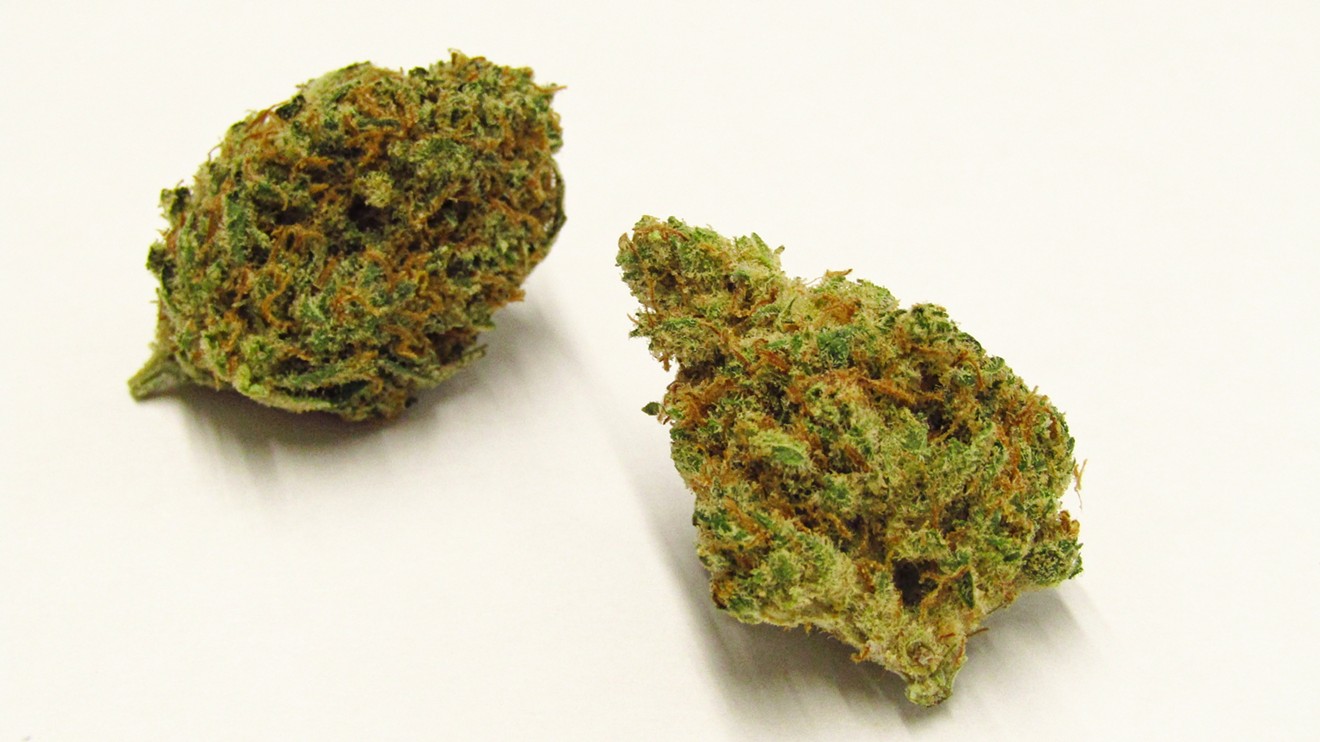 Don’t fall for Mr. Clean’s snowballing high, and you’ll shine through the afternoon. Herbert Fuego
I’ve been on a Diesel kick lately: The high never gets old, and that classic smell is criminally underrated today. After three weeks of tasting nothing but rubber and gas, though, it was time for something new. Mr. Clean, a young strain from Exotic Genetix, seemed like it would deliver the coffee-like buzz I was looking for, but being named for a chemical cleaner raised some questions in the flavor department, and I never know how aloof these heady strains will make me.

Talking to the budtender about Mr. Clean’s parents, Lime Skunk and the Cube, made me more intrigued and comfortable with the choice. I’ve always liked Lime Skunk, a margarita-like strain that doesn’t come around often, and the Cube’s lineage — a back-cross of the rare Starfighter strain — would add a balancing ingredient to ensure that the buzz didn’t go too far. Or so I hoped.

I can’t remember the last time I smelled the real Mr. Clean outside of his Magic Erasers, which are a life hack at cleaning shoes. There’s no doubting the fumes in Mr. Clean’s weed, but they’re more tart and rubbery than chemical, and the sourness is accompanied by lime notes that remind me of Hawaiian shaved ice flavoring rather than lime juice. A Tom Collins aroma is fine with me, though, and a trademark of good daytime strains.

Mr. Clean’s flavor (or lack thereof) was bland and could certainly use improvement, and the high took a while to kick in. Still, this was a solid strain for a daytime user looking for something new. I became productive after learning to respect the snowballing effects, and never had any bouts of anxiety, despite losing focus for short handfuls of time. My appetite remained the same, and the cottonmouth never really showed. These are all wins in my book when I’m smoking before 4 p.m., and rarely all occur with a single strain. Talk about keeping it clean!

We’ve sniffed out Mr. Clean at Golden Meds, Leiffa, Lightshade, Lova, Lucy Sky, Oasis Cannabis Superstores, Solace Meds and Xclusive Cannabis. LoCol Love supplies the majority, if not all, of the Mr. Clean flower around town, but a handful of extractors make concentrated forms of the strain, too.

Looks: Mr. Clean tends to stay on the brighter side, with a very sativa-like bud structure. Gnarled, sugary leaves intertwine with the lime-green calyxes, giving the buds a pillowy feel that can be hard to break up at the preferred moisture level, so you might need to work a little harder on the grinder.

Smell: Sweet, sour and invigorating from the jump, Mr. Clean’s lime and citrus characteristics remind me a lot of Golden Goat, but with sugary notes of sherbet and a more prominent hint of chemical dish cleaner.

Flavor: Mr. Clean’s flavor wasn’t as sweet and sour as I’d hoped, tasting more floral and grassy (a common complaint about the strain) than anything lemon-lime, with a slightly gassy aftertaste.

Effects: Mr. Clean’s high likes to grow on you, and those fluffy buds look like more than they weigh, so don’t rip through three bowls in ten minutes. You’ll be curious, but won’t have any direction or the ability to form a coherent sentence. Give it five minutes to kick in, and enjoy the daytime high. It’s one of the more productive out there.

Home grower’s take: “Maybe it’s harder to find good clones of it or something, because it seems built for dispensaries. Just shits outs buds in two months, and you can cut it in seven if you want to. I’ve only seen it sold as seeds, though, so maybe that’s why. The buds were kind of weird, and went from fluffy to shriveled over a few days after one of my harvests. Good high, though, and great lime terps.”