Vicente Sederberg's Mason Tvert (middle) gathered members of the Colorado General Assembly and hemp industry to celebrate industrial hemp's impending federal legalization. Thomas Mitchell
Congress made long-awaited history this week when it put language that would legalize industrial hemp in the 2018 Farm Bill, which President Donald Trump is expected to sign into law.

Colorado, which has more acreage devoted to registered hemp farms than any other state under a pilot program, is better equipped for the predicted boom than most of the country. Appearing in a joint press conference on December 14 outside the cannabis law firm Vicente Sederberg, several key members of the Colorado Legislature and the hemp industry shared their enthusiasm over new opportunities opened up by the Farm Bill.

"I'm very excited about this decision we're celebrating here today," said state senator Kerry Donovan, upcoming chair of the Senate Agriculture, Natural Resources and Energy Committee. "So how do we take this industry that's just sprouting, and take it to more communities?" Donovan suggested that the Colorado Department of Agriculture's registration program for hemp farmers, in operation since 2014 and responsible for overseeing over 1,000 growing licenses, was a "successful test case for Washington, D.C., to look at."

Dylan Roberts, state representative and upcoming chair of the House Rural Affairs Committee (formerly the House Agriculture, Livestock and Natural Resources Committee), expressed hope that the pending federal legalization will bring more jobs and tax dollars to Colorado's rural areas. "This is a great day for rural Colorado," he said. "We will see hundreds of more jobs and millions of more dollars pour in."

Once legalized federally, industrial hemp farming will be regulated by the United States Department of Agriculture. States that have already legalized hemp research and pilot programs, including Colorado, Kentucky and Oregon, will continue operating under their own rules until the USDA finalizes its regulation, according to Vicente Sederberg attorney Shawn Houser. 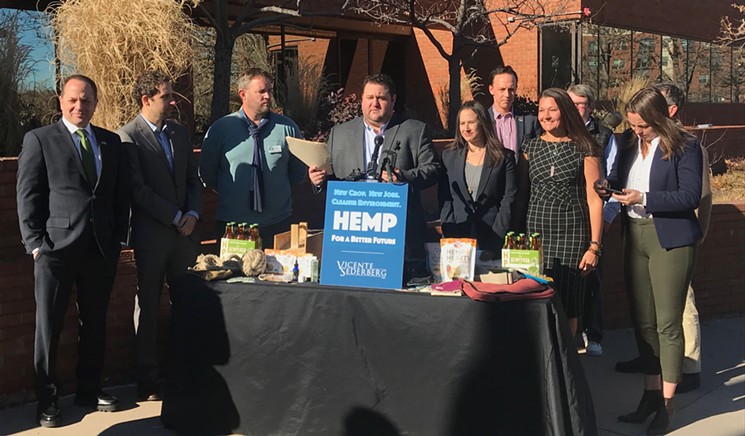 Vicente Sederberg's Mason Tvert (middle) gathered members of the Colorado General Assembly and hemp industry to celebrate industrial hemp's impending federal legalization.
Thomas Mitchell
Houser, who chairs her law firm's hemp and cannabinoids practice group, explained that states can operate under their own plans for up to a year after the USDA adopts federal regulations; if states wish to continue managing hemp farming under their own rules, they can submit a request for USDA approval.

According to Colorado Hemp Industry Association boardmember Rick Trojan, the state's hemp trade accounts for anywhere from $100 million to $200 million annually, and that could be conservative. That number will undoubtedly increase after federal legalization, he added, and it won't just be thanks to hemp-based foods and wellness products. Most of the American clothing, food and beverage, cosmetics and wellness companies that currently use industrial hemp import it from Europe, Canada and Japan, where the plant is regulated as an agricultural commodity and not as a drug, as hemp currently is in this country.

Patagonia environmental coordinator Mark Stevens and New Belgium Brewing spokesman Jesse Claeys both said that their respective companies were excited to increase their relationships with Colorado's hemp industry, using the plant for textiles and even a brewing ingredient. Stevens, who oversees various grants for environmentally focused groups in the Rocky Mountain region, said that Patagonia may even fund hemp farming and research projects in the future.

Although Colorado is many steps ahead of the majority of the states in this country, Colorado's hemp industry could still add some diversity to its business portfolio, Houser said. While the state leads the country in acreage for hemp farming, she believes that Colorado is still behind Kentucky as a leader in research and processing.

"We need more than just farmers here," she concluded.
KEEP WESTWORD FREE... Since we started Westword, it has been defined as the free, independent voice of Denver, and we'd like to keep it that way. With local media under siege, it's more important than ever for us to rally support behind funding our local journalism. You can help by participating in our "I Support" program, allowing us to keep offering readers access to our incisive coverage of local news, food and culture with no paywalls.
Make a one-time donation today for as little as $1.