Sal Pace has been a Pueblo County commissioner since 2013. Courtesy of Sal Pace
Most Colorado politicians have come around on legal cannabis since the state’s voters approved Amendment 64 in 2012, but much of their support started after the pot industry became a major financial player in the Colorado economy. Some Colorado officials were pushing for the plant long before it became sexy, though, and few have as many notches on their belt as Sal Pace.

Pace has been championing the cannabis industry as an economic boon for Pueblo County since he started serving as the state representative for the area in 2008. After two terms in the Colorado House, he was elected to the post of Pueblo County commissioner in 2013, the year before retail marijuana operations began in Colorado. Since then, Pace has continued to call Pueblo the “Napa Valley of cannabis,” embracing outdoor and greenhouse growing operations and viewing cannabis as a viable option for his community’s agricultural growth.

Already a proponent of legalization, Pace dove deeper into the cause in early October when he joined the national Marijuana Policy Project’s board of directors. With his expertise on cannabis policy, Pace hopes to help push legalization farther across the country while also growing Pueblo’s green thumb. We recently caught up with Pace to learn more about his local and national plans.

Chronicle: How do you believe the cannabis industry has impacted Pueblo County?

Sal Pace: Cannabis legalization has been great for Pueblo. With nearly 200 cultivation licenses, Pueblo has become the Napa Valley of cannabis in Colorado. We’ve seen hundreds of millions of dollars in capital investment, thousands of people employed and the biggest real estate boom in our community’s history. Cannabis construction dollars accounted for 50 percent of all Pueblo County construction when we needed it most during the Great Recession.

Not coincidentally, we’ve seen Pueblo turn into a cannabis-research hub. We established the Institute of Cannabis Research at Colorado State University-Pueblo. Dozens of professors are studying efficacies of the plant’s cannabinoids; a research journal has also been established. In the long run, the research opportunities will be the most lucrative for our community.

Amazingly, 8 percent of our county government’s general fund now comes from cannabis tax revenue. These funds have transformed Pueblo. For instance, we now offer a college scholarship to every high school graduate from cannabis tax dollars.

What advantages does Pueblo County have over Denver in terms of cannabis cultivation?

Since 2014, we’ve seen much of the cultivation marketplace gradually move south out of Denver and into Pueblo. There are a number of variables affecting this transition. First, after Amendment 64 passed, Denver was not issuing new licenses. People looking to enter the marketplace had few options where to operate. In Pueblo, we allowed a free-market approach. Not many communities welcomed marijuana businesses like we have.

After business owners and investors found our regulatory environment welcoming, they realized there’s a significant business advantage to cultivate in Pueblo. For instance, we were the first community to allow outdoor and greenhouse cultivations. I frequently tell operators that in Pueblo, the sun is free. We are lower altitude and latitude than other places in Colorado. We receive 350 days of sunlight, and our harvest season is considerably longer. Indoor cultivations spend considerable money on utility bills lighting their crops, while Pueblo operators don’t have that expense. Ultimately, market forces will drive more operators away from indoor operations as customers pay attention to the carbon footprint of their product.

In addition, Pueblo and southern Colorado have not seen the economic growth that the rest of the state has felt. That means that property is far more affordable here, and there’s a higher percentage of workers available to work the cannabis farms. Pueblo’s residents are largely descended from steel workers and farmers who know the value of hard work. All of these factors have driven many of the largest operators in Colorado to move cultivations to Pueblo; virtually every dispensary in the state has products (usually infused products or oils) that were farmed in Pueblo.

When interstate commerce is ultimately allowed, Pueblo is in the best position to be a national cultivation hub. The infrastructure is already in place, the weather is ideal, and our cannabis farmers are producing product at the lowest price point in the nation. 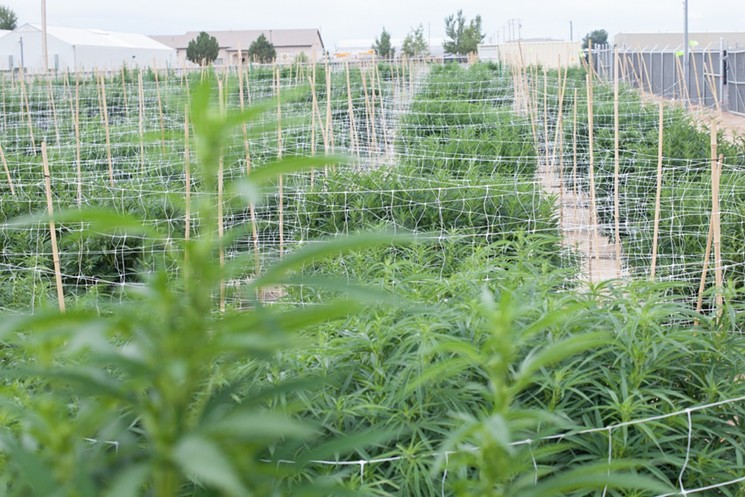 Outdoor cannabis cultivations are all the rage in Pueblo County, partly in thanks to Pace's efforts.
Jacqueline Collins
What’s the bigger export from Pueblo these days, chiles or cannabis?

Ha! Pueblo is known throughout the region for being the chile-growing capital. Connoisseurs even now have the opportunity to purchase a Pueblo chile license plate. As far as volume [goes], chiles remain number one — but cannabis is larger in revenue and employees. Chiles wholesale for $1 per pound, while cannabis is going for $300 per pound wholesale. Our economic-development office estimates chile farm employment at 750 people, while cannabis is at 2,500 employees, not including ancillary businesses.

Chiles have political advantages. Chile farmers don’t have the same regulatory burden as cannabis farmers, and their products are shipped across state lines, while licensed cannabis is only sold within Colorado.

What are your thoughts on the reports of illegal growing activity in Pueblo County and other southern Colorado communities? Do you think there’s a link between cannabis legalization and those grows?

Recent Colorado statutory changes regarding home grows have really cut down on black-market sales. In reality, most of the illegal home grows were claiming to operate as medical marijuana caregivers. They were abusing loopholes from Amendment 20, which passed in 2000; they had no correlation to adult use or Amendment 64. According to an Arcview study on legal marijuana markets, Colorado has the lowest percentage of marijuana being purchased from the black market. I attribute that to the maturation of our legal marketplace. With time and more states passing their own legalization measures, we’ll see fewer black-market operators.

What is your new role with the Marijuana Policy Project? How will you share your experiences in Pueblo with other members?

I’m pretty excited to join the national MPP board. The MPP has done more to bring us to the precipice of national legalization than any other organization. MPP has run the political campaigns for most of the state-by-state ballot initiatives across the country, including Nevada, Massachusetts, Maine and even Colorado’s Amendment 64. This year, MPP is running the campaign in Michigan for adult use and in Utah for medical marijuana. We’re currently working on a two-year plan focusing on a dozen states. Nothing brings about the end of federal prohibition faster than states passing their own measures.

I plan on advising MPP on policy as we advance legislation and initiatives in new states. Having been involved with writing much of Colorado’s medical marijuana language and implementing our regulations, I’ve received more experience as a cannabis regulator than virtually anyone in the world. Friends and I joke that a year in cannabis is equivalent to seven real years, because the landscape is moving so fast. If this is true, I’ve got about seventy years of experience in cannabis policy.

Seriously, though, Pueblo cultivates more cannabis than most entire medical marijuana states. Colorado is the most mature marketplace, and we’ve learned already from past experiences. Pueblo is a model for other states to look at when you consider the economic impact and tax revenues. It’s also a story about the cannabis economy benefiting not just the rich, but also those who suffered disproportionately because of the War on Drugs.

Not only is Pueblo the poorest of Colorado’s large cities, we also are the only majority Hispanic city. Our cannabis boom has been showcased on national newscasts and newspaper articles across the globe. I’ve hosted Fortune magazine and the Times of London on tours in Pueblo, two publications that had previously never stepped foot in our city. I’m proud of our success and growth in the marketplace, and I’m happy to showcase it.

What can the state or local governments do to improve their cannabis policies?

Colorado will always hold the distinction of being first, but that doesn’t mean that we’ve figured everything out. For instance, the state needs to finally address the need to identify locations where people may legally consume cannabis. That might be tasting rooms or consumption clubs, but six years after legalization, we still don’t have that issue resolved. We also need to allow for public ownership of cannabis companies. Virtually all of the other legalized states allow for publicly traded companies. Smaller companies in other states are raising billions of dollars in IPOs, putting all of our Colorado companies behind the eight-ball internationally.

We led the world on legalization and regulation of cannabis; I’d hate to see us lose our lead because other states are attracting all the capital. I’m also deeply concerned by the high rate of companies failing to succeed today. That’s the result of an aggressive IRS forcing cannabis companies to pay a much higher rate of taxes due to an obscure federal tax code, 280E, that is being applied to our legal businesses. Plus, we need to come up with a statewide plan to address the supply-and-demand shift in the market. With excess supply in the market, many businesses are struggling to stay afloat. I’m a supporter of the free market; I believe that if Colorado allowed for home delivery and tasting rooms, for instance, then we would see a natural correction in the marketplace.
KEEP WESTWORD FREE... Since we started Westword, it has been defined as the free, independent voice of Denver, and we'd like to keep it that way. With local media under siege, it's more important than ever for us to rally support behind funding our local journalism. You can help by participating in our "I Support" program, allowing us to keep offering readers access to our incisive coverage of local news, food and culture with no paywalls.
Make a one-time donation today for as little as $1.