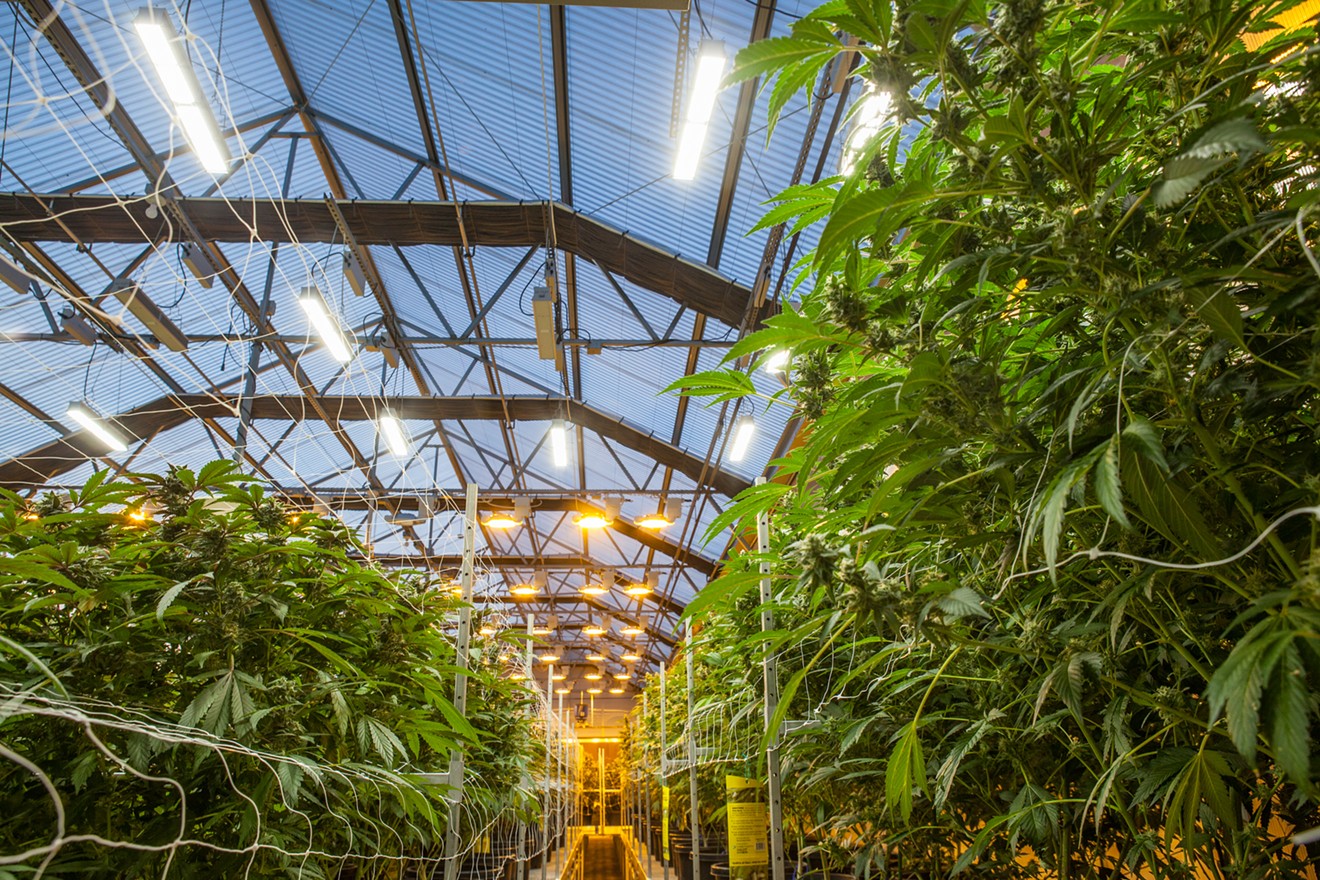 Colorado opened the door to legal marijuana over ten years ago, but one longtime activist still feels like the plant is treated unfairly. Jacqueline Collins
A decade. It’s literally been a decade. Legal weed in the state of Colorado is celebrating ten years.

Amendment 64 declared “regulate like alcohol,” and a decade later, its still not. And it never was regulated in a manner similar to alcohol. Instead, the lazy lawmakers and prohibitionists lurking in the Colorado State Capitol merely adapted and changed the existing medical marijuana regulations in the state and re-labeled them “adult use."

It’s not hard to see. The facts are simple: There are no childproof beer bottles, whiskey bottles or shooters, and there never have been. Having or consuming alcohol in your home is not considered child endangerment, but having cannabis or consuming cannabis in your home with children in Colorado is.

Alcohol is available everywhere: stores, bars, venues, grocery stores, trendy nightclubs and abject hole-in-the-wall bars. Alcohol is advertised in college and professional sports venues and on billboards and train ads, and the list goes on and on. Alcohol does not have a tracking system of “hops to brew," nor are there plant tags to grow hops in Colorado or tags for yeast cultures to ferment local craft brews. And you can buy as much alcohol as you want — unlike cannabis, which has a 1-ounce-per-day limit at dispensaries.

Consulting the liquor code in the state of Colorado proved to be too difficult for Colorado lawmakers to sufficiently regulate cannabis in a manner similar to alcohol. Infused after-dinner cakes should be
available and as common as after-dinner drinks. It should be trendy and fun, and the license to infuse food or beverages should be posted on the wall right next to the alcohol license of your local restaurant or bar. Infused cannabis drinks sold at concert venues and sports arenas should mimic beer sales, even if smoking consumption is not allowed at the venue.

Oh, but they passed weed bars in Colorado, right? Well, yeah...over a year ago. But at the moment, only two exist in the local Denver metro area, and only one allows you to fire up a smokeable product (the other is a vape-only lounge). No infused foods can be made on site at these places, but you can buy pre-packaged edibles found in any dispensary. A third model in a hotel has preliminary state licensing pending a buildout for guest consumption on site. but Colorado authorities have shut down more consumption sites than have been issued licenses in the last ten years. The cost of licensing and the flaming hoops of regulations have kept most players, who are not sure if the model is viable or profitable, on the sidelines.

The failures aren't limited to the lawmakers themselves. Amendment 64 is clear in its intent to regulate in a manner similar to alcohol, but it should have gone further. The amendment was missing the decriminalization process. It should have included wording eliminating the current criminal code within the Colorado laws and releasing the nonviolent cannabis criminals locked up in Colorado prisons — but it didn’t, and despite language protecting cannabis entrepreneurs as law-abiding citizens, law enforcement has handed out cases to licensed dispensaries and its employees since its passage.

Colorado lawmakers have failed in regulating cannabis in a manner similar to alcohol, and now routinely play both sides of the fence. Since cannabis is a Schedule I drug and Colorado hands out licenses to sell cannabis, Colorado is collecting Schedule I tax dollars for sales. At the same time, the state is investigating and handing out criminal cases for the exact same activities by licensed and unlicensed individuals alike, sometimes using both agencies from federal and state governments working in tandem to force an unwanted outcome on individuals and organizations. This has kept the criminal element at play, as well as the black market dollars, violence and thefts that go along with it.

Joe Biden's clemency for possession recently announced before the midterms is another hollow promise. Nobody is currently in a federal prison for cannabis possession alone. And Joe, the predominant author of the Violent Crime Control and Law Enforcement Act that jailed millions for drugs, is not likely to free federal cannabis offenders in prisons across the United States. Biden urged state governors to issue pardons, yet no pardons resulting in a jail release have been granted in Colorado — or any other states, for that matter. Colorado Governor Jared Polis could have easily pardoned all nonviolent cannabis convictions in Colorado upon his swearing-in, but failed to do so. These individuals will give lip service like most politicians, but have failed in any real action resulting in justice. [Editor's note: Polis has issued pardons for those convinced of possession of up to 2 ounces in state courts, but it's unclear how many, if any, prisoners were released as a result.]

Some regulations have been made with public safety in mind. Fire-control laws against making butane hash oil has prevented many explosions and fires from extraction. Yeast and mold regulations have made edibles more safe for consumption. Since recreational cannabis sales began, there has been a decline in consumption among teenagers in Colorado. But most lobby groups that have formed are only concerned about raising the bar of entry too high for the average citizen to participate in the legal cannabis industry. It started as a cottage industry, but after medical marijuana regulations were created in 2010, millionaires pushed in. Now in 2022, billionaire hedge funds are bankrolling huge consolidation operations. These companies are growing sideways, sometimes dropping $50 to $60 million a quarter in posted losses as they consolidate market share. Those lobby groups have huge influence at the State Capitol and Washington, D.C., and their focus is not on citizens' rights or equitable entry into the industry.

What we have been left with is a quasi-legal landscape where sales are permitted but consumption is still frowned upon. We have 2.97 million people in the local Denver area, and currently just one location in which to smoke weed “legally." Bar owners are threatened with their liquor licenses for allowing cannabis consumption. Toking anywhere outside your home can earn you a criminal offense in a court of law. And if you have children at home and consume, child endangerment is a real risk for any Colorado citizen.

We have a system that has allowed minimum-wage budtenders to be arrested at work for selling “legal” weed while a blind eye is turned to stores at the borders that are selling weed to citizens from illegal states. Lobby groups that have built barriers too high to enter are shouting “social equity” to the rafters, passing laws to prevent cannabis felons from entering into the “legal” market in Colorado.

The hypocrisy is real, and no justice has been administered in Colorado. Just the fleecing of the taxpayer and a host of brand-new criminal offenses that we never had before. We passed Amendment 64 as a measure of freedom, but in ten years, the Colorado lawmakers and cannabis lobbies have plagiarized the amendment, put tyrannical chains on our freedom and committed a theft of our taxes.

Chris Jetter is a cannabis activist and entrepreneur in Colorado, and former president of the Colorado Invitational Bong-A-Thon..

Westword.com frequently publishes op-eds and essays on matters of interest to the community; the opinions are those of the authors, not Westword. Have one you'd like to submit? Send it to [email protected], where you can also comment on this op-ed.
KEEP WESTWORD FREE... Since we started Westword, it has been defined as the free, independent voice of Denver, and we'd like to keep it that way. With local media under siege, it's more important than ever for us to rally support behind funding our local journalism. You can help by participating in our "I Support" program, allowing us to keep offering readers access to our incisive coverage of local news, food and culture with no paywalls.
Make a one-time donation today for as little as $1.