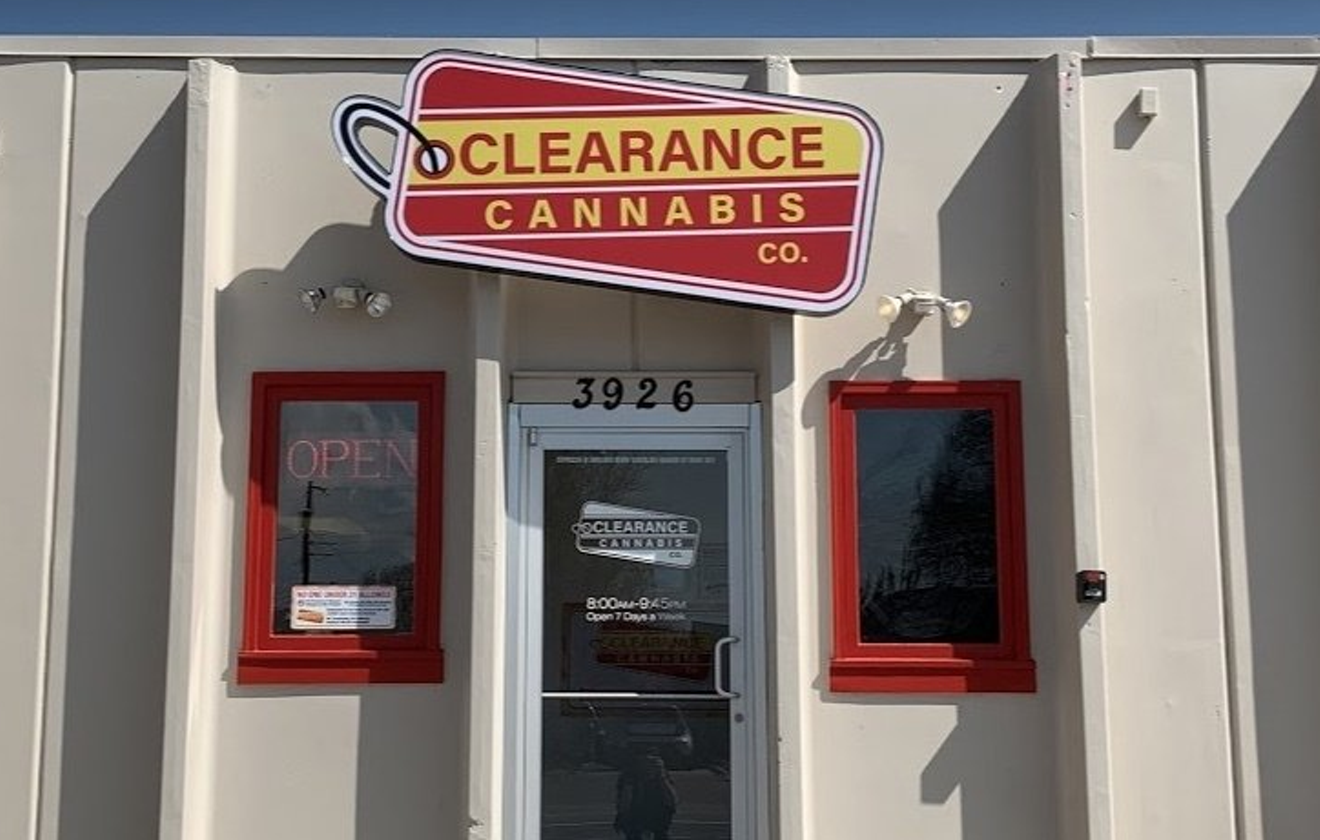 The Green Solution closed two retail outlet dispensaries, both of which were called Clearance Cannabis Company, as well as a store in Aspen. Courtesy of Columbia Care
The Green Solution, one of Colorado's largest dispensary chains, has closed three stores in Colorado.

In a public notice dated January 19, Columbia Care Inc., the publicly traded company that owns the Green Solution, announced a "number of initiatives to increase efficiency, decrease expenses and transition to cash flow positive," which included closing one store in California and three stores in Colorado, and cutting approximately one-quarter of its workforce.

Columbia Care owns over ninety dispensaries across eighteen states and jurisdictions, with twenty in Colorado. It owns the Green Solution, now a network of sixteen stores after the closures, as well as Medicine Man, another Colorado-founded dispensary chain with four stores in Colorado. According to Columbia Care, two of the closed dispensaries were Clearance Cannabis Company stores, a now-defunct chain of retail pot outlets in Englewood and Trinidad that were briefly operated by the Green Solution, as well as a Green Solution store in Aspen. Columbia Care growing operations in California, Colorado and Pennsylvania have been "consolidated," the company adds.

"As Columbia Care continues to grow and evolve, we constantly reassess our operations to objectively determine whether changes are required to drive the business forward. In light of unprecedented inflation and persistent economic headwinds, the current dislocation in the capital markets, and the political and regulatory structures that allow the illicit market to proliferate in some jurisdictions, we have made the decision to restructure targeted areas of our business. As a result, we have elected to proactively manage our operations to enhance profitability, competitiveness and overall success as a market leader in a hyper-dynamic environment," CEO Nicholas Vita says in a statement.

In 2022, Cresco Labs, a Chicago-based marijuana company, agreed to acquire Columbia Care in a $2 billion deal. That merger hasn't yet been completed yet.

"We continue to look forward to our merger with Cresco Labs and to providing updates as the transaction progresses, and as we deliver on our commitment to be one of the best companies in the sector," Vita adds.

Colorado's commercial marijuana industry didn't experience a dry spell until 2021, when both wholesale prices and dispensary sales started dropping after a record-breaking 2020. But last year was a full-on drought for the state's marijuana industry, with the average price per pound of flower falling nearly 62 percent, the lowest total ever recorded in Colorado.

The year-plus industry recession has led to a burst of marijuana business closures and takeovers across Colorado, with two large dispensary chains closing their doors over six-figure tax bills and several more agreeing to acquisition offers from out-of-state corporations.

Pot industry struggles aren't limited to Colorado, though, with dropping wholesale prices, consolidation and declining dispensary sales afflicting states with retail marijuana across the country. In Colorado, economic forecasts from the governor's office don't predict a rebound in marijuana industry revenue until 2024 or 2025.

Updated: This article was updated on January 23 to fix incorrect information from Columbia Care about the closed dispensary locations.  Columbia Care initially told Westword that the Green Solution in Sheridan, not Englewood, had closed.
KEEP WESTWORD FREE... Since we started Westword, it has been defined as the free, independent voice of Denver, and we'd like to keep it that way. With local media under siege, it's more important than ever for us to rally support behind funding our local journalism. You can help by participating in our "I Support" program, allowing us to keep offering readers access to our incisive coverage of local news, food and culture with no paywalls.
Make a one-time donation today for as little as $1.