Op Ed: In the End, Hickenlooper Tries to Wipe Out the Marijuana Industry 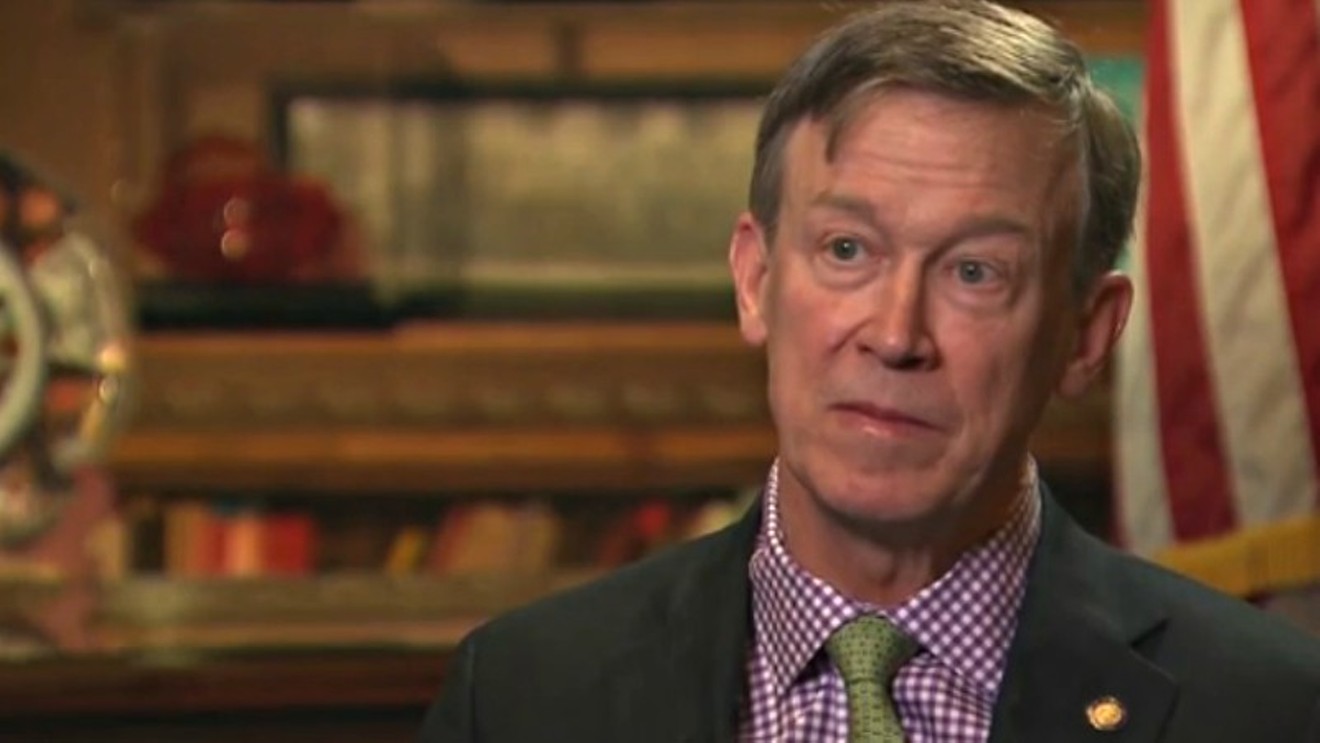 Governor John Hickenlooper during an interview from the CNN 420 piece. CNN
Wow. How far we have come in the almost six years since more people in Colorado voted for Amendment 64 than for President Barack Obama in 2012. Full circle does not seem to cover the current state of the marijuana industry since legalization occurred: Our governor wants to return to prohibitionist beliefs, as proven when he vetoed three major bills for the industry and patients.

Admittedly, I and many of my colleagues in the industry naively kept hoping over the years that the governor would come around to the benefits of the marijuana plant for consumers as well as the cannabis industry for jobs, economy and tourism. Even as the data rolled in with reports of less crime, fewer accidents, less teen use and even lower opioid abuse rates, we in the industry kept hoping that "Hick" was on board and had a change of heart about cannabis consumers and the industry that supports them. But we were all duped.

In the last week, the Democratic governor of our fantastic state has started looking and acting more like a Republican who still believes in prohibition. In fact, he is being passed by more prominent Republicans in Congress who are changing their mind about the plant that has helped millions of people in our state. Then there was the economic impact, which we all thought would definitely sway such a man as John Hickenlooper, a brewery-owning capitalist.

With over 40,000 jobs created in five years, billions in taxable revenue, the lowest unemployment rate in our state's history and even increased tourism, cannabis has proven time and time again that it is one of the most critical economic engines for Colorado. But as the governor vetoed first the tasting-room bill, then the autism-as-a-condition bill, a collective tension grew and grew from advocates, the industry and consumers. What was happening? How could such an amazing place as Colorado, the tip of the cannabis spear, be losing ground?

The final nail in the coffin came when Hickenlooper vetoed HB 1011, which would allow cannabis companies to take public money or go IPO, thus helping ease the federal burden of the horrific tax code (look up 280E) as well as banking issues, which still exist. It was at that moment that I realized this governor was actually never going to change his mind. Sadly, we had all been duped by the hope that he was a human who could understand the beauty of this industry and this plant.

So where are we? Well, cannabis companies are getting concerned, and so should consumers. This final veto will cause the illegal markets to soar while prices rise across the state. Diversion of overproduced cannabis will start to leave the state in record volume. And in the end, there will be one person to blame. The veto of HB 1011 could singlehandedly destroy the entire industry, because they can no longer afford a 100 percent tax burden from the feds. Without access to increased capital, the entire Colorado marijuana model — including 40,000-plus jobs, tax revenue, tourism, ancillary jobs in the space (construction, real estate, designers, marketing pros and on and on), which are another estimated 30,000 jobs — could all be lost.

Todd Mitchem takes on Governor Hickenlooper.
Courtesy of Todd Mitchem
Governor John Hickenlooper also sent a message to the over-60 percent of all Americans who want cannabis to be legal that he does not support marijuana in our nation. A sad day for all voters who feel that prohibition should end.

There is hope, however, which brings me to the current 2018 gubernatorial race. I started to look at the candidates as the 2018 primary ballot hit my mailbox. I discovered something shocking: There is only one candidate in the race currently who supports and has fought for legalized marijuana, and that is Jared Polis. Look, I am not a Democrat, but I have admired Jared as he has fought for our marijuana movement in Congress. Hell, I even ran for a congressional district seat briefly last year. Like him or not, regardless of your political affiliation, it's time to stop voting politics and perhaps vote person!

I ask all the other candidates to also tell us their positions on this critical topic. As a former co-founder and industry leader, as well as government affairs and public policy expert in the cannabis space, I will say that I believe a candidate cannot win as governor unless he or she firmly supports the marijuana space. While there is much race to go, so far we have yet to hear from any other candidate on the topic. If we Coloradans elect a governor who does not openly support the marijuana industry, consumers and growth, we will have ourselves to blame when the sector falters, people turn to dangerous prescription drugs, we lose tens of thousands in jobs and we lose billions in tax revenue.

But as marijuana companies struggle to recover from these devastating blows to progress brought on by our governor, I, for one, will fearlessly stand steadfast on the right side of history and proudly say that we cannabis consumers, workers and forward-thinking Independents, Democrats, Libertarians and Republicans will not allow people like John Hickenlooper to put out our movement. We will fight. We will work harder. We will win.

Put that in your pipe and smoke it.

Todd Mitchem is a government affairs and community outreach leader in the cannabis industry; you can reach him directly at [email protected] Respond to this piece by posting a comment or sending an email to [email protected]

Westword occasionally runs opinion pieces on matters of interest to residents of metro Denver. Have one you'd like to share? Email [email protected]
KEEP WESTWORD FREE... Since we started Westword, it has been defined as the free, independent voice of Denver, and we'd like to keep it that way. With local media under siege, it's more important than ever for us to rally support behind funding our local journalism. You can help by participating in our "I Support" program, allowing us to keep offering readers access to our incisive coverage of local news, food and culture with no paywalls.
Make a one-time donation today for as little as $1.