Wholesale marijuana prices have never been lower in Colorado, yet both WolfPac dispensaries in Denver are currently closed, with a sign posted outside the location at 2420 South Colorado Boulevard that reads, "Store Closed No Product."

The closed WolfPac dispensary at 74 Federal Boulevard also has a sign on the door, but that notice reads, "Closed today. We are sorry for the inconvenience." However, WolfPac's Denver stores have been closed for at least two weeks, if not longer, according to online customer reports.

The supply chain isn't the only obstacle that WolfPac has encountered in Denver. It's currently battling licensing discipline after 2022 inspections by the Denver Department of Excise & Licenses charged it with marijuana product tracking, storage and surveillance violations. Some of those violations were disputed by WolfPac, and a hearing took place on January 13. The city hearing officer has not yet issued any recommendations; once those are submitted, Excise & Licenses executive director Molly Duplechian will issue the terms of any potential punishment. 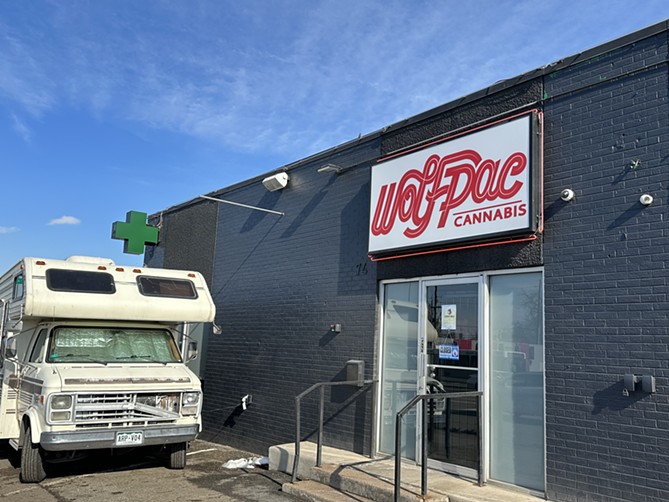 WolfPac's store at 74 Federal Boulevard is also closed.
Thomas Mitchell
WolfPac ownership did not respond to requests for comment on the recent closures, but founder and CEO Emanuel Bernal spoke to Westword in September about the city's allegations of violations.

"It’s sad to say that this happened, especially in the shape the industry is in now. Why are sales down 60 percent? How can they help us with that? We're operating on small margins, so any hiccup is hard to recover from," Bernal said. "I think they're doing the best they can. We were the first in the country to develop compliance, but I think there are a lot of things that can be fixed, whether it's taxes or something else."

Business compliance was the main topic of discussion during the city's public check-in with the local marijuana industry in December. According to inspectors with Excise & Licenses and the Denver Fire Department, a number of dispensaries still aren't following new rules that require at least one secure safe in their buildings for holding cash and marijuana products, as well as increased surveillance measures.

"Margins are extremely tight for the industry right now, and we are seeing a lot of closures and consolidation of facilities. Don’t hurt your compliance budget during the down period," DFD Lieutenant Matthew Kasson warned business owners during the meeting. "We definitely don’t want to see any reduction in the public trust that the industry has built up in regards to safety."

The storage rules, adopted in 2021 by Denver City Council and implemented in January, were enacted to decrease the rate of burglary attempts at marijuana businesses, according to Excise & Licenses and the Denver City Attorney's Office.
KEEP WESTWORD FREE... Since we started Westword, it has been defined as the free, independent voice of Denver, and we'd like to keep it that way. With local media under siege, it's more important than ever for us to rally support behind funding our local journalism. You can help by participating in our "I Support" program, allowing us to keep offering readers access to our incisive coverage of local news, food and culture with no paywalls.
Make a one-time donation today for as little as $1.