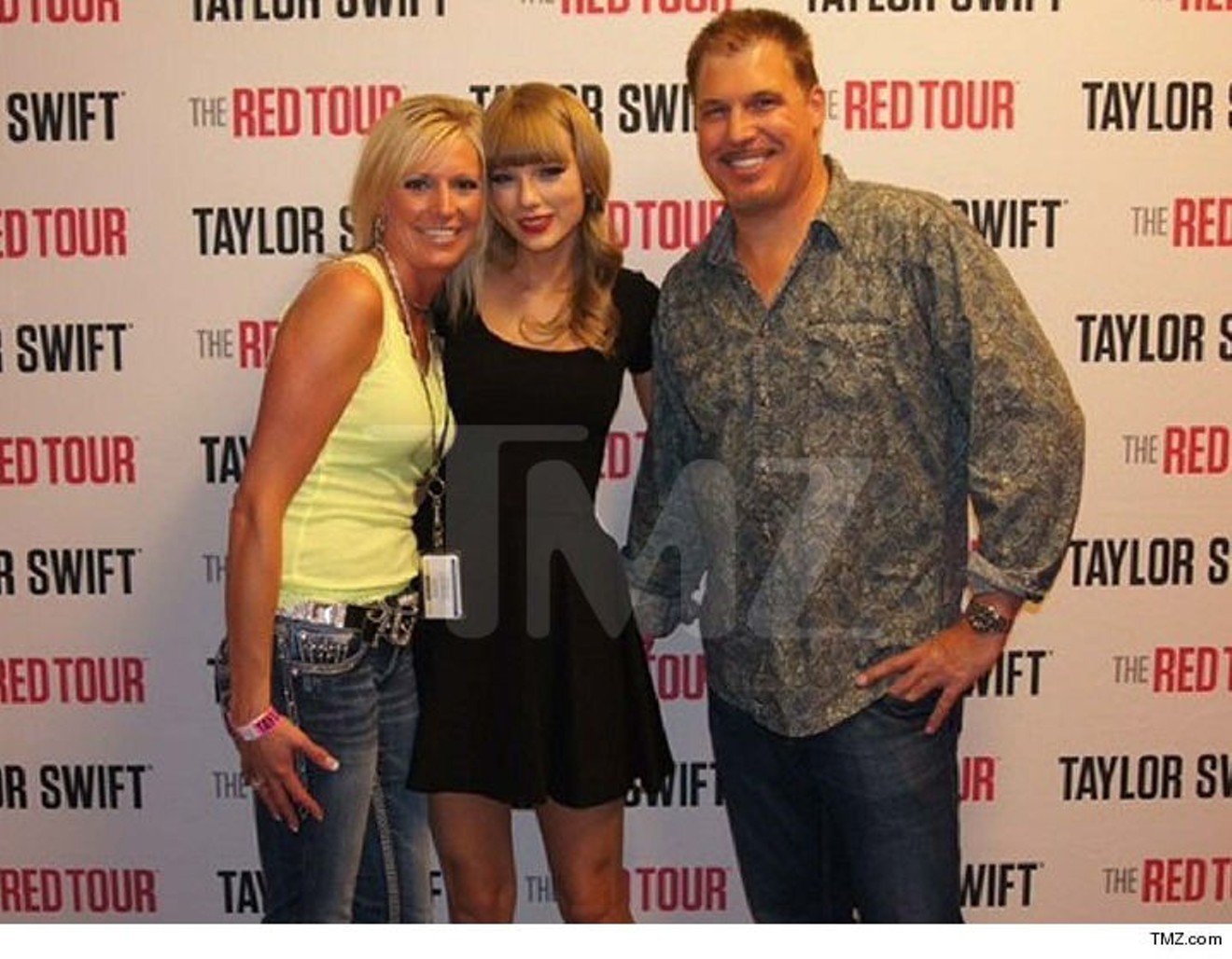 The alleged sexual assault photo featuring Taylor Swift, Denver DJ David Mueller, and his ex-girlfriend Shannon Melcher, that was obtained by TMZ. TMZ
Testimony began in Mueller v. Swift et. al, the largest celebrity trial that Denver has seen since Michael Jackson's plagiarism case in 1994, on August 8, after a protracted jury selection. In case you've somehow missed the coverage, the trial centers on former 98.5 KYGO DJ David Mueller (known on the air on his morning show as "Jackson") allegedly groping Taylor Swift's butt while posing for a photo before her 2013 Red Tour concert at the Pepsi Center. Mueller sued Swift, her mother, Andrea Swift, and Swift's radio coordinator, Frank Bell, for around $3 million in damages after he was fired from his job shortly after the incident, and Swift countersued for $1 for sexual assault.

In his opening statement, Swift's lawyer, J. Douglas Baldridge, offered this: "[Swift's] trying to tell people out there that you can say no when someone puts their hand on you."

When Mueller took the stand, he told the court that he was pursuing the case to clear his name after losing his career in radio, his "passion." "It's a humiliating experience to be accused of something that despicable," he said. After detailing his career history and his relationships with his boss, Eddie Haskell, and his girlfriend at the time, Shannon Melcher, who appears in the now-infamous photo of Mueller with Swift, Mueller recounted his experience at the Pepsi Center on June 2, 2013, and his subsequent firing, firmly denying any "inappropriate touching" or change in his story.

Testimony will continue today in the eighth-floor U.S. District Court courtroom in the Alfred A. Arraj Courthouse. Here are a few notes from the August 8 action:

The courtroom layout:
Swift, her mother and Bell were seated at a table in the center of the room, across from the jury box (six women and two men), while Mueller spoke from a corner of the room near the judge's bench. Four rows of seating were available for the public, Swift's entourage (including publicist Tree Paine), the media and members of the public (more on that later).

Swift's reactions:
For the majority of Mueller's testimony (during which he referred to her on a first-name basis), Swift watched him with a poker face, occasionally passing handwritten notes to her lawyers or her mother. One of her more pronounced reactions came when Mueller mentioned that he had deleted an audio recording of a meeting with his bosses regarding the incident, in order to record video at a John Mayer concert at Red Rocks. Swift raised her chin a little, looking exasperated. It's ironic that Mueller would mention Mayer, the ex about whom Swift penned "Dear John" (whose lyrics include "Don't you think nineteen's too young to be played by your dark twisted games?"). And her annoyance was evident when Mueller accused Swift's security of being disrespectful and dismissive to Melcher, and especially when he rationalized his deposition description of Swift as "cold and standoffish" by pointing out that she hadn't invited him into the picture with his girlfriend.

John Mayer plays at Red Rocks (however, this photo dates to 2010, not the 2013 concert Mueller would have attended).
Westword Photographer
The fans and other attendees:
In an email to the press, Court Clerk Jeff Colwell noted that there were fewer fans in attendance than he had expected. But the fans who were there were dedicated. Friends Dani Kuta, seventeen, and Grace Jarecke, sixteen, had arrived pre-dawn to queue on the sidewalk. Kuta said she remembered the 2013 concert where Mueller met Swift; she'd written lyrics down her arm and dressed as a star, a play on the title of one of Swift's songs, "Starlight." Both Kuta and Jarecke said they were there to support Swift; they wanted to "see somebody with the platform that she has to speak out about an issue that's been going on for long," said Jarecke, while Kuta echoed how important it was to her and her friends to stand up against non-consensual contact. Other fans who lined the benches included a shaggy-haired man wearing an Anvil T-shirt and black wristbands who was there for the legal drama; a Seattle father who had driven his ten-year-old daughter, an avid fan, from their extended family's Monument home for a celebrity-studded civics lesson; and former lawyer Bruce Comant, who predicted, "I'm thinking he loses."

The fashion plate:
Swift looked demure, wearing a long-sleeved black shirtdress with plaid trim, sheer black tights, needle-thin heels and red lip. Her only visible jewelry was a silver ring, and she had swept her hair (back to dirty blond, not the bleached platinum it was earlier this year) into a low bun.

Taylor Swift playing the first of two sold-out shows at the Pepsi Center on her most recent tour for the album 1989.
Miles Chrisinger
Lawyer J. Douglas Baldridge:
Swift's D.C.-based lawyer took an aggressive approach to the trial, slinging the word "sir" in the cross-examination with the animosity of the first Montague-Capulet confrontation in Romeo and Juliet. He frequently challenged Mueller's statements by referring him back to his deposition testimony, rereading sections verbatim and then asking, "Did I read that correctly?" One of the most pointed moments of the cross-examination came after Mueller described an anecdote that Haskell, his boss, had told him about grabbing Swift's butt as "like a fishing tale...he tended to brag, and he would tell silly stories." Baldridge asked, "Do you consider a sexual assault to be something that you would describe as silly?"

Baldridge stressed the absence of evidence from Mueller's various broken electronic devices, as well as his prior conflict with Haskell (a self-described "vindictive" person, per Mueller) and his relegation to the public, not media, photo-booth line at that 2013 concert that made him feel ignored by Swift.

Mueller's cross-examination will continue this morning, and the trial is expected to last nine days.