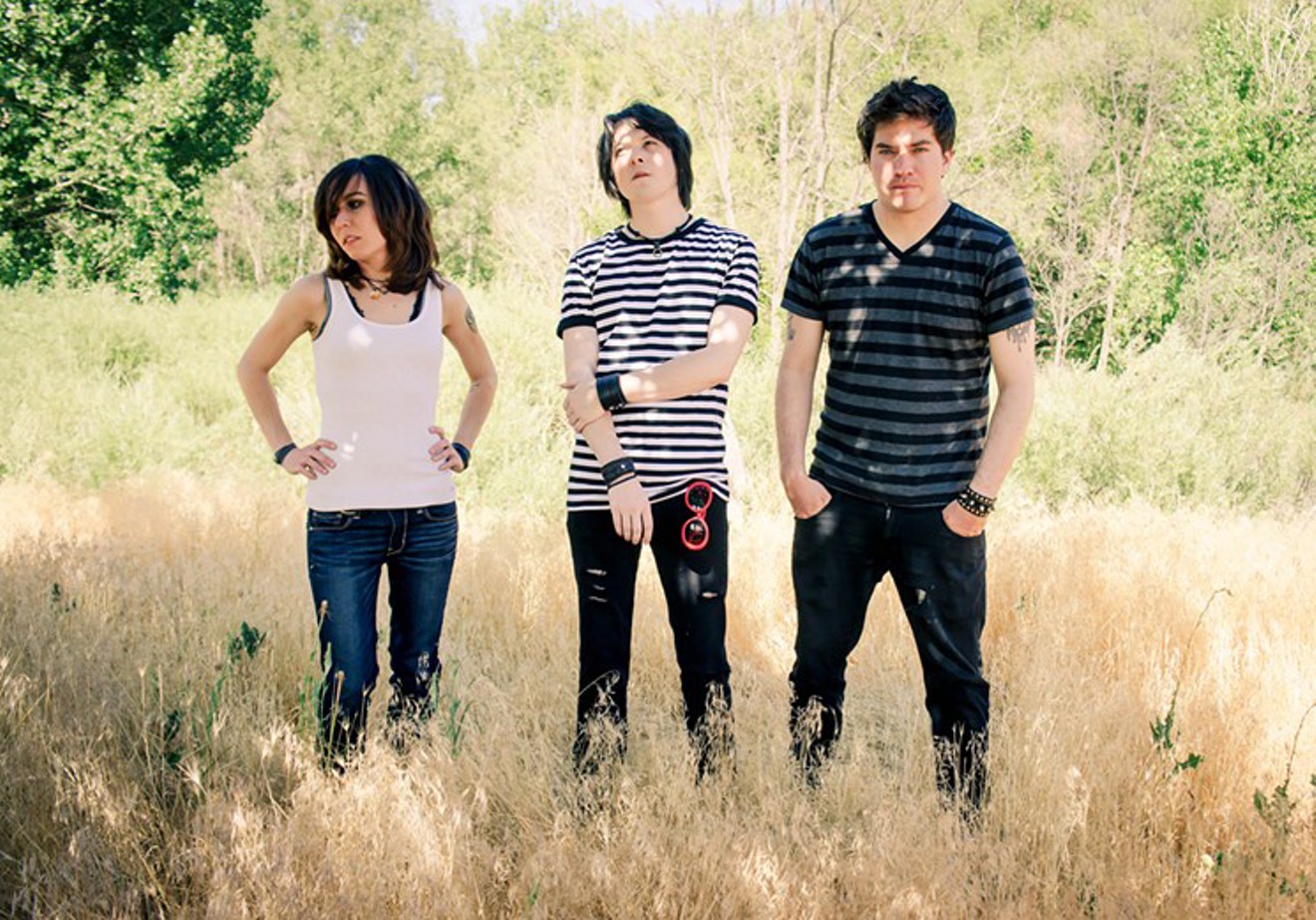 Local band Television Generation channels frustration into lo-fi rock. Courtesy of the band
Denver band Television Generation has familiar gripes: Rent is too high here, DIY spaces are being destroyed by regulatory scrutiny, and Donald Trump’s presidency is making everything worse. The mission of these indie rockers is not simply to survive the precarious times, however, but to channel their frustration into music — and that’s exactly what they’ve done on their latest EP, Peel.

“The whole album has a vibe that was influenced by the things that have been happening in the past year,” says frontman Will Hayden. “It’s kind of felt like this big falling-into-despair kind of thing.”

Hayden expresses that despair in a tone that only marginally rises above his heavy guitar riffs, while Katy Johnson holds it together on the bass and Anthony Elio fills the rest of the sonic space with rollicking drums.

Hayden’s nihilistic tendencies pervade the EP’s songs, beginning with the aptly titled “Whatever.” But just because his lyrics and tone are stridently apathetic doesn’t mean there isn’t emotion layered within the music.

Songwriting “is always kind of embarrassing,” admits Hayden. “It shouldn’t be, when you’re an artist. You should throw your emotions out there, but I’ve never really been a person like that. So the emotion is definitely there, but there’s this mask.”

His songwriting is heavily influenced by the places where he’s lived. He grew up in the small town of La Junta in southeastern Colorado, which didn’t exactly have a thriving music scene.

“My first musical memory was when my dad bought a Beatles anthology for my mom for Christmas,” remembers Hayden. “My brother and I were obsessed with their whole discography. We listened to the Beatles front to back.”

Hayden quickly transitioned into a classic-rock phase, then punk, then indie rock, then grunge. The lack of a music scene didn’t deter him.

“My high school band actually used to practice in a barn,” he says. “It wasn’t a little red barn; it was more of a commercial barn kind of thing.”

A tattoo parlor soon moved to town, and Hayden started going to the occasional live performance there. He left La Junta to attend the University of Colorado Boulder, where he met Johnson and Elio, a Denver native.

Before starting Television Generation, Hayden picked up the acoustic guitar and went through a brief singer-songwriter phase.

“I loved doing the singer-songwritery kind of thing, but I really missed the energy — the pure, dirty-ass rock-band vibe,” he says. “I missed jumping around and getting all of my energy out.”
After graduating, he moved to Denver, hoping to continue to play music. It wasn’t quite everything he’d dreamed of.

“I came up from a little farming town where life was pretty easy. Here the cost of living is constantly skyrocketing, and I just got tired of what I have to do every day to barely survive. All my time and money was going to rent — which just kept going up — and health insurance that I couldn’t really afford to use. That made it difficult to do what I enjoyed doing: writing and recording music.”

Still, Hayden managed to scrape by. He and Johnson work day jobs in administrative data-entry positions. Elio, the most jubilant of the trio, is an editor for a local tech magazine. He was also the one who came up with the group’s name.

“I really wish that I’d had some really cool, interesting moment where inspiration struck me and I was like, ‘Yeah, we’re a generation raised on television’ — but I was really just washing dishes at my job,” he recalls. “I figured out that ‘television generation’ kind of rhymes, so I just went with that.”

While Hayden’s pessimism rings through his songs, his bandmates’ main motivation for playing in the group has everything to do with pleasure. Elio says he just likes to “drink a lot and go on stage and hit the drums,” and Johnson enjoys the group’s chemistry.

“I just like how we all mesh together,” she says. “We all have the same tastes in music. Anthony’s more on the punk side, and Will listens to a lot of classic rock, but our tastes overlap. When we get together, it just feels right. I’ve never had so much fun playing music.”

As for the band’s influences, Hayden cites artists like Car Seat Headrest, Courtney Barnett and Cage the Elephant. He’s especially drawn to the artistry of indie rockers.

“Rock has been kind of stagnant for a while,” he says. “Hearing Car Seat Headrest on the radio was just like, ‘Wow, someone is doing the same kind of things that I do.’ He’s just playing guitar and singing, but he’s not a guy with an ego. I don’t like the whole rock-and-roll, ‘Look-at-me-I’m-a-douchebag,’ super-confident buff guys. I’m more into the people who are a little more on the artsy side.”

Peel also draws from the bandmates’ love of the Velvet Underground. Hayden is a huge Lou Reed fan; Johnson particularly likes Nico. Album artist Bizaroïds played with these influences in a remix of the Velvet Underground’s iconic banana logo (originally created by Andy Warhol). The Bizaroïds version is a partially peeled banana, with each part of the peel representing a member of Television Generation. The EP was a long time coming, partly because of Hayden’s songwriting process.

“There are a lot of things that I’ve had for years that haven’t been completed. I’ll come up with something one day and finish it up. That was actually the case with ‘Going Blank Again,’” Hayden explains. “I had the riff and this little line for five years. This past year, I found something to complete it with. That was in part due to all the shittiness that’s been happening with Donald Trump and all that.”

Similarly, he addresses gentrification and the local housing crisis in the angst-ridden “I’d Kill Myself but I Have to Go to Work Tomorrow.”

“It’s kind of hard not to be influenced by what’s going on in the city with the DIY spaces being closed down. There was a big witch hunt,” Hayden says. “All that is pretty well linked to gentrification.”

Songwriting has not been Hayden’s only response to topical issues; he’s also participated in benefit concerts that directly address issues such as the housing crisis. He believes that local social action is what really has the power to enact change.

Ultimately, though, he doesn’t feel that Peel is a completely depressing album. For instance, he describes “Thirteen” as a “funny look back on the emotional teenagers that we used to be — the hopeless romantic emo kids.” And he manages to find hope in the rest of the music.

“There’s hope within the shittiness, I guess,” he muses. “I like to look at the bright side of nihilism, like nothing matters: ‘So, hey, enjoy the ride. Tap your feet, enjoy the beat, we’re all gonna die’ — that kind of thing.”