iZCALLi Is Building Bridges With Rock 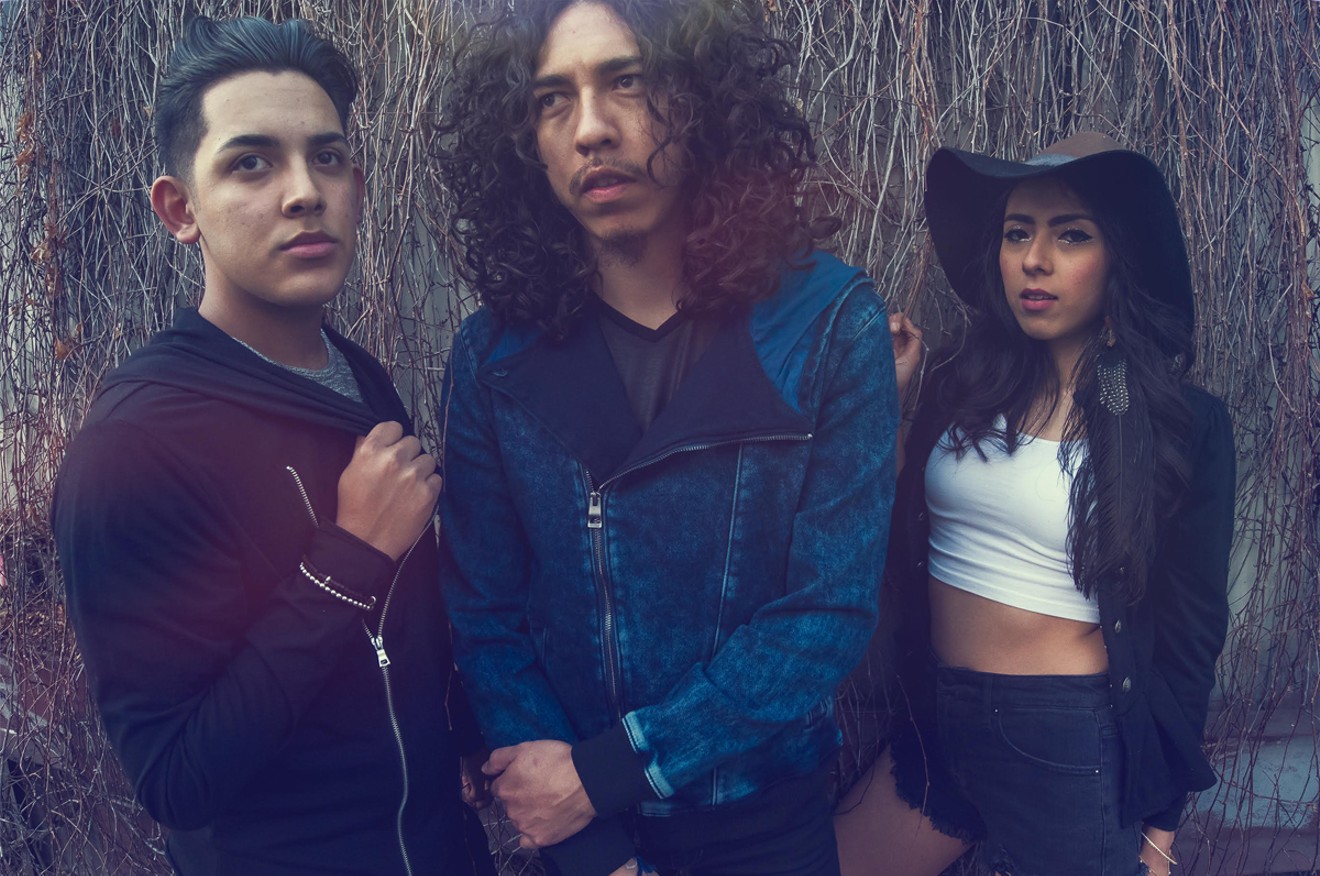 IZCALLi’s fourth album drops on January 6. Andrew Rios
Some bands are defined not by the type of music they play, but by the language they sing. This is the case with iZCALLi.

Singer/guitarist Miguel Avina and his family moved to Colorado from Mexico City in 1992, when he was ten; here he learned English and was influenced by United States rock bands like Green Day, the White Stripes and the Strokes. But when he formed iZCALLi in 2005, he decided to sing exclusively in Spanish. He had grown up playing music with his father and wanted to pay homage to his Mexican upbringing and remain loyal to his culture.

Despite a broad range of sound, the decision to be a Spanish-language band pigeonholed iZCALLi into Denver’s Latin-music scene, making it hard for the group to find wider acceptance among Anglo rock fans.
The band — fleshed out by Miguel’s sister, Brenda Avina, on bass and Luiggy Ramirez on drums — is set to release its fourth album, iZCALLi IV, on January 5. This will be its first completely bilingual record, with half the songs sung in English and half in Spanish. The project is an attempt to reach a wider fan base.

“We were just fitting in with what people expected of us,” Avina says. “We called ourselves ‘the Spanish rock band.’ Now we’ve decided to jump out of that label and just be a Denver band.”

In recent years, iZCALLi has had a strong presence in Denver’s rock clubs as well as at the Westword Music Showcase and the Underground Music Showcase, and the strategy of building new audiences that might not gravitate toward Latin music is working.

When Avina started iZCALLi as a three-piece acoustic project, the clubs on South Broadway and Colfax seemed miles away from the venues where they were performing.

“We’d play in a lot of Mexican restaurants back then,” recalls Avina. “We’d show up and start setting up when people were still eating. We’d clear out all the tables and chairs and bring our own P.A. The owners of those restaurants always acted like they were doing us a favor by letting us play, but we were doing everything. It was hard work, but I got that work ethic from my parents. They instilled that in us and made us realize you have to work through things extra hard in order to accomplish even the bare minimum.”
While there was no shortage of restaurant gigs, the experience left Avina unfulfilled; he knew that in order for his band to reach a receptive audience, iZCALLi needed to play proper clubs with other bands.

Early in 2006, Avina noticed that the Spanish singer BEBE was going to play the Gothic Theatre. While her music is not exactly in line with what iZCALLi was doing, since they both sang in Spanish, Avina saw it as an opportunity, wondering if their shared language would be enough to convince the promoter, Nobody in Particular Presents, to have iZCALLI open. Turns out it was.

“I found out where the office was, knocked on the door, and asked if we could open the show,” he says. “They asked if I had a demo, and we put it on for about two seconds before they said, ‘Well, you’re singing in Spanish, so I guess you’re going to play.’”

Knocking on a major promoter’s door ended up being an important step for the band. After that show, iZCALLi began receiving offers to open for other well-known Spanish-speaking acts.

In hindsight, Avina wonders if the band was ready.

“We had a string of shows where we were opening for these giant bands coming from Spain or Mexico,” he says. “We weren’t very experienced, and it made us grow really fast. That affected the change in how we sound. We started playing shows at these huge venues and playing acoustic sets that weren’t working. People needed more engagement from us.”

At the time, iZCALLi was a trio, with Avina on acoustic guitar and dual hand-percussionists Luis Galaviz and Raul Chavelas. Eventually, Avina decided to trade his acoustic guitar for an electric one and switch Galaviz from a djembe to a full drum kit. He parted ways with Chavelas and recruited a bass player. In October 2006, one week before a show with Chilean act Lucybell, the bass player quit, leaving Avina scrambling for a replacement. With no better option, he recruited his sister to play bass for the show, even though she had never picked up the instrument before. He essentially taught her to play in one week.

Brenda Avina
Miles Chrisinger
“That was pretty scary,” Brenda says. “We practiced so much that I had blisters on my fingers.”

The premiere of iZCALLi as a fully formed rock band was an auspicious shift for the group. As Brenda continued to hone her musical skills, the band was becoming more capable of playing in front of large audiences and performing with bands of all genres. Avina’s goal was to find ways to showcase his band’s new sound and slowly break away from performing only with Spanish-speaking acts.

“That’s around the time we started venturing into what we called ‘the American scene,’” Avina says. “Bands like all capitals and the Photo Atlas saw us play and started bringing us on to their shows and introducing us to other bands. It was our first time playing clubs like the hi-dive or Old Curtis Street Tavern, places that we didn’t even know about before.”

As iZCALLi continued to immerse itself in that scene, the musicians began to find new Anglo audiences that didn’t necessarily speak Spanish. This was new for Avina, and he began to wonder if his Spanish lyrics alienated potential fans.

“People started to come up to me and say, ‘I really like your music. I just wish I understood what you’re saying,’” Avina says. “I started to feel like maybe there were connections to be made that I was missing. I wanted to give people an opportunity to fully share in what we were saying.”

III, from 2015, included Avina singing a few songs in English for the first time on a recording, and the overall sound was more hard rock and alternative than on previous albums. Shortly after III’s release, drummer Victor Jimenez left the group, frustrated with the act’s new direction. Wanting to find a dedicated drummer, Avina thought about Ramirez, whom he had met years earlier at a meet-and-greet for Mexican band Maná. Only twelve years old at the time, Ramirez made an impression on Avina and proved his enthusiasm for music.

“When Maná came in, I just started crying immediately because I was so excited,” Ramirez says, remembering the show where he and Avina had met. “Miguel came over and told me it was going to be okay.”

Both musicians were there because they had entered a contest to meet and play on stage with Maná, and both submitted videos of themselves playing their respective instruments. While neither of them ultimately got to play with the band, Avina had seen Ramirez’s video and knew he had talent. While he was too young to play in the band, Avina gave him encouragement and kept in touch with him. Years later, after Jimenez left, Avina called the seventeen-year-old drummer to help record iZCALLi’s new album.

On the eve of releasing its new album, iZCALLi is still morphing into the band its members want to be in. The group recently added trumpeter Wes Watkins, violinist Josh Lee and saxophonist David Maynez to lives shows, ensuring that their sound is even larger and their performances more engaging.

Still, there are times when Avina and others do not know where they best fit in.

“There are some people that have no idea what to do with us,” Avina says. “We’ve just come to the realization that an agent or a manager might not know the Spanish market, but they also might not think we fit into the English market. I feel we’ve proven that we can play with anybody, no matter what language and no matter what style, and just be able to mesh with their crowds.”

While the band may have a tough time fitting perfectly into one particular scene or genre, Avina maintains that these disparities can be used as catalysts to help all of us learn more about each other.

“One of our goals is to merge cultures and bring people together,” he says. “We grew up in Mexico and know what it’s like growing up there, but we also have the luxury of living here. We know what it’s like to experience both of those things, and I think everybody should be privy to that. If we can show that through music, I think that’s the best.”