Whip It: Want to Explore a Fetish? Party at the KINK Ball

KINK takes over the Exdo Event Center on Friday, June 11. Jay Berino
“I don’t know what it is about Denver, but a lot of people in Denver have a fetish,” says DJ AJ Ritual of Ritual Noize Entertainment, one of the organizers of the KINK annual fetish ball, set for Friday, June 11.

The best thing about the event, according to Ru Fio Jimenez of RU Entertainment, Ritual’s co-organizer, is that it's friendly to seasoned pros (so friendly that a few will be leading workshops) as well as those who are just getting started in the lifestyle and looking to learn...and party.

Ritual and Jimenez, icons of the Denver goth scene, spent years throwing other kinky events, from vampire parties to gas masquerades, before they decided to expand their focus. “We’ve been doing fetish events for a long time, but we’d focus more on one fetish, like a gas mask or spanking or whatever,” explains Ritual. "It was like, why don't we just do a whole fetish ball to encompass everything about fetish?”

Jimenez, who is booking the fetish performances, says the event will be as educational as it will be fun. “I really harness on bringing true leaders of the kink community who can give people that have never experienced a kink...and they connect for those types of kinks and learn more about themselves and also get a tasting," he says. "Anything from flogging to waxing to shibari [an ancient form of Japanese rope bondage]. There'll be tastings all throughout the venue."

And that's not all.

“Every 45 minutes, I'm going to have a different type of performance illustrating that type of kink,” Jimenez continues. “With the tastings, I'll have an illustration of the history of the kink or fetish, where it came from. It brings more of an education aspect — not only to the club lifestyle, but also for people who have never experienced that. They can go dance and have fun, but they can have some tasting.”

Denver has become a kink hub in the Mountain West. Before COVID, there were multiple dungeons where pro doms worked; some, like the Sanctuary, appear to have survived the pandemic, though they are far behind in rent. Others shut down for good, and former leaders in the scene moved on to other cities.

But Denver still has a strong community where people support each other across sexualities, subcultures and fetishes, Jimenez says. “You can talk about all the subcultures. I think Denver, as a city...the communities are more connected than in other cities, even in the gay culture. I feel like if somebody passes away, everybody comes together. There's a strong, tight-knit community that cares about each other. So if it's in the goth community, or if it's even in the fetish-kink lifestyle, I think people are connected.” 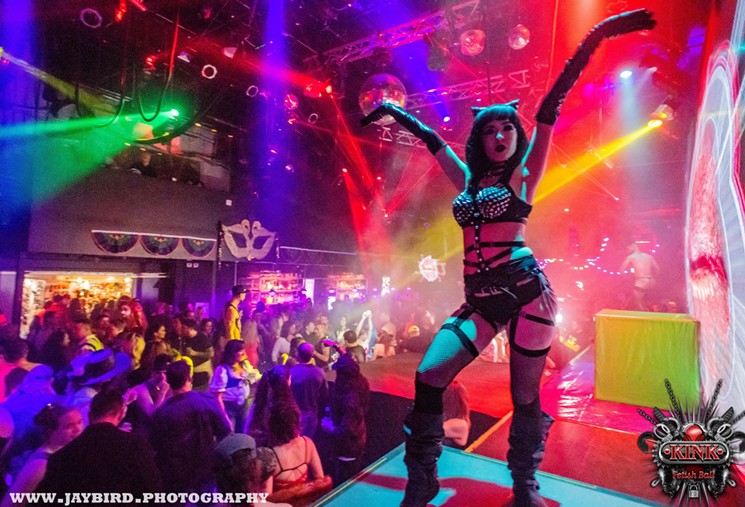 KINK includes play for people of all interests.
Jay Berino
From furries, foxes and pups to spankers, spankees and those looking to be drenched in wax, all will have room to play at KINK. And when those subcultures unite, the Denver fetish scene thrives, say the event's organizers.

“Denver definitely has a lot more to offer than other cities, but also on the aspect of community, I think people are more accepting,” Jimenez explains. “We're like a melting pot. We have people from east, west, north and south all moving here for a reason. And it's not just to smoke weed. We have a good economy and a good subculture of different people from all walks of life.”

KINK organizers hope that the ball will help create a gateway for more of those people to enter the community, become involved in the scene, and dance. It's open to everyone — queer, straight, whatever — and will be set up so that everyone feels welcome and comfortable.

“I always tell people: This is all walks of life,” says Ritual. “We literally want to cater to everybody. We want to create a safe space for everyone to express themselves.”

The first ball drew 65 percent women and 35 percent men. Ritual attributes those percentages to how many women feel more comfortable in a gay bar than in a straight space.

"We have consent forms, basically, in a way that if somebody’s going to get a tasting, they have to sign a consent form,” says Jimenez. “It's kind of like a liability waiver that they're not drinking, that they're not intoxicated when they do these tastings. A lot of these leaders, they take this very, very seriously, and I do, as well.”

No matter what a person's interests are, one of the ball's highlights will be the music and how it gets people moving on the dance floor. Unlike other fetish events that are strictly educational and focused on workshops, this will be more of a rave.

“My biggest fetish is probably music,” explains Ritual. “And I think mixing that whole electronic dance music with the kink element makes for a really fun fucking night. Again, it's another place where people can dress up any way they want and just have a good time and express who they are.”

KINK starts at 9 p.m. on Friday, June 11, at Exdo Event Center, 1399 35th Street. For tickets, $20 plus fees, and more information, go to the Ritual Noize website.
KEEP WESTWORD FREE... Since we started Westword, it has been defined as the free, independent voice of Denver, and we'd like to keep it that way. With local media under siege, it's more important than ever for us to rally support behind funding our local journalism. You can help by participating in our "I Support" program, allowing us to keep offering readers access to our incisive coverage of local news, food and culture with no paywalls.
Make a one-time donation today for as little as $1.