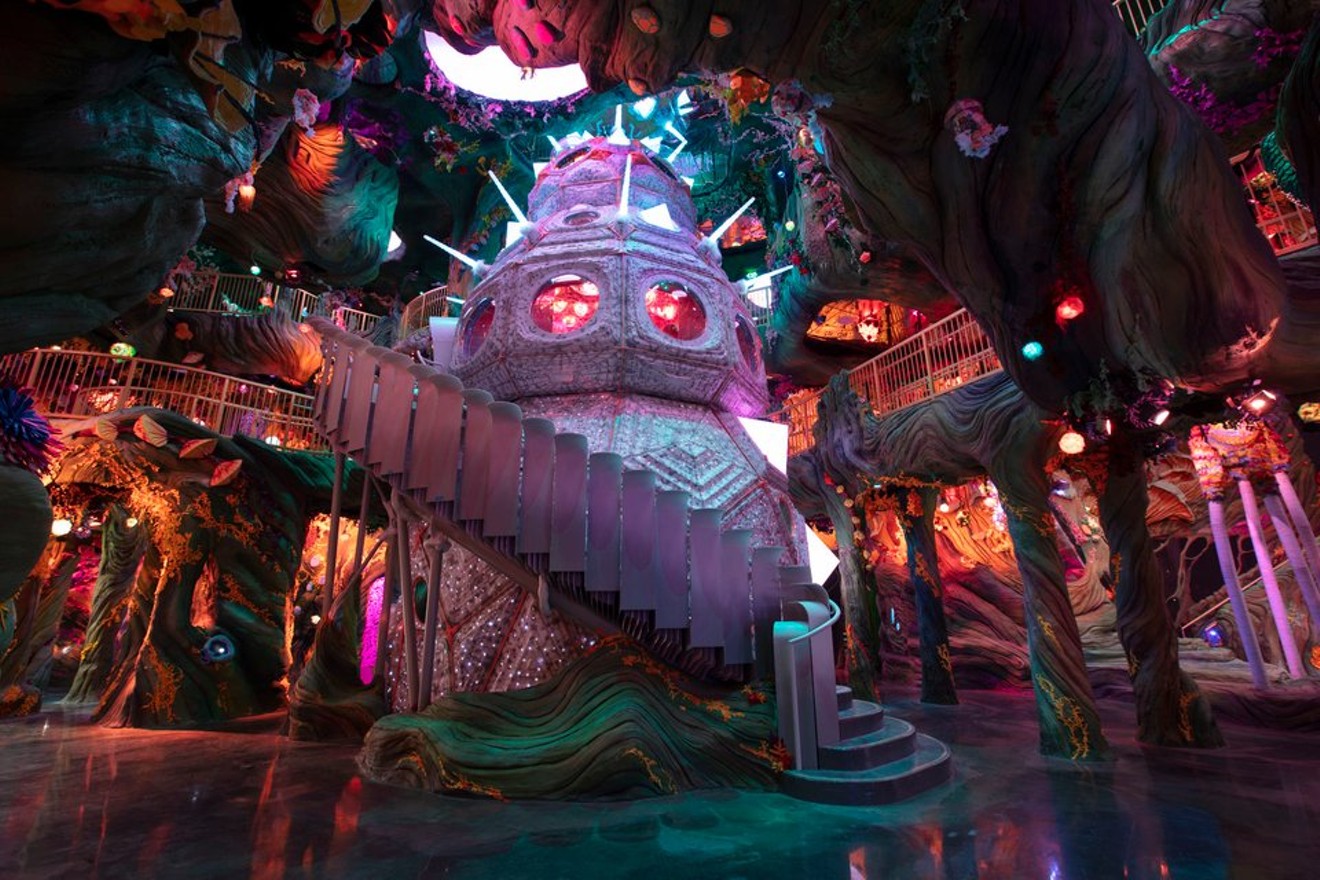 You'll be able to dance through Meow Wolf's Cosmohedron in Numina. Kate Russell
Meow Wolf Denver has been taking visitors' suggestions to heart. After some complained about too many children running through Convergence Station, it created Adulti-Verse: twice-a-month kid-free nights that have been so successful they've been extended through April. And now Meow Wolf has responded to requests for more immersive concerts by introducing the Party Portal, a series of shows that will take place throughout the facility, offered in partnership with Live Nation.

Concerts at Meow Wolf had been confined to the first-floor Perplexiplex venue, which is next hosting Nashville producer sub-ID on Saturday, January 29. "We've been listening to input from our visitors," says public relations manager Erin Barnes. "We passed on laser tag, but people kept saying how cool it would be to see your favorite band or favorite DJ actually perform in these immersive spaces."

"The DJs were booked with Live Nation," Barnes says. "Eric Pirritt [president of Live Nation Colorado] totally understands our vibe and what we're going for, so he was trying to choose a diverse selection of artists from all over who aren't necessarily an obvious choice but are rising stars."

In a statement, Piritt says that Live Nation is "honored" to team up with Meow Wolf. “Between Meow Wolf’s creative exploration and our premier production and booking, we are going to be promoting some really unique events for artists and fans in Denver," he notes.

The Meow Wolf team is still testing acoustics to figure out where DJ booths will be placed in its various worlds, Barnes says. And she hints that there may be specialty cocktails in addition to beer and wine that are sourced from local vendors.

"We have several Party Portals that we're planning," she adds. "Any of the immersive, in-world events where we have activation of the entire exhibition is going to be under the Party Portal name."

Meow Wolf is also planning more Adulti-Verse nights. The original lineup called for two in January and two in February (the next is slated for Wednesday, February 2), and now four more events have been added: two each in March and April. Given the success of Adulti-Verse, more could be added in future months. "There will be a few surprises, too, that make our adult nights a little more special," Barnes says.

She anticipates that the Party Portal will be another hit for Meow Wolf — and its fans. "It's so exciting," she concludes. "The music adds a new dimension to the experience."

Danceportation, midnight to 4 a.m. Saturday, February 26, at Meow Wolf, 1338 First Street; tickets are $85.
KEEP WESTWORD FREE... Since we started Westword, it has been defined as the free, independent voice of Denver, and we'd like to keep it that way. With local media under siege, it's more important than ever for us to rally support behind funding our local journalism. You can help by participating in our "I Support" program, allowing us to keep offering readers access to our incisive coverage of local news, food and culture with no paywalls.
Make a one-time donation today for as little as $1.
Emily Ferguson is Westword's Culture Editor, covering Denver's flourishing arts and music scene. Before landing this position, she worked as an editor at local and national political publications and held some odd jobs suited to her odd personality, including selling grilled cheese sandwiches at music festivals and performing with fire. Emily also writes on the arts for the Wall Street Journal and is an oil painter in her free time.
Contact: Emily Ferguson