Review: Muse Tried to Warn Us 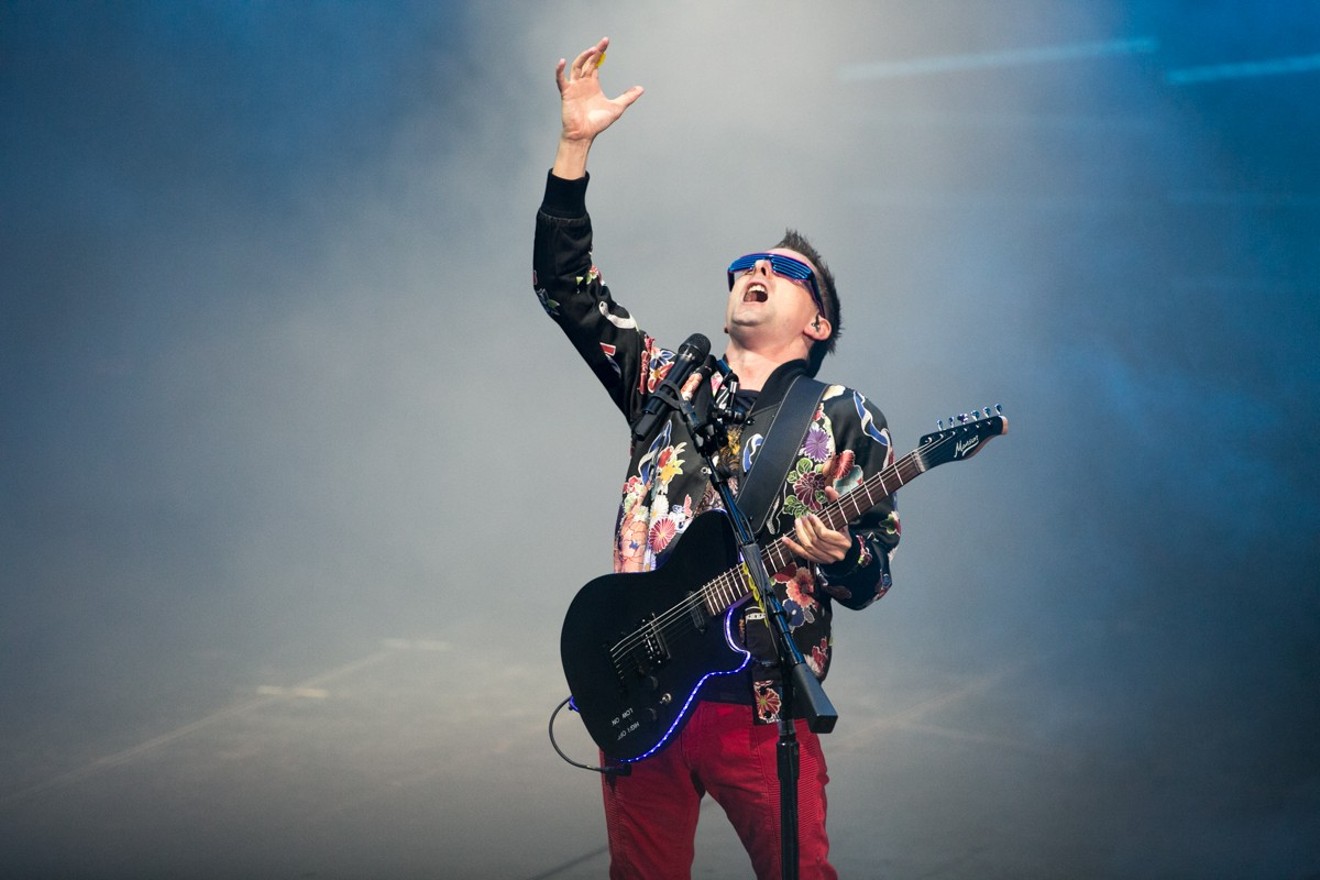 Muse has been predicting a political unraveling for a decade. Brandon Marshall
When Muse came to Red Rockson Monday, September 18, we expected a rock-and-roll spectacle, and the band offered a dazzling futuristic display. But were the British rockers also blaming us Americans for the current social and political turmoil in which Nazis drive cars into crowds of protesters, police gun down civilians and refugees are forced to return to war-ravaged countries?

This political moment, after all, is the dystopian future Muse warned us about long before Donald Trump took the White House. And at the Red Rocks show, the band’s catalogue of hits spanning more than ten years resonated eerily.

Muse opened with "Dig Down," the act’s latest single, which takes an obvious jab at Trump: "When God looks the other way/And a clown takes the throne/We must find a way." Instead of pointing fingers and blaming specific political groups for the clown’s ascension, the trio harmonized in a slow, futuristic-gospel-style, chanting: "Dig down, dig down, dig down and find faith."

The musicians rarely spoke to the crowd, letting their inspirational, almost anarchist songs do the talking. Lyrics written years ago now seem like they were prophetic, predicting that the United States was headed toward political upheaval. Songs such as "Madness" and "Resistance" speak louder than ever now in a country where political gatherings too often turn violent.

After announcing that Monday night's show was ten years to the day from Muse’s first Red Rocks concert, the musicians went into "Take a Bow," which they debuted at the venue a decade ago. The lines "And our freedom's consuming itself/What we've become is contrary to what we want/Take a bow" reverberated against the rocks before singer and lead guitarist Matt Bellamy sang, "You'll burn in hell," five times in the final verse.

Perhaps singing "burn in hell" more than once is a blunt way to chastise a misogynist leader who has struggled to condemn Nazis. Repetition, after all, is the language of the president, who can’t stop praising himself again and again and pushing his supporters to chant "Build a wall" ad nauseam.

At one point in the concert, Bellamy walked behind moving screens to don a pair of light-up sneakers and lit shutter shades, a look that harked back to 2007, when Kanye West was wearing shutter shades as "Stronger" topped the charts. Intentional or not, Bellamy’s glasses reminded the audience that Muse’s hits come from a time before we spiraled into chaos – even if the songs echo louder today.

Muse's Matt Bellamy.
Brandon Marshall
Muse dropped all subtleties for the encore, jumping into "Uprising," a call to arms in the fight against oppression. Fans chanted "Hey,” repeatedly throwing their fists into the air.

As the song played, the moving screens behind the band showed a violent clash. Black-clad riot cops faced off with a group of a Black Bloc anarchists, some wearing keffiyehs over their faces. As the crowd at Red Rocks continued to chant and raise their fists, the anarchists on the screen fought off tear-gas guns while throwing bricks and swinging baseball bats at riot cops’ shields. Bellamy played a heavily distorted guitar solo as the battle turned into a firefight. After the raucous song, a single black figure on the screen fired a pistol in slow motion.

Through the visuals backing "Uprising" and numerous allusions to anarchism, the band prompted audience members to take action, to struggle for systemic change beyond the concert, with just as much energy as they devoted to head-banging and fist-pumping. Muse's lyrics didn’t just reflect the current political moment but were an inspiration to fans who had listened to the trio’s albums of political frustration for over a decade to join the fight for justice.

Muse ended the night with its epic "Knights of Cydonia." After minutes building to an incredible guitar solo and throwing the crowd into a fit of head-banging, the band wailed the final verse, ending the show with the phrase "You and I must fight for our rights. You and I must fight to survive."