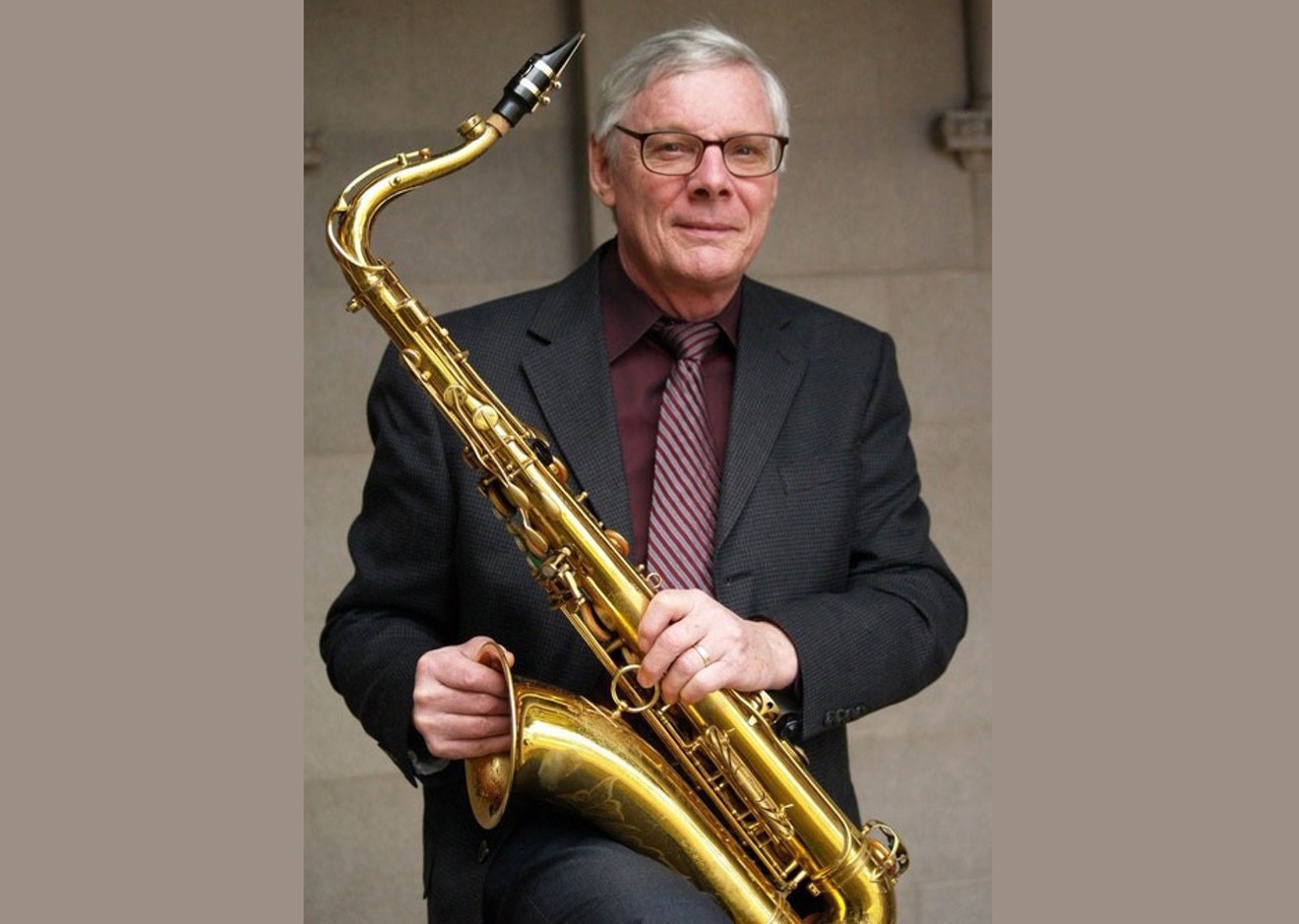 Denver’s music scene is mourning late jazz master Fred Hess. Charla Bevin
Fred Hess, who died on October 27 at the age of 74, used to tell his music theory and composition students that he could lie in bed and see his whole life in front of him: the books he’d read and written, and his tenor saxophone, which he’d been mastering for the better part of his life, playing avant-garde and straight-ahead jazz.

Trumpeter Joshua Trinidad, who studied with Hess at what was then Metropolitan State College from 2003 to 2005 and was in the big band that Hess led there, recalls his teacher saying, “I could just lie there, and I could see it all on my wall.”

Trinidad later helped Hess move from his tiny carriage house, and when he first walked in, he saw exactly what his teacher had been talking about. “He was very much centered around music,” Trinidad says. “There was a barber chair he used to practice in, and his bed, and just wall-to-wall records and books. It was like a mini-library that he was basically living in, just surrounded with music.”

Instead of offering gas money in exchange for the help, Hess pointed to a stack of records and told Trinidad to take ten or twenty and call it good.

“Those records I still have today and I listen to so much,” Trinidad says. “Like some ECM Jan Garbarek records that were out there — some really beautiful stuff — and I was like, ‘Wow, this is better than gas money.’ I still hold on to those treasures that he gave me.”

Trinidad also holds on to a lot of things that Hess taught him, like playing outside of the box and digging into musical theory and composition.

“The way he blended humor and difficult pieces of content, he was able to get us through difficult parts of learning,” Trinidad remembers. “I think that’s what made class so much fun: We would get to this really, like, deep-end stuff with theory, but his humor and the way that he approached his understanding of how those pieces of theory work in music just made it fun. So it was like we couldn’t wait to get to class — like, ‘What’s Fred going to say today?’

“It was unpredictable, actually,” he adds. “Much like his music, I think, was the way he taught. There was this playfulness and unpredictability, but still this level of high intelligence. I felt like that always encompassed him no matter what he did, whether that was a conversation or the way he taught class or played. He was always in that world. He was like that until the day he died.”

Hess was born in Abington, Pennsylvania, in 1944 but grew up in New Jersey and went to Trenton State College before attending the Creative Music Studio in Woodstock in 1979 alongside Art Ensemble of Chicago saxophonist Roscoe Mitchell. Hess, who studied with Phil Woods, moved to Colorado in 1981 and eventually earned his doctorate in musical composition from the University of Colorado. Trumpeter Ron Miles recalls first meeting Hess in 1983, when Hess and his daughter, Tara, were living in student housing in Boulder.

Miles, who was nineteen at the time, would take the bus up to Boulder to play with Hess. He says he and Hess would be “squeaking and squawking” while a teenage Tara stayed in her room, listening to the Police.

Miles would go on to collaborate with Hess many times over the next three decades, both as part of the Boulder Creative Music Ensemble, which Hess formed in 1982, and on his big-band recordings.

Colin Bricker, engineer and owner of Mighty Fine Productions, recorded around a dozen albums with Hess, who he says “looked like an accountant but wearing a plastic Simpson’s toy watch.”

“Fred’s music was challenging, individual and smart,” Bricker says. “He opened the door for so many Denver creatives to make the sounds they imagined, unapologetically. My favorite works were his big-band records — such massive creative endeavors. Some of the best musicians in the world playing music they could barely hang on to at times, and at others sounding like a great classic big band.”

In the liner notes to his 2011 big-band recording Into the Open, Hess wrote that the album represented his love of the traditional big-band ensemble, beginning in the 1950s with the Bill Holman and Gerry Mulligan charts that he listened to as a teenager.

“The CD also included musical allusions and excerpts from other composers that influenced me — Gary McFarland, Thad Jones, Bob Brookmeyer, Rob McConnell, Toshiko Akiyoshi, and even Anthony Braxton, with his forays into the standard jazz ensemble instrumentation,” the liner notes continue. “Into the Open is about continuing this rich musical legacy from the vantage point of looking back and thinking forward. Jazz and classical music has walked a path that now includes the past and the future as one continuum.”

Listening to Hess’s recorded output, it’s clear that the saxophonist had a high regard for the past while keeping an eye on the future.

“He was somebody who just loved music of all stripes and was committed all his life to learning more about styles that maybe he was less familiar with than others, and all the while just maintaining his own really unique, personal voice,” Miles notes.

“I think in a lot of ways, I’m a very different composer than him,” he continues. “He would always joke that I’d always have all these themes in my music, and with one measure he would make a hundred measures, because I’m really a songwriter. But he was a real composer in the tradition of developing material and taking a small thing and making it larger. And he was so great at it. Me? I just write the next note that sounds right to me.

“But I must say, getting to play great music — which, I got to play his music — is just kind of the same as being in an orchestra and getting to play Bartók’s music or Ellington’s music. Just being around that great music lets you know whether what you’re writing is up to snuff or not, because that music is unquestionably great,” Miles adds. “Hopefully these little songs that I write aren’t the same as what Fred would write; I hopefully aspire to that level.”

While Hess composed many pieces using standard notation, he was also known for his graphic scores, particularly his “Feinman Series” of compositions, which Miles says were based on colliding atomic particles.
“He would draw these beautiful artistic structured improvisations,” Miles says. “It would give you something to base your solos on other than chord changes.”

Trinidad remembers being in Hess’s One O’Clock Big Band at Metro and performing a graphic score based on the clef family.

“He wrote a series of how treble clef and bass clef and alto clef are this family, and he would read these stories at our concerts,” Trinidad remembers, “like, ‘Bass clef came home from the store and saw that the house was wrecked.’ And then we would play that. And then he’d be like, ‘He saw his daughter, alto clef, and he went for a walk.’ We’d play that part. Then he would stop us. There was this whole story. The music was just a picture, like a map of the family going on a walk or something, and we would just play this story. And we would all bow afterward. And that was our chart.”

While such projects forced students to get creative, Miles says he knew that when he played on Hess’s album he’d be challenged, and he knew the music would be swinging. Miles also says Hess told him that being an improvising musician is important and can generate positive energy — not only for the audience, but for other musicians and the community.

“He was a real beacon, a real master at improvising,” Miles says. “And those lessons of musicality and deep study were things that I hold to this day — that lifelong enthusiasm. Constant learning, constant teaching is something that holds true for the rest of us as we carry on without him.”
KEEP WESTWORD FREE... Since we started Westword, it has been defined as the free, independent voice of Denver, and we'd like to keep it that way. With local media under siege, it's more important than ever for us to rally support behind funding our local journalism. You can help by participating in our "I Support" program, allowing us to keep offering readers access to our incisive coverage of local news, food and culture with no paywalls.
Make a one-time donation today for as little as $1.