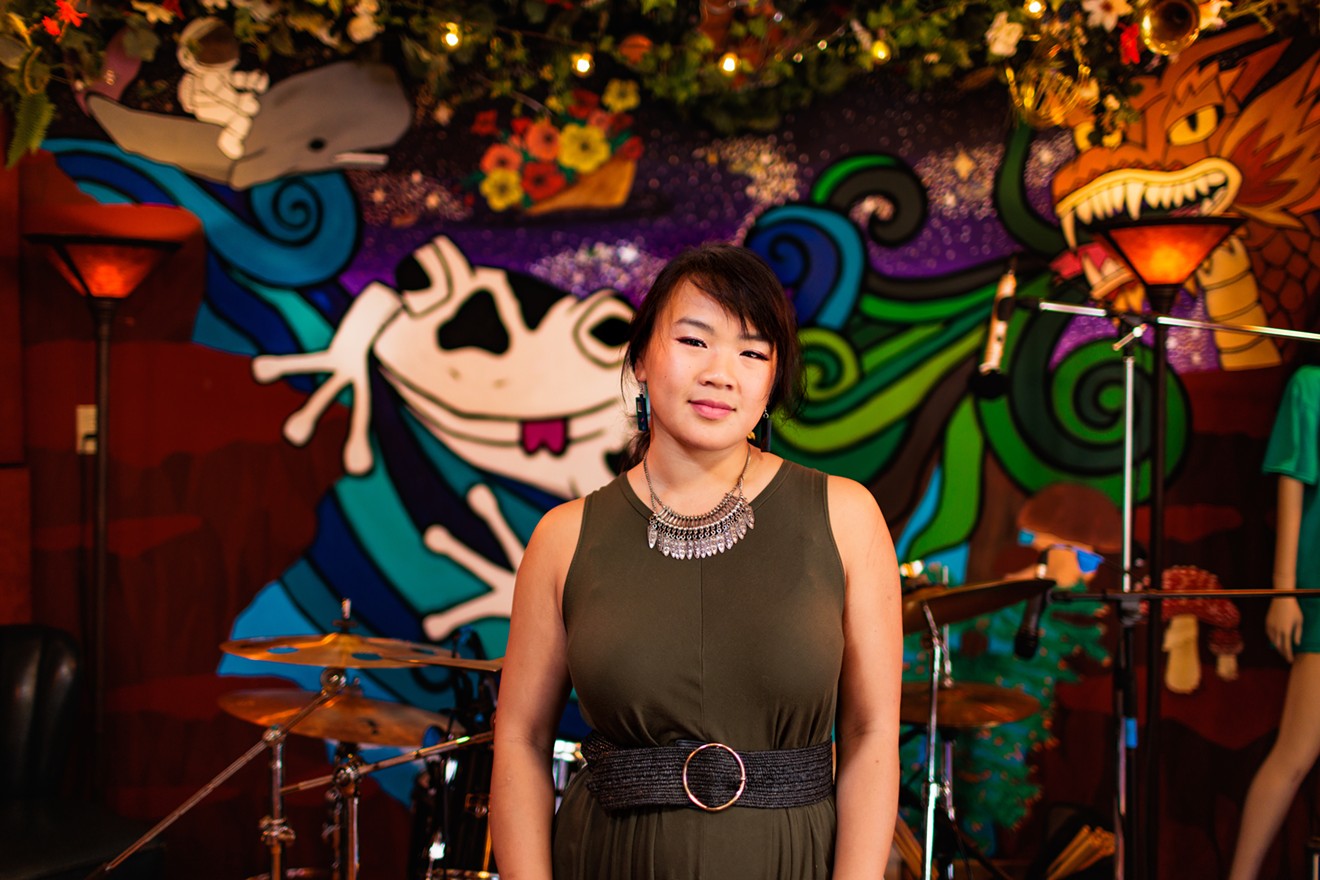 Andrea Hoang, co-founder of the Salt Lick Denver, stands in front of her mural at the collective's new studio. Jason Edelstein
Jason Edelstein and Andrea Hoang co-founded the Salt Lick Denver collective in 2020 with a recording studio and music video production studio, then launched a record label under the same name the following summer. They filmed their bands playing sets on a stage in the collective's basement, known affectionately as the Pond because the building suffered plumbing problems that turned the space, literally, into its namesake.

The Salt Lick continued to grow in popularity, and the gang, which currently includes Edelstein, Hoang, sound engineer Chris Voss and assistant cinematographer and engineer John Baldwin, headed for new digs in November last year. “It was just your standard Capitol Hill rental house,” Hoang says of the former location. “Luckily, we were able to leave that place in favor of a space we could mold. It’s been a lot easier to work in this place.”

The Salt Lick Denver is now located in the Little Saigon district, around South Federal Boulevard, “right where all the best food is,” Hoang says. “It hasn’t been great for our waistbands, but we’ve been eating out a lot.”

In spite of its limitations, the collective made good use of the original location with its DIY live-music series, Songs From the Pond, which is similar to NPR's Tiny Desk Concerts. Hoang painted a mural as a backdrop and used enough decoration to really bring the dungeon-like setting to life. “The response from the community has been really good,” says Edelstein of the series. “It’s really what got us our footing in the Denver music scene.”

Voss agrees that the collective is best known for these video sessions, but adds that the Salt Lick has more to offer, and he’s excited to be at a turning point with the new location. “That is where we started, and it’s part of where we are going, but it’s not the whole story,” he says. “We are reminding people that this is still what we love — filming these sessions for the community and bringing our favorite artists into the spotlight — but also letting people know that we're not operating out of a basement anymore.”
Because unfortunately, as professional as past Pond productions look and sound, there’s only so much you can do with a basement. It’s never the most encouraging place to be invited into — at best, it’s a basement, and at worst, you’ve just found yourself co-starring in a Saw sequel. “It’s a much more attractive-looking studio,” Edelstein says of the new spot. “It’s a much more professional studio, and I think it’s going to be a more attractive offer to bands that are touring or coming through Denver to stop by and check out the space.”

You can get a taste of the new digs in the latest edition of Songs From the Pond, which debuts on Wednesday, November 16, and showcases the neo-soul band Ghost Tapes. The Salt Lick, which currently counts Sponsored Content, John Baldwin and Silver Screen Fantasy among its label artists, spent several months upgrading the recording studio, which has been open for business since April. But the collective sees the upcoming Songs From the Pond release as a sign that the revamp is more or less complete — a grand reopening, if you will.

“We weren’t just taking the year off,” Edelstein says. “We’ve been honing our skills. We were renovating the studio. We purchased nicer equipment. I think it’s really going to show with this one.”

Voss notes that there have been major improvements with the new location, which is also where he lives full-time. “For one, we are now above ground,” he says. “We have full lighting and acoustic treatment in the room. Compared to the cold, dark room of years past, this is a much livelier and better-sounding room.”

Hoang adds that the new space also has plants, air-conditioning and windows; Edelstein says that the plants have survived so far, which he takes as a good omen for recording sessions to come. He concedes that while the lack of oxygen in the old space may have inspired some moments of creative genius, everyone is better off using a studio where they can breathe. “People are spending hours and days on end in that space,” he says. “There’s a lot of oxygen in there, which I think promotes a healthy mindset for recording.”

But some notable remnants of the old Pond came along to the new location, such as a thrifted mannequin that Denver artist N3ptune named Lucy. Hoang also paid tribute to the mural she created in the old basement with a new one that depicts the same psychedelic frog from a different perspective. The ceiling displays a painting of the galaxy, which goes well with the new lighting system. “We’ve got red sound-treatment panels in the studio now that I’ve incorporated in the mural,” Hoang says. “I’ve tried to make that all blend together.”

It’s been a Salt Lick tradition to keep the mural changing a bit each time a new band records a session, and the new space promises to make it easier to keep it evolving from show to show. “It was a little harder with that last space, just with the constraints we were working with,” Hoang says, because the old basement walls were tricky to paint on. “If I painted too much over it, it would just kind of crumble," she explains. "With this space, I’ve got a little more flexibility to continue adding on to it.”

Edelstein notes that the collective has been marketing itself as a recording studio and video production company — an all-around creative agency — in order to bring in more artists from outside the label. The Salt Lick has already released numerous music videos, including entries from soul-tinged indie rockers Bear and the Beasts and dream popsters mlady, both formerly of the Salt Lick record label. The new, more welcoming location will help attract more bands, too. “When bands come in and they want to start working on a new release, not only do they have a place to record it, but they also have a place to create video content for it,” Edelstein says.

Hoang says that since filming the most recent Songs From the Pond session, the collective has released three new music videos and has another one in the works. There have also been open jam sessions on a semi-regular basis, and the group threw a house show this past summer outside on a deck that Hoang built.

“We choose pretty strategically who we want to collaborate with,” Hoang says. “Everyone we’ve worked with so far, we are still in communication with and see pretty regularly, to just kind of fortify that community that we’ve been building.”

She also likes being a good host, so there are usually snacks, cake and other home-cooked food ready to be scarfed by any hungry musicians who might pass through. “I really love having people over,” she says. “I’m very adamant about having a good food spread and just a really welcoming environment.”

Edelstein sees the Salt Lick as more inviting than a traditional recording studio, and feels that events such as open jams are a way for bands to get a feel for the space, especially if they're thinking about booking some recording time.

“They don’t feel the pressure of being in a more traditional recording studio, because it’s a familiar environment,” he says. “They’ve already been here. They’ve already played here. They’ve had really good moments here. When they record with us, they can get their best moments.”

For more information, check out thesaltlickdenver.com.
KEEP WESTWORD FREE... Since we started Westword, it has been defined as the free, independent voice of Denver, and we'd like to keep it that way. With local media under siege, it's more important than ever for us to rally support behind funding our local journalism. You can help by participating in our "I Support" program, allowing us to keep offering readers access to our incisive coverage of local news, food and culture with no paywalls.
Make a one-time donation today for as little as $1.