Dierks Bentley performs at the 2016 NFL Kickoff concert in Denver's Civic Center Park on September 8, 2016. Brandon Marshall
Hold on to your hats, y'all! Summer is right around the bend, signaled in Denver by snowmelt and the opening of Red Rocks Amphitheatre, Colorado’s altar to outdoor music. While it’s the season of eclectic festivals and all-day electronica, fans of arena shows and country music are in luck, with these thirteen major concerts hitting the Denver area this summer.
1. Chris Stapleton's "All American Road Show"
Tuesday, May 23 and Wednesday, May 24
Red Rocks Amphitheatre

After years in the country-music industry as a songwriter, Chris Stapleton barreled into the spotlight last year with his debut album Traveller, which swept the 2016 CMAs and made him a star. Stapleton injects his “classic country” sound with smooth soul and slower tempos, while still moving massive crowds. His new album dropped in early May, and he’ll play two nights at Red Rocks with Brothers Osborne and Lucie Silvas.
2. Tom Petty and the Heartbreakers
Monday, May 29, and Tuesday, May 30
Red Rocks Amphitheatre

Despite Tom Petty's comments in 2013 that country music had become "incredibly generic" and has been "missing that magic element" of the country of yesteryear, contemporary artists can't stop name-checking him in their radio hits, from Tim McGraw to Canaan Smith. Petty even made a best-of list called the CMT All-Time Top 40: Artists Pick as the No. 22 country musician. This year, the Heartbreakers are celebrating the band's fortieth anniversary, and the two-night sold-out stand at Red Rocks should be a huge party.
3. John Mellencamp with Emmylou Harris, Carlene Carter, Lily & Madeleine
Monday, June 5
Fiddler's Green Amphitheatre

Okay, so John Mellencamp is the quintessential heartland rocker, but he's filling out the bill of his summer tour with country crossover heavy hitters. Lily & Madeleine are an up-and-coming folksy sister duo from Mellencamp's part of Indiana, and Carlene Carter is a country-music legacy. Emmylou Harris, who turned seventy this year, continues to put out excellent, eclectic albums with Rodney Crowell.
4. Brad Paisley
Saturday, July 15
Pepsi Center

Brad Paisley released his eleventh studio album, Love and War, in late April, and keeps popping up in those Nationwide Insurance commercials, continuing his reign as one of country's most visible stars. This summer he'll stop by the Pepsi Center with Dustin Lynch and Chase Bryant. 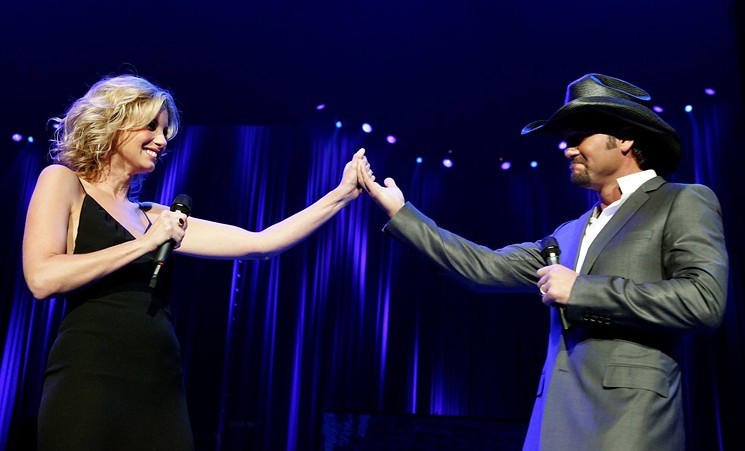 The coupling of Tim McGraw and Faith Hill has been the #RelationshipGoals of the country-music world for twenty years. This year the pair released its first duets album, and they're backing it up with the Soul2Soul World Tour. The country prom king and queen will play two nights at Denver's Pepsi Center.

In 2008, when Darius Rucker made the transition into country music with the single "Don't Think I Don't Think About It," listeners' first reactions were often "Who?" then "Hootie?!" That song eventually made it to the top of the charts, making Rucker the first solo African-American artist to hit number one in country since 1983. Nearly ten years, multiple Grammys and a string of huge hits later, it's hard to imagine a country-music landscape without Rucker and his tremulous baritone voice.

Read on for seven more of the biggest country concerts coming to Denver.